The winner of multiple Hugo and Nebula Awards, Connie Willis capture the timeless essence of generosity and goodwill in this magical collection if Christmas stories.  These eight tales-two of which have never before been published-boldly reimagine the stories of Christmas while celebrating the power of love and compassion.  This enchanting treasury includes:

"Miracle," in which a young woman's carefully devised plans to find romance go awry when her guardian angel shows her the true meaning of love
"In Coppelius's Toyshop," where a jaded narcissist finds himself trapped in a crowded toy store at Christmastime
"Epiphany," in which three modern-day wisemen embark on a quest unlike any they've ever experienced
"Inn," where a choir singer gives shelter to a homeless man and his pregnant wife-only to learn later that there's much more to the couple than meets the eye
And more

An excerpt from Miracle and Other Christmas Stories

I love Christmas. All of it--decorating the tree and singing in the choir and baking cookies and wrapping presents. I even like the parts most people hate--shopping in crowded malls and reading Christmas newsletters and seeing relatives and standing in baggage check-in lines at the airport.

Okay, I lied. Nobody likes standing in baggage check-in lines. I love seeing people get off the plane, though, and holly and candles and eggnog and carols.

But I love Miracle on 34th Street and Christopher Morley's "The Christmas Tree That Didn't Get Trimmed" and Christina Rosetti's poem "Midwinter." My family watches The Sure Thing and A Christmas Story each year, and we read George V. Higgins's "The Snowsuit of Christmas Past" out loud every Christmas Eve, and eagerly look for new classics to add to our traditions.

There aren't a lot. This is because Christmas stories are much harder to write than they look, partly because the subject matter is fairly limited, and people have been writing them for nearly two thousand years, so they've just about rung all the changes possible on snowmen, Santas, and shepherds.

Stories have been told from the point of view of the fourth wise man (who got waylaid on the way to Bethlehem), the innkeeper, the innkeeper's wife, the donkey, and the star. There've been stories about department-store Santas, phony Santas, burned-out Santas, substitute Santas, reluctant Santas, and dieting Santas, to say nothing of Santa's wife, his elves, his reindeer, and Rudolph. We've had births at Christmas (natch!), deaths, partings, meetings, mayhem, attempted suicides, and sanity hearings. And Christmas in Hawaii, in China, in the past, the future, and outer space. We've heard from the littlest shepherd, the littlest wise man, the littlest angel, and the mouse who wasn't stirring. There's not a lot out there that hasn't already been done.

In addition, the Christmas-story writer has to walk a narrow tightrope between sentiment and skepticism, and most writers end up falling off into either cynicism or mawkish sappiness.

And, yes, I am talking about Hans Christian Andersen. He invented the whole three-hanky sob story, whose plot Maxim Gorki, in a fit of pique, described as taking a poor girl or boy and letting them "freeze somewhere under a window, behind which there is usually a Christmas tree that throws its radiant splendor upon them." Match girls, steadfast tin soldiers, even snowmen (melted, not frozen) all met with a fate they (and we) didn't deserve, especially at Christmas.

Nobody, before Andersen came along, had thought of writing such depressing Christmas stories. Even Dickens, who had killed a fair number of children in his books, didn't kill Tiny Tim. But Andersen, apparently hell-bent on ruining everybody's holidays, froze innocent children, melted loyal toys into lumps of lead, and chopped harmless fir trees who were just standing there in the forest, minding their own business, into kindling.

Worse, he inspired dozens of imitators, who killed off saintly children (some of whom, I'll admit, were pretty insufferable and deserved to die) and poor people for the rest of the Victorian era.

In the twentieth century, the Andersen-style tearjerker moved into the movies, which starred Margaret O'Brien (who definitely deserved to die) and other child stars, chosen for their pallor and their ability to cough. They had titles like All Mine to Give and The Christmas Tree, which tricked hapless moviegoers into thinking they were going to see a cheery Christmas movie, when really they were about little boys who succumbed to radiation poisoning on Christmas Eve.

When television came along, this type of story turned into the "Very Special Christmas Episode" of various TV shows, the worst of which was Little House on the Prairie, which killed off huge numbers of children in blizzards and other pioneer-type disasters every Christmas for years. Hadn't any of these authors ever heard that Christmas stories are supposed to have happy endings?

Well, unfortunately, they had, and it resulted in improbably sentimental and saccharine stories too numerous to mention.

So are there any good Christmas stories out there? You bet, starting with the original. The recounting of the first Christmas (you know, the baby in the manger) has all the elements of great storytelling: drama, danger, special effects, dreams and warnings, betrayals, narrow escapes, and--combined with the Easter story--the happiest ending of all.

And it's got great characters--Joseph, who's in over his head but doing the best he can; the wise men, expecting a palace and getting a stable; slimy Herod, telling them, "When you find this king, tell me where he is so I can come and worship him," and then sending out his thugs to try to murder the baby; the ambivalent innkeeper. And Mary, fourteen years old, pondering all of the above in her heart. It's a great story -no wonder it's lasted two thousand years.

Modern Christmas stories I love (for a more complete list, see the end of this book) include O. Henry's "The Gift of the Magi," T. S. Eliot's "Journey of the Magi," and Barbara Robinson's The Best Christmas Pageant Ever, about a church Nativity pageant overrun by a gang of hooligans called the Herdmans. The Herdmans bully everybody and smoke and cuss and come only because they'd heard there were refreshments afterward. And they transform what was a sedate and boring Christmas pageant into something extraordinary.

Since I'm a science-fiction writer, I'm of course partial to science-fiction Christmas stories. Science fiction has always had the ability to make us look at the world from a different angle, and Christmas is no exception. Science fiction has looked at the first Christmas from a new perspective (Michael Moorcock's classic "Behold the Man") and in a new guise (Joe L. Hensley and Alexei Panshin's "Dark Conception").

It's shown us Christmas in the future (Cynthia Felice's "Track of a Legend") and Christmas in space (Ray Bradbury's wonderful "The Gift"). And it's looked at Christmas itself (Mildred Clingerman's disturbing "The Wild Wood").

Connie Willis is a member of the Science Fiction Hall of Fame and a Grand Master of the Science Fiction and Fantasy Writers of America. She has received seven Nebula awards and eleven Hugo awards for her fiction; Blackout and All Clear—a novel in two parts—and Doomsday Book won both. Her other works include Passage, Lincoln’s Dreams, Bellwether, Impossible Things, Remake, Uncharted Territory, To Say Nothing of the Dog, Fire Watch, and Miracle and Other Christmas Stories. Connie Willis lives in Colorado with her family, where she deals with the delights (and the more maddening aspects) of our modern oh-so-connected world on a daily basis. 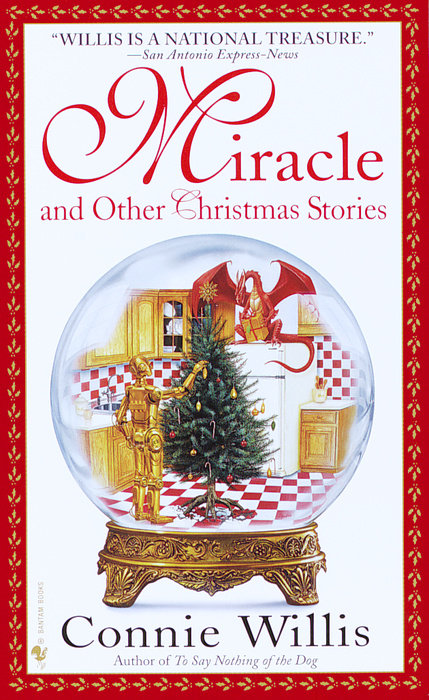