A genre-defining tale of first contact by one of the twentieth century’s most brilliant—and neglected—science fiction and horror writers, whom Stephen King called “the best writer of science fiction that England has ever produced.”

“In my opinion, [John] Wyndham’s chef d’oeuvre . . . a graphic metaphor for the fear of unwanted pregnancies . . . I myself had a dream about a highly intelligent nonhuman baby after reading this book.”—Margaret Atwood, Slate

What if the women of a sleepy English village all became simultaneously pregnant, and the children, once born, possessed supernatural—and possibly alien—powers?

A mysterious silver object appears in quiet, picture-perfect Midwich. A day later, the object is gone—and all the women in the village, they will come to learn, are now pregnant.

The resultant children of Midwich are shockingly, frighteningly other. Faced with these unfathomable and potentially unstoppable children, the question arises: What will humanity do when faced with the threat of the unknown?

An excerpt from The Midwich Cuckoos

No Entry to Midwich

One of the luckiest accidents in my wife’s life is that she happened to marry a man who was born on the 26th of September. But for that, we should both of us undoubtedly have been at home in Midwich on the night of the 26th–27th, with consequences which, I have never ceased to be thankful, she was spared.

Because it was my birthday, however, and also to some extent because I had the day before received and signed a contract with an American publisher, we set off on the morning of the 26th for London, and a mild celebration. Very pleasant, too. A few satisfactory calls, lobster and Chablis at Wheeler’s, Ustinov’s latest extravaganza, a little supper, and so back to the hotel where Janet enjoyed the bathroom with that fascination which other people’s plumbing always arouses in her.

Next morning, a leisurely departure on the way back to Midwich. A pause in Trayne, which is our nearest shopping town, for a few groceries; then on along the main road, through the village of Stouch, then the right-hand turn on to the secondary road for—But, no. Half the road is blocked by a pole from which dangles a notice, road closed, and in the gap beside it stands a policeman who holds up his hand. . . . ​

So I stop. The policeman advances to the offside of the car, I recognize him as a man from Trayne.

“Sorry, sir, but the road is closed.”

“You mean I’ll have to go round by the Oppley Road?”

There is the sound of a horn behind.

“’F you wouldn’t mind backing off a bit to the left, sir.”

Rather bewildered, I do as he asks, and past us and past him goes an army three-ton lorry with khaki-clad youths leaning over the sides.

“Revolution in Midwich?” I inquire.

“Maneuvers,” he tells me. “The road’s impassable.”

“Not both roads surely? We live in Midwich, you know, Constable.”

“I know, sir. But there’s no way there just now. ’F I was you, sir, I’d go back to Trayne till we get it clear. Can’t have parking here, ’cause of getting things through.”

Janet opens the door on her side and picks up her shopping-bag.

“I’ll walk on, and you come along when the road’s clear,” she tells me.

The constable hesitates. Then he lowers his voice.

“Seein’ as you live there, ma’am, I’ll tell you—but it’s confidential like. ’T isn’t no use tryin’, ma’am. Nobody can’t get into Midwich, an’ that’s a fact.”

We stare at him.

“But why on earth not?” says Janet.

“That’s just what they’re tryin’ to find out, ma’am. Now, ’f you was to go to The Eagle in Trayne, I’ll see you’re informed as soon as the road’s clear.”

Janet and I looked at one another.

If one wanted to make a fuss, it was no good making it with him; the man was only doing his duty, and as amiably as possible.

“Very well,” I agreed. “Gayford’s my name, Richard Gayford. I’ll tell The Eagle to take a message for me in case I’m not there when it comes.”

I backed the car further until we were on the main road, and, taking his word for it that the other Midwich road was similarly closed, turned back the way we had come. Once we were the other side of Stouch village I pulled off the road into a field gateway.

“This,” I said, “has a very odd smell about it. Shall we cut across the fields, and see what’s going on?”

“That policeman’s manner was sort of queer, too. Let’s,” Janet agreed, opening her door.

What made it the more odd was that Midwich was, almost notoriously, a place where things did not happen.

Janet and I had lived there just over a year then, and found this to be almost its leading feature. Indeed, had there been posts at the entrances to the village bearing a red triangle and below them a notice:

MIDWICH DO NOT DISTURB

They would have seemed not inappropriate. And why Midwich should have been singled out in preference to any one of a thousand other villages for the curious event of the 26th of September seems likely to remain a mystery for ever.

For consider the simple ordinariness of the place.

Midwich lies roughly eight miles west-northwest of Trayne. The main road westward out of Trayne runs through the neighboring villages of Stouch and Oppley, from each of which secondary roads lead to Midwich. The village itself is therefore at the apex of a road triangle which has Oppley and Stouch at its lower corners; its only other highway being a lane which rolls in a Chestertonian fashion some five miles to reach Hickham which is three miles north.

At the heart of Midwich is a triangular Green ornamented by five fine elms and a white-railed pond. The war memorial stands in the churchward corner of the Green, and spaced out round the sides are the church itself, the vicarage, the inn, the smithy, the post office, Mrs. Welt’s shop, and a number of cottages. Altogether, the village comprises some sixty cottages and small houses, a village hall, Kyle Manor, and The Grange.

The church is mostly perp. and dec., but with a Norman west doorway and font. The vicarage is Georgian; The Grange Victorian; Kyle Manor has Tudor roots with numerous later graftings. The cottages show most of the styles which have existed between the two Elizabeths, but even more recent than the two latest County Council cottages are the utilitarian wings that were added to The Grange when the Ministry took it over for Research.

The existence of Midwich has never been convincingly accounted for. It was not in a strategic position to hold a market, not even across a packway of any importance. It appears, at some unknown time, simply to have occurred; the Domesday survey notes it as a hamlet, and it has continued as little more, for the railway age ignored it, as had the coach roads, and even the navigation canals.

So far as is known, it rests upon no desirable minerals: no official eye ever saw it as a likely site for an aerodrome, or a bombing-range, or a battle school; only the Ministry intruded, and the reconditioning of The Grange had little effect upon the village life. Midwich has—or rather, had—lived and drowsed upon its good soil in Arcadian undistinction for a thousand years; and there seemed, until the late evening of the 26th of September, no reason why it should not so to do for the next millennium, too.

This must not be taken, however, to mean that Midwich is altogether without history. It has had its moments. In 1931 it was the center of an untraced outbreak of foot-and-mouth disease. And in 1916 an off-course Zeppelin unloaded a bomb which fell in a plowed field and fortunately failed to explode. And before that it hit the headlines—well, anyway, the broadsheets—when Black Ned, a second-class highway-man, was shot on the steps of The Scythe and Stone Inn by Sweet Polly Parker, and although this gesture of reproof appears to have been of a more personal than social nature, she was, nevertheless, much lauded for it in the ballads of 1768.

Then, too, there was the sensational closure of the nearby St. Accius’ Abbey, and the redistribution of the brethren for reasons which have been a subject of intermittent local speculation ever since it took place, in 1493.

Other events include the stabling of Cromwell’s horses in the church, and a visit by William Wordsworth, who was inspired by the Abbey ruins to the production of one of his more routine commendatory sonnets.

With these exceptions, however, recorded time seems to have flowed over Midwich without a ripple.

Nor would the inhabitants—save, perhaps, some of the youthful in their brief pre-marital restlessness—have it otherwise. Indeed, but for the Vicar and his wife, the Zellabys at Kyle Manor, the doctor, the district-nurse, ourselves, and, of course, the Researchers, they had most of them lived there for numerous generations in a placid continuity which had become a right.

During the day of the 26th of September there seems to have been no trace of a foreshadow. Possibly Mrs. Brant, the blacksmith’s wife, did feel a trace of uneasiness at the sight of nine magpies in one field, as she afterward claimed; and Miss Ogle, the postmistress, may have been perturbed on the previous night by a dream of singularly large vampire bats; but, if so, it is unfortunate that Mrs. Brant’s omens and Miss Ogle’s dreams should have been so frequent as to nullify their alarm value. No other evidence has been produced to suggest that on that Monday, until late in the evening, Midwich was anything but normal. Just, in fact, as it had appeared to be when Janet and I set off for London. And yet, on Tuesday the 27th . . . 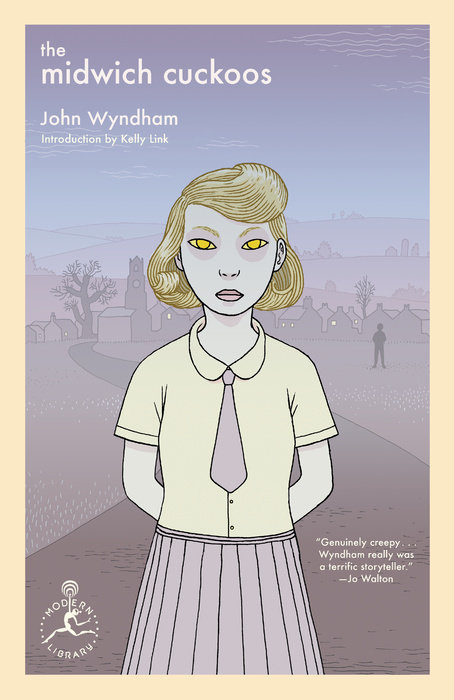