The epic story that began with Heir to the Empire reaches its dramatic conclusion in this essential Star Wars Legends novel.

The embattled Republic reels from the attacks of Grand Admiral Thrawn, who has marshaled the remnants of the Imperial forces and driven the Rebels back with an abominable technology recovered from the Emperor's secret fortress: clone soldiers. As Thrawn mounts his final siege, Han Solo and Chewbacca struggle to form a coalition of smugglers for a last-ditch attack, while Princess Leia holds the Alliance together and prepares for the birth of her Jedi twins.

The Republic has one last hope—sending a small force into the very stronghold that houses Thrawn’s terrible cloning machines. There a final danger awaits, as the Dark Jedi C’baoth directs the battle against the Rebels and builds his strength to finish what he already started: the destruction of Luke Skywalker.

An excerpt from The Last Command: Star Wars Legends (The Thrawn Trilogy)

Gliding through the blackness of deep space, the Imperial Star Destroyer Chimaera pointed its mighty arrowhead shape toward the dim star of its target system, three thousandths of a light-year away. And prepared itself for war.

“All systems show battle ready, Admiral,” the comm officer reported from the portside crew pit. “The task force is beginning to check in.”

“Very good, Lieutenant,” Grand Admiral Thrawn nodded. “Inform me when all have done so. Captain Pellaeon?”

“Sir?” Pellaeon said, searching his superior’s face for the stress the Grand Admiral must be feeling. The stress he himself was certainly feeling. This was not just another tactical strike against the Rebellion, after all—not a minor shipping raid or even a complex but straightforward hit-and-fade against some insignificant planetary base. After nearly a month of frenzied preparations, Thrawn’s master campaign for the Empire’s final victory was about to be launched.

But if the Grand Admiral was feeling any tension, he was keeping it to himself. “Begin the countdown,” he told Pellaeon, his voice as calm as if he were ordering dinner.

“Acknowledged, Chimaera,” Captain Aban nodded, his proper military demeanor not quite masking his eagerness to take this war back to the Rebellion. “Good hunting.”

The holo image sputtered and vanished as the Bellicose raised its deflector shields, cutting off long-range communications. Pellaeon shifted his attention to the next image in line. “Relentless: four point five minutes.”

“Acknowledged,” Captain Dorja said, cupping his right fist in his left in an ancient Mirshaf gesture of victory as he, too, vanished from the hologram pod.

Pellaeon frowned at him. Quarter-sized holos didn’t show a lot of detail, but even so the expression on Brandei’s face was easy to read. It was the expression of a man out for blood.

“This is war, Captain Brandei,” Thrawn said, coming up silently to Pellaeon’s side. “Not an opportunity for personal revenge.”

Thrawn’s blue-black eyebrows lifted slightly. “Do you, Captain? Do you indeed?”

Slowly, reluctantly, some of the fire faded from Brandei’s face. “Yes, sir,” he muttered. “My duty is to the Empire, and to you, and to the ships and crews under my command.”

“Very good,” Thrawn said. “To the living, in other words. Not to the dead.”

Brandei was still glowering, but he gave a dutiful nod. “Yes, sir.”

“Never forget that, Captain,” Thrawn warned him. “The fortunes of war rise and fall, and you may be assured that the Rebellion will be repaid in full for their destruction of the Peremptory at the Katana fleet skirmish. But that repayment will occur in the context of our overall strategy. Not as an act of private vengeance.” His glowing red eyes narrowed slightly. “Certainly not by any Fleet captain under my command. I trust I make myself clear.”

Brandei’s cheek twitched. Pellaeon had never thought of the man as brilliant, but he was smart enough to recognize a threat when he heard one. “Very clear, Admiral.”

“Good.” Thrawn eyed him a moment longer, then nodded. “I believe you’ve been given your launch mark?”

Thrawn looked at Pellaeon. “Continue, Captain,” he said, and turned away.

He finished the list without further incident. By the time the last holo image disappeared, the final check-in from their own task force was complete.

“The timetable appears to be running smoothly,” Thrawn said as Pellaeon returned to his command station. “The Stormhawk reports that the guide freighters launched on time with tow cables functioning properly. And we’ve just intercepted a general emergency call from the Ando system.”

The Bellicose and its task force, right on schedule. “Any response, sir?” Pellaeon asked.

“The Rebel base at Ord Pardron acknowledged,” Thrawn said. “It should be interesting to see how much help they send.”

Pellaeon nodded. The Rebels had seen enough of Thrawn’s tactics by now to expect Ando to be a feint, and to respond accordingly. But on the other hand, an attack force consisting of an Imperial Star Destroyer and eight Katana fleet Dreadnaughts was hardly something they could afford to dismiss out of hand, either.

And that was where those reinforcements would go. Leaving the Empire’s true target ripe for the picking.

Pellaeon looked out the forward viewport at the star of the Ukio system dead ahead, his throat tightening as he contemplated again the enormous conceit of this whole plan. With planetary shields able to hold off all but the most massive turbolaser and proton torpedo bombardment, conventional wisdom held that the only way to subdue a modern world was to put a fast-moving ground force down at the edges and send them overland to destroy the shield generators. Between the fire laid down by the ground force and the subsequent orbital assault, the target world was always badly damaged by the time it was finally taken. The alternative, landing hundreds of thousands of troops in a major ground campaign that could stretch into months or years, was no better. To capture a planet relatively undamaged but with shield generators still intact was considered an impossibility.

That bit of military wisdom would fall today. Along with Ukio itself.

“Good.” Thrawn consulted his chrono. “Seven minutes, I think, and we’ll be able to move.” His lips compressed, just noticeably. “I suppose we’d better confirm that our exalted Jedi Master is ready to do his part.”

Pellaeon hid a grimace. Joruus C’baoth, insane clone of the long-dead Jedi Master Jorus C’baoth, who a month ago had proclaimed himself the true heir to the Empire. He didn’t like talking to the man any more than Thrawn did; but he might as well volunteer. If he didn’t, it would simply become an order. “I’ll go, sir,” he said, standing up.

“Thank you, Captain,” Thrawn said. As if Pellaeon would have had a choice.

He felt the mental summons the moment he stepped beyond the Force-protection of the ysalamiri scattered about the bridge on their nutrient frames. Master C’baoth, clearly, was impatient for the operation to begin. Preparing himself as best he could, fighting against C’baoth’s casual mental pressure to hurry, Pellaeon made his way down to Thrawn’s command room.

The chamber was brightly lit, in marked contrast to the subdued lighting the Grand Admiral usually preferred. “Captain Pellaeon,” C’baoth called, beckoning to him from the double display ring in the center of the room. “Come in. I’ve been waiting for you.” 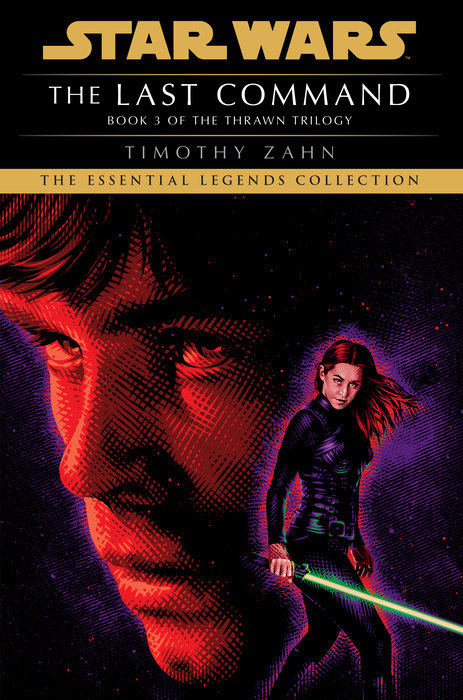