AN ELITE FIGHTING FORCE UNLIKE THE WORLD HAS EVER SEEN . . .

Scouring the darkest corners of the Highlands and Western Isles, Robert the Bruce handpicks ten warriors to help him in his quest to free Scotland from English rule. They are the best of the best, chosen for their superior skills in each discipline of warfare. And to lead his secret Highland Guard, Bruce chooses the greatest warrior of all.

The ultimate Highland warlord and a swordsman without equal, Tor MacLeod has no intention of being drawn into Scotland’s war against the English. Dedicated to his clan, the fiercely independent chief answers to no one—especially not to his alluring new bride, bartered to him in a bid to secure his command of the deadliest fighting force the world has ever seen. The treacherous chit who made her way to Tor’s bed may have won his hand, but she will never claim his heart.

Although her husband’s reputation is as fierce as his manner, Christina Fraser believes that something softer hides beneath his brutal shell. But the only warmth she feels is in their bed, in glorious moments of white-hot desire that disappear with the dawn. When Christina’s reckless bid to win her husband’s love goes awry and thrusts them into danger on the eve of war, Tor will face his ultimate battle: to save his wife and to open his heart—before it’s too late.

An excerpt from The Chief

“The “greatest hero of his race”
—I. F. Grant, on Tormod MacLeod

He was going to kill him. Slowly.

A sharp hush fell over the hall, like the expectant quiet following a loud crack of thunder, as the clerk finished reading the missive. The score of warriors gathered around the great hall of Dunvegan Castle stood stone still, awaiting his response. In their fierce visages he saw the outrage and shock that he shared but masked beneath a stony façade.

Alone on the dais, Tormod MacLeod, Chief of MacLeod, leaned forward in his seat, his gaze piercing the unfortunate man before him. “He did what?” The dead calm of his voice did nothing to dispel the tension.

The clerk startled, emitting what could only be described as a squeak. The missive flew out of his hand and floated through the smoky air to land on the rush-strewn floor. Tor clomped his foot down on the offending scrap of parchment. As he reached down to pick it up, beneath his heel he could just make out the familiar scrawl: Torquil MacLeod, his younger-by-two-minutes twin brother.

Barely had the fires died from the recent attack on the village, and now his brother did this? Slowly, he vowed again, crumpling the missive into a tight ball.

The clerk managed to find his voice, though it shook as he answered Tor’s question. “Y-y-your b-brother states that he cannot ab-b-ide the Nicolson chief’s refusal of his daughter’s hand in marriage and has been forced to take matters into his own hands.” The young churchman paused, wiping the sweat beading from his brow with the back of his hand. “He s-says his love—”

“Enough!” Tor’s fist landed with a resounding thud on the arm of the carved wooden throne, in a rare break of temper. His eyes blared red as rage surged through his veins. “I’ve. Heard. Enough.”

Love. Of all the most asinine justifications for acting like an idiot. He would rather Torquil use the excuse that Margaret Nicolson was a great heiress—which she was—and that he’d carried her off for the betterment of the clan; at least then Tor might attempt to comprehend this egregious lapse in judgment.

With one rash act Torquil was going to start a war, jeopardizing all that Tor had fought to achieve over the past twenty years. Twenty years ago, his clan had been on the brink of destruction—first from the massacre that had claimed the lives of many of his clansmen, including his parents, and then from years of famine. But with hard work and determination he’d brought them back. The clan was once again strong and prosperous. The last thing he wanted was to see it all destroyed by war. An odd position for a man who knew nothing else—who’d made his name and fortune from it—but his clan deserved peace and he intended to give it to them.

The recent spate of attacks was bad enough. Twice in the last year men had come at night to reive cattle, plunder the crops, and burn the fields. It was just the kind of cowardly act favored by the MacRuairis. If they’d broken the truce, Tor would make sure they paid.

But he had to deal with the more immediate threat first. Somehow he’d have to find a way to appease Nicolson and stave off a war. His mouth tightened into a grim line. He was half tempted to drag his brother in chains to Nicolson himself. That might appease him.

He’d be damned if he’d be Hector to Torquil’s lovesick Paris and allow his clan to suffer the fate of the Trojans. There were many reasons to fight a war, but a woman was not one of them.

He and his brother were much alike—or so he’d thought. Where in Hades was Torquil’s sense of duty and loyalty to his clan? He made a sound of disgust. Forgotten in the rush of blood between his legs, no doubt.

Tor forced his anger to cool. He didn’t lose control. Not that you would know it by the shaking of the obviously terrified man before him.

Tor’s gaze narrowed beneath the heavy weight of his brow, taking in the young churchman. John, he thought, was his name. The clerk wasn’t the type of man to make much of an impression. Of medium height and slight build, with straight brown hair cut in an arch around a smooth, unscarred face, and regular if nondescript features, he appeared perfectly suited to his profession. His thin arms were built for lifting a quill, not a sword.

Tor reserved his fighting for worthy opponents on the battlefield. Torquil would feel the lash of his anger, not this whelp. What satisfaction was there in stomping a mouse? Men who beat the weak—be it servants, children, or women—only shamed themselves.

As the clerk was new, Tor would forgive him the offense. This time. “Stop shaking, man,” he snapped. “I’m not going to cut out your tongue for being the bearer of ill news.”

Rather than looking reassured, however, the clerk seemed to turn an even sicklier shade of gray. Churchmen, Tor thought with disgust. For all their learning, they were delicate creatures. But he had no patience for subtlety. The clerk had best toughen his hide. And if he didn’t, he could be replaced.

“Where is my brother now?”

The clerk shook his head, his prominent Adam’s apple bobbing. “I don’t know, Chief. The messenger left before anyone could question him.”

If Torquil had one wit of sense he had taken his stolen bride and sailed to perdition—which was about the only place Tor would not follow him.

Murdoch, his henchman and captain of his guard, stepped forward, the first of his men to speak. It was not fear that kept the guardsmen silent, but respect for Tor’s judgment. Judgment he rendered alone.

“I’ll find him, ri tuath. Most likely he’ll have gone to Ireland or the Isle of Man.”

Tor had come to much the same conclusion himself. His brother—like the rest of them—had spent a large portion of the past twenty years as a gallowglass mercenary in Ireland. Sending fighting men to Ireland was one of the ways Tor had been able to restore the fortunes of his clan. He and his men knew Ireland almost as well as they knew Skye.

He nodded. “Take as many men as you need.” He gave Murdoch a meaningful look. “My brother had best hope you find him before Nicolson does.”

“And if he objects to returning?” Murdoch asked bluntly.

No one would question him if he authorized deadly force—despite Torquil’s popularity among the men. The chief’s word was law. His mouth fell in a hard line, tempted to do just that. But as always, he kept his thoughts to himself. “Tell him it’s a direct order from his chief.” Something not even his pig-headed brother would refuse.

He wished he’d thought to forbid him. After the trouble caused by their sister Muriel’s abduction, he’d assumed Torquil would know better. But he should have anticipated something when the negotiations fell through, and Nicolson announced a betrothal between his daughter and MacDougall’s son instead.

Hell. MacDougall would have to be recompensed, and knowing the greedy bastard, it was going to cost him.

Tor tossed the balled letter into the fire in the middle of the hall and dismissed the clerk with a curt wave of his hand. Though the churchman looked anxious to scamper away and retreat to the safety of his books and papers, he didn’t move—other than to shift back and forth on his feet anxiously.

The clerk’s temerity had begun to grate. “If you’ve something else to say, say it or return to your duties.”

“Yes, Chief. I’m sorry, Chief.” The clerk retrieved a folded piece of parchment from the pouch he wore tied around his brown woolen robes. “This came only a short while ago.” He handed it over to Tor for his inspection.

Tor examined the wax and took immediate note of the seal with the familiar four men in a birlinn. Angus Og MacDonald, Ri Innse Gall. He lifted a brow, amused. MacDonald was a bold one, using the old title of King of the Isles instead of Lord of Islay. A title with which King Edward just might disagree.

What did the “King of the Isles” want with him?

He broke the seal, scanned the letter, and handed it back to the young churchman. Though he could read some Gaelic, he did not have the proficiency of the clerk. Like most of the West Highland chiefs, he employed men for such tasks.

The clerk began to read. It took him a while to get through the extended greeting—Tormod son of the same, son of Leod, son of Olaf the Black, King of Man, son of Harald Hardrada, King of Norway—but eventually it became clear that MacDonald was sending out a summons to the island chiefs to attend a council at Finlaggan, his stronghold on Islay.

What wasn’t clear was why he’d summoned Tor. He didn’t answer to MacDonald. Skye had never been part of MacDonald’s dominion. Blood every bit as royal as MacDonald’s flowed through Tor’s veins. Not since his uncle Magnus, the last King of Man, had sat upon the throne had the MacLeods bowed to anyone.

Monica McCarty is the bestselling author of The Arrow, The Raider, The Hunter, the Highlander trilogy, the Campbell trilogy, and more. Her interest in the Scottish clan system began in the most unlikely of places: a comparative legal history course at Stanford Law School. After a short but enjoyable stint as an attorney, she realized that her career as a lawyer paired with her husband’s transitory life as a professional baseball player was not the best match. So she traded in her legal briefs for Scottish historical romances with sexy alpha heroes. She now lives in the San Francisco Bay Area with her husband and their two children. 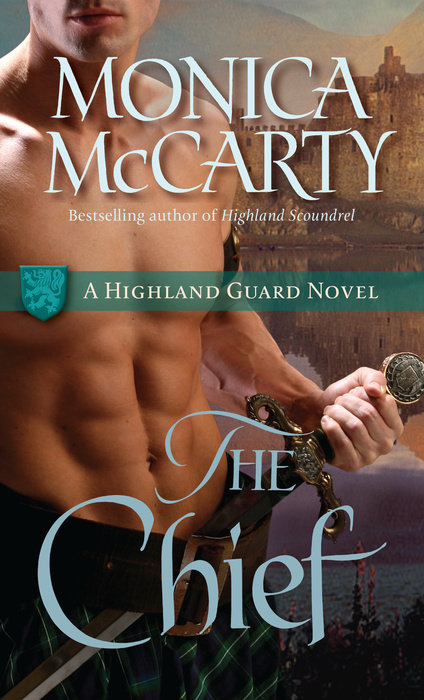