THE LEGEND OF THE HIGHLAND GUARD CONTINUES. . . .

Handpicked by Robert the Bruce to help him in his quest to free Scotland from English rule, the elite warriors of the Highland Guard face their darkest days. When Bruce is forced to flee, his bid for freedom rests on the shoulders of one extraordinary warrior.

Erik MacSorley is a brilliant seafarer who has never encountered a wind he could not harness or a woman he could not win—until he drags a wet, half-naked “nursemaid” out of the waters off the Irish coast. Ellie’s ordinary appearance belies the truth: She is in fact Lady Elyne de Burgh, the spirited daughter of the most powerful noble in Ireland.

Worse, this irresistible woman is determined to prove herself immune to Erik’s charms—a challenge he cannot resist. Her captor may look every inch a rugged warrior, but Ellie vows that it will take more than a wickedly suggestive caress to impress her. Yet Erik will sweep away Ellie’s resistance with a desire that resonates deep within her heart. Still, he is a man driven by loyalty, and she is a woman with secrets that could jeopardize Bruce’s chance to reclaim his throne. As the battle for king and country sounds across the shores, will Ellie’s love be enough to finally tame the legend known as the Hawk?

An excerpt from The Hawk

Rathlin Sound, off the north coast of Ireland

Erik MacSorley never could resist a challenge, even an unspoken one. One glimpse of the fishing boat being pursued by the English galley and he knew tonight would be no different.

What he should do was ignore it and continue on his mission, slipping undetected past the English patrol ship on his way to Dunluce Castle to meet with the Irish mercenaries.

But what fun would there be in that?

After over four months of hiding and hopping from island to island with nothing more than a brief foray to the mainland to collect Bruce’s rents and the occasional reconnaissance mission, Erik and his men deserved a wee bit of excitement.

He’d been as good as a monk at Lent (except for the lasses, but Erik sure as hell hadn’t taken a vow of chastity when he joined Bruce’s Highland Guard), staying out of trouble and exercising unnatural restraint the few times he’d been called to action since the storm and their escape from Dunaverty. But with Devil’s Point practically in pissing distance, a high tide, and a strong wind at his back, it was too tempting an opportunity to let go by.

At nine and twenty, Erik had yet to meet a wind he could not harness, a man who could best him on or in the water, a boat he could not outmaneuver, or, he thought with a devilish grin, a woman who could resist him.

Tonight would be no different. The heavy mist made it a perfect night for a race, especially since he could navigate the treacherous coast of Antrim blind.

They’d just skirted around the northwest corner of Rathlin Island, on their way south to Dunluce Castle on the northern coast of Ireland, when they caught sight of the English patrol boat near Ballentoy Head. Ever since the English had taken Dunaverty Castle earlier this month and realized Bruce had fled Scotland, the enemy fleet had increased their patrols in the North Channel hunting the fugitive king.

But Erik didn’t like seeing a patrol boat this close to his destination. The best way to ensure the English didn’t interfere with his plans was to put them someplace they couldn’t give him any trouble. Besides, from the looks of it, the fishermen could use a little help.

English bastards. The treacherous murder of MacLeod’s clansmen was still fresh in his mind. And they called him a pirate.

He gave the order to raise the sail.

“What are you doing?” Sir Thomas Randolph sputtered in a hushed voice. “They’ll see us.”

Erik sighed and shook his head. Bruce owed him. Acting nursemaid to the king’s pompous nephew was not what he’d signed up for. The king might have to add a castle or two to the land in Kintyre he’d promised to restore to him when Bruce reclaimed his crown and kicked Edward Longshanks back to England.

Randolph was so steeped in the code of chivalry and his knightly “duties” that he made Alex Seton—the sole knight (and Englishman) among the elite Highland Guard—seem lax. After two months of “training” Randolph, Erik had new respect for Seton’s partner Robbie Boyd. Erik had heard enough about rules and honor to last him a bloody lifetime. Randolph was beginning to wear on even his notoriously easygoing nature.

Erik arched a brow with exaggerated laziness. “That’s rather the point if we’re going to draw them away.”

“But damn it, Hawk, what if they catch us?” Randolph said, calling Erik by his nom de guerre—his war name.

When on a mission, war names were used to protect the identities of the Highland Guard, but as a seafarer Erik had no choice but to involve others. He needed men to man the oars, and with the other members of the Highland Guard scattered, he’d turned to his own MacSorley clansmen. The handful of men who’d accompanied Erik on this secret mission were his most trusted kinsmen and members of his personal retinue. They would protect his identity to the death.

Thus far, the infamous “Hawk” sail had not been connected with the rumors spreading across the countryside of Bruce’s phantom army, but he knew that could change at any moment.

The oarsmen in hearing distance of Randolph laughed outright at the absurdity.

“I haven’t lost a race in…” Erik turned questioningly to his second-in-command, Domnall, who shrugged.

“See there,” Erik said to Randolph with an easy grin. “There’s nothing to worry about.”

“But what about the silver?” the young knight said stubbornly. “We can’t risk the English getting their hands on it.”

The coin—fifty pounds’ worth—they carried was needed to secure the mercenaries. Small scouting parties had collected it over the winter months from Bruce’s rents in Scotland. The nighttime forays had only added to the growing rumors of Bruce’s phantom guard. MacSorley and some of the other guardsmen had been able to slip in and out of Scotland undetected thanks to key intelligence leaked from the enemy camp. Erik suspected he knew the source.

Bruce hoped to triple the size of his fighting force with mercenaries. Without the additional men, the king wouldn’t be able to mount the attack on the English garrisons occupying Scotland’s castles and take back his kingdom.

It was Erik’s job to get them there. With the time of the attack approaching, Bruce was counting on him to secure the mercenaries and get them past the English fleet to Arran in time for the attack scheduled for the fifteenth—less than two weeks away.

“Relax, Tommy, lad,” Erik said, knowing full well that the nobleman with the sword firmly wedged up his arse would only be antagonized further by the admonition. “You sound like an old woman. The only thing they’ll catch is our wake.”

Randolph’s mouth pursed so tightly his lips turned white, in stark contrast to his flushed face. “It’s Thomas,” he growled, “Sir Thomas, as you bloody well know. Our orders were to secure the mercenaries and arrange for them to join my uncle, without alerting the English patrols of our presence.”

It wasn’t quite that simple, but only a handful of people knew the entire plan, and Randolph wasn’t one of them. They weren’t arranging to have the mercenaries meet Bruce, they only were arranging the next meeting.

It was safer that way. For Bruce to have any chance against the formidable English army, it was imperative that they have surprise on their side.

After years of serving as a gallowglass mercenary in Ireland, Erik knew that it was wise to be cautious with information. Coin was the only loyalty most mercenaries honored, and the McQuillans were a rough lot—to put it mildly.

The king would not trust them with details of their plan until he had to, including both the location of the rendezvous and when and where they planned to attack. Erik would meet the Irish two nights before the attack, and then personally escort them to Rathlin to rendezvous with Bruce to assemble the army. The next night Erik would lead the entire fleet to Isle of Arran, where Bruce planned to launch the northern attack on the Scottish mainland set for the 15th of February.

The timing was imperative. The king had divided his forces for a two-pronged attack. Bruce would attack at Turnberry, while his brothers led a second attack on the same day in the south at Galloway.

With the timing so tight, and since they could travel only at night, there was no margin for error.

“I don’t want any surprises, Tommy. This way we’ll make sure of it.”

Nothing would interfere with his mission, but they could have a little fun doing it.

Erik shook his head. The lad really was hopeless. “Now, Tommy, don’t go throwing around words you don’t understand. You wouldn’t know reckless if it came up and bit you in the arse. It’s reckless only if there is a chance they’ll catch us, which—as you’ve already heard—they won’t.”

His men hoisted the square sail. The heavy wool fibers of the cloth coated with animal fat unfurled with a loud snap in the wind, revealing the fearsome black sea hawk on a white-and-gold striped background. The sight never ceased to send a surge of excitement pumping through his veins.

A few moments later he heard a cry go up across the water. Erik turned to his disapproving companion with an unrepentant grin. “Looks like it’s too late, lad. They’ve spotted us.” He took the two guide ropes in his hands, braced himself for the gust of wind, and shouted to his men, “Let’s give the English dogs something other than their tails to chase. To Benbane, lads.”

The men laughed at the jest. To an Englishman, “tail” was a hated slur. Bloody cowards.

The sail filled with wind, and the birlinn started to fly, soaring over the waves like a bird in flight, giving proof to the Hawk’s namesake emblazoned on the sail and carved into the prow of his boat.

Monica McCarty is the bestselling author of The Arrow, The Raider, The Hunter, the Highlander trilogy, the Campbell trilogy, and more. Her interest in the Scottish clan system began in the most unlikely of places: a comparative legal history course at Stanford Law School. After a short but enjoyable stint as an attorney, she realized that her career as a lawyer paired with her husband’s transitory life as a professional baseball player was not the best match. So she traded in her legal briefs for Scottish historical romances with sexy alpha heroes. She now lives in the San Francisco Bay Area with her husband and their two children. 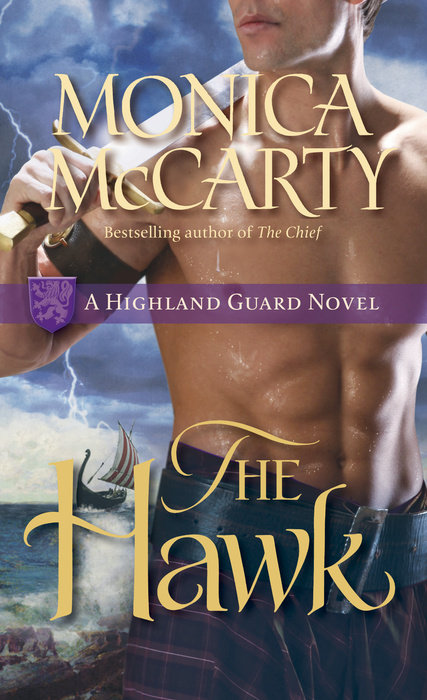