“A masterpiece for every woman who has an interest in her body, her mind, and her soul.”—Caroline Myss, Ph.D., author of Anatomy of the Spirit

“I recommend Women’s Bodies, Women’s Wisdom to all women and also to all men who want to understand and nourish the women in their lives.”—Deepak Chopra, M.D., author of Ageless Body, Timeless Mind

Fully revised and updated to include the very latest treatment innovations and research data, and reflecting today’s woman’s proactive involvement in her own health care, this important new edition will help women everywhere enjoy vibrant health with far fewer medical interventions. Filled with dramatic case histories, Women’s Bodies, Women’s Wisdom is contemporary medicine at its best, combining new technologies with natural remedies and the miraculous healing powers within the body itself.

Introduction to the Fifth Edition

The Medicine of Empowerment

The female body was designed by our Creator to be a source of pleasure, fertility, movement, strength, and well-being. Our bodies connect us with the moon, the tides, and the seasons. They are the temples within which our souls dwell and experience life on earth. And they are profoundly impacted first and foremost by our beliefs about what is possible, by the culture in which we live, and then by the behaviors that stem from these beliefs. If you believe that it is a woman’s lot in life to suffer and sacrifice, this will greatly influence your well-being. On the other hand, if you cherish your body and care for it well, you’ll have the tools to be healthy. Each and every one of us has the capacity to flourish within a physical body. I suspected this when I wrote the first edition of Women’s Bodies, Women’s Wisdom in the early 1990s. Now, almost thirty years later, I have proved it to myself not only personally but also in the thousands of lives I have had the privilege to influence. And there is more research than ever before proving the unity of mind, body, and spirit. More than that, we now know how to take this research and apply it to our own lives to influence our health.

We, the human race, have now come to a crossroads, a turning point, when old, unsustainable ideas and behaviors are breaking down all over the planet. For example, the revelations about the Hollywood mogul Harvey Weinstein and his thirty-plus years of sexual abuse of countless women struck a deep chord within me when the news erupted. Not because this kind of abuse of power was anything new—I have witnessed the health effects of this for decades—but because, for the very first time in my lifetime, our society was no longer protecting a rich and powerful sexual predator, and neither was his wife or the mainstream media. It turned out that this was just the beginning of a huge cultural shift that we’ve been building toward for decades. Following the Weinstein scandal, countless other women and men came forth with their own stories of sexual abuse. And the careers of many famous and powerful men—cultural icons, really—ended overnight. I was stunned. How and why did this happen? Because women have finally become strong enough and empowered enough collectively to risk telling the truth. And instead of backing down, we are rising in support. The tide is really turning. And now it needs to turn when it comes to our healthcare.

Back in the 1980s, when I was starting out in my medical practice, I saw the toll that silence and abuse take on women’s bodies. I noticed that many women with conditions such as chronic pelvic pain had been sexually abused. My colleagues denied this and told me my patients were “crazy” and that they only saw “normal” women. I persisted in telling the truth. And it cost me, just as it has cost every whistleblower and rape victim who has ever come forward and rocked the boat, because up until now, our society has been ruled by a belief system known as patriarchy—the rule of the fathers. And those who have challenged it have often paid dearly.

But that is all changing. Quickly. My observations have now become mainstream, and we have the data to support them. Long ago, Sonia Johnson, author of From Housewife to Heretic, wrote, “Women are rising like yeast all over the planet.” And that yeast has just taken a quantum leap.

The current healthcare crisis is another example of this breakdown to breakthrough—an example with which I’m intimately familiar. You truly cannot create sustainable health through more prescription drugs, more disease screening, and more surgeries, all of which are the mainstay solutions of modern medicine. That’s why there is no need to fear the crumbling of the old medical establishment, for this crumbling opens a space for the creation of new, more sustainable, and healthier systems and ideas in all aspects of the human experience on earth, including how we handle the experience of living in a female body.

Over the past four decades, my experiences as an ob-gyn physician, mother, midlife woman, and now grandmother have led me to put forth a revolutionary new approach to women’s health and wellness that acknowledges the seamless unity of our bodies, minds, and spirits. Though this still isn’t obvious within mainstream medicine, it is now abundantly clear that a woman’s state of health is highly influenced by the culture in which she lives, her position within it, her experiences, and her day-to-day thoughts, beliefs, and behaviors.

It is possible to thrive in a female body instead of simply waiting for disease to happen. It boils down to this: Regardless of our individual circumstances, our pasts, or our ages, each of us has inner guidance available that we can tune in to in order to create vibrant health—now. Inner guidance is a second spiritual (and energetic) system that can override and influence physical reality. It is an innate intelligence that operates within us, one that we can learn to access in order to heal. It is the part of us that is capable of creating a spontaneous remission. We are born with this inner guidance, which comes in the form of the emotions and desires that lead us toward things (including thoughts) that feel good and are good for us, and away from things that feel bad and are bad for us. It is influenced by our conscious intent to be well. It’s that simple. We are hardwired to seek love, joy, fulfillment—and health. Though we’ve too often been talked out of our desires as children, I’ve learned that we can trust those feelings that make us want to get up in the morning. Our desires are the way that the healing life force comes through us and replenishes our bodies. They are what make life worth living. They make up our hopes and dreams. And they invariably hold the keys to healing not only our bodies but also our entire lives.

As a physician, I’ve seen time and time again how our inner guidance also comes in the form of bodily symptoms and illnesses—especially when we are living lives devoid of pleasure, joy, and hope. Our illnesses are designed to stop us in our tracks, make us rest, and bring our attention back to the things that are really important and that give our lives meaning and joy—aspects of life we often put on the back burner until “someday.”

The insights catalyzed by decades of medical practice as well as my own health problems challenged everything I learned in medical school and residency training about women’s health. Over the years, it became abundantly clear to me that premenstrual syndrome (PMS), pelvic pain, fibroid tumors, chronic vaginitis, breast problems, and menstrual cramps were related to the contexts of an individual woman’s life and her beliefs about herself and what she thought was possible in her life. All of these factors are associated with very real biochemical changes in our cells. Learning about their diets, work situations, and relationships often provided me with clues to the source of women’s distress—and, more important, what steps needed to be taken to relieve that distress. Over the years, I have learned to appreciate the thoughts, beliefs, and behavioral patterns behind medical conditions in ways that simply aren’t addressed in medical training. These insights are the missing link to optimal health on all levels.

As I have developed more sensitivity to these patterns of health and illness, I have come to the conclusion that without a commitment to looking at all aspects of our lives and accessing our power to change them, improving habits and diet alone is not enough to effect a permanent cure for conditions that have been present for a long time. I’ve worked with many women whose illnesses could not be ascribed simply to what they eat and could not be cured solely through medication or surgery. Following a special diet or running three miles a day won’t make a woman feel well if her health is being adversely influenced by a subconscious belief that she isn’t good enough, or that she is the wrong gender, or that it’s a woman’s lot in life to suffer. Or if she is living with a personality-disordered person who lacks empathy—individuals I refer to as energy vampires. If she has experienced incest and hasn’t allowed herself to feel the emotions that are often associated with that history, or if she was unwanted or abused as a child, then no prescription drugs exist that will heal that wound and the physical aftereffects that often result.

Christiane Northrup, M.D., is the host of eight public television specials and the author of numerous books, including the New York Times bestsellers Women's Bodies, Women's Wisdom and Goddesses Never Age. A board-certified OB/GYN, Dr. Northrup has been featured on The Oprah Winfrey Show, The View, the Today Show, and Good Morning America, among many others. 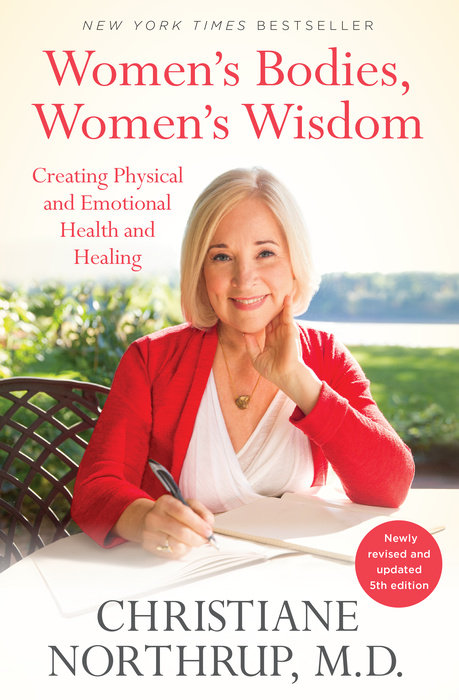