In England’s young silent-film industry, the megalomaniacal Randolph Fflytte is king. But rumors of criminal activities swirl around his popular movie studio. At the request of Scotland Yard, Mary Russell travels undercover to the set of Fflytte’s latest cinematic extravaganza, Pirate King. Based on Gilbert and Sullivan’s The Pirates of Penzance, the project will either set the standard for moviemaking for a generation . . . or sink a boatload of careers.

As the company starts rehearsals in Lisbon, the thirteen blond-haired, blue-eyed actresses whom Mary is chaperoning meet the swarm of real buccaneers Fflytte has recruited to provide authenticity. But when the crew embarks for Morocco and the actual filming, Russell senses ominous currents of trouble: a derelict boat, a film crew with many secrets, decks awash with budding romance—and now the pirates are ignoring Fflytte and answering only to their outlaw leader. Where can Sherlock Holmes be? As movie make-believe becomes true terror, Russell and Holmes themselves may experience a final fadeout.

Ruth: I did not catch the word aright, through being hard of hearing...I took and bound this promising boy apprentice to a pirate.

"You want me to go and work for pirates."

O'er the glad waters of the dark blue sea, our thoughts as boundless, and our souls as free...

"My dear Holmes, someone your age should not be overlooking incipient dementia. Why do you wish me to go and work for pirates?"

"Think of it as an adventure, Russell."

"May I point out that this past year has been nothing but adventure? Ten back-to-back cases between us in the past fifteen months, stretched over, what, eight countries? Ten, if one acknowledges the independence of Scotland and Wales. What I need is a few weeks with nothing more demanding than my books."

"You should, of course, feel welcome to remain here."

The words seemed to contain a weight beyond their surface meaning. A dark and inauspicious weight. A Mariner's albatross sort of a weight. I replied with caution. "This being my home, I generally do feel welcome."

"Ah. Did I not mention that Mycroft is coming to stay?"

"Mycroft? Why on earth would Mycroft come here? In all the years I've lived in Sussex, he's visited only once."

"Twice, although the other occasion was while you were away. However, he's about to have the builders in, and he needs a quiet retreat."

"He can afford an hotel room."

"This is my brother, Russell," he chided.

Yes, exactly: my husband's brother, Mycroft Holmes. Whom I had thwarted-blatantly, with malice aforethought, and with what promised to be heavy consequences-scant weeks earlier. Whose history, I now knew, held events that soured my attitude towards him. Who wielded enormous if invisible power within the British government. And who was capable of making life uncomfortable for me until he had tamped me back down into my position of sister-in-law.

Fourteen days: 336 hours: 20,160 minutes, of first-hand opportunity to revenge himself on me verbally, psychologically, or (surely not?) physically. Mycroft was a master of the subtlest of poisons-I speak metaphorically, of course-and fourteen days would be plenty to work his vengeance and drive me to the edge of madness.

And only the previous afternoon, I had learnt that my alternate lodgings in Oxford had been flooded by a broken pipe. Information that now crept forward in my mind, bringing a note of dour suspicion.

No, Holmes was right: best to be away if I could.

Which circled the discussion around to its beginnings.

"Why should I wish to go work with pirates?" I repeated.

"You would, of course, be undercover."

"Naturally. With a cutlass between my teeth."

"I should think you would be more likely to wear a night-dress."

"A night-dress." Oh, this was getting better and better.

"As I remember, there are few parts for females among the pirates. Although they may decide to place you among the support staff."

"Pirates have support staff?" I set my tea-cup back into its saucer, that I might lean forward and examine my husband's face. I could see no overt indications of lunacy. No more than usual.

He ignored me, turning over a page of the letter he had been reading, keeping it on his knee beneath the level of the table. I could not see the writing-which was, I thought, no accident.

"I should imagine they have a considerable number of personnel behind the scenes," he replied.

"Definitely the cutlass rather than the pen. Although Gilbert might have argued for the literary element."

"Gilbert?" Two seconds later, the awful light of revelation flashed through my brain; at the same instant, Holmes tossed the letter onto the table so I could see its heading.

Headings, plural, for the missive contained two separate letters folded together. The first was from Scotland Yard. The second was emblazoned with the words, D'Oyly Carte Opera.

I reared back, far more alarmed by the stationery than by the thought of climbing storm-tossed rigging in the company of cut-throats.

"Gilbert and Sullivan?" I exclaimed."Pirates as in Penzance? Light opera and heavy humour? No. Absolutely not. Whatever Inspector Lestrade has in mind, I refuse."

"One gathers," Holmes reflected, reaching for another slice of toast, "that the title originally did hold a double entendre, Gilbert's dig at the habit of American companies to flout the niceties of British copyright law."

He was not about to divert me by historical tidbits or an insult against my American heritage: This was one threat against which my homeland would have to mount its own defence.

"You've dragged your sleeve in the butter." I got to my feet, picking up my half-emptied plate to underscore my refusal.

"It would not be a singing part," he said.

I walked out of the room.

He raised his voice. "I would do it myself, but I need to be here for Mycroft, to help him tidy up after the Goodman case."

Answer gave I none.

"It shouldn't take you more than two weeks, three at the most. You'd probably find the solution before arriving in Lisbon."

"Why-" I cut the question short; it did not matter in the least why the D'Oyly Carte company wished me to go to Lisbon. I poked my head back into the room. "Holmes: no. I have an entire academic year to catch up on. I have no interest whatsoever in the entertainment of hoipolloi. The entire thing sounds like a headache. I am not going to Lisbon, or even London. I'm not going anywhere. No."

Pirate king: I don't think much of our profession, but, contrasted with respectability, it is comparatively honest.

My steamer lurched into Lisbon on a horrible sleet-blown November morning. 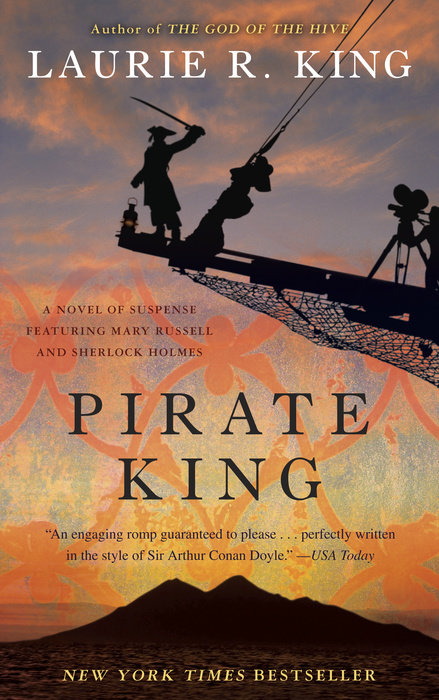