For fans of Jacqueline Winspear, Laurie R. King, and Anne Perry, Mr. Churchill’s Secretary captures the drama of an era of unprecedented challenge—and the greatness that rose to meet it.

London, 1940. Winston Churchill has just been sworn in, war rages across the Channel, and the threat of a Blitz looms larger by the day. But none of this deters Maggie Hope. She graduated at the top of her college class and possesses all the skills of the finest minds in British intelligence, but her gender qualifies her only to be the newest typist at No. 10 Downing Street. Her indefatigable spirit and remarkable gifts for codebreaking, though, rival those of even the highest men in government, and Maggie finds that working for the prime minister affords her a level of clearance she could never have imagined—and opportunities she will not let pass. In troubled, deadly times, with air-raid sirens sending multitudes underground, access to the War Rooms also exposes Maggie to the machinations of a menacing faction determined to do whatever it takes to change the course of history.

Ensnared in a web of spies, murder, and intrigue, Maggie must work quickly to balance her duty to King and Country with her chances for survival. And when she unravels a mystery that points toward her own family’s hidden secrets, she’ll discover that her quick wits are all that stand between an assassin’s murderous plan and Churchill himself.

In this daring debut, Susan Elia MacNeal blends meticulous research on the era, psychological insight into Winston Churchill, and the creation of a riveting main character, Maggie Hope, into a spectacularly crafted novel.

An excerpt from Mr. Churchill's Secretary

“I WOULD SAY to the House, as I’ve said to those who have joined this Government, I have nothing to offer but blood, toil, tears and sweat. We have before us an ordeal of the most grievous kind. We have before us many, many long months of struggle and suffering,” intoned Winston Leonard Spencer Churchill to the House of Commons and the British nation in his first speech as the new Prime Minister.

There must have been complete silence in the House, although there was a burst of static over the airwaves as Maggie leaned forward to listen to the BBC on the wireless. She and Paige sat at the kitchen table and clasped hands, listening to the address. Charlotte, better known as Chuck, entered the kitchen quietly and leaned against the door frame.

“Chuck nodded her acknowledgment of both girls. Together they all listened to the speech’s conclusion in tense silence.

“But I take up my task with buoyancy and hope. I feel sure that our cause will not be suffered to fail among men. At this time I feel entitled to claim the aid of all, and I say, ‘Come then, let us go forward together with our united strength.’ ”

The three girls were perfectly still and silent for a moment, as the words’ gravity washed over them.

“Well, at least it’s the truth,” Maggie said, pushing back a stray lock of red hair. “He didn’t try to pretend everything’s all right and fob us off with easy comfort and lies.”

“I just don’t know,” Chuck said to both girls as a tinny version of “God Save the King” played, and she walked over to click off the wireless.

Chuck gave a snort. “Oh, right. And then they’ll stop? You really believe that?”

“This is a different kind of war,” Maggie said. “A people’s war. It’s not just soldiers on the front line, it’s civilians. We are the new front line.” As she said the words, her chest constricted a bit. It was true. England might still be in the “Bore War,” where nothing dangerous was really happening, but things were about to change. Nazis had invaded most of Europe and were undoubtedly moving toward England. Would troops try to invade by sea or parachute down from the sky? Either way, the scenario was grim.

“Yeah,” said Chuck. “We’re as likely to be bombed here in our own home as the soldiers over in France.”

“Chuck frowned and pulled her bottle-green cardigan sweater around her, rather like a general settling his uniform before going once more unto the breach. “Tea,” she stated in her deep, booming voice, deliberately changing the subject. “We all need tea. There’ll be no blood, toil, tears, or sweat until I have some goddamned tea.”

That was Chuck, practical and pragmatic. More handsome than beautiful, with rich chestnut-brown hair, strong features, and thick black eyelashes, Chuck McCaffrey had worked for U.S. Ambassador Joseph Kennedy, along with Paige Kelly, before the war had started.

Maggie Hope had come to London for another reason altogether—to sell her late grandmother’s great leaking, creaking pile of a Victorian house. But when Britain declared war, and Joseph Kennedy began being quoted in the papers spouting pro-Nazi sentiments, both Paige and Chuck both quit their jobs with the Ambassador—and lost their Embassy housing. Maggie, admiring their resolve, invited them to move in, and they gratefully acquiesced.

“Paige and Maggie had met years before either had come to London, at Wellesley College, an all-women’s school in Massachusetts. Paige was a rich debutante from Virginia with perfect waves of glistening golden hair and a heart-shaped face, and Maggie a red-haired and pale faculty brat far more interested in fractions than fashions, but they’d become fast friends nonetheless. Finding each other in London had been pure serendipity; becoming housemates made a pleasure of a financial necessity. The flatmates’ rent, along with Maggie’s work privately tutoring students in math, allowed her to stay in London.

Chuck made her way toward the copper kettle on the stove but stopped short at the state of the sink, piled high with dirty dishes. “Jesus H. Christ!”

Maggie shrugged. “The twins.” The twins in question were Annabelle and Clarabelle Wiggett, two pixielike young blondes who also lived in the house, known as much for their thick Norwich accents and incessant giggling as for the catastrophic messes they left. Chuck referred to them, not necessarily unkindly, as “the Ding-belles,” “the Dumb-belles,” and “the Hell’s Belles.”

Chuck made a low growl in her throat. “Off with their heads,” she muttered, rolling up her sleeves and taking up a dishrag.

The telephone rang, and Paige jumped to get it. “Hello?” she cooed, as if expecting to hear from one of her numerous boyfriends. Then, “Oh, yes, David—she’s here.” David was David Greene, one of Maggie’s good friends, who worked as a private secretary to Winston Churchill.

Maggie took the heavy black Bakelite receiver and sat down at the kitchen table, running her fingers over the nicks and scars in the wood. “It’s just that the girl’s gone missing,” David said, his voice solemn. “Actually, it’s a bit more serious than that. But the thing is, we need a replacement. Yesterday.”

“Wasn’t she murdered a few days ago?”

Maggie asked. “Mugged for a few pounds? I saw something in The Times about it. And in Pimlico, too—”

Paige and Chuck both turned, listening.

“Look, it’s a terrible situation, Magster, but there’s still a war on and work to be done. Now more than ever. We need to fill the position.”

“Paige and I have already decided—we’re going to be drivers. The call of the open road and all.”

“Maggie, my dear, I know you can take dictation and type well. And that’s what’s needed right now. And please, let me emphasize the right now bit.”

Maggie leaned back in the chair. She could see where this was going. “Well, then, why don’t you do it?”

“I’m already a private secretary, research and that sort of thing. Besides, I don’t, well—”

“Maggie raised an eyebrow. “You mean you don’t…type?”

Maggie was silent. Dishes done, Chuck had turned back to her tea, the mug dwarfed by her large, capable hands. Paige busied herself with the newspaper.

“Merciful Zeus, woman!” David exclaimed over the crackling line. “It’s a chance to work on the front lines. You’d be doing something important. Making a difference.”

The knowledge that he was right stung. She could make a difference. But not in the way she wanted, with her mathematic capabilities. As a typist.

“Working for Mr. Churchill would be one of the hardest and most challenging jobs you can do. And vital as well. But it’s up to you, of course. I can’t say it’s going to be anything but difficult. But if you’re interested, I can make it happen. We’ve already started the paperwork, proving you’re a British citizen in good standing—despite your dreadful accent.”

“Maggie smiled in spite of herself; David loved to mock her American accent. “Would there be any chance of my being involved with the research and writing end of things? After all, with my degree, I could be of more help, especially with things like queue theory, allocating resources, information theory, code and cipher breaking—”

He sighed. “I’m sorry, Maggie, but they’re only hiring men for those jobs. I understand your frustration….” Maggie had already tried for a private secretary job, a position traditionally held by young Oxbridge men from upper-class families. Despite being more than qualified, she’d been turned down.

“No, David. You don’t.” It wasn’t his fault, but still, the truth hurt. She could type and file, while young men her age, like David, could do more—research, reports, writing. It just wasn’t fair, and the knowledge made her want to throw and break things. Immature, she knew, but honest. “I’d rather drive or work in a factory, making tanks.”

“Look, you of all people should know why.” David, after all, wouldn’t be there, either, if they knew everything about him. “You don’t get to judge me.”

There was silence on the other end, and then the line crackled. In the kitchen, the girls looked at each other in shock. 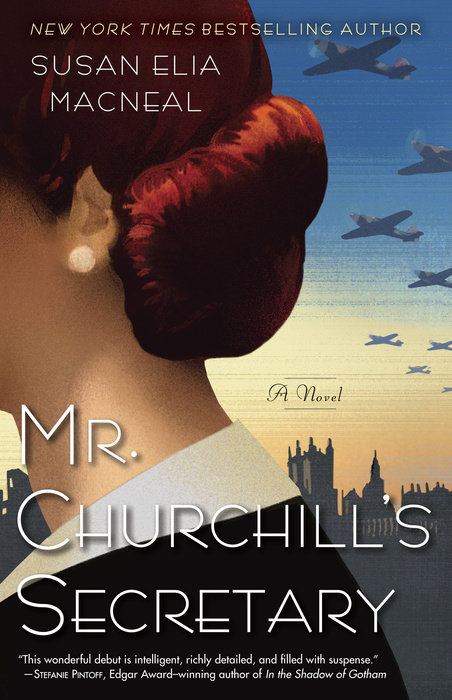