“A page-turning and often laugh-out-loud-funny caper through a mix of the modern and the mythic.”—Ari Marmell, author of The Warlord’s Legacy

Atticus O’Sullivan has had cause to mistrust witches in his storied past, but he’s willing to live and let live with the Sisters of the Three Auroras, a legendary local coven, even going so far as to sign a non-aggression treaty with them. But that treaty is tested immediately when a deadly new coven sweeps into town seeking to take over, along with some Bacchants from Las Vegas and a fallen angel who’s decided to snack on high school students like they were trail mix.

It’s more than Atticus can handle alone and he must enlist the trickster Coyote, the headhopping abilities of the witch Laksha Kulesekaran, and his neighbor’s illegal arsenal if he wants to keep the city safe from diabolical takeover. He must also exchange favors with his vampire attorney, Leif Helgarson, in a deal that might prove to be the worst of his long life—for Leif doesn’t want to be paid by the hour.

To defeat the mortal hexes of this new coven and keep his apprentice—and his city—safe, Atticus must think fast, make promises, keep his sword handy, and hope he’ll survive to fight another day.

An excerpt from Hexed

Turns out that when you kill a god, people want to talk to you. Paranormal insurance salesmen with special “godslayer” term life policies. Charlatans with “god-proof” armor and extraplanar safe houses for rent. But, most notably, other gods, who want to first congratulate you on your achievement, second warn you not to try such shenanigans on them, and finally suggest that you try to slay one of their rivals—purely as a shenanigan, of course.

Ever since word got around to the various pantheons that I had snuffed not one but two of the Tuatha Dé Danann—and sent the more powerful of the two to the Christian hell—I had been visited by various potentates, heralds, and ambassadors from most of the world’s belief systems. All of them wanted me to leave them alone but pick a fight with someone else, and if I successfully lanced the immortal boil that vexed them, I’d be rewarded beyond my wildest dreams, blah blah barf yak.

That reward business was a giant load of shite, as they’d say in the U.K. Brighid, Celtic goddess of poetry, fire, and the forge, had promised to reward me if I killed Aenghus Óg, but I hadn’t heard a word from her in the three weeks since Death carried him off to hell. I’d heard plenty from the rest of the world’s gods, but from my own? Nothing but the chirping of crickets.

The Japanese wanted me to mess with the Chinese, and vice versa. The old Russian gods wanted me to stick it to the Hungarians. The Greeks wanted me to knock off their Roman copycats in a bizarre manifestation of self-loathing and internecine jealousy. The weirdest by far were those Easter Island guys, who wanted me to mess around with some rotting totem poles in the Seattle area. But everyone—at least, it sure seemed like everyone—wanted me to slay Thor as soon as I had a free moment. The whole world was tired of his shenanigans, I guess.

Foremost among these was my own attorney, Leif Helgarson. He was an old Icelandic vampire who had presumably worshipped Thor at some point in ancient history, but he’d never told me why he now harbored such hatred for him. Leif did some legal work for me, sparred with me regularly to keep my sword arm sharp, and occasionally drank a goblet full of my blood by way of payment.

I found him waiting for me on my porch the night after Samhain. It was a cool evening in Tempe, and I was in a good mood after having much to give thanks for. While the American children had busied themselves the night before by trick-or-treating on Halloween, I had paid plenty of attention to the Morrigan and Brighid in my own private ceremonies, and I was thrilled to have an apprentice to teach and to share the night with. Granuaile had returned from North Carolina in time for Samhain, and though the two of us were not much of a Druid’s grove, it was still a better holy night than I had enjoyed in centuries. I was the only real Druid left, and the idea of starting a new grove after such a long time of going it alone had filled me with hope. So when Leif greeted me formally from my front porch as I came home from work, I was perhaps more exuberant in my response than I should have been.

“Leif, you spooky bastard, how the hell are ya?” I grinned widely as I braked my bike to a stop. He raised his eyebrows and peered at me down his long Nordic nose, and I realized that he was probably unused to such cavalier address.

“I am not a bastard,” he replied archly. “Spooky I will grant you. And while I am well”—a corner of his mouth quirked upward a fraction—“I confess not so jocund as yourself.”

“Jocund?” I raised my brows. Leif had asked me in the past to call him on behaviors that broadcast how much older he was than he looked.

Apparently he didn’t want to be corrected right then. He exhaled noisily to express his exasperation. I thought it amusing that he employed that, since he had no need to breathe. “Fine,” he said. “Not so jovial, then.”

“No one uses those words anymore, Leif, except for old farts like us.” I leaned my bike against the porch rails and mounted the three steps to take a seat next to him. “You really should spend some decent time learning how to blend in. Make it a project. Popular culture is mutating at a much faster rate these days. It’s not like the Middle Ages, when you had the Church and the aristocracy keeping everything nice and stagnant.”

“Very well, since you are the verbal acrobat who walks the tightrope of the zeitgeist, educate me. How should I have responded?”

“First, get rid of ‘well.’ Nobody uses that anymore either. Now they always say, ‘I’m good.’ ”

Leif frowned. “But that is grammatically improper.”

“These people don’t care about proper. You can tell them they’re trying to use an adjective as an adverb and they’ll just stare at you like you’re a toad.”

“Their educational system has suffered serious setbacks, I see.”

“Tell me about it. So what you should have said was, ‘I’m not stoked like you, Atticus, but I’m chill.’ ”

“It’s modern vernacular.” I shrugged. “Date yourself if you want, but if you keep using nineteenth-century diction, people will start to think you’re a spooky bastard.”

“They already think that.”

“You mean because you only come out at night and you suck their blood?” I said in a tiny, innocent voice.

“No, Leif.” I shook my head in all seriousness. “They don’t figure that out until much later, if they ever figure it out at all. These people think you’re spooky because of the way you talk and the way you behave. They can tell you don’t belong. Believe me, it’s not that you have skin like two-percent milk. Lots of people are scared of skin cancer out here in the Valley of the Sun. It’s once you start talking that people get creeped out. They know you’re old then.”

“And I’ve got at least a thousand years on you, or have you forgotten?”

He sighed, the weary ancient vampire who had no need for respiration. “No, I have not forgotten.”

“Fine. Don’t complain to me about being old. I hang out with these college kids and they have no clue that I’m not one of them. They think my money comes from an inheritance or a trust fund, and they want to have a drink with me.”

“I find the college children delightful. I would like to have a drink with them too.”

“No, Leif, you want to drink of them, and they can sense that subconsciously because you radiate this predatory aura.”

His affectation of a henpecked husband sloughed away and he looked at me sharply. “You told me they can’t sense my aura as you do.”

“No, they can’t consciously sense it. But they pick up on your otherness, mostly because you don’t respond like you should or act like a man of your cosmetic age.”

“Ehh,” I appraised him, looking for wrinkles. “You look like you’re in your late thirties.”

“I look that old? I was turned in my late twenties.”

“Times were tougher back then.” I shrugged again.

“I suppose. I have come to talk to you about those times, if you are free for the span of an hour or so.”

“Right,” I replied, rolling my eyes. “Just let me go get my hourglass and my freakin’ smoking jacket. Listen to yourself, Leif! Do you want to blend in or not? The span of an hour? Who says shit like that anymore?”

“What’s wrong with that?”

“No one is so formal! You could just say ‘if you’re free’ and end it there, though it would have been better to say ‘if you ain’t doin’ nothing.’

“Gods Below, you compose your sentences in blank verse? No wonder you can’t carry on a half hour’s conversation with a sorority girl! They’re used to talking with frat boys, not Shakespearean scholars!”

It was my Irish wolfhound, Oberon, speaking directly to my mind through the connection we share. He was probably on the other side of the door, listening to us talk. I told Leif to hold on a second as I spoke with him.

You’re a good hound. Want to come hang out with us?

I have to warn you, it might be boring. He wants to talk about something for a while, and he’s looking particularly grim and Nordic. It might be epic.

Thanks, buddy. I promise we’ll go for a run when he leaves.

I opened the front door and Oberon came bounding out, oblivious to the fact that his wagging tail was delivering steady blows to Leif’s upper arm. 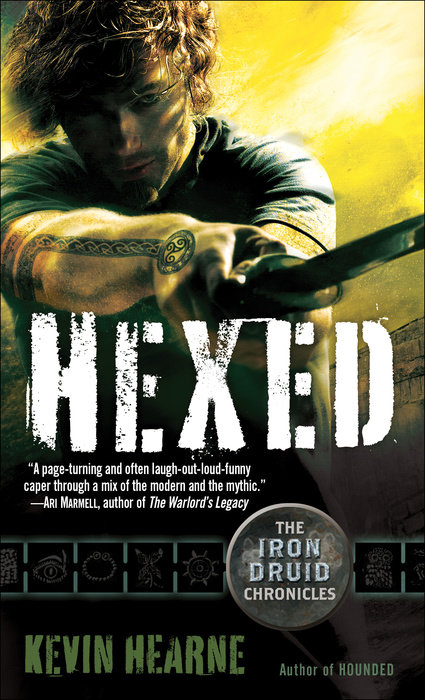