From the New York Times bestselling author of A Deadly Education comes the ninth and final volume of the Temeraire series, as the Napoleonic Wars draw to a close and the final battles play out.

The deadly campaign in Russia has cost both Napoleon and those allied against him. Napoleon has been denied his victory . . . but at a terrible price. Laurence and the dragon Temeraire pursue the fleeing French army west but are demoralized when Napoleon makes it back to Paris unscathed. Worse, they soon learn that the French have stolen Temeraire and Iskierka’s egg. Now it is do or die, as our heroes need not only to save Temeraire’s offspring but also to stop Napoleon for good.

An excerpt from League of Dragons

The Chevalier was not dead when they found her, but the scavengers had already begun to pick at her body. A cloud of raucous crows lifted when Temeraire’s shadow fell over the clearing, and a stoat slunk away into the underbrush, coat white, muzzle red. As he dismounted, Laurence saw its small hard shining eyes peering patiently out from beneath the bramble. The French dragon’s immense sides were sunken in between her ribs so deeply that each hollow looked like the span of a rope bridge. They swelled out and in with every shallow breath, the movement of her lungs made visible. She did not move her head, but her eye opened a very little. It rolled to look on them, and closed again without any sign of comprehension.

A dead man sat in the snow beside her, leaning against her chest and staring blindly forward, in the ragged remnants of what had once been the proud red uniform of the Old Guard. He wore epaulets and the front of his coat was pockmarked with many punctures where medals had once hung, likely sold to whichever Russian peasants would sell him a pig or a chicken for gold and silver. Flotsam from Napoleon’s disintegrating Grande Armée: the dragon had most likely been driven by hunger to go too far afield, searching for food, and having spent her final strength could not then catch up the remaining body of her corps. She had come down a day ago: the churned ground beneath her was frozen into solid peaks, and her captain’s boots were drifted over with the snow which had fallen yesterday morning.

Laurence looked for the sun, descending and only barely shy of the horizon. Every scant hour of daylight now was precious, even every minute. The last corps of Napoleon’s army were racing west, trying to escape, and Napoleon himself with them. If they did not catch him before the Berezina River, they would not catch him; he had reinforcements and supply on the other side—dragon reinforcements, who would spirit him and his troops safely away. And all this devouring war would have no conclusion, no end. Napoleon would return only a little chastened to the welcoming cradle of France and raise up another army, and in two years there would be another campaign—another slaughter.

Another laboring breath pushed out the Chevalier’s sides; breath steamed out of her nostrils, billowing like cannon-smoke in the frigid air. Temeraire said, “Can we do nothing for her?”

“Let us lay a small fire, Mr. Forthing, if you please,” Laurence said.

But the Chevalier would not take even water, when they melted some snow for her to drink. She was too far gone; if indeed she wished any relief with her captain gone and a living death already upon her.

There was only one kindness left to provide. They could not spare powder, but they still had a few iron tent-poles with sharpened ends. Laurence rested one against the base of the dragon’s skull, and Temeraire set his massive claw upon it and thrust it through with a single stroke. The Chevalier died without a sound. Her sides rose and fell twice more while the final stillness crept slowly along her enormous body, spasms of muscle and sinew visible beneath the skin. A few of the ground crew stamped their boots and blew on their hands. The snow heavy upon the pine-trees standing around them made a muffled silence.

“We had better get along,” Grig said, before the final shudders had left the Chevalier’s tail; a faint note of reproach in his high sparrow-voice. “It is another five miles to the meeting-place for to-night.”

He alone of their company was little affected by the scene, but then the Russian dragons had cause enough to be inured to cruelty and hunger, having lived with both all their days. And there was no real justification for ignoring him; they had done what little good there was to be done. “See the men back aboard, Mr. Forthing,” Laurence said, and walked to Temeraire’s lowered head. The breath had frozen in a rim around Temeraire’s nostrils while they flew. Laurence warmed the ice crust with his hands and broke it carefully away from the scales. He asked, “Are you ready to continue onwards?”

Temeraire did not immediately answer. He had lost more flesh than Laurence liked these last two weeks, from bitter cold, hard flying, and too little food. Together these could waste the frame of a heavy-weight dragon with terrifying speed, and the Chevalier made a grim object lesson to that end. Laurence could not but take it to heart.

He once more bitterly regretted Shen Shi, and the rest of their supply-train. Laurence had already known to value the Chinese legions highly, but never so much as when they were gone, and all the concerns of ensuring their supply had fallen into his own hands. The Russian aviators had only the most outdated notions of supply for their beasts, and Temeraire, with all the will in the world, had too much spirit to believe that he could not fly around the world on three chickens and a sack of groats if doing so would put him in striking distance of Napoleon again.

“I am so very sorry Shen Shi and the others had to go back to China,” Temeraire said finally, in an echo of Laurence’s thoughts. “If we were only traveling in company, perhaps . . .”

He trailed off. Even the most relentless optimism could not have imagined a rescue for the poor Chevalier: three heavy-weights together would have had difficulty in carrying her. “At least we might have given her some hot porridge,” Temeraire said.

“If it is any consolation to you,” Laurence said, “remember she came into this country as a conqueror, and willingly.”

“Oh! What would the dragons of France not do for Napoleon?” Temeraire said. “When you know how much he has given them, and how he has changed their lot: built them pavilions and roads through all Europe, and given them their rights? You cannot blame her, Laurence; you cannot blame any of them.”

“Then at least you may blame him,” Laurence said, “for trading so far on that loyalty to bring her and her fellows into this country in a vain and unjustified attempt at conquest. It was never in your power to prevent her coming, or to rescue her. Only her master might have done so.”

“I do,” Temeraire said. “I do blame him, and Laurence, it would be beyond everything, if he should escape us now.” He heaved a deep breath, and raised his head again. “I am ready to go.”

The men were already aboard; Temeraire lifted Laurence to his place at the base of his neck, and with a spring not as energetic as Laurence would have liked, they were aloft again. Beneath them, the stoat crept out of its hiding-place and went back to its feasting.

The ferocious wind managed to come as a surprise again, even after so short a break in their flying. The last warmth of autumn had lingered late into November, but the Russian winter had come with a true vengeance now, more than justifying all the dire warnings which Laurence had heard before its advent, and to-day the temperature had fallen further still. He was used to biting cold upon the deck of a racing frigate or aloft upon a dragon’s back in winter, but no experience had prepared him to endure this chill. Leather and wool and fur could not keep it out. Frost gathered thickly on his eyelashes and brows before he could even put his flying-goggles back on; when at last he secured them, the ice melted and ran down the insides of the green glass, leaving trails across his sight like rain.

The ground crew traveling in the belly-netting, shielded better from the wind, might huddle together and make a shared warmth; he had given his scant handful of officers permission to sit together in twos and threes. He could permit himself no such comfort. Tharkay had left them two weeks before, on his way to answer an urgent call to Istanbul; there was no-one else whom Laurence might sit with, without awkwardness—Ferris could not be asked without reflection on Forthing, and equally the reverse; and he could not ask them both, when they might at any moment be attacked. They had to be spread wider than that across Temeraire’s back.

He endured the cold as best he could beneath wrappings of oilcloth and a patchwork fur made of rabbit- and weasel-skins, keeping his fingers tucked beneath his arm-pits and his legs folded. Still the chill crept inexorably throughout his limbs, and when his fingers reached a dangerous numbness and ceased to give him pain, he forced himself to stand up in his straps. He carefully unlatched one carabiner, working slowly with thick gloves and numbed hands, and hooked it to a further ring; he then undid the second, and made his way along the harness hand-over-hand to the limits of the first strap before latching back on. 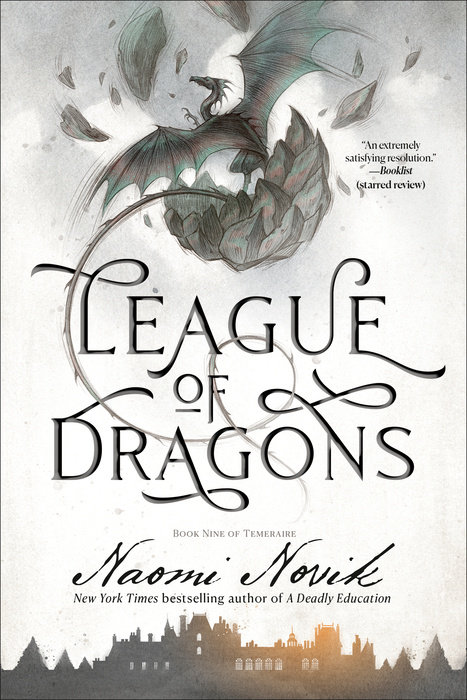