Discover the book that puts a face on happiness

In 2009, photographer Joseph Peter traveled through fifty African nations in seventy-five days and shot 150,000 images—mostly portraits of joyous, proud, glorious faces. He photographed presidents and heads of state, soldiers and workers, and children of all ages. He captured their smiles, their laughter, their humanity.

He captured their happiness.

First collected in a special handmade leather-bound edition, Joseph Peter’s “book of happiness” was originally presented to Nelson Mandela as a heartfelt personal gift. Now you can experience for yourself the joyful spirit of a place and its people—a dazzling and optimistic vision of Africa that is as simple, beautiful, and universal as a child’s smile.

An excerpt from The Book of Happiness: Africa

When I was thirteen, my father took me to see the FIFA World Cup Trophy in Boston during its tour around the United States for the 1994 FIFA World Cup USA. As an aspiring soccer player, I found it a moment of pure inspiration. It was also the beginning of an adventure that would take me around the world, playing professional soccer and immersing myself in different languages and cultures. Since that day I have always thought of the World Cup Trophy as more than a sporting icon. It is a symbol of unity and hope, and a common source of happiness that has brought billions of people together.

Nineteen years later, it was no longer my feet that were taking the shots, but my fingers. The passion and energy I had put into sport found a new focus in photography. I had left soccer behind (or so I thought), though my love of travel remained constant. In July 2009 I found myself in Istanbul, taking photographs in the lively Fener district. I had just taken a photograph of a young girl smiling in a crowded marketplace. Looking down at the camera screen, I suddenly felt a radiance emanating from the image that changed everything I was feeling at that moment. The happiness on the face of this child was infectious. I kept returning to that image as the day progressed, and it stirred a curiosity in me about the effect the smile of an unknown face can have on you.

Later that night, over a drink with a friend, the conversation turned to the upcoming World Cup, which was being held in South Africa. I was reminded of the joy the trophy had inspired in me all those years ago and the joy it would bring to the hundreds of millions of soccer fans across the African continent. Nelson Mandela had traveled to FIFA headquarters in Zürich to win the World Cup bid. I was seized with the desire to capture this historic tidal wave of joy. The purpose of this mission became clear to me in an instant, and it would be guided by my two loves: soccer and photography. The vision of happiness I had seen on the face of that little girl in the Turkish market not only inspired the journey, but also has given direction to my work and my life ever since.

By an extraordinary stroke of luck and some quick maneuvering, within three weeks’ time I’d joined the FIFA World Cup Trophy Tour by Coca-Cola as it made its way across the continent. The tour covered fifty countries in seventy-five days. Every day I lost more legroom in our small plane to the bulky equipment needed to store the images on my camera. By the end of the trip I had taken about 150,000 photos. Every time we touched down in a hosting country, people flocked to see the trophy. Hosting the World Cup tournament was an immense honor for South Africa and a source of great pride for all Africans. As I followed the trophy I saw that Africa had the perfect terrain for soccer fields, great athletes for players, and the most spirited supporters for fans. I captured the faces of presidents, heads of state, soldiers, workers, and children. The Book of Happiness: Africa named itself, because this emotion was what I saw hundreds of times a day through my camera lens.

I am not the first photographer to have a love affair with this continent. Its colors, diverse landscape, fierce beauty, and wildlife are well recorded in the pages of newspapers and books. But what I saw during the World Cup tour was unique to my eyes: a glorious vision of relentlessly positive images of the people of Africa. Without a doubt, many, many places on the continent are plagued by the tremendous challenges of staggering poverty, violent conflict, and all sorts of hardship. But I was fortunate enough to witness the generous, loving spirit of the people and an inherent wellspring of hope. When K’naan took the stage in Uganda to perform “Wavin’ Flag,” it started to rain heavily. Not one person left the stadium. This is the African spirit. My heart remains forever open and grateful for these memories.

The day after the World Cup final, one year to the day after I took the photo of the girl in the Turkish market, I had the privilege of presenting the first copy of The Book of Happiness: Africa to Nelson Mandela at his home in Johannesburg. It was one of the most humbling experiences of my life. The original copies of the book were handmade. I used materials collected during the tour—fabrics, old papers, inks, paints, and leathers—to accent the images. A special edition was auctioned in South Africa at the Mandela Foundation gala, raising $15,000. Various heads of state, United Nations officials, FIFA officials, CEOs, and celebrities have since been given copies of the book, with the intention of sharing these too-seldom-seen positive images of Africa.

The book you hold in your hands is the first edition for the general public. A portion of the proceeds of each sale will go back to the continent, via a partnership with the Coca-Cola Africa Foundation, to benefit the people that the beautiful faces in these portraits represent.

Nelson Mandela once said that people need inspiration to change. It is my wish that every smile in The Book of Happiness: Africa inspires people like us to make change.

To the African people, you have my unending gratitude. My soul is forever changed. 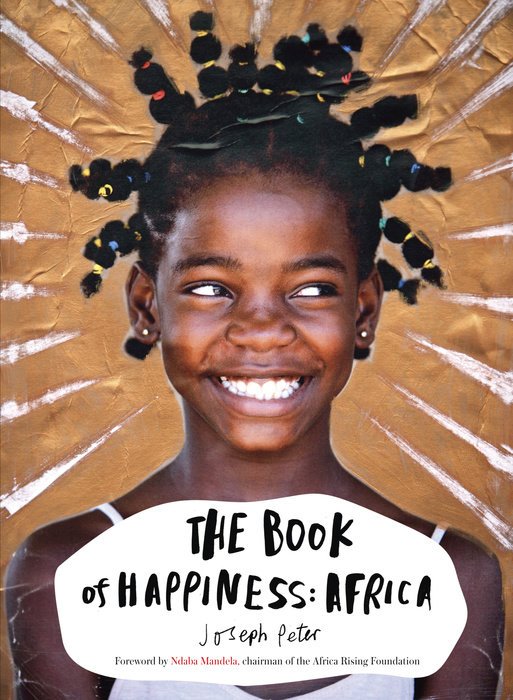