CAN SECRETS AND SECOND CHOICES EVER LEAD TO LOVE?

After three months in a mail-order marriage, Hannah Wentworth McMurtry is a widow—pregnant, alone, and near death in the Wyoming wilderness. Though she is saved by a man with a face cut from stone, she still grieves the husband who died on their journey west. Hannah needs a husband, but does she dare marry another stranger?

Flint Creed has also lost someone he loved—when the woman he hoped to marry chose his younger brother instead. Now he must find a ranch wife of his own. But every female in the remote Wyoming Territory is too old, too young, or already married . . . until he discovers Hannah on the prairie. Flint doesn’t pretend to love her, but he doesn’t tell her he loves another woman, either. Hannah doesn’t pretend to love him, but she doesn’t tell him about the child she carries. Though danger surrounds them on the Wyoming frontier, the greatest threats of all are the secrets within—revelations that could destroy the new life Hannah and Flint have begun to cherish.

An excerpt from Wyoming Bride

Hannah had never been so scared in her life, but running wasn’t an option. If she didn’t go through with her part of the marriage bargain, Mr. McMurtry might not go through with his. Her husband had left her alone in their room at the Palmer House Hotel to ready herself for bed. It had taken less than no time to strip out of her gray wool dress and put on the white flannel nightgown that was all she’d brought with her. She paced the outlines of the elegant canopied bed without ever going near it.

The room was luxurious enough to remind Hannah of the life she and her sisters and brothers had lost three years ago, when their parents were killed in the Great Chicago Fire. The six Wentworth children had ended up in the Chicago Institute for Orphaned Children, at the mercy of the cruel headmistress, Miss Iris Birch.

Hannah caught herself staring longingly at the fire escape through the fourth-floor window. The view blurred as tears of anger—terrible anger—and regret—enormous regret—filled her eyes.

Hannah felt trapped. Trapped by a moment of generosity she rued with her entire being. Why, oh why, had she listened to her tormented sister Josie’s plea?

Two months ago, their eldest sister Miranda had left the orphanage in the middle of the night with ten-year-old Nick and four-year-old Harry to become a mail-order bride in faraway Texas. Hannah, her twin sister Hetty, and Josie had been left behind to await news of whether Miranda’s new husband might have room for all of them.

Hannah and Hetty had been prepared to wait until they turned eighteen in December and were forced to leave the orphanage, if it took that long, for Miranda to send word to come. Josie had not.

Hannah tried to remember exactly what tactic her youngest sister had employed to convince her to answer that advertisement in the Chicago Daily Herald seeking a bride willing to travel west to the Wyoming Territory.

“We should wait for Miranda to contact us,” Hannah remembered arguing.

Hannah had taken one look at the desperation in Josie’s blue eyes, owlish behind wire-rimmed spectacles, and agreed to marry a man sight unseen.

At least she’d had the foresight to get a commitment from Mr. McMurtry that he would bring her two sisters along on the journey, which entailed three arduous months traveling by Conestoga wagon along the Oregon Trail. The trip could have been made in sixteen hours by rail, but as a child in Ireland, Mr. McMurtry had been on a train that derailed, killing the rest of his family. He refused to travel on another train.

They would all probably die of cholera or drown crossing a river or be scalped by Indians or trampled by a herd of buffalo long before they got to Cheyenne, where Mr. McMurtry planned to open a dry goods store.

Even if they made it all the way to Wyoming, she and Hetty and Josie were headed away from Miranda and Nick and Harry, with little chance of ever seeing them again. Agreeing to marry a total stranger headed into the wilderness was seeming more harebrained by the moment.

What on earth had possessed her to do something so very . . . unselfish?

Hannah was used to thinking of herself first. That had never been a problem when she was the spoiled and pampered daughter of wealthy parents. It had even served her well at the orphanage, where food and blankets were scarce. Before Miranda had left to become a mail-order bride, Hannah had been perfectly willing to let her eldest sister consider the needs of everyone else before her own.

Now Hannah was the eldest, at least, of the three who’d been left behind. Now it was her turn to sacrifice. Although marrying a perfect stranger seemed a pretty big leap from giving up food or blankets.

She was lucky the groom hadn’t turned out to be seventy-two and bald. In fact, he was only middle-aged. Was thirty-six middle-aged? To a girl of seventeen, it seemed ancient.

Her brand-new husband had a thick Irish brogue and an entire head of the curliest red hair she’d ever see on man or woman. His nose was a once-broken beak, but it gave character to an otherwise plain face. His eyes twinkled, like two dark blue stars caught in a spiderweb of wrinkles caused by years of smiling broadly—or too many hours spent working in the sun. Oh, yes, she felt very lucky.

Her tall, rail-thin groom was not the man of her dreams. He wasn’t even close.

Hannah was trying to decide how difficult it would be to open the window and retreat down the fire escape when she heard a firm—but quiet—knock at the door.

She scurried away from the window as though her presence there might reveal her desperate hope of avoiding the wedding night before her. There was no escape. She was DOOMED. She’d been well and truly caught in the trap Josie’s agonized eyes had set for her.

Her husband had arrived to make her his wife.

Hannah’s heart was jumping like a speckle-legged frog in a dry lake. Even knowing who must be at the door, she called out, “Who is it?” Her voice was hoarse and breathy. Fear had constricted her throat. She cleared it and said, “Who’s there?”

“It’s Mr. McMurtry,” a quiet—but firm—Irish voice replied. “May I come in?”

Hannah realized her husband expected to find her in bed. She stared at the gold brocade spread that still covered the sheets. She needed to pull it back and get into bed. But she couldn’t do it. She couldn’t!

To hell with being unselfish. She hated what she was being forced to do. She should have let Hetty do it. After all, Hetty was only two minutes younger! Hannah should have insisted they wait until Miranda contacted them. She should have told Josie No! in no uncertain terms. She should have run when she had the chance.

But she was married now, like it or not. And her husband was at the door.

Hannah curled her hands into angry fists and fought the tears that blurred her eyes and burned her nose. She hoped the coming journey was as dangerous as it was touted to be. Maybe her husband would die and leave her a widow and—

She brought herself up short and looked guiltily toward the door, behind which stood the man she was wishing dead. Wishing for freedom was one thing. Wishing another person dead to earn that freedom was something else entirely. That wasn’t how she’d been raised by her parents. Hannah was ashamed of having harbored such an unworthy thought.

No one had forced her to marry Mr. McMurtry. She’d volunteered to do it. She had to GROW UP. She had to put away childish hopes and dreams. This was her life, like it or not.

“Are you all right in there?”

Once again, Josie’s agonized gaze appeared in her mind’s eye. Hannah choked back a sob of resignation, then yanked down the covers and scrambled into bed, bracing her back against the headboard before pulling the covers up to her chin.

“Mrs. McMurtry? Are you there?”

Hannah cleared her throat and said, “You can come in, Mr. McMurtry.”

The door slowly opened. Mr. McMurtry stepped inside and closed the door behind him, but he didn’t move farther into the room.

Too late, Hannah realized she’d left the lamp lit, and that Mr. McMurtry would have to remove his wide-brimmed hat, string tie, chambray shirt, jeans, belt, socks, and hobnail boots—and perhaps even his unmentionables—with her watching. Unless she took the coward’s way out and ducked her head beneath the covers . . . or he had the foresight to put out the lamp.

Her new husband swallowed so hard his Adam’s apple bobbed, and said, “I had a cup of coffee downstairs.”

“Coffee will keep you awake.” Again, too late, Hannah realized there was a good reason why Mr. McMurtry might not want to go right to sleep.

Neither of them said anything for an awkward moment.

Hannah watched as Mr. McMurtry blushed. His throat turned rosy, and then the blood filled his face, turning a hundred freckles into red blots on his cheeks.

Hannah found herself staring back into her husband’s very blue eyes with astonishment. She’d known she was pretty, but this was the first time a grown man had remarked on the beauty of her blond curls and wide-spaced, sky-blue eyes, her full lips and peaches-and-cream complexion. It was surprisingly gratifying to hear such words from her husband.

Despite Mr. McMurtry’s speech, he remained backed up to the door.

Why, he’s scared, too! Hannah realized.

Her fear returned and multiplied. The situation was already mortifying in the extreme, but if he was inexperienced, who was going to tell her what to do?

“I’m really tired,” she blurted. Hannah dropped the sheet and put her hands to her cheeks as they flamed with embarrassment. “I don’t believe I said that.”

She glanced sharply in his direction. “Are you laughing at me?”

She narrowed her eyes suspiciously.

He continued, “I’ve just married the most beautiful woman I’ve ever seen, and I’m standing rooted to the floor a half a room away from her.” His smile turned lopsided as he admitted, “You see, I’ve never undressed a woman before . . . or undressed before a woman.”

Hannah swallowed hard and whispered, “Never? Not even a . . .” She couldn’t say the word prostitute or soiled dove or even lady of the night. Ladies did not speak of such things.

He shook his head. “I’m Catholic. Fornication is a sin.”

“Oh.” Hannah couldn’t breathe. It felt like all the air had been sucked from the room. He was thirty-six, and he’d never been with a woman? This was going to be a disaster. 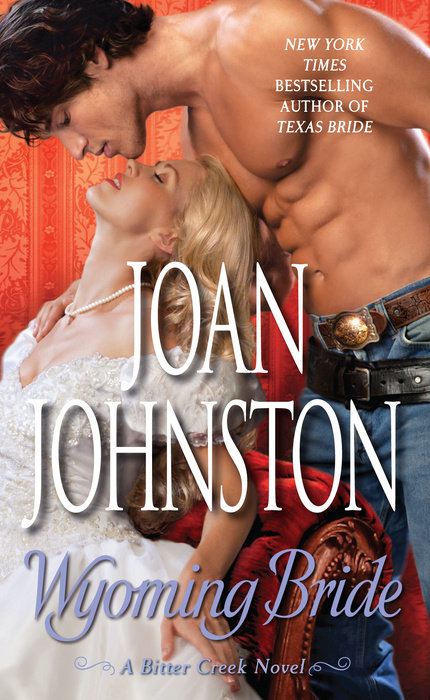