Inside the Hidden World of the Tour de France

“The holy grail for disillusioned cycling fans . . . The book’s power is in the collective details, all strung together in a story that is told with such clear-eyed conviction that you never doubt its veracity. . . . The Secret Race isn’t just a game changer for the Lance Armstrong myth. It’s the game ender.”—Outside

The Secret Race is the book that rocked the world of professional cycling—and exposed, at long last, the doping culture surrounding the sport and its most iconic rider, Lance Armstrong. Former Olympic gold medalist Tyler Hamilton was once one of the world’s top-ranked cyclists—and a member of Lance Armstrong’s inner circle. Over the course of two years, New York Times bestselling author Daniel Coyle conducted more than two hundred hours of interviews with Hamilton and spoke with numerous teammates, rivals, and friends. The result is an explosive page-turner of a book that takes us deep inside a shadowy, fascinating, and surreal world of unscrupulous doctors, anything-goes team directors, and athletes so relentlessly driven to win that they would do almost anything to gain an edge. For the first time, Hamilton recounts his own battle with depression and tells the story of his complicated relationship with Lance Armstrong. This edition features a new Afterword, in which the authors reflect on the developments within the sport, and involving Armstrong, over the past year. The Secret Race is a courageous, groundbreaking act of witness from a man who is as determined to reveal the hard truth about his sport as he once was to win the Tour de France.

With a new Afterword by the authors

“Loaded with bombshells and revelations.”—VeloNews

“ ‘If I cheated, how did I get away with it?’ That question, posed to SI by Lance Armstrong five years ago, has never been answered more definitively than it is in Tyler Hamilton’s new book.”—Sports Illustrated

An excerpt from The Secret Race

As a bike racer, over time you develop the skill of keeping a poker face. No matter how extreme a sensation you feel—no matter how close you are to cracking—you do everything in your power to mask it. This matters in racing, when hiding your true condition from your opponents is a key to success, since it discourages them from attacking. Feel paralyzing pain? Look relaxed, even bored. Can’t breathe? Close your mouth. About to die? Smile.

I’ve got a pretty good poker face; Lance has a great one. But there’s one guy who’s better than either of us: Johan Bruyneel. And it was never so well used as that night at the end of the 2000 Dauphiné, when he told me about the plans for the blood transfusion. I’d heard about transfusions before, but it was always theoretical and distant—as in, can you believe that some guys actually bank their blood, then put it back in before a race? It seemed weird, Frankenstein- ish, something for Iron Curtain Olympic androids in the eighties. But Johan, when he explained the plan during the Dauphiné, made it sound normal, even boring. He’s good at making the outrageous sound normal—it might be his greatest skill. It’s something in his expression, in the certainty of his big Belgian voice, in the supremely casual way he shrugs while laying out the details of the plan. Whenever I watch the likable gangsters on The Sopranos, I think of Johan.

As Johan explained it, Lance, Kevin, and I would fly to Valencia. We would donate a bag of blood, which would be stored, and we’d fl y home the next day. Then, at a key point during the Tour, we’d put the bag back in, and we’d get a boost. It would be like taking EPO, except better: there were rumors of an EPO test being developed for the 2000 Olympics, and word was, they might be using the test during the Tour. I listened to Johan, nodded, gave him my poker face. When I told Haven about it, she gave me the poker face right back (wives get good at it, too). But part of me was thinking, What the hell?

Maybe that’s why I was late the Tuesday morning we left for Valencia. There was no reason to be late—everybody knew Lance despised lateness above all things—but on that crucial morning we were running late by a full ten minutes. I raced our little Fiat through the narrow streets of Villefranche; Haven was hanging on to the oh-shit bars, asking me to slow down. I kept speeding up. It was eight miles to the airport in Nice. During the trip, my cell phone rang three times. Lance.

Dude, where are you?
What’s going on? We’re about to take off.
How fast can that fucking car of yours go? Come on!

We screeched into the airport parking lot; I walked through the security area and onto the runway. I’d never been on a private jet before, so I took in the scene: the leather seats, the television, the little fridge, the steward asking me if I would like anything to drink.

Lance acted casual, as if private jets were routine—which for him, they were. He’d been riding them fairly constantly since the previous July, courtesy of Nike, Oakley, Bristol-Myers Squibb, and the other corporations who were competing for the privilege of ferrying him around. The numbers were unbelievable. USA Today estimated Lance’s income at $7.5 million, he was getting paid $100,000 per speech, and his new memoir, It’s Not About the Bike, was an instant best seller. You could feel the flow of money, the new possibilities it opened. Now we didn’t have to drive to Valencia. We didn’t have to worry about customs or airport security. The jet, like everything else, was now part of our tool box.

The engines revved, the wheels went up, and we were airborne. Below, we could see the Côte d’Azur, the mansions, the yachts; it felt surreal, like a fantasy world. In the plane, my lateness was forgiven. Lance was confident, happy, excited, and it was contagious. The confident feeling increased when we landed in Valencia and were met on the runway by the Postal team: Johan, Pepe Martí, and del Moral. They showed up with sandwiches, bocadillos—it was important to have a little something in our stomachs beforehand.

From the airport, we drove south for half an hour through a marshland as Johan and del Moral talked about the transfusion. It would be so simple, they said. So easy. Extremely safe, nothing at all to worry about. I noticed Johan talked more to Kevin and me than to Lance, and that Lance didn’t seem to pay attention; I got the feeling this wasn’t Lance’s first transfusion.

We pulled up near the village of Les Gavines at a beached whale of a hotel called the Sidi Saler, luxurious and quiet, free of the tourists who’d be arriving later in summer. We’d already been checked in; we took the elevator up to the fifth floor, moving through the deserted hallways. Kevin and I were directed into one room facing the parking lot; Lance got his own room next door.

I had expected to see a sophisticated medical setup, but this looked more like a junior- high science experiment: a blue soft- sided cooler, a few clear plastic IV bags, cotton balls, some clear tubing, and a sleek digital scale. Del Moral took over.

Lie on the bed, roll up your sleeve, give me your arm. Relax.

He tied a blue elastic band below my biceps, set an empty transfusion bag on a white towel on the floor next to the bed, and wiped the inside of my elbow with an alcohol swab. Then the needle. I’d seen a lot of needles, but this one was huge—about the size and shape of a coffee stirrer. It was attached to a syringe that was in turn attached to clear tubing that led to the waiting bag, with a small white thumb wheel to control flow. I looked away; felt the needle go in. When I looked again, my blood was pumping steadily into the bag on the floor.

You often hear “blood transfusion” tossed around in the same breath as “EPO” or “testosterone,” as if it’s all equivalent. Well, it’s not. With the other stuff, you swallow a pill or put on a patch or get a tiny injection. But here you’re watching a big clear plastic bag slowly fill up with your warm dark red blood. You never forget it.

I looked over to see Kevin hooked up in the same way. We could see our reflections on the closet-door mirror. We tried to cut the tension by comparing the speed with which our respective bags were filling: Why are you going so slow? I’m dropping you, dude. Johan shuttled between the rooms, checking on us, making small talk.

Every so often Pepe or del Moral would kneel down and take the bag in their hands, tilting it gently back and forth, mixing it with anticoagulant. They were gentle because, as they explained, the red blood cells were alive. If the blood was mishandled— shaken or heated, or left in a refrigerator beyond four weeks or so—the cells would die.

Filling the bags took about fifteen or twenty minutes. The bags plumped up until the scale showed we were done: one pint, 500 milliliters. Then, unhook: needle out. Cotton ball, pressure. Bags taped closed, labeled, and tucked into the blue cooler. Del Moral and Pepe headed out; they didn’t say where, but we guessed it was to the clinic in Valencia and the refrigerator there, where the bags would be stored until we needed them three weeks later at the Tour.

Inside the Hidden World of the Tour de France 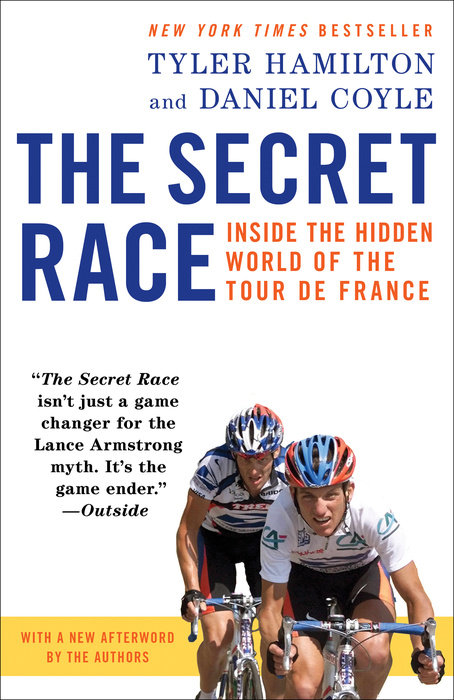