An editor at This American Life reveals the searing story of the secret binge-eating that dominated her adolescence and shapes her still.

“Her tale of compulsion and healing is candid and powerful.”—People

For almost thirty years, Susan Burton hid her obsession with food and the secret life of compulsive eating and starving that dominated her adolescence. This is the relentlessly honest, fiercely intelligent story of living with both anorexia and binge-eating disorder, moving past her shame, and learning to tell her secret.

When Burton was thirteen, her stable life in suburban Michigan was turned upside down by her parents’ abrupt divorce, and she moved to Colorado with her mother and sister. She seized on this move west as an adventure and an opportunity to reinvent herself from middle-school nerd to popular teenage girl. But in the fallout from her parents’ breakup, an inherited fixation on thinness went from “peculiarity to pathology.”

Susan entered into a painful cycle of anorexia and binge eating that formed a subterranean layer to her sunny life. She went from success to success—she went to Yale, scored a dream job at a magazine right out of college, and married her college boyfriend. But in college the compulsive eating got worse—she’d binge, swear it would be the last time, and then, hours later, do it again—and after she graduated she descended into anorexia, her attempt to “quit food.”

Binge eating is more prevalent than anorexia or bulimia, but there is less research and little storytelling to help us understand it. In tart, soulful prose Susan Burton strikes a blow for the importance of this kind of narrative and tells an exhilarating story of longing, compulsion and hard-earned self-revelation.

An excerpt from Empty

“Diet” is a strange word, one that describes both a deviation from the norm and the norm itself: the foods that make up a day, a week, a lifetime.

From the beginning, my diet was a big part of my story, even the one others told about me. “All babies like rice cereal,” my mother will say. “But you didn’t.”

In the high chair, I would tighten my lips and turn away.

When I was two, I started preschool. At the first parent–­teacher conference, they told my mother, “Susan never eats snack.”

The information didn’t surprise her. I refused so many foods that she’d come up with novel ways to get them into me. In the morning I would sit at the kitchen table and she would crack an egg into a sippy cup and mix in cranberry juice. When she set the cup before me, I’d peer down the hole at the thick drink. Beside the cup would be a colored vitamin, its surface rough like construction paper. My mother would be emptying the dishwasher, the radio going. Occasionally the voice of my father, the news director of a local station, would come through the speaker: This is W-­O-­O-­D WOOD Radio, and I’m Bob Burton. I was so small that the white Tulip chair was big around me, like a throne. I’d sneak the vitamin under the seat cushion—­grainy beneath there, with crumbs and small tan-­foam flecks—and ignore the drink.

Recalling encounters with foods I disliked as a small child raises an old alarm in me. A sip of a soda at the zoo one afternoon, the prickling shock of the bubbles. It would be more than a decade before I would try something fizzy again. Melba toast at a white-­tablecloth restaurant in Chicago. The next day, I vomited. The bright yellow worm of mustard on a hot dog at a public beach. The jagged chopped nuts on a hot fudge sundae, even though I’d asked for it plain. In any choice about food, I always preferred plain.

I went through primary school never eating a salad or a single bite of fruit. And it wasn’t just healthy foods I disliked. It was basic kid things like sugar cereal and potato chips. I couldn’t tolerate flavors in drinks. The only ones I liked were milk and water. No Coke, no apple cider, no orange juice. No Kool-­Aid, no Capri Sun, no etc., etc., etc.

I was always steeling myself for things like sleepovers and school trips where you went overnight to nature camp—­not because I dreaded being away from home, but because of what food might be served to me elsewhere.

But as embarrassing as it was to overhear someone alerting the mother of the birthday girl that “Susan doesn’t like pizza” or to go up to a vendor and order a “Plain sno-­cone; yes, just the ice,” I never wavered, even when I knew my behavior had been registered as rude or strange. I never once even pretended to take a bite of red licorice or a sip of the shamrock shake. I could never, would never, let these things in.

The term “picky eater” didn’t apply to me. Picky eaters had to be reminded to pay attention to their plates. But I never forgot about food, in the way you never forget about anything you fear. A picky eater was indifferent, but I was vigilant. I stayed away from food self-­protectively, the same way, as a small child playing on the floor, I had steered clear of the round red tins my mother used to poison ants.

I got my first period when I was ten. I was sitting on a beanbag in the reading corner at school. I was wearing madras Bermuda shorts and my legs were spread a little bit. My friend Vickie kept looking away, like she was embarrassed for me, and suddenly I felt frightened, because I knew what she was trying not to see.

In sex ed when we were nine, they had told us that at ten we could start. Since the moment I learned this information, it had been ticking inside me. Now the timer had gone off, and my years of being good and normal had come to an end.

There was no real reason I knew this. It was just a fact that I owned. I knew it the same way I knew my parents would get divorced. Someday I would be a child with the name of only one parent beside hers on the class list.

I could see this line of text as clearly as if the sheet had already been handed out.

Later that afternoon, at home in my bedroom, I showed my mother my underwear. My bedroom had a Laura Ashley wallpaper border of garden roses and the pink-­and-­white four-­poster that had been my mother’s when she was a little girl in Connecticut. My mother said menstruating early was “in our family.” Then she went to the bathroom for a pad. I stood there in the alcove, waiting. It was like being sick: feeling helpless, stalled, hearing the regular sounds of everyone moving in the house around you.

My mother returned and showed me how to stick the pad into my underwear. There was no belt, like in Are You There God? It’s Me, Margaret. I had never understood that book, in which the girl yearns for her period instead of dreading it.

Of course, Margaret was twelve. I was ten. It was against nature to get it that soon; I wasn’t equipped to deal with it yet.

The madras shorts were in a heap on the floor. My mother picked them up and took them to the bathroom. I heard the thunk of the drain being closed and then the gushing tap. Beside the open window, I fastened a new pair of shorts. The ruffled blind was up, but the neighbors across couldn’t see in. Our suburban street was wide, the lawns wooded. My mother told me that where we lived had once been a forest. A forest: That was a place you lived in a fairy tale or a fantasy series.

It was September 1984, and we were a family in Michigan.

We lived near Grand Rapids, a small city in the western part of the state. Out in our rural suburb, there were farms, roller-­coaster hills, and rivers. Families water-­skied out of the backyards of their mock Tudors. Most people had a history in this region, but not my parents, and my early, defining relationship to my environment was a feeling of being not from here, even though I had never lived in any other place.

My parents had grown up in the Northeast and met while they were both in college. They married in 1969, a year after they graduated, my father from Yale and my mother from Smith. My father was building a career in radio news, and a relative on my mother’s side owned WOOD. My parents moved to Grand Rapids and settled into a routine. My father rose for work each morning at three-­thirty. My mother got up with him to make his breakfast and lay out his clothes and his shoes, which she polished, cross-­legged on the floor before his closet. My father did not want my mother to work. My mother did want to work, but she did not know any way to be around a man but acquiescent. So she joined the Smith Club and the Junior League. And she worked as a kind of stringer for my father, scouring the newspapers for leads.

She had always longed to be a mother, and when she got pregnant with me, she immersed herself in the literature of child development. She drank a quart of milk a day, like the doctor told her to. Her water broke in the grocery-­store checkout aisle, plastic jugs of Country Fresh in her cart.

I was a fretful baby. My mother told the doctor, “She never stops crying,” and he dismissed her: “All babies cry.” But it was true. As a baby I cried at all times except when bunched up in a corduroy pouch my mother strapped to her chest. Then one morning when I was five months old, she set me on the changing table, unpinned my diaper, and saw a purple bulge beneath the skin. She was scared but relieved: Here was an explanation. I had been born with an inguinal hernia. My intestines slipped through my abdominal wall, and the carrier comforted me because it pushed the protrusion back into place.

When I consider the story of my infancy now, it seems noteworthy that what soothed me was not nursing but being held in the pouch. It’s possible that I did not form an association with food as comfort in the usual way.

Susan Burton’s writing has appeared in Slate, Mother Jones, New York, The New Yorker, and The New York Times Magazine. She is a former editor of Harper’s and a producer of This American Life. Her radio documentaries have won numerous awards. The film Unaccompanied Minors is based on one of her radio essays. She lives in Brooklyn with her husband and their two sons. 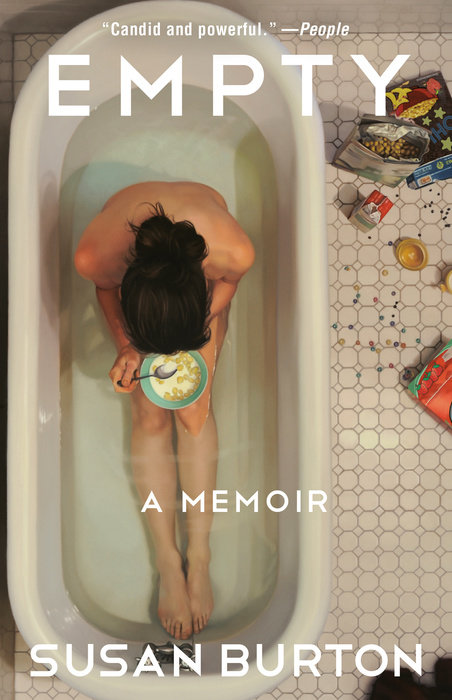