NEW YORK TIMES BESTSELLER • The bestselling author of The Tiger’s Wife returns with “a bracingly epic and imaginatively mythic journey across the American West” (Entertainment Weekly).

In the lawless, drought-ridden lands of the Arizona Territory in 1893, two extraordinary lives unfold. Nora is an unflinching frontierswoman awaiting the return of the men in her life—her husband, who has gone in search of water for the parched household, and her elder sons, who have vanished after an explosive argument. Nora is biding her time with her youngest son, who is convinced that a mysterious beast is stalking the land around their home.

Meanwhile, Lurie is a former outlaw and a man haunted by ghosts. He sees lost souls who want something from him, and he finds reprieve from their longing in an unexpected relationship that inspires a momentous expedition across the West. The way in which Lurie’s death-defying trek at last intersects with Nora’s plight is the surprise and suspense of this brilliant novel.

Mythical, lyrical, and sweeping in scope, Inland is grounded in true but little-known history. It showcases all of Téa Obreht’s talents as a writer, as she subverts and reimagines the myths of the American West, making them entirely—and unforgettably—her own.

“As it should be, the landscape of the West itself is a character, thrillingly rendered throughout. . . . Here, Obreht’s simple but rich prose captures and luxuriates in the West’s beauty and sudden menace. Remarkable in a novel with such a sprawling cast, Obreht also has a poetic touch for writing intricate and precise character descriptions.”—The New York Times Book Review (Editors’ Choice)

“Obreht is the kind of writer who can forever change the way you think about a thing, just through her powers of description. . . . Inland is an ambitious and beautiful work about many things: immigration, the afterlife, responsibility, guilt, marriage, parenthood, revenge, all the roads and waterways that led to America. Miraculously, it’s also a page-turner and a mystery, as well as a love letter to a camel, and, like a camel, improbable and splendid, something to happily puzzle over at first and take your breath away at the end.”—Elizabeth McCracken, O: The Oprah Magazine

An excerpt from Inland

When those men rode down to the fording place last night, I thought us done for. Even you must realize how close they came: their smell, the song of their bridles, the whites of their horses’ eyes. True to form—blind though you are, and with that shot still irretrievable in your thigh—you made to stand and meet them. Perhaps I should have let you. It might have averted what happened tonight, and the girl would be unharmed. But how could I have known? I was unready, disbelieving of our fate, and in the end could only watch them cross and ride up the wash away from us in the moonlight. And wasn’t I right to wait—for habit if nothing else? I knew you had flight in you yet. You still do; as do I, as I have all my life—since long before we fell in together, when I first came round to myself, six years old and already on the run, wave-rocked, with my father in the bunk beside me and all around the hiss of water against the hull. It was my father running back then, though from what I never knew. He was thin, I think. Young, perhaps. A blacksmith perhaps, or some other hard-laboring man who never caught more rest than he did that swaying month when night and day went undiffered, and there was nothing but the creak of rope and pulley somewhere above us in the dark. He called me sìne, and some other name I’ve struggled lifelong to recall. Of our crossing I remember mostly foam veins and the smell of salt. And the dead, of course, outlaid in their white shrouds side by side along the stern.

We found lodging near the harbor. Our room overlooked laundry lines that crosshatched from window to window until they vanished in the steam of the washhouse below. We shared a mattress and turned our backs to the madman across the room and pretended he wasn’t a bit further gone each day than the last. There was always somebody shrieking in the halls. Somebody caught between worlds. I lay on my side and held the lapel of my father’s coat and felt the lice roving through my hair.

I never met a man so deep-sleeping as my father. Dockwork will do that, I reckon. Every day would find him straining under some crate or hump of rope that made him look an ant. Afterwards, he’d take my hand and let the river of disembarking bodies carry us away from the quays, up the thoroughfare to where the steel scaffolds were rising. They were a marvel to him, curious as he was about the world’s workings. He had a long memory, a constant toothache, and an abiding hatred of Turks that tended to flare up when he took tea with likeminded men. But a funny thing would happen if ever some Serb or Magyar started in about the iron fist of Stambul: my father, so fixed in his enmity, would grow suddenly tearful. Well, efendi, he’d say. Are you better off now? Better off here? Ali-Pasha Rizvanbegović was a tyrant—but far from the worst! At least our land was beautiful. At least our homes were our own. Then would follow wistful reminiscences of his boyhood village: a tumble of stone houses split by a river so green he had no word for it in his new tongue, and had to say it in the old one, thus trapping it forever as a secret between the two of us. What I’d give to remember that word. I could not think why he would leave such a town for this reeking harbor, which turned out to be the kind of place where praying palms-up and a name like Hadziosman Djurić got him mistaken for a Turk so often he disowned both. I believe he called himself Hodgeman Drury for a while—but he was buried “Hodge Lurie” thanks to our landlady’s best guess at the crowded consonants of his name when the hearse came to take his body away.

Our mattress, I remember, was stained. I stood on the stairs to watch the Coachman load my father into his wagon. When they drove off the Landlady put her hand on my head and let me linger. The evening downpour had withdrawn, so a sunset reddened the street. The horses looked ablaze. After that, my father never came to me again, not in the waters, not even in dreams.

That Landlady prayed night after night before a cross on the wall. Her mercy got me hard bread and a harder mattress. In return, I took to praying with my palms together and helped tend her lodgings. Ran up and down stairs with buckets of soapwater, hunted rats, wedged myself up chimneys. Staring men who sat in the shadows sometimes lunged for me. I was a skin-and-bones kid, but unafraid enough of stairwell drunks to kick them while they slept, so they learned to leave me alone. Another summer, another plague, another visit from the Coachman and his black horses. Another and another. A mess of script appeared on our curbpost. Can you read that? the Landlady asked me. It says “pesthouse”—do you know what “pesthouse” means? It turned out to mean empty rooms, empty purse, empty bellies for us both. When the Coachman next came around, she sent me away with him. Just stood there, staring down at the coin he put in her hand.

I bunked in the Coachman’s stable for a year. He was the cleanest man I ever knew. Couldn’t get to sleep without his house just so and his slippers side by side under the bed. The only unevenness to him was an upper tooth that had come in a tusk, giving him the look of a fancy rat. Together we went round the dens and fleahouses on Bleecker Street to collect the dead: lodgers who’d passed in their sleep, or had their throats cut by bunkmates. Sometimes they were still in their beds with the sheets drawn over them when we arrived. But just as often we’d find them folded into trunks or stuffed under floorboards. Those with cash and kin we took to the undertaker. The nameless we drove to uptown hospitals and delivered through back doors so they could be tabled before wakes of looming young men. Their innards laid out. Their bones boiled white.

When trade was slow, we’d have to pull them from churchyards. Two dollars to the gatekeep to look the other way while we walked among the crosses searching out newly turned mounds. The Coachman would start a tunnel where he guessed the head might be, and I would wedge down, shoulders and arms, all the way into the cold earth and stab forward with my iron until I broke the coffinboards. Then I’d feel about with my fingers till I found hair or teeth, and ease a noose over the head. It took both of us to pull them out.

“Still easier than digging them up,” was the Coachman’s reasoning.

Once, we found two people sharing a coffin, face-to-face, as though they’d fallen asleep in it together. Once, I put my hand in and felt only the give of earth and the damp velvet of the pillow. “Someone’s beat us here,” I said. “It’s empty.”

Once, I broke through the boards and moved my fingers over coarse hair and skin and was just getting the rope past a reef of jawbone when fingers grabbed my wrist somewhere in the dark. They were dry fingers, hard-tipped. I started and dirt flew down my throat and into me. I kept kicking, but the fingers held on till I thought I’d disappear down that hole. “Please, I can’t do it again,” I sobbed afterwards—but I could, it turned out, with a broken wrist, and a twisted shoulder, too.

Once, a great big fella got stuck halfway out his coffin. I sat there in the dirt with his pale arm on my knees until the Coachman handed me a saw. I carried that arm all the way uptown, wrapped in its own burlap sleeve, on my shoulder like a ham. Some evenings later, I saw that same rent sleeve on a one-armed giant who stood unmoving in the fishmarket crowd. He was pale and round and stood smiling shyly at me, as though we were old friends. He drifted closer, hugging that empty sleeve, till he stood at my side. It seems an odd thing to say, but a thin tickle spread around me, and I knew he’d put his ghost arm about my shoulders. That was the first I ever got this strange feeling at the edges of myself—this want. He let forth a rueful sigh. As if we’d been talking all the while. “God,” he said. “God I’ve an awful hunger. I’d love a nice cod pie. Wouldn’t you, little boss?”

Téa Obreht is the author of The Tiger’s Wife, a finalist for the National Book Award. She was born in Belgrade, in the former Yugoslavia, in 1985 and has lived in the United States since the age of twelve. She currently lives in New York City and teaches at Hunter College.

To inquire about booking Téa Obreht for a speaking engagement, please contact the Penguin Random House Speakers Bureau at speakers@penguinrandomhouse.com. 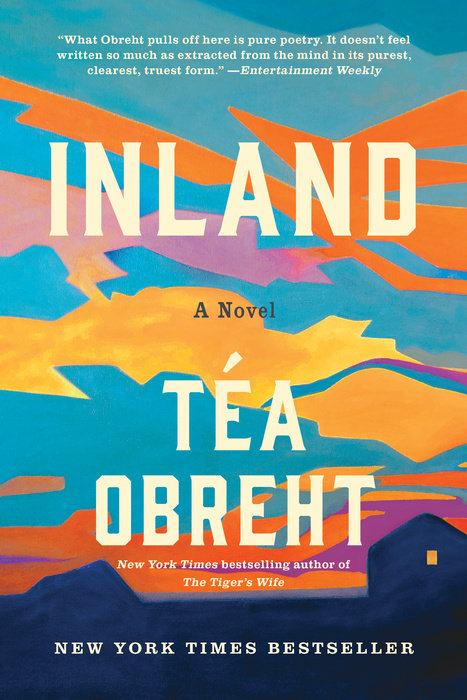