NEW YORK TIMES BESTSELLER • From Portland's most acclaimed and beloved baker comes this must-have baking guide, featuring recipes for world-class breads and pizzas and a variety of schedules suited for the home baker.

There are few things more satisfying than biting into a freshly made, crispy-on-the-outside, soft-and-supple-on-the-inside slice of perfectly baked bread. For Portland-based baker Ken Forkish, well-made bread is more than just a pleasure—it is a passion that has led him to create some of the best and most critically lauded breads and pizzas in the country.

In Flour Water Salt Yeast, Forkish translates his obsessively honed craft into scores of recipes for rustic boules and Neapolitan-style pizzas, all suited for the home baker. Forkish developed and tested all of the recipes in his home oven, and his impeccable formulas and clear instructions result in top-quality artisan breads and pizzas that stand up against those sold in the best bakeries anywhere.

Whether you’re a total beginner or a serious baker, Flour Water Salt Yeast has a recipe that suits your skill level and time constraints: Start with a straight dough and have fresh bread ready by supper time, or explore pre-ferments with a bread that uses biga or poolish. If you’re ready to take your baking to the next level, follow Forkish’s step-by-step guide to making a levain starter with only flour and water, and be amazed by the delicious complexity of your naturally leavened bread. Pizza lovers can experiment with a variety of doughs and sauces to create the perfect pie using either a pizza stone or a cast-iron skillet.

Flour Water Salt Yeast is more than just a collection of recipes for amazing bread and pizza—it offers a complete baking education, with a thorough yet accessible explanation of the tools and techniques that set artisan bread apart. Featuring a tutorial on baker’s percentages, advice for manipulating ingredients ratios to create custom doughs, tips for adapting bread baking schedules to fit your day-to-day life, and an entire chapter that demystifies the levain-making process, Flour Water Salt Yeast is an indispensable resource for bakers who want to make their daily bread exceptional bread.


It’s been five hundred years since I opened Ken’s Artisan Bakery in Portland, Oregon. That’s in bakery years, of course. My bakery actually opened in 2001. I had recently left a nearly twenty-year corporate career for the freedom of running my own venture and doing something I loved. In the time leading up to this risky transition, before I knew what that venture would be, I yearned for a craft and wanted to make a living doing something I could truly call my own. But I was itchy and I didn’t know where to scratch! For many years, I waited for that lightbulb moment of awareness that would signal an open path worth taking. Then, in the mid-1990s, my best friend gave me a magazine featuring the famed Parisian baker Lionel Poilâne. That article gave me the inspiration I was looking for. Not long after that, I began making frequent trips to Paris, and I was deeply inspired by the authentic, tradition-bound boulangeries I visited there. After a few years and a series of evolving ideas, I ended up with a perhaps naive plan to open a French bakery somewhere in the United States. My hope was to re-create the style and quality of the best breads, brioches, croissants, cannelés, and other specialties found at boulangeries and patisseries all over France.

My ensuing career transition was more Mr. Toad’s Wild Ride than simple job change. You could say I answered the call of that ancient Chinese curse: “May you live in interesting times.” But I came out on the other side with a firm love of the baker’s craft, acknowledging it as much more hard work than romance. The daily rhythms of life as a professional baker, once nearly overwhelming, now provide comfort. The aromas, the tactile nature of the work, and the way the finished products look takes me to a faraway place that is still present, and to have that be the way I spend my days continues to thrill me.

I was fortunate to train with many excellent bakers in the United States plus two in France during the two-year between-careers period before I opened my own bakeshop in Portland. What struck me during my professional baking training was that the most important lessons I was learning—how to use long fermentation, pre-ferments, autolyse, and temperature management, for example—were not discussed in any of the bread books I had read. I later encountered books that did detail these things (like those by Raymond Calvel and Michel Suas), but they were targeted to the professional. I was sure that the techniques I had learned could apply to the home baker too.

In the years that followed the opening of Ken’s Artisan Bakery, several notable baking books were published. But I still saw an opportunity to address the techniques used in a good artisan bakery and how they could be adopted for the home kitchen. I wanted to write a book that didn’t totally dumb down these techniques, since the concepts really aren’t that difficult for the nonprofessional baker to apply. And I wanted to break from the mold prevalent in almost every bread book out there (at least until very recently): that every recipe had to use a rise time of just one to two hours. Further, I was completely motivated to demonstrate how good bread can be when it’s made from just the four principle ingredients: flour, water, salt, and yeast.

I also saw the opportunity to address how to make great bread at home with each of the three principle techniques of dough fermentation: straight doughs, doughs made with pre-ferments, and levain doughs, including an easy, unintimidating method for making a levain culture from scratch in just five days using only whole grain flour and water.

In order to accurately use this book’s recipes and follow its logic, I ask you to use an inexpensive digital kitchen scale to execute the recipes and to help you understand baking. One of the fundamentals of artisan baking is using weight measurements instead of cups and tablespoons and being guided by the ratios of ingredients. (Don’t worry, I do all the simple math for you.) While the ingredients tables in each recipe do include volume conversions, these measurements are by their nature imprecise (for reasons explained in chapter 2) and they are included only to allow you to bake from this book while you are contemplating which digital kitchen scale to buy.

My purpose in writing this book is twofold: First, I want to entice novices to bake, so it is written for a broad audience. Total beginners can dive right in with one of the entry-level recipes, the Saturday Breads, for example, right after reading chapter 4, Basic Bread Method. Once you feel comfortable with the timing and techniques involved in those breads, try recipes that involve an extra step, like mixing a poolish the night before. Once you have mastered the poolish and biga recipes, try making a levain from scratch and enjoy the particular pleasures of bread or pizza dough made with this culture. By the time you work your way through this book, you will be baking bread in your home kitchen that has a quality level approaching that of the best bakeries anywhere, along with Neapolitan-style pizza that would make your nonna smile.

Second, this book is also written for more experienced bakers who are looking for another approach to making dough—one that treats time and temperature as ingredients—and who are perhaps looking for an accessible (or just different) method for making great-tasting levain breads. Mixing dough by hand, a process used in all this book’s recipes, may also be new. To me, one of the most unique and important aspects of bread baking is its tactile nature. In asking you to mix the dough by hand, I am also asking you to think of your hand as an implement. Mixing by hand is easier than using a mixer, is fully effective, and teaches you the feel of the dough. People have been mixing dough by hand for thousands of years. If our ancestors did it, we can. And if you haven’t done it before, I hope you get great satisfaction from the process and feel a connection to the past and the history of baking, like I do

After a twenty-year career in the tech industry, KEN FORKISH decided to leave Silicon Valley and corporate America behind to become a baker. He moved to Portland, Oregon, and opened Ken's Artisan Bakery in 2001, followed by Ken's Artisan Pizza in 2006 and Trifecta Tavern in 2013. His first book, Flour Water Salt Yeast, won both a James Beard and IACP award. 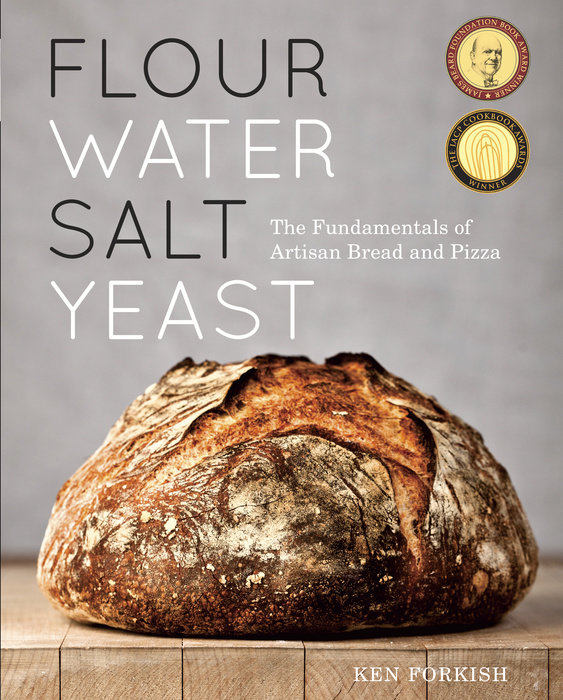