The Simple, Nonnegotiable Principles for Getting to Thin

With so much conflicting weight-loss advice out there to confuse your efforts, it’s no wonder you haven’t been successful losing weight and keeping it off. But with Bob Harper, superstar trainer and co-host of NBC’s hit show The Biggest Loser as your personal authority and coach, you can and will finally shed the pounds—whether you want to lose two or two hundred!

Distilling Bob’s vast knowledge of nutrition, weight-loss strategy, and human nature down to twenty simple, nonnegotiable principles, The Skinny Rules will help you step away from a reliance on processed foods and the need for so much sweet and salt and step into a newly thin lifestyle. And Bob’s methods couldn’t be more straightforward.

Taking the guesswork out of implementing the Skinny Rules, Bob offers a month’s worth of menu plans and more than 90 delicious, rule-abiding recipes for breakfast, lunch, dinner, and snacks to keep you cooking and eating skinny for life. You’ll be happily astounded to see the variety and volume of the tasty food on your plate! He also includes terrific tips for what to stock in your fridge and what to prepare every weekend in order to set yourself up for success during your too-busy-to-cook weekdays.

A virtual GPS to your weight-loss goals, The Skinny Rules takes the mystery out of the process, offering the fastest route to your skinny destination.

Rule #3: Eat protein at every meal, making some kind of fish your go-to protein as often as you can. Take your weight and divide it by two—that’s more or less how much protein you should be eating in grams every day.

Rule #15: Eat at least ten meals a week at home (and cook them yourself). Restaurant portions are usually 40 to 50 percent bigger than what you’d serve at home—the more you eat out, the more you overeat. Set yourself up for success by preparing my turkey meatballs, hummus, and roasted vegetables on the weekend so that you will have go-to staples and no excuses!

Rule #18: Go to bed slightly hungry. Denied fuel for more than five hours, your body will start burning its own fat and sugar. Make a point not to eat after dinner and you’ll be burning fat while you’re sleeping.

Rule #20: Enjoy a splurge meal once a week. Unlike episodic bingeing, splurge meals are an ingredient in your diet. When you plan something, you are in control.

An excerpt from The Skinny Rules

DRINK A LARGE GLASS OF WATER BEFORE EVERY MEAL—­NO EXCUSES!

This has got to be the easiest rule there is. Which is a good place to start. But it’s also one of the most important rules there is. You simply must stay hydrated. At a minimum I want you to drink a large glass of water before every meal. But I’d prefer that you drink at least five glasses of water a day, the first one within fifteen minutes of waking.

Now, do I really need to harass you about this? I do. Because during the process of losing weight, nothing is so crucial to your success. Water keeps your organs healthy while you’re sweating, keeps food moving through the system, and makes you feel full.

Let me put this plainly: drinking water helps you lose weight. You can see this most vividly in very overweight children. Recently, a group of Israeli researchers examined the resting energy expenditure (REE) of twenty-­one obese children. REE refers to the rate at which you burn calories when you are sleeping, watching TV, or just simply sitting there and staring into space. The researchers gave the kids a large serving of cold water, then began measuring the REE every 10 minutes. The reaction was more robust than anticipated. Within 24 minutes, REE began increasing. By 57 minutes, REE had increased by 25 percent, and this effect lasted 40 minutes.

Did you get that? Just by drinking water, your body increases its burning of calories. The scientists estimated that, if you just do this, you’ll burn off an extra three pounds over the next year.

That doesn’t sound like a lot, but I’ll take it. Won’t you?

The contestants on The Biggest Loser are usually chronically dehydrated, and their collective experience shows another reason to drink lots of water. They are usually pretty big consumers of salt before they come on the show. They eat it unknowingly—­in the fried and highly processed foods that are their usual mealtime fare and that helped make them so overweight in the first place—­and knowingly; too many of them often add salt to whatever they are served. They are usually eating so much salt that they have begun to mess up the delicate mechanisms of chemical balance so vital to our bodies. When the kidneys are swamped with salt and without adequate liquids, you don’t get enough potassium. That and other minerals are absolutely key to weight loss.

And as my private fitness clients have shown me, drinking more water helps in other physical ways as well. When they start conscientiously drinking lots of water, their workouts improve. They get less muscle fatigue, they recuperate faster, and they don’t feel groggy in the afternoon.

Make it your premeal policy: drink a large glass of water before every meal. No excuses.

End the day with preparation for a good start to the next: put a large, full glass of water on your bedstand every night and drink it when you wake up, every morning.

Get a little extra bang for your effort: mix a pitcher of water with a noncaloric vitamin and mineral supplement. I like ElectroMix (one little packet makes a quart), and having the pitcher all mixed and right in front of you will make it that much easier to pour yourself a glass when you open the fridge at every meal; I usually drink mine when I work out.

Caloric beverages steal your health and they steal great food from you. That’s right. They steal it because they are so heavily caloric themselves and will fill you up with all the wrong stuff. Think of the kinds of caloric beverages all around you.

Soft drinks: As you heft one of those cans or buckets of sugar water to your mouth, consider that you are actually eating the equivalent of what should be your entire lunch.

I came to this rule while working on TBL. When I reviewed their pre-­TBL meal plans I saw that most contestants were drinking Big Gulps or other massive jugs of soda that had 500 calories. Some people would nurse several of them during the day (that’s upwards of 1,500 calories of soda a day!). Think of it this way: all that corn syrup? It’s a bushel of corn! And remember, when factory farms want to fatten their cattle, what do they do? They feed them corn. So if you are drinking things with corn syrup, think about that. Are you a cow? No you are not.

Moreover, when you drink soda, you are ingesting what just about every legitimate medical authority in the world has named as suspect number one in today’s sprawling diabetes epidemic. A friend of mine tells me that his teenage kids really got the message a few years ago when their father was diagnosed. Now, when a family member asks for a soda, they cheerily reply: “Sure. What kind of diabetes do you want?”

Out of the mouths of babes.

If, like most Americans, you are used to drinking lots of liquid calories, cutting out soda might be a tough adjustment. But it’s essential that you kick your soda habit ASAP. If you’re a full-­calorie soda drinker, you’re guzzling empty and unsatisfying calories. If you’re a diet/zero-­calorie soda drinker, you haven’t dodged the problem. Hello?! You’re guzzling artificial sweeteners and, as you’ll hear again and again in this book, I don’t think highly of these at all. They only serve to whet your appetite for more sweet! Stop the madness. Kick the habit.

To help wean yourself from your soda habit, start experimenting with other flavored, noncaloric drinks that you can make yourself. Try seltzer water with lime or lemon juice. Stock up on unsweetened, naturally flavored herb teas. Make a quart or so at a time and keep it in the refrigerator to go with your afternoon snack. And there is my tried-­and-­true alternative—­the “soda eliminator” described in Rule 15. Check it out.

Juices and juice drinks: Most juices have exactly the same number of calories—­and the same amount of simple sugars—­as a cola. Oh, you’ll protest, but doesn’t the fiber in a “natural” juice obviate that problem? No. That’s just what you’ve been told. It is the same as drinking a soft drink. You want fruit? Eat fruit. The whole piece of fruit. Not the extracted and manipulated juice.

Yeah, well, juice smoothies are healthy, right? Maybe “healthy” if you order one with no preservatives or added sugar, but regardless, fruit smoothies that you haven’t made yourself (i.e., you have controlled the portions and know exactly what’s gone in it) will make you as fat as a Macy’s Thanksgiving Day Parade float—­just like a 32-ounce soda.

Energy replacement drinks: Well, yeah—­if you’re training for a marathon. Otherwise, look at the label! A 20-­ounce sports drink—­let’s face it, that’s how much you’ll “need” to quench that big thirst—­weighs in at 130 calories. Like a 12-­ounce cola, but without the nifty zing of bubbles and caffeine. I’ve always seen drinks like these as particularly insidious, because they are, in our heads at least, deeply associated with sports, which are deeply associated with health and fitness. You have to break that connection.

Bob Harper is a world-renowned fitness trainer and the longest-reigning star of the NBC reality series The Biggest Loser, which has run for sixteen seasons, and counting. He has released several popular fitness DVDs and is the #1 New York Times bestselling author of The Skinny Rules, Skinny Meals, and Jumpstart to Skinny. Harper lives in Los Angeles.

Greg Critser is a longtime science and medical journalist. The co-author of Bob Harper’s The Skinny Rules and Jumpstart to Skinny, Critser is also the author of the international bestseller Fat Land: How Americans Became the Fattest People in the World. He lives in Pasadena, California.

The Simple, Nonnegotiable Principles for Getting to Thin 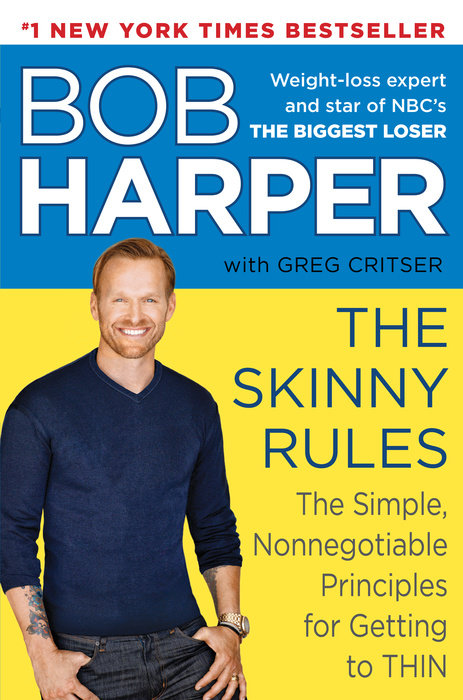