Although Thomas Alva Edison was the most famous American of his time, and remains an international name today, he is mostly remembered only for the gift of universal electric light. His invention of the first practical incandescent lamp 140 years ago so dazzled the world—already reeling from his invention of the phonograph and dozens of other revolutionary devices—that it cast a shadow over his later achievements. In all, this near-deaf genius (“I haven’t heard a bird sing since I was twelve years old”) patented 1,093 inventions, not including others, such as the X-ray fluoroscope, that he left unlicensed for the benefit of medicine.

One of the achievements of this staggering new biography, the first major life of Edison in more than twenty years, is that it portrays the unknown Edison—the philosopher, the futurist, the chemist, the botanist, the wartime defense adviser, the founder of nearly 250 companies—as fully as it deconstructs the Edison of mythological memory. Edmund Morris, winner of the Pulitzer Prize and the National Book Award, brings to the task all the interpretive acuity and literary elegance that distinguished his previous biographies of Theodore Roosevelt, Ronald Reagan, and Ludwig van Beethoven. A trained musician, Morris is especially well equipped to recount Edison’s fifty-year obsession with recording technology and his pioneering advances in the synchronization of movies and sound. Morris sweeps aside conspiratorial theories positing an enmity between Edison and Nikola Tesla and presents proof of their mutually admiring, if wary, relationship.

Enlightened by seven years of research among the five million pages of original documents preserved in Edison’s huge laboratory at West Orange, New Jersey, and privileged access to family papers still held in trust, Morris is also able to bring his subject to life on the page—the adored yet autocratic and often neglectful husband of two wives and father of six children. If the great man who emerges from it is less a sentimental hero than an overwhelming force of nature, driven onward by compulsive creativity, then Edison is at last getting his biographical due.

An excerpt from Edison

At seventy-three, with his wartime career as president of the Naval Consulting Board behind him, Edison tried to make sense of a new intellectual order that challenged everything he had learned of Newtonian theory. Abstract thought did not come easily to him. “My line of sorrow,” he wrote, “lies in the realm of technical science.” He needed to feel things come together under his hands, see the filament glow, smell the carbolic acid, and—as far as possible for a near-deaf man—hear the “molecular concussions” of music.1

Laws such as those of Faraday’s electromagnetic induction and Ohm’s relation of current, voltage, and resistance he understood, having applied them himself in the laboratory. But now, if only to slow as much as possible the entropy of his own particles (the fate of all systems, according to Lord Kelvin), Edison studied Einstein’s general theory of relativity.2 The recent solar eclipse had persuaded him, along with the academic scientists he mocked as “the bulge-headed fraternity,” that the theory was valid—even if it failed to suggest any correlation between his attempt to measure the total eclipse of 1878 and his subsequent perfection of incandescent electric light.3

The urtext of the theory, as translated by Robert Lawson, defeated him after only eleven pages. “Einstein like every other mathematical mind,” he scrawled in the margin of his copy, “has not the slightest capacity to impart to the lay mind even an inkling of the subject he tries to explain.” He turned for help to an interpretive essay—Georges de Bothezat’s “The Einstein Theory of Relativity: A Glance into the Nature of the Question”—and filled thirty-one notebook pages with scrawled paraphrases of its main points.4

Gravitation is due to the retardation in velocity of the ultimate particle in passing through the fixed aggregates of matter. Ultimate particles fill the whole of space and proceed in every direction. . . .

He could imagine that at least in terms of his own observation, forty years before, of the thermionic emission of carbon electrons in a lightbulb after evacuation—a mysterious darkening since known as the “Edison Effect.” It was about as far as he ever got in his search for a “new force” in electrochemistry. Disparaged at the time by his peers, he now knew that he had discovered, if not recognized, the phenomenon of radio waves eight years before Heinrich Hertz.

Wireless waves cannot proceed thru space but thru Matter in combination with the ultimate particle. . . . From this, if true, all matter is formed of the same material.

Edison had once teased a science fiction writer with the notion of interchanging atoms of himself with those of a rose. He noted that Einstein envisaged particles in space with common axes converging into solidly constituted “rings,” while others remained ethereal. Hence the “primal ring” of the solar system, with its interplanetary nothingness.

We now have matter in a form which is polar & capable of producing what we call Magnetism & Electricity.

The religion boys, of course, would protest that what drew particles together was the will of God. Edison was as ready as Einstein to believe in a “Supreme Intelligence” made manifest by the order and beauty of the stars, and equally reluctant to personalize it: “I cannot conceive such a thing as a spirit.” The furthest he would go in the direction of metaphysics was to imagine the subcellular particles of a human being as “infinitesimally small individuals, each itself a unit of life.”5

These units work in squads—or swarms, as I prefer to call them—and . . . ​live for ever. When we “die” these swarms of units, like a swarm of bees, so to speak, betake themselves elsewhere and go on functioning in some other form or environment. If the units of life which compose an individual’s memory hold together after that individual’s death, is it not within the range of possibility . . . ​that these memory swarms could retain what we call the individual’s personality after the dissolution of the body?

Having thus anticipated by more than a century both swarm intelligence and DNA inheritance theory, Edison gave up trying to understand relativity and returned to the more tangible universe he preferred.

As he saw it, his first order of business in the new decade was to reimpose his own—highly individual—personality upon Thomas A. Edison, Inc., the sprawling industrial conglomerate that he had been forced to neglect during the war. He chose not to notice that it had thereby done much better than it had in earlier years, when he had run its manifold activities—phonograph and record production, movie making, cement milling, storage battery development, and laboratory research—with such autocratic willfulness as to make his executives despair of ever influencing him.

Edison was not an easy man to advise, being a combination of twinkling charm and bruising imperiousness. In his youth the charm had prevailed, but now that he was a septuagenarian and almost unreachably deaf, the urge to overbear had become a compulsion, and he had lost much of the bonhomie that had kept thousands of men working for him, and worshiping him, over the past half-century. Long gone was the perpetual hint of a smile flickering around the corners of his mouth, as if he were about to break into thigh-slapping laughter. The artist Richard Outcault remembered its radiance back in ’89, when “the boys” presented “the Old Man” with a gold and silver phonograph for his birthday. “Edison’s smile! [It] sweetened up the atmosphere of the whole building. . . . As long as I live the sweet spirit that pervaded the atmosphere of the laboratory will always remain with me.”6

Edison still moved with the jerky energy that kept him awake, and acting more decisively, than young men unable to match his eighteen-hour-a-day schedule. He regarded exercise as a waste of time, and sleep even more so. Since he was twenty, he had maintained his 175-pound, five-foot-nine-and-a-half-inch frame with only a few lapses, quickly corrected. (“I do believe I have a big bump for cookies.”) The most remarkable thing about his appearance, apart from the brilliance of the blue-gray eyes, was the largeness of his head, amplified by its thick mop of snowy hair. He wore custom-made size eight-and-a-half straw hats, and slashed the bands of his caps for comfort. His handshake was perfunctory and surprisingly cold. Monomaniacally focused on whatever current project interested him, he strode at a forward angle, hands in vest pockets, aware only of his destination and completely unconscious of time. He never wore a watch, and made no distinction between day and night, nodding off when he felt like it and expecting his assistants to follow suit. The same went for waking up. If two hours of rest was enough for him, he did not see why anyone else should want more.7

Lovable as he was—or had been in the past—Edison did not return affection, beyond the occasional beaming familiarity, in which there was often a note of tease. He thought hurtful practical jokes—electrified washbasins, a wad of chewing tobacco spat onto a white summer suit, firecrackers tossed at the bare feet of children—were funny. Having made money easily all his life, thanks to phenomenal energy and the mysterious gift of imagination (his personal wealth, at latest calculation, was almost $10 million), he was unmoved by the lesser luck or ill fortune of others, and casual about the loneliness of his wives. Now, returning to his laboratory desk in 1920, he was determined to teach Charles Edison a thing or two about running a large corporation.

Edmund Morris was born and educated in Kenya and attended college in South Africa. He worked as an advertising copywriter in London before immigrating to the United States in 1968. His first book, The Rise of Theodore Roosevelt, won the Pulitzer Prize and the National Book Award in 1980. Its sequel, Theodore Rex, won the Los Angeles Times Book Prize for Biography in 2001. In between these two books, Morris became President Reagan’s authorized biographer and wrote the national bestseller Dutch: A Memoir of Ronald Reagan. He then completed his trilogy on the life of the twenty-sixth president with Colonel Roosevelt, also a bestseller, and has published Beethoven: The Universal Composer and This Living Hand and Other Essays. Edison is his final work of biography. He was married to fellow biographer Sylvia Jukes Morris for fifty-two years. Edmund Morris died in 2019. 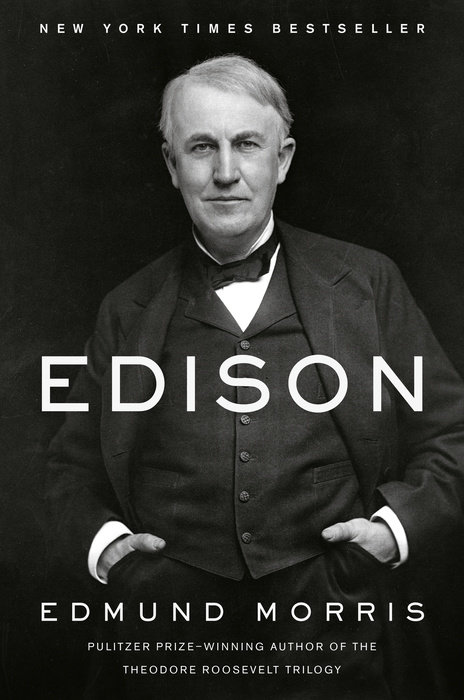