NEW YORK TIMES BESTSELLER • In the fourth novel of the Iron Druid Chronicles, two-thousand-year-old Druid Atticus O’Sullivan must pay his debts to cunning trickster god Coyote, a task that includes battling undead creatures of the night as well as a relentless hound of Hel and the goddess of death who commands it.

Cutting a deal with a trickster god rarely goes well for any human brave or foolish enough to try it, but Atticus doesn’t feel like he has a choice. With members of the Norse pantheon out for his blood, he can’t train his apprentice in peace, so he asks Coyote to help him fake his own death. The cost, however, might wind up being every bit as high as if he’d made no deal at all.

There are things hiding in the Arizona desert that don’t want any company, and Coyote makes sure they know Atticus has arrived. And then there's the hound of Hel, Garm, who’s terribly difficult to shake and not at all convinced that Atticus is dead.

Being tricked by a trickster is par for the course. But it’s the betrayal from someone he thought was a friend that shakes Atticus to the core and places his life in jeopardy. The real trick, he discovers, might be surviving his own faked death.

An excerpt from Tricked

The best trick I ever pulled off was watching myself die. I did a respectable job of it too—­the dying, I mean, not the watching.

The key to dying well is to make a final verbal ejaculation that is full of rage and pain but not tainted in the least by squeals of terror or pleas for mercy. This was my father’s wisdom—­about the only shred of it that has managed to lodge firmly in my mind all these years. He died while trying to steal somebody else’s cows.

It would be an ignominious end today, but before the common era in Ireland, it was honorable and manly to die in a cattle raid, as such theft was called. Before he left to meet his doom, my father must have had some dark premonition about it, because he shared with me all his opinions about dying properly, and I will never forget his final words: “A man’s supposed to shit himself after he dies, son, not before. Try to remember that, lad, so that when your time comes, you won’t make a right girly mess of it. Now f*** off and go play in the bog.”

Like many silly codes of bravery and manliness, the meat of my father’s instruction on how to die well can be distilled to a simple slogan: Die angry at maximum volume. (Dying silently is out of the question; the world’s last Druid should not go gentle into that good night.)

During infrequent spates of morbidity, I used to speculate on my eventual manner of death. I figured it would happen on a city street somewhere, cut off from the power of the earth, unable to summon a magical mulligan that would let me see the sunrise. But at the same time, I hoped it would be in a cool city with a bitchin’ name, like Kathmandu or Bangkok or maybe Climax, Michigan. I never thought it would be in a dried-­up place called Tuba City.

Situated in the southwestern portion of the Navajo Nation in Arizona, Tuba City rests on a red sandstone mesa with no visible means of economic support. The first question I asked when I saw it—­besides “Where are all the tubas?”—­was, “Why is anybody living here?” The red rocks may have a stark beauty to them, but beyond that Tuba City is nearly treeless, dusty, and notably lacking in modern amenities of dubious worth, like golf courses and cafeteria-­style dining. It does have a reservoir and some pastures nestled into a canyon, but otherwise it’s puzzling why nine thousand souls would adopt an address there.

On the north end of town, where the BIA Road intersects with Indian Route 6220, a large white water tower juts out of the desert. It overlooks a few dilapidated trailers on the very edge of the city, and then there is naught but a rocky mesa with scattered shrubs gamely trying to make a living in a few inches of sandy soil. I’d flown to the top of the tower as an owl, carrying a wee pair of binoculars in my talons, and now I was camouflaged in my human form, lying flat, and peering northeast into the barren waste where I was about to die.

The dying had to be done. The Morrigan had seen it in a lucid vision, and she doesn’t get those unless it’s really dire and inevitable, like James Earl Jones telling you in his Darth Vader voice, “It is your desss-­tiny.” And, frankly, I probably deserved it. I’d been very naughty recently and, in retrospect, epically stupid. Because I couldn’t bear to break my word, I’d taken Leif Helgarson to Asgard to kill Thor and he managed to pull it off, but we killed a few extra Æsir in the process and turned Odin into a drooling vegetable. Now the remaining Æsir were slavering for me to shuffle off my mortal coil, as were several other thunder gods who took Thor’s demise as a personal affront to all things thundery.

After building flaming funeral ships for their dead and resolving to avenge them—­for some people approach vengeance like an all-­you-­can-­eat buffet—­the Æsir sent Týr and Vidar after the surviving members of our company. I had no idea where Perun or Zhang Guo Lao were hiding, and I hadn’t an inkling of whether Hrym and the frost giants ever made it out of Asgard. Leif was safe, because they saw Thor smash his skull with Mjöllnir; thanks to the peculiar regeneration capabilities of vampires and the dutiful attentions of Dr. Snorri Jodursson, Leif hadn’t quite died, but it would be some time before we knew if he’d make a full recovery.

I, on the other hand, wasn’t safe at all, because I had people to look out for. Perun could spend the next century as an eagle and they’d never find him. Zhang Guo Lao, I’d heard, was capable of true invisibility when he stood still; since he could go full ninja, they’d never get him either. I could go to a nice plane somewhere and be safe—­I could even take Oberon and Granuaile with me—­but without true contact with the elementals of earth, Granuaile wouldn’t be able to advance her training as a Druid, and the world desperately needs more Druids. So my choices were to stay on earth and die or leave earth and let the world slowly die of neglect—­which wouldn’t truly help, since all planes connected to earth would die at the same time.

I decided to stay and die. Loudly.

Týr and Vidar found me quickly enough once they knew who to ask for. I’d blown my cover somewhat spectacularly some months earlier by killing Aenghus Óg, so by now almost anyone paranormal or supernatural could have pointed them to Arizona. They chased me up to Tuba City, towing along five thunder gods for backup: Ukko from Finland, Indra from India, Lei Gong from China, Raijin from Japan, and Shango from Nigeria. All of them are very powerful gods and quite beloved by their people, but few are the tales in which we hear of their wit or perception.

Indra was quite the character, for example, and undoubtedly the most powerful of the lot currently. He had a reputation for lovin’ the ladies, a tendency I couldn’t criticize myself, but he got himself into some awful trouble for it once. He chose to lay down with the wife of a magician, who of course found out immediately that Indra was “in da house” and assigned him a punishment worthy of Dante: Since the thunder god could think of nothing but vaginas, the cuckolded husband cursed Indra with a thousand vaginas all over his body. Indra had to walk around like that for a while, until Krishna took pity on him and commuted the sentence by turning all the vaginas into eyes. Still, think of the optometrist appointments.

The Morrigan observed, “They may be sharing the brain of a nuthatch between them.” She was perched on the water tower beside me in the shape of a battle crow, making sure that I “died” precisely as her vision foretold. We’d both been worried initially about her vision of my death—­she because it meant she’d break her oath to keep me alive, and I for obvious reasons—­until I remembered the Plan. I’d conceived the Plan before the Morrigan shared her vision with me but realized only later that the Plan could fulfill her vision of my death without me actually having to die for it. Now we watched with faint amusement as someone who looked like me cursed the circling thunder gods and asserted that they all were spawned from the puffy red asses of baboons. The gods sent bolt after bolt of lightning at him with no apparent effect as he stood in a puddle of mud.

“Give them a little credit, Morrigan,” I said. “They found me here, after all.”

“Only after you allowed them to by parading around this foolish copy of yourself. It still took them a week, but, very well: They are sharing the brains of two nuthatches.”

The Atticus O’Sullivan they assaulted was a near-­perfect replica. The tattoos on his right side were a precise copy of mine. The slightly curly mane of red hair would have shone luxuriantly in the sun had it not been pouring rain on him, and the goatee blazed with character on his chin. He was foulmouthed and had his Irish up, and he had my wallet and my cell phone in the pockets of his jeans. There was an iron amulet on a silver chain around his neck, with five square charms on either side of it and a fulgurite talisman in the back protecting him from the lightning. The fulgurite was real, but the amulet and charms were little more than costume jewelry. He did, however, carry Fragarach in his right hand—­the real Fragarach, not a facsimile—­for extra special verisimilitude.

Yet a clever enemy would not have been fooled. He didn’t have Oberon or Granuaile by his side, for one thing, and he wasn’t casting a single Druidic binding—­not that this bunch would know it if he did. They were still trying to fry him electrically.

“What are they thinking?” the Morrigan asked. “If the first hundred lightning bolts don’t work, the hundred-­ and-­first one will?”

“That strategy would require them to count,” I said, “which is improbable if they’re sharing two nuthatch brains.”

Týr, the Norse god of single combat, waved off the thunder gods to approach my double with a shield and an axe. Vidar, Odin’s son, armed with a long sword, followed close behind. The thunder gods floated down to the muddy earth behind the faux Atticus to cut off any escape. 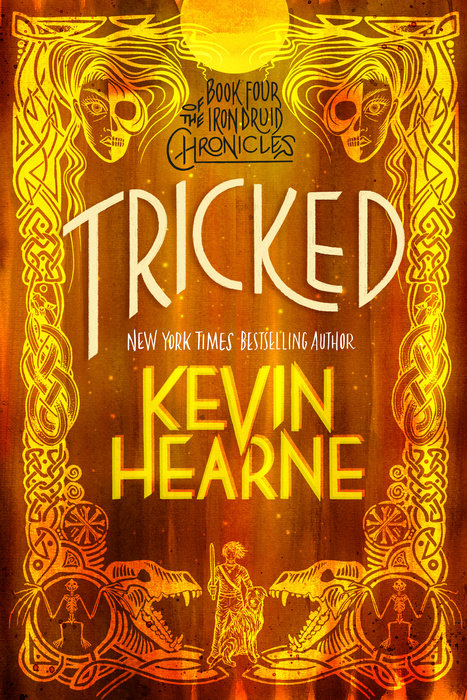