In the fifth novel in the New York Times bestselling Iron Druid Chronicles, two-thousand-year-old Druid Atticus O’Sullivan will at last bind a new Druid to protect the earth—but first he must go toe-to-toe with the Roman god Bacchus, the Norse pantheon, and an ancient vampire, all hell-bent on ensuring his demise.

The downside to faking your own death is that people tend to get upset when they find out they’ve been had. In Atticus O’Sullivan’s case, they’re upset enough to come after him to make sure he dies for real this time. Yet he can’t remain in hiding anymore: He has to bind his apprentice, Granuaile, to the earth so that she can become the first new Druid in centuries.

But the Roman god Bacchus wants mortal revenge for a slight against him, and he proceeds to act on the principle that Atticus should hate his life until it can be ended. Members of the Norse pantheon aren’t particularly pleased with Atticus either—especially one who had languished in darkness, slowly going mad, and is now free to work his mischief again.

On top of that, an ancient vampire, who’d like to remove Atticus and Granuaile as threats to his kind, is working on his own plan for their destruction.

Forced to work at the base of Mount Olympus, Atticus and Granuaile must survive the three-month process of her binding and escape the many traps set for them. It’s fortunate that they have Oberon the Irish Wolfhound on their side—but is one good dog going to be enough to see them through it?

An excerpt from Trapped

You know those spastic full-body twitches you get sometimes when you’re almost asleep and your muscles want to play a practical joke on your brain? You startle wide awake and immediately get pissed at your nervous system, wondering what the hell that was all about. I’ve caught myself talking to it before: “Damn it, Dude”—yes, I call my nervous system Dude, and the Dude abides—“I was almost asleep, and now you’ve slain all the sheep I was gonna count.”

What I felt as I walked on the Kaibab Plateau was kind of like that, except it was Gaia doing the spastic full-body twitch. It was more of an uncomfortable shudder that I felt through my tattoos, like when you step barefoot into the garage in winter and your nipples pucker up. But, as with those nervous muscle spasms, I got irritated about it and wondered what the hell was going on. And while I wasn’t about to go to sleep, I was about to enjoy the culmination of twelve years of training an apprentice—and, save for the first few months of it and a harrowing episode halfway through, I’d conducted it all in peace. Granuaile was finally ready to become a full Druid, and we’d been searching for a place to bind her to the earth when I felt the tremor. I shot a question to the elemental, Kaibab, in the cocktail of feelings and images they use instead of language: //Confusion / Query: What was that?//

//Confusion / Uncertainty / Fear// came the reply. That chilled me. I’d never heard confusion from an elemental before. The fear, on the other hand, was perfectly normal: Despite their awesome power, elementals are afraid of almost everything, from placer mines to land developers to bark beetles. They can be real scaredy-cats sometimes. But they’re never uncertain about what’s going on with Gaia. Stopping in my tracks and causing Granuaile and Oberon to turn and look at me quizzically, I asked Kaibab what there was to fear.

Well, that confused me too. Kaibab wasn’t talking about an airplane. He (or she, if Granuaile had been the one talking to the elemental) meant an entire plane of existence, a plane that was tied to earth somewhere on the other side of the globe. //Query: Which plane?//

The answer to that would tell me what plane was burning. There was a pause, during which time I stalled with Granuaile and Oberon. “Something’s up with Kaibab. Hold on.” They knew better than to interrupt, and they took this news as an invitation to be on their guard, which was wise. Anything worrisome to the avatar of the environment you currently occupy should rouse you to a caffeinated state of paranoia.

Almost unconsciously, I sent //Shock// in reply, because it was truly my reaction. The Slavic plane of existence was burning, perhaps even dead? How? Why? I hoped Perun would have the answers. If he sought me in hopes that I had them, we’d both be disappointed. //Yes / Tell Perun location//

I’d also like to know how Perun even knew to ask for me—did someone tell him I’d faked my death twelve years ago? There was another pause, during which I filled in Granuaile and Oberon. Thanks to Immortali-Tea, they hadn’t aged any more than I had.

Yep, that’s the one.

I don’t know why, but perhaps you’ll get a chance to ask him.

“Okay, incoming,” I said out loud.

“Incoming thunder god. We should move near a tree and get ready to shift away to Tír na nÓg if necessary. And get the fulgurites out.” Fulgurites would protect us from lightning strikes; Perun had given them to us when Granuaile was just starting her training, but we hadn’t worn them for years, since all the thunder gods thought I was dead.

“You think Perun is going to take a shot at us?” Granuaile asked. She shrugged off her red backpack and unzipped the pouch containing the fulgurites.

“I thought you always said, ‘When in doubt, blame the dark elves.’ ”

We stood in a meadow of bunch grass and clover. The sky washed us in cerulean blue, and the sun kissed Granuaile’s red hair with gold—mine too, I suppose. We had stopped dyeing our hair black because no one was looking for two redheads anymore. And after twelve uncomfortable years of being clean-shaven—my goatee had been distinguishable and damn difficult to dye—I was enjoying my new beard. Oberon looked as if he wanted to plop down and bask in the light for a while. Our backpacks were weighted down with camping gear that we’d bought at Peace Surplus in Flagstaff, but after Granuaile retrieved the fulgurites, we jogged over as best we could to the nearest stand of Ponderosa pine trees. I confirmed that there was a functioning tether to Tír na nÓg there and then looked up for signs of Perun’s arrival.

Granuaile noticed and craned her neck upward. “What’s up there, sensei?” she wondered aloud. “I don’t see anything but sky.”

“I’m looking for Perun. I’m assuming he’s going to fly in. There, see?” I pointed to a dark streak in the northwestern sky trailed by lightning bolts. And, behind that, at a distance of perhaps five to ten miles—I couldn’t tell from so far away—burned an orange ball of fire.

Granuaile squinted. “What’s that thing that looks like the Phoenix Suns logo? Is that him?”

“No, Perun is in front of it, throwing all the lightning.”

“Oh, so what is it? A meteor or a cherub or something?”

“Or something. It doesn’t look friendly. That’s not a warm, cozy hearth fire that you gather ’round with your friends to read some Longfellow while you toast s’mores. That’s more like napalm with a heart of phosphorus and a side of hell sauce.” The lightning and the fireball were turning in the sky and heading directly our way.

<Um. Hey, Atticus, think we should try that escape route just to make sure it works?> Oberon said.

I hear ya, buddy. I’m ready to scoot too. But let’s see if we can talk to Perun first.

The sky darkened and boomed above, making everything shudder; Perun was traveling at supersonic speeds. He crashed into the meadow about fifty yards away from us, and large chunks of turf exploded around a newly formed crater. I felt the impact in my feet, and a wave of displaced air knocked me backward a bit. Before the turf could fall back to earth, a heavily muscled figure carpeted in hair bounded out of it toward us, panic writ large on his features.

“Atticus! We must flee this plane! Is not safe! Take me—save me!”

Normally thunder gods are not prone to panic. The ability to blast away problems tends to turn the jagged edges of fear into silly little pillows of insouciance. So when an utter badass like Perun looks as if he’s about to soil himself, I hope I can be forgiven if I nearly shat kine—especially when the fireball whoomped into the crater Perun had just vacated and sucked all the oxygen out of my lungs.

Granuaile ducked and shrieked in surprise; Oberon whimpered. Perun was tossed through the air toward us like a stuntman in a Michael Bay film, but, upon rolling gracefully through the landing, he leapt back up, his legs churning toward us.

Behind Perun, the fire didn’t spread but rather began to shrink and coalesce and . . . laugh. A high, thin, maniacal laugh, straight out of creepy cartoons. And the fire swirled, torus-like, around a figure twelve feet tall, until it gradually wicked out and left a lean giant with a narrow face standing fifty yards before us, his orange and yellow hair starting from his skull like a sunburst. The grin on his face wasn’t the affable, friendly sort; it was more like the sociopathic rictus of the irretrievably, bugf**keringly insane.

His eyes were the worst. They were melted around the edges, as if they’d been burned with acid, and where a normal person would have laugh lines or crow’s-feet, he had bubbly pink scars and a nightmare of blistered tissue. The whites of his eyes were a red mist of broken blood vessels, but the irises were an ice blue frosted with madness. He blinked them savagely, as if he had soap in them or something, and soon I recognized it as a nervous tic, since his head jerked to the right at odd intervals and then continued to twitch uncertainly afterward, like a bobble-head doll.

“Go, my friend, go! We must flee!” Perun said, huffing as he reached us and putting one hand on my shoulder and another on the pine. Granuaile followed suit; she knew the drill, and so did Oberon, who reared up on his hind legs and leaned one paw against me and the other on the tree. 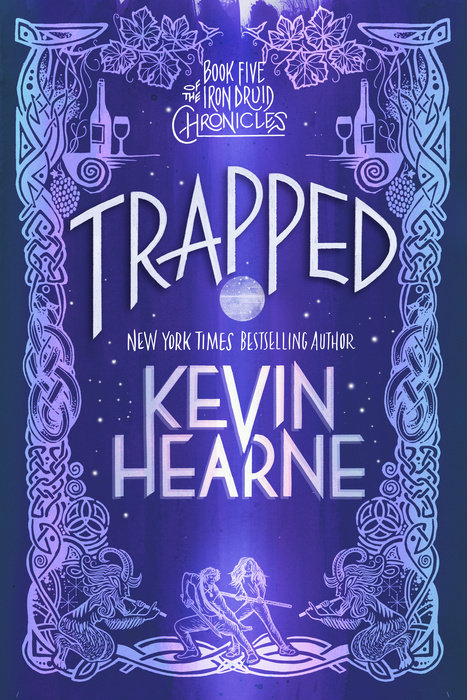