Go deep into SEAL Team SIX, straight to the heart of one of its most legendary operators.

When Navy SEAL Adam Brown woke up on March 17, 2010, he didn’t know he would die that night in the Hindu Kush Mountains of Afghanistan—but he was ready. In a letter to his children, not meant to be seen unless the worst happened, he wrote, “I’m not afraid of anything that might happen to me on this earth, because I know no matter what, nothing can take my spirit from me.”

Fearless is the story of a man of extremes, whose courage and determination were fueled by faith, family, and the love of a woman. It’s about a man who waged a war against his own worst impulses, including drug addiction, and persevered to reach the top tier of the U.S. military. In a deeply personal and absorbing chronicle, Fearless reveals a glimpse inside the SEAL Team SIX brotherhood, and presents an indelible portrait of a highly trained warrior whose final act of bravery led to the ultimate sacrifice.

Adam Brown was a devoted man who was an unlikely hero but a true warrior, described by all who knew him as…fearless.

“As a rule, we don’t endorse books or movies or anything regarding the command where I work—and Adam Brown worked—but as the author writes in Fearless, ‘you have to know the rules, so you know when to bend or break them.’ This is one of those times. Read this book. Period. It succeeds where all the others have failed.”
—SEAL Team SIX Operator

An excerpt from Fearless

Adam Brown’s civilian and military life has been recounted to me by his family, friends, and teammates—all eyewitnesses to each event portrayed in this book, including what Adam told them directly about his history and spiritual testimony. I also used official documents, statements, military records and reports, criminal records, family archives, letters, e-mails, and journal and diary entries. Some dates, locations, times, distances, and names (including those of some civilians) have been changed; faces in photographs obscured; and military tactics, techniques, and procedures altered in order to maintain operational security for the safety of the U.S. Navy SEALs
and those who work alongside them.

All information about the Naval Special Warfare Development Group, the SEALs, and individuals (including the use of real names) has already been published widely by the media and is deemed common knowledge. Nearly a dozen active-duty SEAL operators—including those in leadership roles—have unofficially, but no less meticulously, reviewed this manuscript for factuality and to point out any issues that might endanger lives in future operations. I have removed or rewritten sections to their approval, and in the few cases of discrepancy among the operators, I went with
the majority. Any vagueness in the manuscript is intentional, to protect these men and their allies.

All quotes, slang, inner thoughts, dialogue, and descriptions have been conveyed to me by those intimately involved in the story to the best of their ability and individual memories. Nothing has been contrived, dramatized, or fabricated.
What you are about to read is the account of an American hero who bravely gave permission in his final written requests to share his journey, from small-town America to the gutter to jail to Jesus to war to the top tier of the U.S. military: SEAL Team SIX.

Eric Blehm is the bestselling author of Fearless: The Undaunted Courage and Ultimate Sacrifice of Navy SEAL Team Six Operator Adam Brown  and The Only Thing Worth Dying For, which recounts the story of the first Special Forces A-team to infiltrate Taliban-held southern Afghanistan weeks after 9/11. Both titles were New York Times and Wall Street Journal bestsellers. His book The Last Season was the winner of the National Outdoor Book Award and was named by Outside magazine as one of the 10 “greatest adventure biographies ever written.” Blehm lives in southern California with his wife and children. 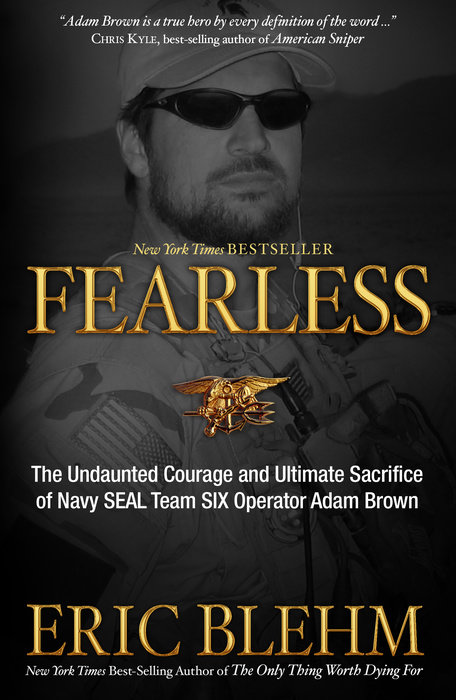