NEW YORK TIMES BESTSELLER • NAMED ONE OF THE BEST BOOKS OF THE YEAR BY NPR, BOOKPAGE, AND SHELF AWARENESS • “Paula McLain is considered the new star of historical fiction, and for good reason. Fans of The Paris Wife will be captivated by Circling the Sun, which . . . is both beautifully written and utterly engrossing.”—Ann Patchett, Country Living

This powerful novel transports readers to the breathtaking world of Out of Africa—1920s Kenya—and reveals the extraordinary adventures of Beryl Markham, a woman before her time. Brought to Kenya from England by pioneering parents dreaming of a new life on an African farm, Beryl is raised unconventionally, developing a fierce will and a love of all things wild. But after everything she knows and trusts dissolves, headstrong young Beryl is flung into a string of disastrous relationships, then becomes caught up in a passionate love triangle with the irresistible safari hunter Denys Finch Hatton and the writer Baroness Karen Blixen. Brave and audacious and contradictory, Beryl will risk everything to have Denys’s love, but it’s ultimately her own heart she must conquer to embrace her true calling and her destiny: to fly.

Praise for Circling the Sun

“In McLain’s confident hands, Beryl Markham crackles to life, and we readers truly understand what made a woman so far ahead of her time believe she had the power to soar.”—Jodi Picoult, author of Leaving Time

“Enchanting . . . a worthy heir to [Isak] Dinesen . . . Like Africa as it’s so gorgeously depicted here, this novel will never let you go.”—The Boston Globe

“Famed aviator Beryl Markham is a novelist’s dream. . . . [A] wonderful portrait of a complex woman who lived—defiantly—on her own terms.”—People (Book of the Week)

“Like its high-flying subject, Circling the Sun is audacious and glamorous and hard not to be drawn in by. Beryl Markham may have married more than once, but she was nobody’s wife.”—Entertainment Weekly

“[An] eloquent evocation of Beryl’s daring life.”—O: The Oprah Magazine

An excerpt from Circling the Sun

Before Kenya was Kenya, when it was millions of years old and yet still somehow new, the name belonged only to our most magnificent mountain. You could see it from our farm in Njoro, in the British East African Protectorate—hard edged at the far end of a stretching golden plain, its crown glazed with ice that never completely melted. Behind us, the Mau Forest was blue with strings of mist. Before us, the Rongai Valley sloped down and away, bordered on one side by the strange, high Menengai Crater, which the natives called the Mountain of God, and on the other by the distant Aberdare Range, rounded blue-grey hills that went smoky and purple at dusk before dissolving into the night sky.

When we first arrived, in 1904, the farm wasn’t anything but fifteen hundred acres of untouched bush and three weather-beaten huts.

“This?” my mother said, the air around her humming and shimmering as if it were alive. “You sold everything for this?”

“Other farmers are making a go of it in tougher places, Clara,” my father said.

“You’re not a farmer, Charles!” she spat before bursting into tears.

He was a horseman, in fact. What he knew was steeplechasing and foxhunting and the tame lanes and hedgerows of Rutland. But he’d seen paper flyers hawking cheap imperial land, and an idea had latched on to him that wouldn’t let go. We left Westfield House, where I was born, and travelled seven thousand miles, past Tunis and Tripoli and Suez, the waves like great grey mountains swallowing the sky. Then through Kilindini Harbour, in the port of Mombasa, which smelled of sharp spices and drying fish, and onto the snaking train bound for Nairobi, the windows boiling over with red dust. I stared at everything, completely thrilled in a way I hadn’t remembered feeling before. Whatever this place was, it was like nothing and nowhere else.

We settled in and worked to make our situation liveable, pushing against the wildness while the wildness pushed back with everything it had. Our land had no visible borders or fences, and our huts lacked proper doors. Silky, banded colobus monkeys climbed through the burlap sacking covering our windows. Plumbing was unheard of. When nature called, you walked out into the night with all the things that wanted to have at you and hung your derrière over a long-drop, whistling to keep your fear away.

Lady and Lord Delamere were our nearest white neighbours, a seven-mile hack through the bush. Their titles didn’t save them from sleeping in the typical mud-and-thatch rondavels. Lady D kept a loaded revolver under her pillow and advised my mother to do the same—but she wouldn’t. She didn’t want to shoot snakes or her dinner. She didn’t want to drag water for miles to have anything like a decent bath, or to live without company for months at a time. There was no society. There was no way to keep her hands clean. Life was simply too hard.

After two years, my mother booked a passage back to England. My older brother, Dickie, would go too, since he had always been frail and wouldn’t weather Africa for very much longer. I had yet to turn five when they climbed aboard the twice-weekly train to Nairobi with steamer trunks and handkerchiefs and travelling shoes.

The white feather in my mother’s helmet trembled as she kissed me, telling me I should keep my chin up. She knew I’d be fine, since I was such a big strong girl. As a treat, she would send a box of liquorice allsorts and pear drops from a shop in Piccadilly that I wouldn’t have to share with a soul.

I watched the train recede along the still black line of the track, not quite believing she would actually go. Even when the last shuddering car was swallowed up by distant yellow hills, and my father turned to me, ready to go back to the farm and his work; even then I thought the whole thing was a mistake, some terrible misunderstanding that would all get sorted at any moment. Mother and Dickie would disembark at the next station, or turn around at Nairobi and be back the next day. When that didn’t happen, I kept waiting all the same, listening for the far-off rumble of the train, one eye on the horizon, my heart on tiptoe.

For months there was no word from my mother, not even a dashed-off cable, and then the sweets arrived. The box was heavy and bore only my name—Beryl Clutterbuck—in my mother’s curlicued script. Even the shape of her handwriting, those familiar dips and loops, instantly had me in tears. I knew what the gift meant and couldn’t fool myself any more. Scooping the box into my arms, I made off to a hidden corner where, trembling, I ate up as many of the sugar-dusted things as I could stand before retching into a stable bucket.

Later, unable to drink the tea my father had made, I finally dared to say what I feared most.

“Mother and Dickie aren’t coming back, are they?”

“Perhaps she’s waiting for us to come to her.”

There was a long silence, and then he allowed that she might be. “This is our home now,” he said. “And I’m not ready to give up on it just yet. Are you?”

My father was offering a choice, but it wasn’t a simple one. His question wasn’t Will you stay here with me? That decision had been made months before. What he wanted to know was if I could love this life as he did. If I could give my heart to this place, even if she never returned and I had no mother going forward, perhaps not ever.

How could I begin to answer? All around us, half-empty cupboards reminded me of the things that used to be there but weren’t any longer—four china teacups with gold-painted rims, a card game, amber beads clicking together on a necklace my mother had loved. Her absence was still so loud and so heavy, I ached with it, feeling hollow and lost. I didn’t know how to forget my mother any more than my father knew how he might comfort me. He pulled me— long limbed and a little dirty, as I always seemed to be—onto his lap, and we sat like that quietly for a while. From the edge of the forest, a group of hyraxes echoed shrieks of alarm. One of our greyhounds cocked a sleek ear and then settled back into his comfortable sleep by the fire. Finally my father sighed. He scooped me under my arms, grazed my drying tears with a quick kiss, and set me on my own two feet.

Paula McLain is the New York Times bestselling author of the novels Love and Ruin, Circling the Sun, The Paris Wife, and A Ticket to Ride, the memoir Like Family: Growing Up in Other People’s Houses, and two collections of poetry. Her writing has appeared in The New York Times, Good Housekeeping, O: The Oprah Magazine, Town & Country, The Guardian, The Huffington Post, and elsewhere. She lives in Ohio with her family. 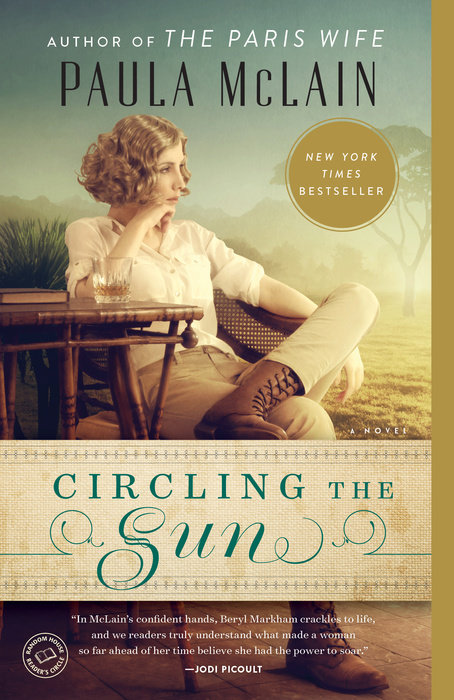