The Quest for a Moral Life

#1 NEW YORK TIMES BESTSELLER • Everybody tells you to live for a cause larger than yourself, but how exactly do you do it? The author of The Road to Character explores what it takes to lead a meaningful life in a self-centered world.

Every so often, you meet people who radiate joy—who seem to know why they were put on this earth, who glow with a kind of inner light. Life, for these people, has often followed what we might think of as a two-mountain shape. They get out of school, they start a career, and they begin climbing the mountain they thought they were meant to climb. Their goals on this first mountain are the ones our culture endorses: to be a success, to make your mark, to experience personal happiness. But when they get to the top of that mountain, something happens. They look around and find the view . . . unsatisfying. They realize: This wasn’t my mountain after all. There’s another, bigger mountain out there that is actually my mountain.

And so they embark on a new journey. On the second mountain, life moves from self-centered to other-centered. They want the things that are truly worth wanting, not the things other people tell them to want. They embrace a life of interdependence, not independence. They surrender to a life of commitment.

In The Second Mountain, David Brooks explores the four commitments that define a life of meaning and purpose: to a spouse and family, to a vocation, to a philosophy or faith, and to a community. Our personal fulfillment depends on how well we choose and execute these commitments. Brooks looks at a range of people who have lived joyous, committed lives, and who have embraced the necessity and beauty of dependence. He gathers their wisdom on how to choose a partner, how to pick a vocation, how to live out a philosophy, and how we can begin to integrate our commitments into one overriding purpose.

In short, this book is meant to help us all lead more meaningful lives. But it’s also a provocative social commentary. We live in a society, Brooks argues, that celebrates freedom, that tells us to be true to ourselves, at the expense of surrendering to a cause, rooting ourselves in a neighborhood, binding ourselves to others by social solidarity and love. We have taken individualism to the extreme—and in the process we have torn the social fabric in a thousand different ways. The path to repair is through making deeper commitments. In The Second Mountain, Brooks shows what can happen when we put commitment-making at the center of our lives.

An excerpt from The Second Mountain

Every once in a while, I meet a person who radiates joy. These are people who seem to glow with an inner light. They are kind, tranquil, delighted by small pleasures, and grateful for the large ones. These people are not perfect. They get exhausted and stressed. They make errors in judgment. But they live for others, and not for themselves. They’ve made unshakable commitments to family, a cause, a community, or a faith. They know why they were put on this earth and derive a deep satisfaction from doing what they have been called to do. Life isn’t easy for these people. They’ve taken on the burdens of others. But they have a serenity about them, a settled resolve. They are interested in you, make you feel cherished and known, and take delight in your good.

When you meet these people, you realize that joy is not just a feeling, it can be an outlook. There are temporary highs we all get after we win some victory, and then there is also this other kind of permanent joy that animates people who are not obsessed with themselves but have given themselves away.

I often find that their life has what I think of as a two-mountain shape. They got out of school, began their career or started a family, and identified the mountain they thought they were meant to climb: I’m going to be a cop, a doctor, an entrepreneur, what have you. On the first mountain, we all have to perform certain life tasks: establish an identity, separate from our parents, cultivate our talents, build a secure ego, and try to make a mark in the world. People climbing that first mountain spend a lot of time thinking about reputation management. They are always keeping score. How do I measure up? Where do I rank? As the psychologist James Hollis puts it, at that stage we have a tendency to think, I am what the world says I am.

The goals on that first mountain are the normal goals that our culture endorses—to be a success, to be well thought of, to get invited into the right social circles, and to experience personal happiness. It’s all the normal stuff: nice home, nice family, nice vacations, good food, good friends, and so on.

Some people get to the top of that first mountain, taste success, and find it . . . unsatisfying. “Is this all there is?” they wonder. They sense there must be a deeper journey they can take.

Other people get knocked off that mountain by some failure. Something happens to their career, their family, or their reputation. Suddenly life doesn’t look like a steady ascent up the mountain of success; it has a different and more disappointing shape.

For still others, something unexpected happens that knocks them crossways: the death of a child, a cancer scare, a struggle with addiction, some life-altering tragedy that was not part of the original plan. Whatever the cause, these people are no longer on the mountain. They are down in the valley of bewilderment or suffering. This can happen at any age, by the way, from eight to eighty-five and beyond. It’s never too early or too late to get knocked off your first mountain.

These seasons of suffering have a way of exposing the deepest parts of ourselves and reminding us that we’re not the people we thought we were. People in the valley have been broken open. They have been reminded that they are not just the parts of themselves that they put on display. There is another layer to them they have been neglecting, a substrate where the dark wounds, and most powerful yearnings live.

Some shrivel in the face of this kind of suffering. They seem to get more afraid and more resentful. They shrink away from their inner depths in fear. Their lives become smaller and lonelier. We all know old people who nurse eternal grievances. They don’t get the respect they deserve. They live their lives as an endless tantrum about some wrong done to them long ago.

But for others, this valley is the making of them. The season of suffering interrupts the superficial flow of everyday life. They see deeper into themselves and realize that down in the substrate, flowing from all the tender places, there is a fundamental ability to care, a yearning to transcend the self and care for others. And when they have encountered this yearning, they are ready to become a whole person. They see familiar things with new eyes. They are finally able to love their neighbor as themselves, not as a slogan but a practical reality. Their life is defined by how they react to their moment of greatest adversity.

The people who are made larger by suffering go on to stage two small rebellions. First, they rebel against their ego ideal. When they were on their first mountain, their ego had some vision of what it was shooting for—some vision of prominence, pleasure, and success. Down in the valley they lose interest in their ego ideal. Of course afterward they still feel and sometimes succumb to their selfish desires. But, overall, they realize the desires of the ego are never going to satisfy the deep regions they have discovered in themselves. They realize, as Henri Nouwen put it, that they are much better than their ego ideal.

The people who have been made larger by suffering are brave enough to let parts of their old self die. Down in the valley, their motivations changed. They’ve gone from self-centered to other-centered.

Some people radically alter their lives when this happens. They give up their law practices and move to Tibet. They quit their jobs as consultants and become teachers in inner-city schools. Others stay in their basic fields but spend their time differently. I have a friend who built a successful business in the Central Valley of California. She still has her business but spends most of her time building preschools and health centers for the people who work in her company. She is on her second mountain.

Still others stay in their same jobs and their same marriages, but are transformed. It’s not about self anymore; it’s about a summons. If they are principals, their joy is in seeing their teachers shine. If they work in a company, they no longer see themselves as managers but as mentors; their energies are devoted to helping others get better. They want their organizations to be thick places, where people find purpose, and not thin places, where people come just to draw a salary.

In their book Practical Wisdom, psychologist Barry Schwartz and political scientist Kenneth Sharpe tell a story about a hospital janitor named Luke. In the hospital where Luke worked, there was a young man who’d gotten into a fight and was now in a coma, and he wasn’t coming out. Every day, his father sat by his side in silent vigil, and had done so for six months. One day, Luke came in and cleaned the young man’s room. His father wasn’t there; he was out getting a smoke. Later that day, Luke ran into the father in the hallway. The father snapped at Luke and accused him of not cleaning his son’s room.

The first-mountain response is to see your job as cleaning rooms. “I did clean your son’s room,” you would snap back. “It was just that you were out smoking.” The second-mountain response is to see your job as serving patients and their families. It is to meet their needs at a time of crisis. That response says, This man needs comfort. Clean the room again.

And that’s what Luke did. As he told an interviewer later, “I cleaned it so that he could see me cleaning it. . . . I can understand how he could be. It was like six months that his son was there. He’d been a little frustrated, and I cleaned it again. But I wasn’t angry with him. I guess I could understand.”

David Brooks is one of the nation’s leading writers and commentators. He is an op-ed columnist for The New York Times and appears regularly on PBS NewsHour and Meet the Press. He is the bestselling author of The Road to Character; The Social Animal: The Hidden Sources of Love, Character, and Achievement; Bobos in Paradise: The New Upper Class and How They Got There; and On Paradise Drive: How We Live Now (And Always Have) in the Future Tense.

The Quest for a Moral Life 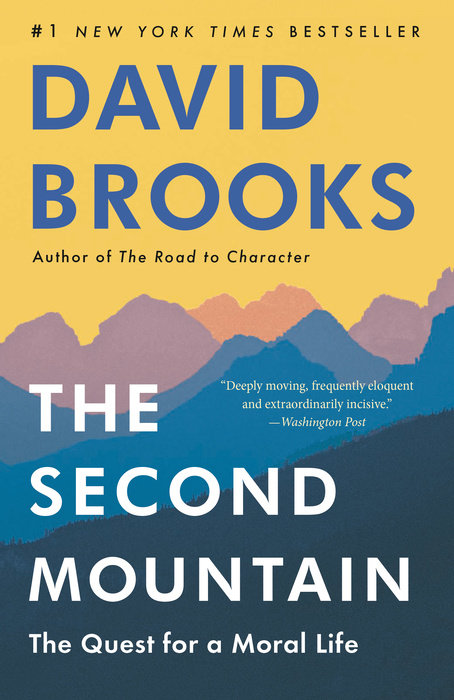