When Norm Macdonald, one of the greatest stand-up comics of all time, was approached to write a celebrity memoir, he flatly refused, calling the genre “one step below instruction manuals.” Norm then promptly took a two-year hiatus from stand-up comedy to live on a farm in northern Canada. When he emerged he had under his arm a manuscript, a genre-smashing book about comedy, tragedy, love, loss, war, and redemption. When asked if this was the celebrity memoir, Norm replied, “Call it anything you damn like.”

An excerpt from Based on a True Story

“Lorne will see you now.”

He was always Lorne, never Mr. Michaels. He was smart that way. I took a seat across the desk from him, and there was a container of pencils that had been sharpened that very day and a bowl of fresh popcorn and plenty of Coca-­Cola.

“Swell office you got here, Lorne.”

“Thank you, Norm. I understand you’re from Canada?”

“Yes, sir,” I said, and I knew that even though we hailed from the same nation, we were worlds apart. He was a cosmopolite from Toronto, worldly, the kinda guy who’d be comfortable around the Queen of England herself. Me, I was a hick, born to the barren, rocky soil of the Ottawa Valley, where the richest man in town was the barber. Lorne was a bigshot and I was a smallfry, and that’s why I was planning on doing very little talking in this job interview.

First let me say that Lorne is often portrayed as an intimidating man, and he is. In some ways he can’t help it. He is quietly confident, smart, funny, and he always carries a dagger. These four qualities combine to make for an intimidating man.

He had beautiful assistants that the writers had derisively nicknamed “the Lornettes.” These girls secretly loved Lorne and also openly loved him. In another room, the writers sat around and did impressions of Lorne that didn’t sound anything like him. This is the way it is with all bigshots and all smallfrys everywhere, and it’s been like that since the get-go. The boss is always a big joke, just dumb and lucky, and nobody’s afraid of him at all and everybody has a good laugh at him. Until he walks into the room, that is. It’s a different story then.

Lorne began the interview by telling stories, and I just listened and nodded and laughed when I was supposed to, the same way I did in every job interview I’d ever had. But this guy was different. First thing I noticed was that he was funny, really genuinely funny, and that is very rare for a bigshot. Especially a bigshot in comedy.

He had all these firsthand stories he was telling me about back in the day when he worked on shows in Toronto and then in Hollywood. And he smiled when he told the stories, the kind of smile a man gets when memory transports him to another place and another time. He had worked on The Smothers Brothers Comedy Hour and a few Lily Tomlin specials. And there were famous celebrities in his stories, and all the stories were funny. And pretty soon my pretend laugh was turning into an honest-­to-­God real laugh, and I was choking on popcorn and coughing Coca-­Cola.

We were having a grand old time until suddenly Lorne got down to business. “So, Norm, let me tell you how the audition process works. We go down to the studio and you show us two characters.”

I hadn’t expected this. I’d been told this meeting was a mere formality, that as long as I didn’t insult Lorne outright, the job was mine.

“Well, you see, Lorne, the thing is this. I’m a nightclub comic. Jokes, crowd work, that kinda thing. But I’m a hard worker and I catch on really fast. Besides, I understand I’ve been vouched for.” And I had been too. By Jim Downey, the head writer and second-­in-­command. By David Spade, the comic actor. Why, even by Adam Sandler himself!

“Yes, I’ve heard good things. But the thing is, you’re a stand-up comedian. We are a variety show and I have to be sure you will be able to provide versatility. I don’t want to waste your time or mine.” I wasn’t sure he cared about wasting my time, since I’d been left in his waiting room for four hours, waiting and waiting. And waiting.

“Tell me another story about Lily Tomlin, Lorne,” I blurted out. I figured if he could tell me another funny story, I could start laughing again, and we could go back to those great times we were having a few moments ago. But no dice.

Then he unsmiled his lips and got real plural on me. “We’ll let you know,” he said, and he looked down at a blank piece of paper on his desk. Well, you’d think he was a generous milliner and I was the tallest man in the whole wide world, the way he gave me the high hat that day.

I staggered to my feet, sweating hard, and chugged down the last of the Coca-­Cola as Lorne meticulously studied that blank piece of paper the way I’d imagine a sculptor might study a mountain of rock. I had to think and think fast. But that’s not easy for me. I think slow. Real slow.

I felt like I was back in first grade and I’d just failed, as I always did. But that made me think of something else. You see, a lot of times, when I hadn’t finished my homework, I would bring the teacher a shiny red apple and present it to her. It would always work, of course. What would a teacher rather do, read scribbled nonsense from a five-­year-­old or eat a shiny red apple?

But I wasn’t dealing with a first-­grade teacher here. This was the legendary Lorne Michaels, and he wasn’t known for changing his mind once it was made up. Was there a chance I could redapple the old man? I didn’t know. But I did know I was lucky enough that day to have a shiny red apple in my back pocket.

“Listen, Lorne, I do have one character I’ve been working on, and I think it’ll be a big hit. The biggest. But I don’t want to do it down in the studio, where some bum might steal it and take it for his own. I want to do it just for you, right here and now.”

Lorne looked up at me with that stare of his that passeth all human understanding. “Go ahead, Norm.”

I reached inside my back pocket and pulled out a bag containing seven grams of government-grade morphine and two brand-new syrettes and tossed them on his desk.

“I call this character ‘The Connection.’ ”

“Norm, I confess that your antics are near amusing, but this is not what we at the show refer to as a ‘character.’ Do you know what we call this at the show, Norm?”

Norm Macdonald was a stand-up comedian, writer, and actor. He died in September 2021. 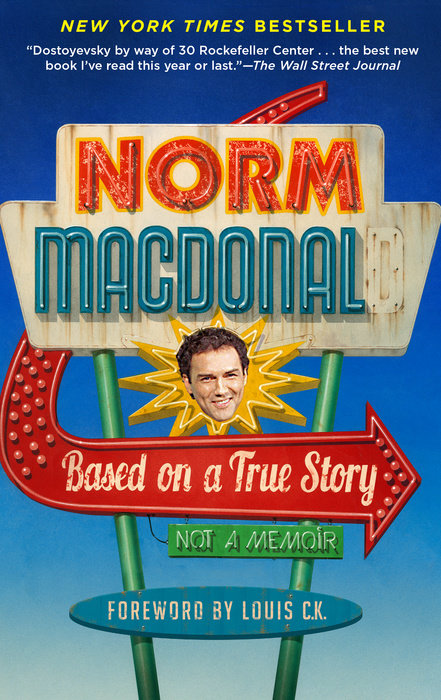