A boy coming of age in a part of the country that’s being left behind is at the heart of this dazzling novel—the first by an award-winning author of short stories that evoke the American West.

Callan Wink has been compared to masters like Jim Harrison and Thomas McGuane. His short stories have been published in The New Yorker and have won numerous accolades. Now his enormous talents are showcased in a debut novel that follows a boy growing up in the middle of the country through those difficult years between childhood and adulthood.

August is an average twelve-year-old. He likes dogs and fishing and doesn’t mind early-morning chores on his family’s Michigan dairy farm. But following his parents’ messy divorce, his mother decides that she and August need to start over in a new town. There, he tries to be an average teen—playing football and doing homework—but when his role in a shocking act of violence throws him off course once more, he flees to a ranch in rural Montana, where he learns that even the smallest communities have dark secrets.

Covering August's adolescence, from age twelve to nineteen, this gorgeously written novel bears witness to the joys and traumas that irrevocably shape us all. Filled with unforgettable characters and stunning natural landscapes, this book is a moving and provocative look at growing up in the American heartland.

An excerpt from August

August’s first, fully accessible memory was of the barn. Riding on his father’s shoulders down the hill behind the house, he could see the building ahead of them, its peaked roof and the long, low addition off to the side, faded red with white trim. His father ducking under the door so he wouldn’t hit his head, the dull murmur of the milk pump, the cows chewing in the stanchions. Maybe five or six, he was too old to be riding on his father’s shoulders, and he didn’t want to be there. As soon as he could, he squirmed down and climbed to the haymow. The rungs of the ladder were almost too far spaced, but his father was there at his back in case he slipped.

In the haymow, dusty and dark and warm, his father broke up two bales to make a soft pile, and they had several wrestling matches during which August got repeatedly tossed into the loose hay, a situation he loved more than just about anything. After a time they descended the ladder, and August’s father removed and sanitized the milkers while August went around patting each Holstein on the nose. When the milking was done, August helped his father dip the teats of several cows until August dropped the applicator and spilled the iodine solution and his father sat him in the milk room with a mason jar filled fresh from the refrigerator vat to keep him occupied while he finished the chores alone. The milk was full-fat, thick and heavy, cold enough to fog the glass. There was the smell of the cows and straw. The milk room was whitewashed, cobwebs in the old wooden crossbeams, the stainless vat spotless and gleaming. He held the mason jar with both hands, drinking, the milk running down his chin.

Eventually his father came and scooped him up. The cows had been put out to pasture, and the barn was silent. He rode on his father’s shoulders back to the house, tired and not protesting now. His mother was at the kitchen table, a dim gray haze of smoke above her head. She had books scattered around her, glasses on, taking notes. He crawled up on her lap and she wrinkled her nose, removing some papers from under one of his grubby hands. The sound of the TV being switched on came from the other room, his father opening a beer.

She closed her books and put them into her backpack. “Looks like study hall is over,” she said. “Thanks, Dad. Let’s get you to the bath.”

“Get rid of the damn things,” August’s father said. “The haymow smells like piss. Take a tire iron or a shovel or whatever tool suits you. You’ve been after me for school money? I’ll give you a dollar a tail. You have your jackknife? You have it sharp? You take their tails and pound them to a board, and then after a few days we’ll have a settling up. Small tails worth as much as large tails, it’s all the same.”

The cats—calicos, tabbies, dirty white, gray, jet black, and tawny—sat among the hay bales scratching and yawning like indolent apes inhabiting the remains of a ruined temple. August had never actually killed a cat before but, like most farm boys, he had engaged in plenty of casual acts of torture. Cats, as a species, retained a feral edge, and as a result were not subject to the rules of husbandry that governed man’s relation with horses or cows or dogs. August figured that somewhere along the line cats had struck a bargain—they knew they could expect to feel a man’s boot if they came too close; in return, they kept their freedom and nothing much was expected of them.

A dollar a tail. August thought of the severed appendages, pressed and dried, stacking up like currency in the teller drawer of some alien bank. Fifty dollars at least, maybe seventy-five, possibly even a hundred if he was able to track down the newborn litters.

He went to the equipment shed to look for weapons. It was a massive structure, made of metal posts skinned with corrugated sheet metal, large enough to fit a full-sized diesel combine. August liked to go there when it rained. It was like being a small creature deep in the bowels of a percussion instrument. The fat drops of rain would hit the thin metal skin in an infinite drumroll, punctuated by the clash of lightning cymbals and the hollow booming of space.

In the shed there was a long workbench covered in the tangled intestines of machinery: looping coils of compressor hoses, hydraulic arms leaking viscous fluid, batteries squat and heavy, baling twine like ligaments stitching the whole crazy mess together, tongue-and-ball trailer knobs, mason jars of rusting bolts and nuts and screws, a medieval-looking welder’s mask, and, interspersed among the other wreckage like crumpled birds, soiled leather gloves in varying degrees of decomposition. August picked up a short length of rusted, heavy-linked logging chain and swung it a few times experimentally before discarding it. He put on a pair of too-large gloves and hefted a broadsword-sized mower blade, slicing slow patterns in the air, before discarding it, too. Then he uncovered a three-foot-long breaker bar wrench with a slim stainless-steel handle that swelled at the other end into a glistening and deadly crescent head. He brought the head down into his glove several times to hear the satisfying whack. He practiced a few death-dealing swing techniques—the sidearm golf follow-through; the overhead back-crushing ax chop; the short, quick line-drive baseball checked swing—the wrench head making ragged divots in the hard-packed dirt floor. He worked up a light sweat and then shouldered his weapon, put the pair of gloves in his back pocket, and went to see his mother.

The old house was set back against a low, rock-plated hill. A year-round spring wept from the face of the rock, and the dampness of it filled the house with the smell of wet leaves and impending rain. The house was a single-level ranch that August’s mother’s grandparents had built with their own hands and lived in until they died. The old house looked up at the new house, the one August’s father had finished the year after August was born. The new house was a tall Victorian with white shutters and a full wraparound porch. August’s mother’s parents had both died when he was young, and he had no memories of them. After their passing his father convinced his mother to sell the vacation home on Torch Lake. With the money he built the new house and bought eighty head of Holstein-Friesians.

“He feels like it’s his own,” August’s mother had said to him once, smoking in the kitchen of the new house. “His people didn’t have much. Everything we got came from my side, you know. He would never admit it in a hundred years, but it bothers him.” She coughed. “It’s too big. That was my complaint from the get-go. It’s hard to heat, too, exposed up on the hill like this; the wind gets in everywhere. My father or grandfather would have never done it like that. They built smart houses for their families, but that’s the type of men they were.”

August tapped the door a few times with the wrench and went inside. The old house was built by folks interested in efficiency, not landscape, and its windows were few and small. The kitchen was dimly lit by a single shaft of light coming through the window over the sink. The room smelled like frying bacon, and the radio was on. Paul Harvey was extolling the virtues of a Select Comfort Sleep Number Bed. At my age there are few things I appreciate more than a night of restful sleep. Get this mattress. It was dreamed up by a team of scientists.

“Augie, my fair son, how does the day find you?”

His mother was at the kitchen table playing solitaire. A pan of thinly sliced potatoes fried with pieces of bacon and onion sat next to her ashtray. She smoked Swisher Sweet cigarillos, and a thin layer of smoke undulated above her head like a smooth gray flying carpet. He’d noticed that she seemed to tune in to Paul Harvey in order to make fun of him, while his father tended to listen to Paul Harvey just to listen.

Callan Wink was born in Michigan in 1984. He lives in Livingston, Montana, where he is a fly-fishing guide on the Yellowstone River. He is the recipient of an NEA Creative Writing Fellowship and a Stegner Fellowship at Stanford University. His work has been published in The New Yorker, Granta, Men’s Journal, and The Best American Short Stories. 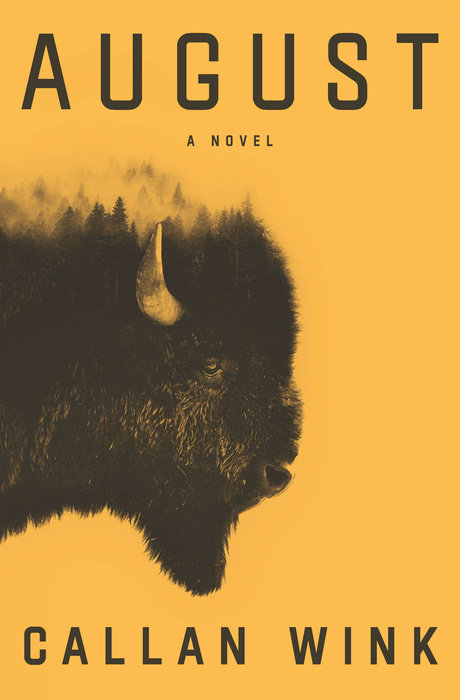