Includes a new afterword by the author • “Slaughter’s gift for illuminating large issues through everyday human stories is what makes this book so necessary for anyone who wants to be both a leader at work and a fully engaged parent at home.”—Arianna Huffington

NAMED ONE OF THE BEST BOOKS OF THE YEAR BY THE WASHINGTON POST, NPR, AND THE ECONOMIST

When Anne-Marie Slaughter accepted her dream job as the first female director of policy planning at the U.S. State Department in 2009, she was confident she could juggle the demands of her position in Washington, D.C., with the responsibilities of her family life in suburban New Jersey. Her husband and two young sons encouraged her to pursue the job; she had a tremendously supportive boss, Secretary of State Hillary Clinton; and she had been moving up on a high-profile career track since law school. But then life intervened. Parenting needs caused her to make a decision to leave the State Department and return to an academic career that gave her more time for her family.

The reactions to her choice to leave Washington because of her kids led her to question the feminist narrative she grew up with. Her subsequent article for The Atlantic, “Why Women Still Can’t Have It All,” created a firestorm, sparked intense national debate, and became one of the most-read pieces in the magazine’s history.

Since that time, Anne-Marie Slaughter has pushed forward, breaking free of her long-standing assumptions about work, life, and family. Though many solutions have been proposed for how women can continue to break the glass ceiling or rise above the “motherhood penalty,” women at the top and the bottom of the income scale are further and further apart.

Now, in her refreshing and forthright voice, Anne-Marie Slaughter returns with her vision for what true equality between men and women really means, and how we can get there. She uncovers the missing piece of the puzzle, presenting a new focus that can reunite the women’s movement and provide a common banner under which both men and women can advance and thrive.

With moving personal stories, individual action plans, and a broad outline for change, Anne-Marie Slaughter reveals a future in which all of us can finally finish the business of equality for women and men, work and family.

“I’m confident that you will be left with Anne-Marie’s hope and optimism that we can change our points of view and policies so that both men and women can fully participate in their families and use their full talents on the job.”—Hillary Rodham Clinton

An excerpt from Unfinished Business

Less Can Be More

During the 2014 Super Bowl, Cadillac ran an ad that was meant to be a celebration of American workaholism. It showed a clean- cut fifty-something white man with blazing blue eyes walking and talking his way through his mansion while extolling the virtues of the American work ethic. “Other countries, they work, they stroll home, they stop by the café, they take August off. Off. Why aren’t you  like that?  Why  aren’t  we like that?  Because we’re crazy, driven, hardworking believers,” says the guy, who looks like a car- toon version of a one-percenter, to the camera. The moral of the ad: If you just work hard enough, avoiding vacation and “creating your own luck,” anything, including the ownership of a $75,000 car, is possible.

The  ad drove me crazy. The  man was so smug and so com- pletely out of touch with what I consider to be the real values that Americans have traditionally  proclaimed and tried to pass down to their children. Yes, Europeans and others often criticize Amer- ican culture for being materialistic, but when Thomas  Jefferson described humankind’s “unalienable rights” in the Declaration  of Independence, he took English Enlightenment philosopher  John Locke’s “life, liberty, and estate” and substituted “life, liberty, and the pursuit of happiness.” And as the behavioral psychologists tell us, happiness is more likely to be found in the pleasures of human connection  and experience—a good meal, a play or movie or sporting event, a bouquet of flowers or a bottle of champagne— than it is in an endless catalogue of possessions.

I wasn’t alone in my reaction. One reporter wrote, “You know what really needs attention?  What working like crazy and taking no time off really gets us[?]” It gets Americans to the grave earlier, it’s made us more anxious than people in other developed coun- tries, and it’s created  a group  of people more  disengaged from their jobs than in countries with more leisure time.
In the end, it was New Yorker writer Jeffrey Toobin who made the most damning argument  against the commercial. As we were talking about it, he pointed out that Cadillac was disparaging the vacation-loving Europeans  in an effort to sell luxury cars to a wealthy U.S. audience who prefer German BMWs and Mercedes. Last  I  checked,  German   workers  get  a  mandated   minimum twenty days of vacation every year.
It’s that simple. German  workers work at least two weeks a year less than American workers do and yet produce better  cars. Perhaps  that is because German  managers still subscribe to the empirical findings that led Henry Ford to establish an eight-hour workday in 1914. When Ford looked at in-house research, he realized that manual laborers were finished after eight hours of work a day. After he cut hours, errors went down, and productiv- ity, employee satisfaction, and company profits went up.

We actually have a growing body of data in support  of the proposition that working less means working better. According to much  more  recent  research,  people  who work principally  with their brains rather than their hands have an even shorter amount of real daily productivity than manual laborers. Microsoft em- ployees, for instance, reported  that they put in only twenty-eight productive hours in a forty-five-hour workweek—a little less than six hours  a day. Futurist  Sara Robinson  found the same thing: knowledge  workers have fewer than  eight hours  a day of hard mental labor in them before they start making mistakes.

This relationship between working better and working less holds particularly true in any job requiring creativity, the well- spring of innovation. Experts on creativity emphasize the value of nonlinear  thinking  and cultivated randomness,  from long walks to looking at your environment in ways you never have before. Making time for play, as well as designated  downtime,  has also been found to boost creativity. Experts suggest we should change the rhythm  of our workdays to include periods in which we are simply letting our minds run wherever they want to go. Without play, we might never be able to make the unexpected connections that are the essence of insight.

Anne-Marie Slaughter is president and CEO of New America. She is the Bert G. Kerstetter ’66 University Professor Emerita of Politics and International Affairs at Princeton University and the former dean of its Woodrow Wilson School of Public and International Affairs. In 2009 Secretary of State Hillary Clinton appointed Slaughter director of policy planning for the U.S. State Department, the first woman to hold that job. A foreign policy analyst, legal and international relations scholar, and public commentator, Slaughter was a professor at the University of Chicago Law School and Harvard Law School and is a former president of the American Society of International Law. 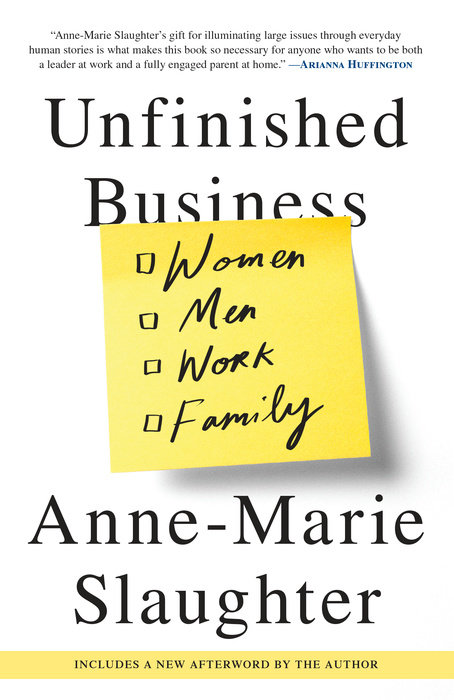