A thriller of war that never was—of survival in an impossible city—of surreal cataclysm. In The Last Days of New Paris, China Miéville entwines true historical events and people with his daring, uniquely imaginative brand of fiction, reconfiguring history and art into something new.

1941. In the chaos of wartime Marseille, American engineer—and occult disciple—Jack Parsons stumbles onto a clandestine anti-Nazi group, including Surrealist theorist André Breton. In the strange games of the dissident diplomats, exiled revolutionaries, and avant-garde artists, Parsons finds and channels hope. But what he unwittingly unleashes is the power of dreams and nightmares, changing the war and the world forever.

1950. A lone Surrealist fighter, Thibaut, walks a new, hallucinogenic Paris, where Nazis and the Resistance are trapped in unending conflict, and the streets are stalked by living images and texts—and by the forces of Hell. To escape the city, he must join forces with Sam, an American photographer intent on recording the ruins, and make common cause with a powerful, enigmatic figure of chance and rebellion: the exquisite corpse.

But Sam is being hunted. And new secrets will emerge that will test all their loyalties—to each other, to Paris old and new, and to reality itself.

Praise for The Last Days of New Paris

“Beautiful, stunningly realized . . . [The Last Days of New Paris] is a brief vacation in alien latitudes, a midnight layover in an imaginary place.”—NPR

“A thoughtful, highbrow novella . . . Miéville’s self-assured style offers up a strong sense of humanity, while the strange Surrealist monsters give Last Days a fun and complementary mad-science component.”—USA Today

“[A] testament to the necessary, progressive power of art . . . Both moving and disturbingly timely.”—Newsday

“A novel both unhinged and utterly compelling, a kind of guerrilla warfare waged by art itself, combining both meticulous historical research and Miéville’s unparalleled inventiveness.”—Chicago Tribune

An excerpt from The Last Days of New Paris

A street in lamplight. Beyond a wall of ripped-­up city, the Nazis were shooting.

Past the barricade and a line of tailors’ mannequins assembled in a crude and motionless cancan, Thibaut could see the khaki of scattering Wehrmacht men, gray dress uniforms, SS black, the blue of the Kriegsmarine, all lit up by the flares of weapons. Something sped along the rue de Paradis, weaving in a howl of rubber between bodies and ruins, coming straight at the Germans.

Two women on a tandem? They came very fast on big wheels.

The soldiers shot, reloaded, and ran because the rushing vehicle did not turn or fall under their onslaught. There was a whir of chains.

Only one woman rode, Thibaut made out. The other was a torso, jutted from the bicycle itself, its moving prow, a figurehead where handlebars should be. She was extruded from the metal. She pushed her arms backward and they curled at the ends like coral. She stretched her neck and widened her eyes.

Thibaut swallowed and tried to speak, and tried again, and screamed, “It’s the Vélo!”

At once his comrades came. They pressed against the big window and stared down into the city gloom.

The Amateur of Velocipedes. Lurching through Paris on her thick-­spoked wheels singing a song without words. My God, Thibaut thought, because a woman was riding her, and that absolutely should not happen. But there she was, gripping the Vélo’s wrist with one hand, pulling with the other on leather strapped tight around the cycle-­centaur’s throat.

The Vélo moved faster than any car or horse, any devil Thibaut had yet seen, swaying between the façades, dodging bullets. She tore through the last of the men and the line of figurines they’d arranged. She raised her front wheel and hit the barricade, mounted the meters of plaster, stone, bone, wood, and mortar that blocked the street.

She rose. She hurled into the air above the soldiers, arced up, seeming to pause, falling at last through the invisible boundary between the ninth and tenth arrondissements. She landed hard on the Surrealist side of the street.

The Vélo bounced and twisted on her tires, slid sideways. She came to a stop, looking up at the window of the Main à plume’s hideout, straight into Thibaut’s eyes.

He was first out of the room and down the splintering steps, almost falling from the doorway out into the darkening street. His heart shook him.

The passenger was sprawled on the cobbles where her mount had bucked. The Vélo reared above her on her hind wheel like a fighting horse. She swayed.

She looked at Thibaut with pupil-­less eyes the same color as her skin. The manif flexed her thick arms and reached up to snap the cord around her neck and let it fall. She rocked in the wind.

Thibaut’s rifle dangled in his hands. At the edge of his vision he saw Élise lob a grenade over the barricade, in case the Germans were regrouping. The explosion made the ground and the barrier tremble, but Thibaut did not move.

The Vélo tipped forward, back onto both wheels. She accelerated toward him but he made himself stay still. She bore down and her wheels were a burr. Adrenaline took him with the certainty of impact, until on a final instant too quick to see she tilted and passed instead so close to him that Thibaut’s clothes were tugged in the rush of her air.

Tires singing, the cycle-­presence wove between the shattered buildings of the Cité de Trévise, into ruins and shadows, out of sight.

Thibaut at last exhaled. When he could control his shaking, he turned to the passenger. He went to where she lay.

The woman was dying. She had been hammered by the German fire the Vélo had ignored. Some fleeting influence at that powerful intersection of streets meant all the holes in her flesh were dry and puckered, but blood spilled from her mouth as if insisting on one outlet. She coughed and tried to speak.

“Did you see?” Élise was shouting. Thibaut knelt and put his hand on the fallen woman’s forehead. The partisans gathered. “She was riding the Vélo!” Élise said. “What does that mean? How in hell did she control it?”

The passenger’s dark dress was dirty and ripped. Her scarf spread out on the road and framed her face. She furrowed her brow as if thoughtful. As if considering a problem. She was not much older than Thibaut, he thought. She looked at him with urgent eyes.

Cédric stepped forward and tried to murmur prayers and Virginie shoved him sharply away.

The dying woman took Thibaut’s hand. “Here,” she whispered. “He came. Wolf. Gang.” She gasped out little bursts. Thibaut put his ear close to her mouth. “Gerhard,” she said. “The doctor. The priest.”

She was not looking at him any more, Thibaut realized, but past him, behind him. His skin itched in Paris’s attention. He turned.

Behind the windows of the nearest building, overlooking them, a slowly shifting universe of fetal globs and scratches unfolded. A morass of dark colors, vivid on a blacker dark. The shapes rattled. They tapped the glass. A manif storm had come from within the house to witness this woman’s death.

As everyone gathered watched the black virtue behind the windows, Thibaut felt the woman’s fingers on his own. He gripped hers in turn. But she did not want a moment’s last solicitude. She pried his hand open. She put something in it. Thibaut felt and knew instantly that it was a playing card.

When he turned back to her the woman was dead.

Thibaut was loyal Main à plume. He could not have said why he slipped the card into his pocket without letting his comrades see.

On the stones under the woman’s other hand she had written letters on the road with her index finger as a nib. Her nail was wet with black ink from somewhere, provided by the city in that final moment of her need. She had written two last words.

Now it’s months later, and Thibaut huddles in a Paris doorway, his hand in his pocket to hold that card again. Over his own clothes he wears a woman’s blue-­and-­gold pajamas.

The sky is screaming. Two Messerschmitts come in below the clouds, chased by Hurricanes. Slates explode under British fire and the planes tear out of their dives. One of the German aircraft coils suddenly back in a virtuoso maneuver with weapons blazing and in a burning gust an RAF plane unfolds in the air, opening like hands, like a blown kiss, fire descending, turning an unseen house below to dust.

The other Messerschmitt veers toward the Seine. The roofs shake again, this time from below.

Something comes up from inside Paris.

A pale tree-­wide tendril, shaggy with bright foliage. It rises. Clutches of buds or fruit the size of human heads quiver. It blooms vastly above the skyline.

The German pilot flies straight at the vivid flowers, as if smitten, plant-­drunk. He plunges for the vegetation. It spreads trembling leaves. The great vine whips up one last house-­height and takes the plane in its coils. It yanks it down below the roofs, into the streets, out of sight.

There is no explosion. The snagged aircraft is just gone, into the deeps of the city.

The other planes frantically disperse. Thibaut waits while they go. He lets his heart slow. When he sets his face and steps out at last it is under a clean sky.

Thibaut is twenty-­four, hard and thin and strong. His eyes move constantly as he keeps watch in all directions: he has the fretful aggression and the gritted teeth of the new Parisian. He keeps his hair and his nails short. He squints with more than just suspicion: he does not have the spectacles he suspects he might need. Beneath his bright woman’s nightclothes he wears a dirty darned white shirt, dark trousers and suspenders, worn black boots. It has been some days since Thibaut has shaved. He’s scabbed and stinking.

Those pilots were foolhardy. Paris’s air is full of reasons not to fly.

China Miéville is the author of numerous books, including This Census-Taker, Three Moments of an Explosion, Railsea, Embassytown, Kraken, The City & The City, and Perdido Street Station. His works have won the World Fantasy Award, the Hugo Award, and the Arthur C. Clarke Award (three times). He lives and works in London. 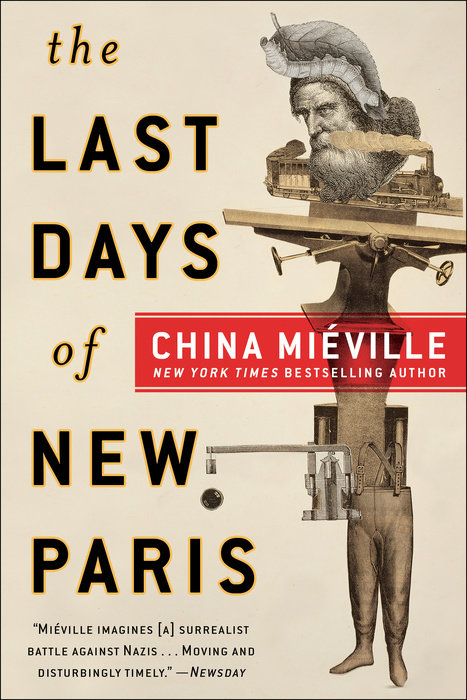