No one speaks the language of suspense more brilliantly than Kathy Reichs, author of the acclaimed Temperance Brennan series. In Speaking in Bones, the forensic anthropologist finds herself drawn into a world of dark secrets and dangerous beliefs, where good and evil blur.

Professionally, Temperance Brennan knows exactly what to do—test, analyze, identify. Her personal life is another story. She’s at a loss, wondering how to answer police detective Andrew Ryan’s marriage proposal. But the matter of matrimony takes a backseat when murder rears its head.

Hazel “Lucky” Strike—a strident amateur detective who mines the Internet for cold cases—comes to Brennan with a tape recording of an unknown girl being held prisoner and terrorized. Strike is convinced the voice is that of eighteen-year-old Cora Teague, who went missing more than three years earlier. Strike is also certain that the teenager’s remains are gathering dust in Temperance Brennan’s lab.

Brennan has doubts about working with a self-styled websleuth. But when the evidence seems to add up, Brennan’s next stop is the treacherous backwoods where the chilling recording (and maybe Cora Teague’s bones) were discovered. Her forensic field trip only turns up more disturbing questions—along with gruesome proof of more untimely deaths.

While local legends of eerie nocturnal phenomena and sinister satanic cults abound, it’s a zealous and secretive religious sect that has Brennan spooked and struggling to separate the saints from the sinners. But there’s nothing, including fire and brimstone, that can distract her from digging up the truth and taking down a killer—even as Brennan finds herself in a place where angels fear to tread, devils demand their due, and she may be damned no matter what.

Praise for Speaking in Bones

An excerpt from Speaking in Bones

“I’m unbound now. My wrists and ankles burn from the straps. My ribs are bruised and there’s a lump behind my ear. I don’t remember hitting my head. I’m lying very still because my whole body aches. Like I’ve been in a wreck. Like the time I crashed my bike. Why doesn’t my family save me? Is no one missing me? I have only my family. No friends. It was just too hard. I’m all alone. So alone. How long have I been here? Where is here? The whole world is slipping away. Everything. Everyone. Am I awake or asleep? Am I dreaming or is this real? Is it day or night?

“When they return they will hurt me again. Why? Why is this happening to me? I can’t hear a sound. No. That’s not true. I can hear my heart beating. Blood working inside my ears. I taste something bitter. Probably vomit stuck in my teeth. I smell cement. My own sweat. My dirty hair. I hate when my hair isn’t washed. I’m gonna open my eyes now. Got one. The other’s crusted shut. Can’t see much. It’s all blurry, like I’m looking up from way down underwater.

“I hate the waiting. That’s when the pictures take over my brain. Not sure if they’re memories or hallucinations. I see him. Always in black, his face crazy red and beaded with sweat. I avoid his eyes. Keep looking at his shoes. Shiny shoes. The candle flame’s a little yellow worm dancing on the leather. He stands over me, all big and nasty. Thrusts his horrid, smelly face close to mine. I feel his icky breath on my skin. He gets mad and yanks me by the hair. His veins go all bulgy. He screams and his words sound like they’re coming from another planet. Or like I’ve left my body and I’m listening from far away. I see his hand coming at me, clutching the thing so tight it quivers. I know I’m shaking but I’m numb. Or am I dead?

“My hands are going all cold and tingly. I shouldn’t be talking about him. I shouldn’t have said he was horrid.

“My mind is going all fuzzy. I have to stop talking.”

Silence, then the click-­creak of a door opening. Closing.

Footsteps, unhurried, firm on the floor.

The cadence of frantic breathing.

The thunk of a blow.

Sound as if dragging.

The tic of metal snapping into place.

“Will you answer me now?”

The drumming of agitated fingers. Scratching.

Pfff! The violent hurling of spit.

“You will not answer?”

“This has only begun.”

Click-­creak. The furious slam of a door.

The woman’s knuckles bulged pale under skin that was cracked and chapped. Using one knobby finger, she depressed a button on the object in the Ziploc.

I sat motionless, the hairs on my neck lifted like grass in a breeze.

The woman’s eyes stayed hard on mine. They were green flecked with yellow, and made me think of a cat. A cat that could bide, then pounce with deadly accuracy.

I let the silence stretch. Partly to calm my own nerves. Mostly to encourage the woman to explain the purpose of her visit. I had flight reservations in just a few hours. So much to do before heading to the airport. To Montreal and Ryan. I didn’t need this. But I had to know the meaning of the terrible sounds I’d just heard.

The woman remained angled forward in her chair. Tense. Expec­tant. She was tall, at least six feet, and wore boots, jeans, and a denim shirt with the cuffs rolled up her lower arms. Her hair was dyed the color of the clay at Roland Garros. She’d yanked it into a bun high on her head.

My eyes broke free from the cat-­gaze and drifted to the wall at the woman’s back. To a framed certificate declaring Temperance Brennan a diplomate of the American Board of Forensic Anthropology. D-­ABFA. The exam had been a bitch.

I was alone with my visitor in the 120 square feet allocated to the Mecklenburg County Medical Examiner’s consulting forensic anthropologist. I’d left the door open. Not sure why. Usually I close it. Something about the woman made me uneasy.

Familiar workplace sounds drifted in from the corridor. A ringing phone. A cooler door whooshing open then clicking shut. A rubber-­wheeled gurney rolling toward an autopsy suite.

“I’m sorry.” I was pleased that my voice sounded calm. “The receptionist provided your name but I’ve misplaced my note.”

That caused a little ping in my brain. What?

“But I never rely on luck. I work hard at what I do.” Though I guessed Strike’s age at somewhere north of sixty, her voice was still twenty­something strong. The accent suggested she was probably local.

“He knew the risk, chose to smoke.” Slight lift of one shoulder. “You pay the price.”

“What is it you do?” I repeated, wanting to draw Strike back on point.

“That is the task of law enforcement in conjunction with coroners and medical examiners,” I said.

“And you pros nail it every time.”

I bit back another priggish response. Strike had a point. Stats I’d read put the number of missing persons in the United States at around 90,000 at any given time, the number of unidentified remains from the past fifty years at more than 40,000. The last count I saw placed the North Carolina UID total at 115.

Strike placed the Ziploc beside a bright yellow case file on my blotter. In it was a gray plastic rectangle, roughly one inch wide, two inches long, and a half inch thick. A metal ring at one end suggested dual functions as a recorder and a key chain. A loop of faded denim suggested the device had once hung from the waistband of a pair of jeans.

The yellow folder called to me. Accusingly. Two months earlier a man had died in his recliner, TV remote clutched in one hand. The previous weekend his mummified corpse had been found by a very unhappy landlord. I needed to wrap this up and get back to my analysis. Then home to packing and the delivery of my cat to the neighbor.

But those voices. My pulse was still struggling to return to normal. I waited.

“The recording lasts almost twenty-­three minutes. But the five you heard is plenty to get the drift.” Strike gave a tight shake of her head. Which reangled the bun to an off-­center tilt. “Scares the patootie out of you, don’t it?”

“The audio is disturbing.” An understatement.

“Perhaps you should play it for the police.”

“I believe I heard three voices?” Curiosity was overcoming my reticence to engage. And apprehension.

“Only got a theory on one.”

I brushed my eyes past my watch. Not as discreetly as I thought.

“Unless you’re not ‘tasked’ with sticking names on the dead.” Strike hooked sarcastic finger quotes around the term I’d used moments earlier.

Kathy Reichs is the author of nineteen New York Times bestselling novels and the co-author, with her son, Brendan Reichs, of six novels for young adults. Like the protagonist of her Temperance Brennan series, Reichs is a forensic anthropologist—one of fewer than one hundred ever certified by the American Board of Forensic Anthropology. A professor in the Department of Anthropology at the University of North Carolina at Charlotte, she is a former vice president of the American Academy of Forensic Sciences. Reichs’s own life, as much as her novels, is the basis for the TV show Bones, one of the longest-running series in the history of the Fox network. 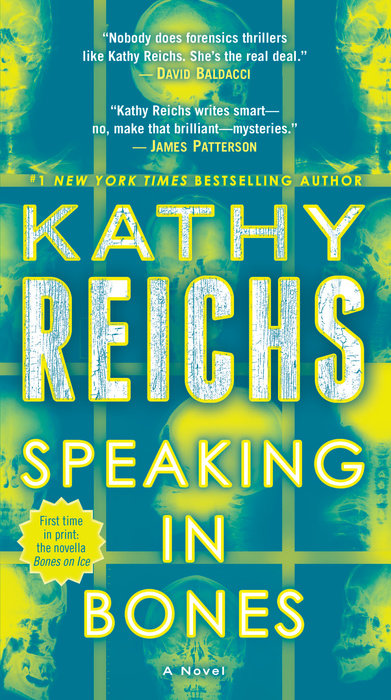