Michael Shaara reinvented the war novel with his Pulitzer Prize–winning masterpiece of Gettysburg, The Killer Angels. Jeff Shaara continued his father’s legacy with a series of centuries-spanning New York Times bestsellers. Together at last in eBook form, this volume assembles three Civil War novels from America’s first family of military fiction: Gods and Generals, The Killer Angels, and The Last Full Measure.

Gods and Generals traces the lives, passions, and careers of the great military leaders—Thomas “Stonewall” Jackson, Winfield Scott Hancock, Joshua Chamberlain—from the gathering clouds of war. The Killer Angels re-creates the fight for America’s destiny in the Battle of Gettysburg, the four most bloody and courageous days of our nation’s history. And The Last Full Measure brings to life the final two years of the Civil War, chasing the escalating conflict between Robert E. Lee and Ulysses S. Grant—complicated, heroic, and deeply troubled men—through to its riveting conclusion at Appomattox.

Contains a preview Jeff Shaara’s new novel of the Civil War, A Blaze of Glory.

“Brilliant does not even begin to describe the Shaara gift.”—The Atlanta Journal-Constitution

“Shaara’s beautifully sensitive novel delves deeply in the empathetic realm of psycho-history, where enemies do not exist—just mortal men forced to make crucial decisions and survive on the same battlefield.”—San Francisco Chronicle, on Gods and Generals

“Remarkable . . . a book that changed my life . . . I had never visited Gettysburg, knew almost nothing about that battle before I read the book, but here it all came alive.”—Ken Burns, on The Killer Angels

“The Last Full Measure is more than another historical novel. It is rooted in history, but its strength is the element of humanity flowing through its characters. . . . The book is compelling, easy to read, well researched and written, and thought-provoking. . . . In short, it is everything that a reader could ask for.”—Chicago Tribune

An excerpt from The Civil War Trilogy 3-Book Boxset (Gods and Generals, The Killer Angels, and The Last Full Measure)

After Lee's victory at Bull Run, he took his men on a march into Maryland, drawing the Union army out of Virginia. But Union commander George McClellan captured Lee's plans; for once in his life he moved quickly to pin the Confederates down in the fields around the town of Sharpsburg, by Antietam Creek.

On September 17, 1862, the two armies clashed in the bloodiest day of the entire war. McClellan launched a series of uncoordinated attacks on Lee's outnumbered army. Joshua Chamberlain served in the Union army's reserve, waiting all day to be ordered into the bloody fight.


Excerpt
They reached a small village, Porterstown, and marched through wide streets, the townspeople standing in doorways, leaning out windows, some waving, others just staring. Farther ahead, on the creek itself, was the Middle Bridge, held by the Confederate division of Daniel Harvey Hill. The rebel forces were dug in, back, away from the creek, and to their front the Federal army was spreading out, into lines of attack, were crossing the creek and preparing for the assault. The battle had begun on the far right, just after dawn, and now, as the sun began to rise up behind them, Chamberlain could hear the steady rumble, and as they moved closer, the sharp sounds of single cannon. He sat high on his horse, moving along with the same slow rhythm of the march, but now the men did not fall out, did not feel the weight of the hot September morning, but stared to the front, marching steadily, closer to the sound of the guns.

He heard the steady clatter of muskets now, still off to the right of the road, to the northwest. The battle is not in front of us, he thought. Strange that we should move this way...not up there.

In front of them, Chamberlain saw a rise, a long, wide hill, and as they began to move up, he saw guns, rows of black cannon set into shallow, round depressions before the crest of the hill. Just then they began to fire, quick bursts of gray smoke, and a sudden shocking boom that startled him and his horse. He bounced around on the road, had to grab the horse hard to calm him. From over the hill he saw Ames, riding hard, past lines of troops that were moving away now, to the right, toward the sounds of the battle.

Ames reined up his horse, and Chamberlain saw he was sweating. "Colonel, we're here, right here. Keep the men in column lines. Let's move them out into this field. Wait for further orders. We are part of the reserve."

Chamberlain turned, and Ames rode past him, into the columns of men, and gave the command to the bugler. With the signal, the men moved quickly off the road. Then Ames rode up again, toward the front of the column, slowed his horse as he reached Chamberlain, said, "Colonel, keep them tight, keep them ready. I am to survey the field to our front."

Chamberlain watched him ride away, up the long hill, turning his horse to the side behind the rows of black cannon. The guns began to fire again, a loud and thunderous volley, and the hill became a great, thick fog bank.

He stayed on his horse, saw now across the road, on the left, vast numbers of troops, lines disappearing into a distant grove of trees, and the men not moving, keeping their formations. He rode out the other way, to the right, into the grass, saw more troops farther out that way, a great field of blue, waiting. He looked to his own men, saw the companies staying in their formations, coming off the road, and he rode up to the head of one column, saw Captain Spears of Company G, a small, sharp man who had also been a teacher. He had a narrow, thick beard, sat on a horse, watched Chamberlain approach, puffed on a large round pipe.

"Well, Colonel, do you think we will get our chance?"

Chamberlain looked back to the crest of the hill, could still not see through the smoke, and another volley thundered out, shaking the ground, startling his horse again.

"Whoa, easy...We'll see, Captain. Right now we must be ready...be ready to move forward on command!" He felt a little foolish, a vague order, felt again as if he were left out, didn't know what was happening. The battle sounds had continued to the northwest, and he wondered, Are they moving away, around us? He glanced at Spears, said, "I'll be right back...just going up the crest a ways, take a look maybe."

He turned the horse, then decided to dismount instead. This wasn't a parade. He jumped down, felt his belt, his pistol, began to walk toward the thick cloud of smoke.

The guns continued to fire, every minute or so, and he wondered, How far away is the enemy? There had been no explosions, no incoming shells, none of the sounds he'd been told about, coached about, by Ames, just the deadening thunder of their own big guns....

Now, from the sounds of the battle, he saw his first troops, thick lines of blue, uneven and ragged formations, moving toward a cornfield, and then smoke, solid lines of gray, and in a few seconds the sound reached him, the chattering musket fire, and the blue lines were in pieces, men moving back, some still advancing, some not moving at all. He saw more lines now, solid blocks of blue spreading wide, advancing, and more smoke, and more sounds, and then, farther away, a glimpse through the smoke, other lines of men, some moving, some firing, quick flashes of white and yellow, and the big guns beside him firing again....

He turned to watch the men working the cannon, and was startled to see more men, his men, watching the battle, lying on the ground, creating a neat blue patch on the hill. He had not thought anyone else would be up here, should not have been up here; he should not be up here, but he knew they could not just wait, could not sit behind some big hill and hear it all and not see.

Chamberlain stood up, began to wave his arms, fast and high, motioning to his men, and another blast came from the guns. He braced himself, did not fall, kept waving, back, move back, wondering if they saw him or were ignoring him. He moved along the hillside, tried to yell, but the sound of the guns took his voice away, and suddenly he heard a high, distant scream, louder now, whistling toward him, dropping down on him from behind. He turned, saw nothing, but the sound pierced his ears, and the ground suddenly flew high around him, dirt spraying him, knocking him down, and he lay still, shook his head...checked, all right, but...a bad day for the ears. Then another scream, overhead, and behind the hill, down where the rest of his men sat waiting, there was another explosion, and he tried to see, but it was beyond the crest.

Suddenly, someone had him under the arms, lifting him, and he said, "No, I'm all right," and he saw the face of an officer, a man with black crust under his eyes, around his mouth and nose, glaring at him with eyes of cold steel.

"You are bloody well not all right, you damned fool! Get these men back off this hill! You're drawing fire to my guns!"

Michael Shaara was born in Jersey City in 1929 and graduated from Rutgers University in 1951. His early science fiction short stories were published in Galaxy magazine in 1952. He later began writing other works of fiction and published more than seventy short stories in many magazines, including The Saturday Evening Post, Cosmopolitan, and Redbook. His first novel, The Broken Place, was published in 1968. But it was a simple family vacation to Gettysburg, Pennsylvania, in 1966 that gave him the inspiration for his greatest achievement, the Pulitzer Prize-winning novel The Killer Angels, published in 1974. Michael Shaara went on to write two more novels, The Noah Conspiracy and For Love of the Game, which was published posthumously after his death in 1988. 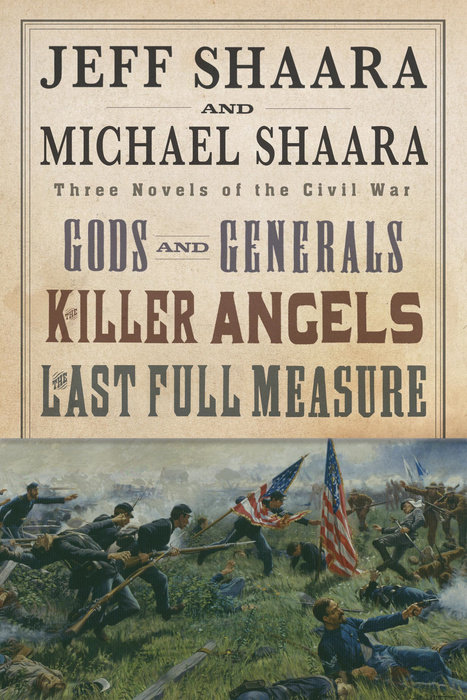