NEW YORK TIMES BESTSELLER • The little-known true story of Marie-Madeleine Fourcade, the woman who headed the largest spy network in occupied France during World War II, from the bestselling author of Citizens of London and Last Hope Island

“Brava to Lynne Olson for a biography that should challenge any outdated assumptions about who deserves to be called a hero.”—The Washington Post

In 1941 a thirty-one-year-old Frenchwoman, a young mother born to privilege and known for her beauty and glamour, became the leader of a vast intelligence organization—the only woman to serve as a chef de résistance during the war. Strong-willed, independent, and a lifelong rebel against her country’s conservative, patriarchal society, Marie-Madeleine Fourcade was temperamentally made for the job. Her group’s name was Alliance, but the Gestapo dubbed it Noah’s Ark because its agents used the names of animals as their aliases. The name Marie-Madeleine chose for herself was Hedgehog: a tough little animal, unthreatening in appearance, that, as a colleague of hers put it, “even a lion would hesitate to bite.”

No other French spy network lasted as long or supplied as much crucial intelligence—including providing American and British military commanders with a 55-foot-long map of the beaches and roads on which the Allies would land on D-Day—as Alliance. The Gestapo pursued them relentlessly, capturing, torturing, and executing hundreds of its three thousand agents, including Fourcade’s own lover and many of her key spies. Although Fourcade, the mother of two young children, moved her headquarters every few weeks, constantly changing her hair color, clothing, and identity, she was captured twice by the Nazis. Both times she managed to escape—once by slipping naked through the bars of her jail cell—and continued to hold her network together even as it repeatedly threatened to crumble around her.

Now, in this dramatic account of the war that split France in two and forced its people to live side by side with their hated German occupiers, Lynne Olson tells the fascinating story of a woman who stood up for her nation, her fellow citizens, and herself.

“Fast-paced and impressively researched . . . Olson writes with verve and a historian’s authority. . . . With this gripping tale, Lynne Olson pays [Marie-Madeleine Fourcade] what history has so far denied her. France, slow to confront the stain of Vichy, would do well to finally honor a fighter most of us would want in our foxhole.”—The New York Times Book Review

Leaping into the Unknown

Her sister’s drawing room was already crowded when Marie-Madeleine Fourcade arrived. In one corner, Georges, her brother-in-law, was deep in discussion with a cluster of male guests. Spotting her sister in another corner, Marie-Madeleine crossed the room to join her.

Yvonne introduced her to several women, who, after acknowledging the newcomer, returned to their conversation about children, their latest travels, and their incessant problems with servants. At one point, between sips of tea, a small, birdlike woman named Yvonne de Gaulle held forth on the soothing virtues of the countryside and how important it was to have a house in the country where a busy man like her husband could find a quiet refuge.

Her attention wandering, Marie-Madeleine glanced around the room. She recognized several of the men—a number of them military officers like Georges, along with a scattering of diplomats, journalists, and business leaders. Ever since she’d returned to Paris, her sister and brother-in-law had included her in their circle of influential friends, many of whom frequented the lively late-afternoon salon that the couple had established at their apartment on rue Vaneau, not far from the French capital’s government ministries and embassies.

She caught the eye of Georges, who beckoned to her. As she joined the group around him, she was aware of the appreciative glances directed her way. Cool and elegant, with porcelain skin and high cheekbones, the twenty-six-year-old blonde was used to being the object of male scrutiny.

After introducing her to a couple of guests she had not yet met, Georges mentioned her passion for cars and fast driving and boasted about her success in a recent long-distance car rally. For a minute or two, she and the others debated the merits of various cars, including the speedy model she owned—a Citroën Traction Avant. But the conversation soon returned to the subject that had preoccupied the men from the moment they had arrived that afternoon: Nazi Germany’s shocking occupation of the demilitarized Rhineland just a few weeks before.

On March 7, 1936, German troops had marched into the Rhineland, a strip of western Germany straddling the Rhine River and bordering France, Luxembourg, Belgium, and the Netherlands. After Germany’s defeat in World War I, the area had been declared a buffer zone, and a ban had been imposed on any installation there of German forces or fortifications. Adolf Hitler’s defiance of the ban was his most flagrant violation to date of the 1919 Versailles Treaty and his most dramatic challenge thus far to the Western allies Britain and France.

If either country had responded with force, Hitler’s troops, as he later acknowledged, would have retreated immediately. But neither the British nor French lifted a finger to stop the incursion—a failure that appalled those at Georges and Yvonne’s salon on that lovely April afternoon.

Several of the guests were army intelligence officers, who, for the last three years, had been providing information to the French government detailing Hitler’s mounting preparations for war. Indeed, in the past few months they had passed on advance intelligence of the Rhineland incursion itself. To all these warnings, government officials and the top military command had paid little heed.

The top brass were equally indifferent to increasingly urgent calls by some of their underlings for the modernization and reform of the French military. As one observer later put it, “The minds of the French generals had ground to a halt and were already thickly coated with rust.” In their preparations for a future war, members of the high command remained committed to the kind of defensive warfare that had eventually brought the Allies, at an extremely high cost, a victory in World War I. They paid little or no attention to the swift technological advances in the development of such offensive weapons as planes and tanks. They also went out of their way to block the advancement of younger, more vigorous officers who preached the need for a revolution in military tactics and strategy.

Two of the most prominent members of that younger group—Lieutenant Colonel Charles de Gaulle and Major Georges Loustaunau-Lacau—took center stage in the discussion on rue Vaneau, engaging in a debate that quickly escalated into a full-blown argument. It soon became obvious to Marie-Madeleine that the two officers viewed each other as rivals, which, considering how much they had in common, was perhaps not surprising.

They both were products of Saint-Cyr, France’s foremost military academy, and the elite École Supérieure de Guerre, the country’s graduate war college. Both had fought in World War I, been wounded, and received multiple citations for bravery. After the war, they had served at different times on the staff of Marshal Philippe Pétain, the hero of the Battle of Verdun, who had held several key postwar posts—commander in chief of the army, inspector general, and minister of war. The forty-five-year-old de Gaulle and the forty-two-year-old Loustaunau-Lacau were brilliant, ambitious, and egocentric, with a rebellious streak that had gotten them in considerable trouble at various times with Pétain and other military superiors. Each loved the spotlight, and neither wanted to share it with the other.

After Germany occupied the Rhineland, de Gaulle had submitted an article predicting its disastrous consequences to the influential journal Défense Nationale, which refused to publish it. Now, leaning against the apartment’s fireplace mantel, he criticized the high command’s tactical and strategic ineptness, blasting its reliance on prepared fortifications like the Maginot Line and arguing for creation of a fast-moving mechanized army working closely with and supported by aircraft. Loustaunau-Lacau interrupted, dismissing de Gaulle’s idea of a strike force as unworkable. As they argued, they seemed to agree on only one point: If the French military were not immediately reshaped, the army would collapse, and the country would be crushed by Germany in a war that was drawing ever closer.

Fascinated by the verbal fireworks between them, Fourcade had no idea of the profound impact that both men would soon have on her life.

Lynne Olson is the New York Times bestselling author of Last Hope Island: Britain, Occupied Europe, and the Brotherhood That Helped Turn the Tide of War, Those Angry Days: Roosevelt, Lindbergh, and America’s Fight Over World War II, 1939–1941, and Citizens of London: The Americans Who Stood with Britain in Its Darkest, Finest Hour. Among her five other books is Troublesome Young Men: The Rebels Who Brought Churchill to Power and Helped Save England. She lives with her husband in Washington, D.C.

To inquire about booking Lynne Olson for a speaking engagement, please contact the Penguin Random House Speakers Bureau at speakers@penguinrandomhouse.com. 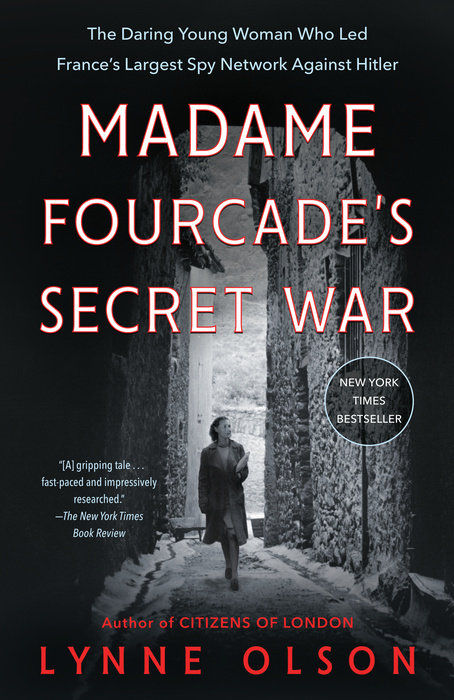