NEW YORK TIMES BESTSELLER • The Republic has fallen. Sith Lords rule the galaxy. Jedi Master Obi-Wan Kenobi has lost everything . . . everything but hope.

Tatooine—a harsh desert world where farmers toil in the heat of two suns while trying to protect themselves and their loved ones from the marauding Tusken Raiders. A backwater planet on the edge of civilized space. And an unlikely place to find a Jedi Master in hiding, or an orphaned infant boy on whose tiny shoulders rests the future of a galaxy.

Known to locals only as “Ben,” the bearded and robed offworlder is an enigmatic stranger who keeps to himself, shares nothing of his past, and goes to great pains to remain an outsider. But as tensions escalate between the farmers and a tribe of Sand People led by a ruthless war chief, Ben finds himself drawn into the fight, endangering the very mission that brought him to Tatooine.

Ben—Jedi Master Obi-Wan Kenobi, hero of the Clone Wars, traitor to the Empire, and protector of the galaxy’s last hope—can no more turn his back on evil than he can reject his Jedi training. And when blood is unjustly spilled, innocent lives threatened, and a ruthless opponent unmasked, Ben has no choice but to call on the wisdom of the Jedi—and the formidable power of the Force—in his never-ending fight for justice.

The suns had determined this at the dawn of creation. Brothers, they were, until the younger sun showed his true face to the tribe. It was a sin. The elder sun attempted to kill his brother, as was only proper.

Burning, bleeding, the younger sun pursued his sibling across the sky. The wily old star fled for the hills and safety, but it was his fate never to rest again. For the younger brother had only exposed his face. The elder had exposed his failure.

And others had seen it—to their everlasting sorrow.

The first Sand People had watched the battle in the sky. The suns, dually covered in shame, turned their wrath on the witnesses. The skybrothers’ gaze tore at the mortals, burning through flesh to reveal their secret selves. The Sand People saw their shadows on the sands of Tatooine, and listened. The younger spirit urged attack. The elder told them to hide. Counsels, from the condemned.

The Sand People were condemned, as well. Always walking with the twin shadows of sacrilege and failure beside them, they would hide their faces. They would fight. They would raid. And they would run.

Most Sand People struck at night, when neither skybrother could whisper to them. A’Yark preferred to hunt at dawn. The voices of the shadows were quieter then—and the settlers who infested the land could see their doom clearly. That was important. The elder sun had failed by not killing his brother. A’Yark would not fail, had never failed, in killing settlers. The elder sun would see the example, and learn . . .

A’Yark charged toward the old farmer who had given the cry. The raider’s metal gaderffii smashed into the human’s naked chin, shattering bone. A’Yark surged forward, knocking the victim to the ground. The settler struggled, coughing as he tried to repeat the cry. “Tuskens!”

Years earlier, other settlers had given that name to the Sand People who obliterated Fort Tusken. The raiders back then had welcomed the name into their tongue; it was proof the walking parasites had nothing the Sand People could not take. But A’Yark couldn’t stand to hear the proud name in the mouths of the appalling creatures—and few were as ugly as the bloody settler now writhing on the sand. The human was ancient. Apart from a bandage from a recent head injury, his whitish hairs and withered flesh were exposed to the sky. It was horrible to see.

A’Yark plunged the hefty gaderffii downward, its metal flanges crushing against the settler’s rib cage. Bones snapped. The weapon’s point went fully through, grinding against the stone surface beneath. The old settler choked his last. The Tusken name again belonged only to the Sand People.

Immediately A’Yark charged toward the low building, a short distance ahead. There was no thought to it. No predator of Tatooine ever stopped to reflect on killing. A Tusken could be no different.

To think too long was to die.

The human nest was a wretched thing, something like a sketto hive: scum molded and shaped into a disgusting half bulb, buried in the sand. This one was formed from that false rock of theirs, the “synstone.” A’Yark had seen it before.

Another shout. A pasty white biped with a bulging cranium appeared in the doorway of the building, brandishing a blaster rifle. A’Yark discarded the gaderffii and lunged, ripping the gun from the startled settler’s hands. A’Yark did not understand how a blaster rifle tore its victim apart, but understanding wasn’t necessary. The thing had a use. The marauder put it to work on the settler, who had no use.

Well, that wasn’t exactly true. The settlers did have a use: to provide more rifles for the Tuskens to take. It might have been a funny thought, if A’Yark ever laughed. But that concept was as alien as the white-skinned corpse now on the floor.

So many strange things had come to live in the desert. And to die.

Behind, two more raiders entered the structure. A’Yark did not know them. The days of going into battle flanked by cousins were long since past. The newcomers began flipping crates in the storage area, spilling contents. More metal things. The settlers were obsessed with them.

The warriors were, too—but it wasn’t time for that. A’Yark barked at them. “N’gaaaiih! N’gaaaiih!”

The youths didn’t listen. They were not A’Yark’s sons. A’Yark had but one son, now, not quite old enough to fight. Nor did these warriors have fathers. It was the way, these days. Mighty tribes had become mere war parties, their ranks constantly evolving as survivors of one group melted into another.

That A’Yark led this raid at all bespoke their misery. No one on the attack had lived half as long as A’Yark had, or seen so much. The best warriors had fallen years before; these youths certainly wouldn’t live to vie for leadership. They were fools, and if A’Yark did not kill them for their foolishness, they would die some other way.

Not this morning, though. A’Yark had chosen the target carefully. This farm was close to the jagged Jundland Wastes, far from the other villages—and it had few of the vile structures by which the residents wrenched water from a sky none could own. The fewer spires—vaporators, the farmers called them—the fewer settlers. Now, it would seem, there were none. Except for the young warriors fumbling, all was quiet.

But A’Yark, who had lived to see forty cycles of the starry sky, was not fooled. A weapon stood beside the doorway leading outside. The old human’s, left by accident? Rifle to silvery mouthpiece, A’Yark sniffed.

No. With one swift motion, A’Yark smashed the weapon against the doorjamb. The rifle had been used to kill a Tusken. The smell of sweat from another day still clung to the stock. It differed from the old human’s scent, and that of the white creature the settlers called a Bith. Someone else was here. But the rifle could not be used now, nor ever again.

A weapon that killed a Tusken had no more power than any other, so far as A’Yark was concerned; such superstitions were for weaker minds. But just as Tuskens prized their banthas, the settlers seemed to prize individual rifles, etching symbols on their stocks. The human that carried this one was more formidable than the old man and the Bith creature, but he would have to resort to something new and unfamiliar next time. If he survived the day.

A’Yark would see that he didn’t.

The war leader reclaimed the gaderffii from the floor and shoved past the looting youths. Footsteps in the sand led around back, where three soulless vaporators hummed and defiled. A small hut for servicing the foul machines sat behind them.

Fitting. A’Yark would make the inhabitants bleed for using the vaporators. Slowly, and so the suns would see. What the settlers had stolen would return to the sand, a drop at a time.

No answer. Of course, there would be none—but someone was surely inside and had heard the words. The warrior was proud of remembering them. A human sister had joined A’Yark’s family years ago; the Tuskens often replenished their numbers by kidnapping. The band needed reinforcements now, but would not take anyone here. The settlers’ presence so near the wastes was too great an offense. They would die, and others would see, and the Jundland would be left alone.

The other warriors filed from the house and surrounded the service hut. The Tuskens numbered eight; none could challenge them. Cloth-wrapped hands curled around the shaft of an ancient gaderffii, A’Yark inserted the traang—the curved end of the weapon—into the door handle.

The metal door creaked open. Inside, a quivering trio of humans huddled amid spare parts for the thirst machines. A black-haired woman clutched a swaddled infant, while a brown-haired male held them both. He also held a blaster pistol.

It was the owner of the busted rifle—and A’Yark could tell he was missing the weapon now. Swallowing his fear, the young man looked right into A’Yark’s good eye. “You—go! We’re not afraid.”

“Settlers lie,” A’Yark said, the strange words startling the humans almost as much as they startled the other Tuskens. “Settler lies.”

Eight gaderffii lifted to the sky, their spear-points glinting in the morning light. A’Yark knew some would land true. And the old skybrother above would see again what real bravery was—

The sound echoed over the horizon. As one, the war party looked north. The sound came again, louder this time. Its meaning was unmistakable.

The youngest Tusken in the party said it first: krayt dragon! 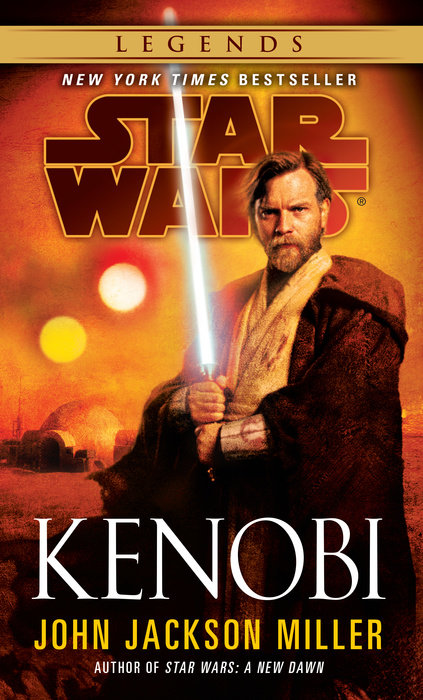