“The definitive account of America’s heroic but ultimately doomed effort in one of Afghanistan’s most rugged regions.”—Sebastian Junger, author of Tribe

“A saga of courage and futility, of valor and error and heartbreak.”—Rick Atkinson, author of the Liberation Trilogy

When we think of the war in Afghanistan, chances are we're thinking of a small, remote corner of the country where American military action has been concentrated: the Pech and its tributary valleys in Kunar and Nuristan provinces. The rugged, steep terrain and thick forests made the region a natural hiding spot for targets in the American war on terror, from Osama bin Laden to the Islamic State, and it has been the site of constant U.S. military activity for nearly two decades. Even as the U.S. presence in Afghanistan transitions to a drone war, the Pech has remained at the center of it, a testbed for a new method of remote warfare.

Wesley Morgan first visited the Pech in 2010, while he was still a college student embedding with military units as a freelancer. By then, the Pech and its infamous tributary the Korengal had become emblematic of the war, but Morgan found that few of the troops fighting there could explain why their remote outposts had been built. In The Hardest Place, he unravels the history those troops didn’t know, captures the culture and reality of the war through both American and Afghan eyes, and reports on the snowballing American missteps that made each unit’s job harder than the last as storied outfits like Marines, paratroopers, Rangers, Green Berets, and SEALs all took their turn.

Through reporting trips, hundreds of interviews with Americans and Afghans, and documentary research, Morgan writes vividly of large-scale missions gone awry, years-long hunts for single individuals, and the soldiers, Marines, commandos, and intelligence operatives who cycle through, along with several who return again and again to the same slowly evolving fight.

As the war drags on through its fourth presidential administration, Morgan concludes that we've created a status quo that could last forever in the Pech, with the military and intelligence agencies always in search of the next target.

An excerpt from The Hardest Place

In Search of the Sheikh

American troops set up their first base in Kunar Province as the snow melted in the mountains in early 2002, the spring after the September 11 attacks and the ensuing autumn air war. They came trying to pick up a trail that had gone cold the previous December at the battle of Tora Bora, in another Afghan mountain range fifty miles to Kunar’s south—the trail of Osama bin Laden.

I interviewed more than two hundred American veterans of Kunar before I found someone who knew firsthand how, why, and when U.S. troops entered the mountainous, nineteen-hundred-square-mile province and established the first of what would become a network of over a dozen remote outposts there. Tom Greer was a wiry former member of the Army’s premier counterterrorist unit, Delta Force. In the spring of 2002, after leading the Delta team that came tantalizingly close to bin Laden at Tora Bora, he had been a major overseeing three small reconnaissance teams that paired some of the most highly trained commandos in the U.S. military with CIA officers and specialists in electronic eavesdropping. Wearing beards and local clothes and driving around in the Toyota Hilux pickup trucks that are ubiquitous in Afghanistan, the operators of these Advanced Force Operations teams were fanning out across the country’s east, picking sites for little encampments. No one meant for these sites to become permanent, as most of them eventually did; they were just meant to be lily pads, places to set up radio relay points and get a good night’s sleep in between reconnaissance forays into the mountains in Hiluxes or on all-terrain vehicles.

The team that Tom Greer sent bouncing up Kunar’s rocky, gravel-surfaced main road in a couple of pickup trucks sometime in the spring of 2002 was “SEAL heavy,” he told me more than a decade later—made up mostly of operators from Delta Force’s Navy equivalent, SEAL Team 6. The SEALs and other personnel who accompanied them were entering a province of some 500,000 people “and an equal number of goats,” as the author of a U.S. diplomatic cable a few years later would joke, where ribbons of green between the brown mountains housed fields of corn and wheat and groves of walnut trees, whose fruit the province is famous for. Kunar was a conservative, rural place, where women were seldom seen outside except when working in the fields by their villages. The qualities that made it different from other eastern conservative, rural provinces—its historically complex relationship with the central government, the role of the timber trade in its economy, the Saudi-inspired brand of Islam that had become popular there during the war against the Soviets—were not obvious to special operators just starting to get the feel of the country many of them would come back to over and over again.

A couple of Delta Force operators had already visited Kunar during the fall air campaign, working in conjunction with the CIA, but they hadn’t stayed. This time the reconnaissance team stopped when it reached a dusty, rectangular compound a mile south of Asadabad, the provincial seat where the Pech River empties into the larger Kunar River, the province’s spine. A site where there was already a fort of sorts was ideal, so that was where the SEALs made camp. Greer went up to visit the team once it was settled in. A Delta Force operator on a different recon team had recently named another new outpost Camelot. The SEALs had the honor of picking a nickname for the Asadabad camp, and they chose a less high-minded one: Puchi Ghar, because they were under the mistaken impression that puchi ghar meant “dog-shit mountain” in Pashto, and that was the vibe they got from the place. (In fact, the phrase meant something like “crass mountain” and sounded nonsensical to Afghan ears.)

The compound didn’t look like much, it was true—some broken-down mud-brick walls and buildings centered on a courtyard about five hundred feet long and five hundred feet wide, separated from the wide Kunar River by a road and some stands of trees. Locals called the compound Topchi Base because topchi was the Pashto word for “artillery,” and the Soviets had based howitzers there. More recently, Taliban fighters had used the site as a barracks, although their government had held little sway in Kunar outside Asadabad. No one imagined at the time that U.S. troops and CIA officers would occupy this base—eventually renamed Forward Operating Base Asadabad and then FOB Wright, after a Green Beret killed nearby in 2005, but often just called A-Bad—for twelve and a half years and continue to visit it even after that.

Of the seven thousand troops the United States had on the ground in Afghanistan that spring, when debris was still being cleared from the grounds of the World Trade Center, only a handful were directly involved in the hunt for Osama bin Laden. For the SEAL-led team that established FOB Asadabad, as for the other recon teams working in the east, picking up bin Laden’s scent was priority number one. A top CIA official at Langley had recently stopped sending out a daily memo about progress on the bin Laden hunt, because there wasn’t any, and CIA officers working out of an abandoned hotel in Kabul—their new station—were eager to use the military teams to get back on track.

The Asadabad team was “looking for anything related to UBL, chasing his ghost up there,” Greer recalled, using the government acronym for Usama bin Laden, then forty-five. “Any old fart that was rumored to be associated with UBL or an old acquaintance was on the target deck.” On May 6, within days of the special operations team’s arrival, the CIA fired the first shot in America’s war in Kunar, using one of its newly armed Predator drones to launch a Hellfire missile just outside a village in the Shigal valley northeast of Asadabad. The agency suspected that a pair of bin Laden’s old Afghan allies from the 1980s, including the notorious warlord Gulbuddin Hekmatyar, were harboring him.

To avoid tipping their hand, officials in Washington told reporters only that they had been targeting Hekmatyar, not bin Laden. Questioned about the strike during an exchange with reporters, President George W. Bush was cryptic about whom the intelligence agency had been trying to kill in Kunar: “I can assure you, when we go after individuals in the theater of war, it’s because they intend to do some harm to America.”

When asked at a press conference less than a week after the September 11 attacks whether he wanted bin Laden killed, Bush had answered with the bellicosity of a gunfighter: “I want justice. And there’s an old poster out west as I recall that says, ‘Wanted: Dead or Alive.’ ” The president did not mention bin Laden the next month when he announced the beginning of the U.S.-led aerial bombardment of Afghanistan, however. The military air campaign focused not on finding and striking individual al-Qaida leaders but on driving the Taliban regime from power and thereby removing the sanctuary from which al-Qaida had planned its attacks.

For the first week or so after the attacks on New York and Washington, the CIA had had a good grasp on where bin Laden was, maybe better than his Taliban hosts did. According to the agency’s station chief in Pakistan at the time, a CIA informant within al-Qaida made contact the Monday after the attacks to describe a town hall meeting the terrorist chief had just held with his followers near Jalalabad, the nearest big city to Kunar’s south, straddling the highway from Kabul to Pakistan.

Untouched by the air campaign, bin Laden next surfaced at Tora Bora in the White Mountains south of Jalalabad in early December 2001. There, the U.S. military’s early unwillingness to commit ground troops beyond a handful of special operators to call in air strikes allowed bin Laden to slip away. As part of the meager American force sent to Tora Bora, Greer, the Delta Force major who later sent the SEALs to Kunar, had been there to hear the final, regretful radio broadcast bin Laden made to his followers in mid-December as the bombs fell in the mountains: “O youth of the nation. Crave death and life will be given to you.” Then bin Laden was gone, along with his Egyptian deputy, Dr. Ayman al-Zawahiri.

The way the U.S. government divvied up counterterrorism duties after the Taliban’s ouster, the hunt for al-Qaida operatives in Pakistan fell to the CIA, whose clandestine activities were more acceptable to Pakistan’s leaders than a uniformed presence. The hunt inside Afghanistan would become one of the many responsibilities of Operation Enduring Freedom, as the U.S. military mission in Afghanistan had been named (and would remain named for thirteen years). The hunters would come from Fort Bragg, North Carolina’s Joint Special Operations Command, or JSOC—the headquarters responsible for overseeing Delta, Team 6, and other top-tier, top secret military counterterrorism units.

Wesley Morgan is a military affairs reporter who most recently covered the Pentagon for two and a half years at Politico. He previously worked as a freelance journalist in Washington, D.C., Iraq, and Afghanistan, contributing stories to The Washington Post, The New York Times, The Atlantic and other publications. He is an alumnus of Princeton University. 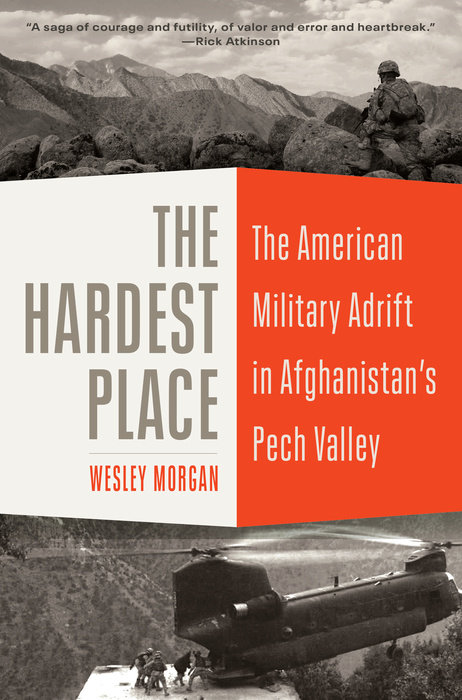