A Team of Rivals for World War II—the inside story of how FDR and the towering personalities around him waged war in the corridors of Washington, D.C., to secure ultimate victory on the battlefields of Europe and the Pacific.

The Washington War is the story of how the Second World War was fought and won in the capital’s halls of power—and how the United States, which in December 1941 had a nominal army and a decimated naval fleet, was able in only thirty months to fling huge forces onto the European continent and shortly thereafter shatter Imperial Japan’s Pacific strongholds.

Three quarters of a century after the overwhelming defeat of the totalitarian Axis forces, the terrifying, razor-thin calculus on which so many critical decisions turned has been forgotten—but had any of these debates gone the other way, the outcome of the war could have been far different: The army in August 1941, about to be disbanded, saved by a single vote. Production plans that would have delayed adequate war matériel for years after Pearl Harbor, circumvented by one uncompromising man’s courage and drive. The delicate ballet that precluded a separate peace between Stalin and Hitler. The almost-adopted strategy to stage D-Day at a fatally different time and place. It was all a breathtakingly close-run thing, again and again.

Renowned historian James Lacey takes readers behind the scenes in the cabinet rooms, the Pentagon, the Oval Office, and Hyde Park, and at the pivotal conferences—Campobello Island, Casablanca, Tehran—as these disputes raged. Here are colorful portraits of the great figures—and forgotten geniuses—of the day: New Dealers versus industrialists, political power brokers versus the generals, Churchill and the British high command versus the U.S. chiefs of staff, innovators versus entrenched bureaucrats . . . with the master manipulator, Franklin Delano Roosevelt, at the center, setting his brawling patriots one against the other and promoting and capitalizing on the furious turf wars.

Based on years of research and extensive, previously untapped archival resources, The Washington War is the first integrated, comprehensive chronicle of how all these elements—and towering personalities—clashed and ultimately coalesced at each vital turning point, the definitive account of Washington at real war and the titanic political and bureaucratic infighting that miraculously led to final victory.

An excerpt from The Washington War

In late September 1938, the world stood on the precipice of war. Japanese armies were on the march in China, and a revanchist Germany had set itself on a path aimed at overthrowing the World War I peace settlement, if need be by force of arms, and was engaged in a game of diplomatic brinkmanship with Britain and France over the fate of Czechoslovakia. When, at the last moment, Britain and France infamously blinked and handed the Sudetenland over to the Third Reich in exchange for Hitler’s promise of European peace, an ebullient Neville Chamberlain, British prime minister, returned from the Munich Conference to the cheers of a rapturous public. It was left to Winston Churchill to throw water on the celebration, commenting, “The government had a choice between shame and war. It chose shame; it will get war.”

On the other side of the Atlantic, President Franklin Roo­sevelt, like Churchill, was acutely aware that another European conflict was looming, and that America needed to start preparing for war. This was a complete reversal from the early days of Roo­sevelt’s presidency when he planned draconian reductions to the Army’s budget. The distraught Army chief of staff at the time, Douglas MacArthur, had bitterly opposed the cuts, later recounting that he had shouted at the president that “when we lost the next war, and an American boy, lying in the mud with an enemy bayonet through his belly and an enemy foot on his dying throat, spat out his last curse, I wanted the name not to be MacArthur, but Roo­sevelt.” A livid Roo­sevelt icily replied: “You must not talk that way to the President.” The exchange likely saved the Army from complete ruin, but the budget axe could not be avoided entirely during the Great Depression, when FDR had more pressing domestic uses for those funds.

Years of neglect had left the U.S. Army little more than an underfunded constabulary force. As the Munich Conference drew to a conclusion, Roo­sevelt knew it was past time to rehabilitate American military power; he was already wondering if it was too late. His instincts, as always, were to move rapidly upon his objective and seize the commanding ground before his opponents could mobilize to beat him. But he was leading a nation still mired in the Great Depression and a people who passionately believed that Europe’s problems were not their concern. Roo­sevelt, always acutely attuned to the voter’s psyche, understood that if he was going to move America toward war it needed to be done gradually and with a great deal of subterfuge. Later he would explain to his son James why he had lied to the American people about the likelihood of America entering the war: “I could not come out and say a war was coming, because the people would have panicked and turned from me. I had to educate the people to the inevitable, gradually, step-by-step, laying the groundwork for the programs which would allow us to prepare for the war that was drawing us into it.”

Although most Americans fervently believed that Great Britain had led them into the First World War through trickery and propaganda, the British did not stand alone in the docket. Americans also held industrialists and bankers, whom they perceived as having reinforced British manipulations, just as guilty. In September 1934, only a few months after MacArthur’s run-in with the president, North Dakota senator Gerald Nye stood before the Senate to condemn the banking and munitions industries as “merchants of death” motivated only by greed, who had pressured President Woodrow Wilson into entering the Great War. A steady diet of such innuendo and lies sparked a surge of isolationism and overwhelming public support for a series of neutrality laws, the first passed in 1935, that made it illegal for the United States to trade with “any” warring power, ostensibly to keep America from being dragged into the next European conflict.

But there were a few men, close to the president, who saw the threat posed by Hitler as clearly as Roo­sevelt did. Over time, this group would grow and coalesce into an internal government pressure group—tagged by the press as the “all-outers”—who increasingly prodded and coaxed Roo­sevelt to do more to help the Allied cause and to prepare the nation for war. One of the first of this group, Secretary of State Cordell Hull, managed to convince the president to risk getting ahead of public opinion and take a tentative first step toward breaking free of the Neutrality Acts by making a speech on the need for international cooperation. Moreover, he persuaded FDR to make the speech in a large city firmly entrenched in isolationism: Chicago. A year before the Munich Conference, on October 5, 1937, Roo­sevelt told a large crowd, “The present reign of terror and international lawlessness . . . has reached a stage where the very foundations of civilization are seriously threatened.” He then asked for the peaceful nations of the world to unite to “quarantine” the aggressors.

The reaction to what was quickly branded Roo­sevelt’s “Quarantine Speech” had been immediate and violent. Every major pacifist organization—and in 1937 there were already a great number of them—attacked what they all perceived as a first step toward war. Leading the outcry were the vehemently anti-Roo­sevelt Hearst and McCormick newspaper chains. But before the week was out, even the Veterans of Foreign Wars had launched a petition drive with the goal of collecting twenty-five million signatures to “Keep America Out of War.” Stunned by the speed and virulence of the public reaction, Roo­sevelt pulled back from his comments. In a press conference a couple of days later he dodged the issue by stating that he was not advocating any set program or policy. Rather he was trying to set an attitude.

Sumner Welles, the number two man in the State Department and a close Roo­sevelt intimate, described the president as “dismayed by the widespread violence of the attacks.” Welles’s impression likely did not reflect Roo­sevelt’s deeper thoughts. Such attacks rarely dimmed Roo­sevelt’s essential optimism for long, as was apparent a few days later when he told Secretary of the Interior Harold Ickes—who also functioned as his political attack dog—“I frankly thought there would be more criticism and I verily believe that . . . we can slowly but surely make people believe that war is a greater danger to us if we close all of our doors and windows.” Nor did he seem much concerned with the continuing attacks of the isolationist press, writing to Welles, “Frankly I do not believe any of these newspapers carry any particular weight as expressions of public opinion.”

Roo­sevelt was a master of an attack-and-retreat style of politics, adept at first offering a new initiative, gauging the resistance, then temporarily withdrawing to formulate the best way forward. Although he clearly pulled back from taking any substantive action after the speech, this was part of a pattern Roo­sevelt would repeat many times over the next two years. After each such retreat, he would sit patiently, waiting for another opportunity—always sure one would come—to make his next provocative statement. Even when polls demonstrated clear majorities supporting his position, Roo­sevelt continued to move cautiously, waiting weeks or months before once again pushing his agenda forward. As war edged closer these tactics drove the growing number of “all-outers” in his government to distraction, but Roo­sevelt recognized that public support was much wider than it was deep. He was clearly playing a long game, while he waited for America to conclude what he already knew: war was coming.

James Lacey is the author most recently of The Washington War: FDR’s Inner Circle and the Politics of Power That Won World War II and The First Clash: The Miraculous Greek Victory at Marathon and Its Impact on Western Civilization, as well as co-author with Williamson Murray of Moment of Battle: The Twenty Clashes That Changed the World. He is a widely published defense analyst who has written extensively on the war in Iraq and the global war on terrorism. He served more than a dozen years on active duty as an infantry officer. Lacey traveled with the 101st Airborne Division during the Iraq invasion as an embedded journalist for Time magazine, and his work has also appeared in National Review, Foreign Affairs, the Journal of Military History, and many other publications. He currently teaches at the Marine Corps War College and lives in Virginia. 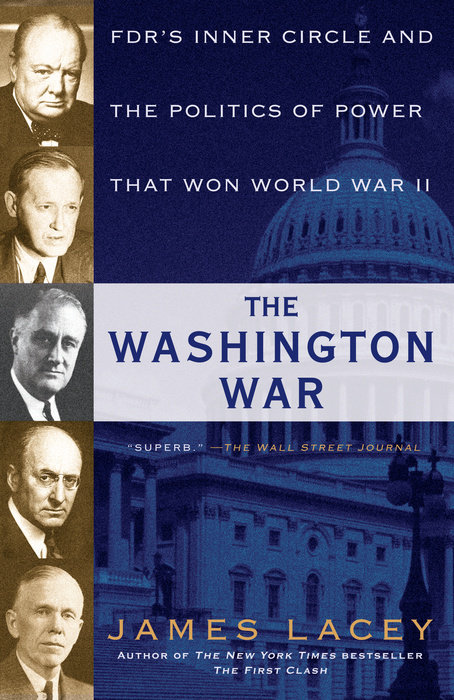