Tales of Life in the Counterculture

The founder of Utne Reader chronicles his adventures on the frontlines of American culture—from the Vietnam era to the age of Trump—as a spiritual seeker, antiwar activist, and minor media celebrity.

“Fascinating . . . a remarkable piece of social history.”—Bill McKibben, author of Falter: Has the Human Game Begun to Play Itself Out?

Far Out Man is the story of a life-long seeker who was occasionally a finder as well. In 1984, Eric Utne founded Utne Reader, a digest of new ideas and fresh perspectives percolating in the arts, culture, politics, business, and spirituality. With the tag line “The Best of the Alternative Press,” the magazine was twice a finalist for a National Magazine Award and grew to more than 300,000 paid circulation. In the nineties, the magazine promoted the Neighborhood Salon Association to revive the endangered art of conversation and start a revolution in people’s living rooms. More than 18,000 people joined, comprising nearly 500 salons across North America. Utne devoted the magazine to bringing people together to help make the world a “little greener and a little kinder.”

Far Out Man serves as a chronicle of both an individual life and a generation, covering the conflicts of the Vietnam era, the hopes and excesses of the sexual revolution and the Me Decade, the idealism and depredations of the entrepreneurial eighties and nineties, and the promise and perils of the digital age. Ultimately, Far Out Man is the story of Eric Utne’s lifelong search for hope, how he lost it, and what he found on the other side that sustains him in his darkest moments. It is a book dedicated to helping all seekers become finders.

An excerpt from Far Out Man

All You Need Is Love

I was born on August 6, 1946, the first anniversary of the dropping of the atomic bomb on Hiroshima. The Bomb detonated the Baby Boom, the largest and most privileged of American generations. I grew up in an era of unprecedented affluence and security made possible by America’s unprecedented economic and military might. Our privilege and safety were products of things we could not see, or chose not to.

Every year, when the new car models came out, my parents assembled our family for a photo in the driveway of our suburban ranch home, one of about fifty houses on Ridgewood Lane, all of them built just after World War II. We gathered in front of our new Buick station wagon. My older brother, Bob, younger brother, Tom, and baby sister, Mary, and I, along with our parents, all beamed for the camera. We looked like a happy, successful, all-American family. We were well-dressed, well-scrubbed, and healthy. We had a three-bedroom ranch house with attached garage, memberships in St. Michael’s Lutheran Church, the St. Paul Athletic Club, and the Town & Country Golf Club. We recorded family holidays on reel-to-reel audiotape and said grace over dinner and our prayers at bedtime. We were living the post-war American Dream.

Our neighbors did the same. Everyone smiled and said nice things. They all appeared to be happy tending their new homes along the lanes and cul-de-sacs of suburbia.

Our home was in Roseville, Minnesota, a suburb of Minneapolis and Saint Paul, located exactly halfway between the equator and the North Pole. A boulder with a plaque marking the forty-fifth parallel sits not far from our front door. The terrain in this part of the world is called oak savanna—broad expanses of rolling grassland and teeming wetlands, flecked with wildflowers, ribboned with meandering rivers and streams, and studded with clusters of oak, birch, and maple. It’s an “in between” zone, a liminal space between the moist broadleaf forests of the eastern United States, which end in Minnesota, and the drier great prairies of the west, which begin here.

Water comes right up out of the ground in most parts of Minnesota. Springs flow into creeks that converge into streams that grow into mighty rivers. The state is the headwaters of North America, the source of rivers that flow in three directions to three separate oceans. The place where the state’s two largest rivers, the Mississippi and the Minnesota, come together is known to the indigenous Dakota Indians as Bdote. Some Dakota consider it the center of the universe, the place where the first humans emerged from their underwater realm.

In one of my earliest memories I’m standing alone in our front yard. It’s a soft midsummer evening. The sun has just set and everything glows in the shadowless twilight. Surveying my realm, I raise my arms high, hands splayed up and out, and declare out loud, “I’m Rickey Utne. I’m seven years old. And I’m ALIVE!”

My friends and I spent every moment we could on, in, and around the swamp that lay beside our neighborhood. This was where we floated on our makeshift raft, setting off through cattails and milkweed to cross what we called “the Western Sea.” The swamp was where we caught and released painted turtles and garter snakes, dodged fluty red-winged blackbirds, plugged our noses when the green algae turned fetid in the dog days of August, built tree forts and sank knee-deep in the gooey black mud. We told each other to watch out for drop-offs and quicksand. One false step and we might disappear forever. We gazed into those dark waters and glimpsed the mysterious underworld that lay just beneath the surface of our lives.

One hot August day when I was ten years old Butch Seymour made a butterfly net. Soon all the kids made butterfly nets. As if on cue, a massive migration of monarch butterflies descended on our neighborhood. Thousands of shimmering orange and black mariposas alighted on our three backyard apple trees. We screamed and howled as we ran from tree to tree, swinging wildly. I must have caught a dozen butterflies with a single swipe.

A few weeks later, a gigantic swarm of green darner dragonflies filled the sky in every direction as high as the clouds. Unlike the regal, silent monarchs, this zigzagging horde made a loud droning buzz—like fast-moving, now-hovering, now-darting, four-winged berserkers.

My bedroom was in the basement, and the only light came in through what we called a window well, which looked like a backlit terrarium at ceiling level. One day my friend Jeff and I were playing in my room when we thought we noticed something moving in the sand of the window well, so we went outside to investigate. That was when I met my first salamander. There must have been four or five of them. We were both excited and scared, and we dared each other to pick one up. I went first, digging my fingers into the cool sand. The little dragons with their darting tongues and smooth skin moved slowly and were easy to catch.

But, of course, these salamanders were out of place. Their home was under attack. They were refugees escaping from the giant dump trucks and the earth grader that had come to fill in our swamp, covering it with truckload after truckload of gravel and dirt until it simply wasn’t there anymore.

Later that day, around sundown Jeff and I went to the construction site. We were noble knights. Our duty was to defend the realm. The earth grader, with its fiery, smoke-belching exhaust pipe rising above the cab, was an invading dragon. We threw mud balls into the dragon’s black maw until it was filled to the top. We rode home on our steeds, our deed accomplished.

The next morning I was in my classroom at summer Bible camp when the police arrived, lights flashing. Everyone looked out the window, excited to see what had happened. But the policemen came to our classroom door. They said they were looking for Rickey Utne and Jeff Hilger. We were apprehended like criminals and put into the back of the squad car. I was sure we were going to jail, but they drove instead to my house. As soon as we pulled up, my mother came outside, obviously expecting us. She led me by the proverbial ear into the house before what seemed like a throng of gawking neighbors. I was humiliated. Mom made me write “I will never destroy other people’s property” a hundred times. But the lesson didn’t take. That may have been my first act of protest against the status quo that so mindlessly kills life. Or, to be more accurate, my first attempt to let my life be a “counter friction to stop the Machine,” as Henry David Thoreau put it in his essay on civil disobedience. For better or worse, it wouldn’t be my last.

By the time I was twelve years old, I thought most humans lived the way my family did, or if they lived differently than us, that we had it better somehow, and we deserved it. We were Americans, after all. We had all the modern conveniences, we believed in progress, we were living the American dream. I didn’t know then what I was missing. But I do now.

I was on the baseball team, participated in Boy Scouts, and attended church catechism classes. But the adults leading those activities were just like my parents; they had other priorities—their jobs, their parties, cigarettes and highballs, each other. They wanted to enjoy the postwar perquisites they felt they’d earned. We kids were mostly left to roam our suburban environs on our own. At best, that meant we could discover the world for ourselves, and, at worst, it meant that no one was paying any attention to us, let alone passing down any real wisdom about how to live. Thus began my unease with the American dream.

The Age of the Machine, aka the industrial age, began in the late eighteenth and early nineteenth centuries. William Blake called the Machine “the Beast,” and D. H. Lawrence called it “the insentient iron world . . . ​the Mammon of mechanized greed,” declaring it “ready to destroy whatever did not conform.” The Machine is anti-life.

By the mid-twentieth century, with the dropping of atomic bombs on Hiroshima and Nagasaki, the techno-industrial edition of the machine age had kicked into high gear. That’s when nuclear power plants began to proliferate. The interstate highway system sprawled across the continent, gobbling up entire urban neighborhoods and replacing fertile farmland with suburban developments and “junkspace.” Public education was made universal and compulsory. Petrochemicals fueled the generation of energy and the production of food. Plastics and antibiotics became central to our agriculture and healthcare systems. Carbon dioxide filled the atmosphere and began to melt the permafrost in the Far North and glaciers worldwide. Sea levels rose, forests declined, and deserts expanded. Global mass extinction of species at unprecedented levels would soon follow.

Eric Utne, founder of the eponymous Utne Reader, is a journalist, publisher, and social entrepreneur. His name has been a New York Times crossword puzzle answer more than seventy times since 1994. Prior to starting Utne Reader, Utne managed a natural foods store, studied acupuncture and Chinese medicine, and was a literary agent and small business consultant. After leaving the magazine in 2000, he became the seventh-grade class teacher in an inner-city Waldorf school. In 2006, he was elected to the executive committee of the Nobel Peace Prize Forum. He is a senior fellow at the University of Minnesota’s Center for Spirituality and Healing, where he co-authored a series of courses on the social and environmental dimensions of health and well-being. Utne earned a bachelor’s degree in environmental design from the University of Minnesota. He is the father of four and grandfather of five, and makes his home in St. Paul, Minnesota.

Tales of Life in the Counterculture 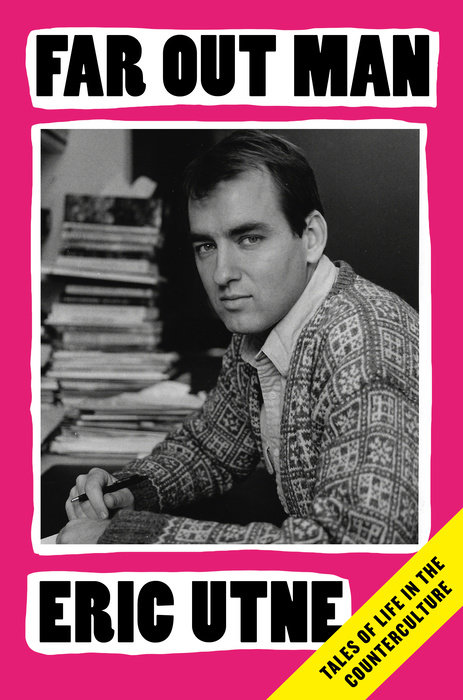