A novel both timely and prophetic, Ernest Callenbach’s Ecotopia is a hopeful antidote to the environmental concerns of today, set in an ecologically sound future society. Hailed by the Los Angeles Times as the “newest name after Wells, Verne, Huxley, and Orwell,” Callenbach offers a visionary blueprint for the survival of our planet . . . and our future.

Ecotopia was founded when northern California, Oregon, and Washington seceded from the Union to create a “stable-state” ecosystem: the perfect balance between human beings and the environment. Now, twenty years later, this isolated, mysterious nation is welcoming its first officially sanctioned American visitor: New York Times-Post reporter Will Weston.

Skeptical yet curious about this green new world, Weston is determined to report his findings objectively. But from the start, he’s alternately impressed and unsettled by the laws governing Ecotopia’s earth-friendly agenda: energy-efficient “mini-cities” to eliminate urban sprawl, zero-tolerance pollution control, tree worship, ritual war games, and a woman-dominated government that has instituted such peaceful revolutions as the twenty-hour workweek and employee ownership of farms and businesses. His old beliefs challenged, his cynicism replaced by hope, Weston meets a sexually forthright Ecotopian woman and undertakes a relationship whose intensity will lead him to a critical choice between two worlds.

An excerpt from Ecotopia

(May 3) Here we go again, dear diary. A fresh notebook with all those blank pages waiting to be filled. Good to be on the way at last. Alleghenies already receding behind us like pale green ripples on an algae-covered pond. Thinking back to the actual beginnings of this trip–almost a year ago? Those careful hints dropped at the White House like crumbs for the President’s vacuum-cleaner mind to suck up. Until finally they coalesced into some kind of ball and came out as his own daring idea: okay, send some unofficial figure out there, purely informal–a reporter not to closely identified with the administration, who could nose around, blow up a few pretty trial balloons–can’t hurt! A tingly moment when he finally broached it, after a big Brazil briefing session. That famous confidential smile! And then saying that he had a little adventure in mind, wanted to discuss it with me privately. . . .

Was his tentativeness only his habitual caution, or a signal that if anything went wrong the visit (and the visitor) were politically expendable?

Still, an important opening in our foreign policy–lots of weighty arguments for it. Heal the fratricidal breach that rent the nation–so the continent can stand united against rising tides of starvation and revolution. Hawks who want to retake “lost last of the west” by force seem to be growing stronger–need neutralizing. Ecotopian ideas are seeping over the border more dangerously–can’t be ignored any longer, might be detoxified by exposure. Etc.

Maybe we can find a hearing for proposal to reopen diplomatic relations; perhaps trade proposals too. With reunification a gleam in the eye. Even just a publicizable chat with Vera Allwen could be useful–the President, with his customary flexibility, could use it to fend off both hawks and subversives. Besides, as I told Francine–who scoffed, naturally, even after three brandies–I want to see Ecotopia because it’s there. Can things really be as weird there as they sound? I wonder.

Have been mulling over the no-nos. Must stay clear of the secession itself: too much bitterness could still be aroused. But fascinating stories there, probably–how the secessionists filched uranium fuel from power plants for the nuclear mines they claimed to have set in New York and Washington. How their political organization, led by those damned women, managed to paralyze and then supplant the regular political structure, and got control of the armories and the Guard. How they bluffed their way to a stand-off–helped, of course, by the severity of the national economic crisis that struck so conveniently for them. Lots of history there to be told someday–but now is not the time. . . .

Getting harder to say goodbye to the kids when I take off on a long trip. Not that it’s really such a big deal, since I sometimes miss a couple of weekends even when I’m around. But my being away so much seems to be beginning to bother them. Pat may be putting them up to it; I’ll have to talk to her about that. Where else would Fay get the idea of asking to come along? Jesus–into darkest Ecotopia with typewriter and eight-year-old daughter. . . .

No more Francine for six weeks. It’s always refreshing to get away for a while, and she’ll be there when I get back, all charged up by some adventure or other. Actually sort of exciting to think of being totally out of touch with her, with the editorial office, in fact with the whole country. No phone service, wire service indirect: uncanny isolation the Ecotopians have insisted on for 20 years! And in Peking, Bantustan, Brazil there always had to be an American interpreter, who couldn’t help dangling ties from home. This time there’ll be nobody to share little American reactions with.

And it is potentially rather dangerous. These Ecotopians are certainly hotheads, and I could easily get into serious trouble. Government’s control over population seems to be primitive compared to ours. Americans are heartily hated. In a jam the Ecotopian police might be no help at all–in fact they apparently aren’t even armed.

Well, ought to draft the first column. Mid-air perhaps not the worst place to begin.


WILLIAM WESTON ON
HIS JOURNEY TO ECOTOPIA


On board TWA flight 38, New York to Reno, May 3. As I begin this assignment, my jet heads west to Reno–last American city before the forbidding Sierra Nevada mountains that guard the closed borders of Ecotopia.

The passage of tiem has softened the shock of Ecotopia’s separation from the United States. And Ecotopia’s example, it is now clear, was not as novel as it seemed at the time. Biafra had attempted secession from Nigeria but failed. Bangladesh had successfully broken free of Pakistan. Belgium had in effect dissolved into three countries. Even the Soviet Union has had its separatist “minority” disturbances. Ecotopia’s secession was partly modeled on that of Quebec from Canada. Such “devolution” has become a worldwide tendency. The sole important counterdevelopment we can point to is the union of the Scandinavian countries–which perhaps only proves the rule, since the Scandinavians were virtually one people culturally in any event.

Nonetheless, many Americans still remember the terrible shortages of fruit, lettuce, wine, cotton, paper, lumber, and other western products which followed the breakaway of what had been Washington, Oregon, and Northern California. These problems exacerbated the general U.S. economic depression of the period, speeded up our chronic inflation, and caused widespread dissatisfaction with government policies. Moreover, Ecotopia still poses a nagging challenge to the underlying national philosophy of America: ever-continuing progress, the fruits of industrialization for all, a rising Gross National Product.

During the past two decades, we as a people have mostly tried to ignore what has been happening in Ecotopia–in the hope it will prove to be mere foolishness and go away. It is clear by now, however, that Ecotopia is not going to collapse as many American analysts at first predicted. The time has come when we must get a clearer understanding of Ecotopia.

If its social experimentation turns out to be absurd and irresponsible, it will then no longer tempt impressionable young Americans. If its strange customs indeed prove as barbaric as rumors suggest, Ecotopia will have to pay the cost in outraged world opinion. If Ecotopian claims are false, American policy-makers can profit from knowledge of that fact. For instance, we need to access the allegation that Ecotopia has no more deaths from air and chemical pollution. Our own death rate has declined from a peak of 75,000 annually to 30,000–still a tragic toll, but suggesting that measures of the severity adopted in Ecotopia are hardly necessary. In short, we should meet the Ecotopian challenge on the basis of sound knowledge rather than ignorance and third-hand reports.

My assignment during the next six weeks, therefore, is to explore Ecotopian life from top to bottom–to search out the realities behind the rumors, to describe in concrete detail how Ecotopian society actually operates, to document its problems and, where that is called for, to acknowledge its achievements. By direct knowledge of the situation in which our former fellow-citizens now find themselves, we may even begin to rebuild the ties that once bound them to the Union they so hastily rejected.


(May 3) Reno a sad shadow of its former goodtimes self. With the lucrative California gambling trade cut off by secession, the city quickly decayed. The fancy casino hotels are now mere flophouses–their owners long ago fled to Las Vegas. I walked the streets near the airline terminal, asking people what they thought of Ecotopia out here. Most replies noncommittal, though I thought I could sometimes detect a tinge of bitterness. “Live and let live,” said one grizzled old man, “if you can call what they do over there living.” A young man who claimed to be a cowboy smiled at my question. “Waaal,” he said, “I know guys who say they’ve gone over there to get girls. It isn’t really dangerous if you know the mountain passes. They’re friendly all right, so long as you aren’t up to anything. Know what, though? The girls all have guns! That’s what they say. That could shake you up, couldn’t it?”

Had a hard time finding a taxi driver willing to take me over the border. Finally persuaded one who looked as if he had just done 20 years in the pen. Had to promise not only double fare but 25 percent tip besides. For which I got a bonus of dirty looks and a string of reassuring remarks: “What ya wanta go in there for anyhow, ya some kind of a nut? Buncha goddamn cannibals in there! Ya’ll never get out alive–I just hope I will.”

Ernest Callenbach is also the author of Ecotopia Emerging, The Ecotopian Encyclopedia, and Publisher’s Lunch. He is the co-author of The Art of Friendship and Humphrey the Wayward Whale (with Christine Leefeldt) and of A Citizen Legislature (with Michael Phillips). He edits natural history books and the journal Film Quarterly at the University of California Press, and lectures on environmental topics all over the world. 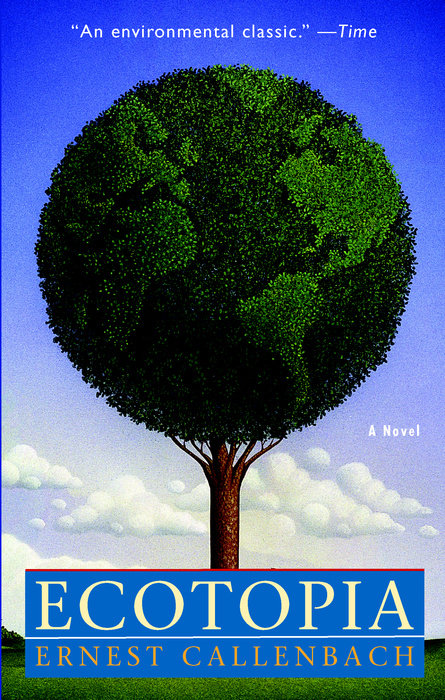