When Ray Simon receives a desperate call from his childhood friend Kevin, begging him to come visit, Ray can’t say no. Kevin promises to clue him in on shocking discoveries he has made about weird, half-forgotten events in their past—events associated with a summer camp near Kevin’s home in the small town of Blackwater, West Virginia.

But when Ray arrives, Kevin is nowhere to be found. So Ray does some investigating of his own, only to find that no records exist of the camp. Yet he is not alone in looking for information. There are Lily, a beautiful redhead with uncanny seductive powers; Crawford, a wealthy collector of art and people; and Micah, the mysterious leader of the Church of the Open Door. All of them are seeking information about the rumored camp. And they are all interested—very interested—in Ray.

Then a midnight encounter with strange floating lights sparks a return of old memories—vivid but fractured images that haunt Ray’s waking hours with intimations of terror and cruelty. Something dreadful happened at that camp long ago. Something was awakened there. Now, with the help of his new friend Ellen, a waitress at the local diner, Ray must navigate a path through madness and murder—a path that leads inexorably to an all-but-forgotten night in his childhood . . . and to a future of unimaginable horror.

“Michael M. Hughes’s highly intelligent debut novel, Blackwater Lights, weaves a stunning tale of intrigue, ritual, and dark magic. It’s brilliantly paced and beautifully written, and once the journey has begun, it’s impossible to put down. Luckily for those of us hooked on Hughes, Blackwater Lights is but the first work in his forthcoming trilogy.”—Lisa Mannetti, Bram Stoker Award–winning author of The Gentling Box

“Disturbing, surreal, and spooky as hell, Blackwater Lights is a brilliantly written debut, marking Michael M. Hughes as a talent to watch.”—Tim Lebbon, author of Coldbrook and the Toxic City trilogy

“Blackwater Lights is a paranoid thrill-ride that deftly combines mystery, sci-fi, and horror elements into a modern-day conspiracy tale. An impressive debut that builds to a satisfying, action-filled conclusion.”—Cemetery Dance magazine

“Blackwater Lights has action, adventure, sex, love, designer drugs, and violent death, all woven into a globe-spanning paranormal conspiracy. I mean, really, what’s not to like? Consider this my official request for a sequel.”—F. Paul Wilson, author of the Repairman Jack novels and The Adversary Cycle

“A harrowing and riveting thrill ride. Hughes is a welcome addition to the dark-fiction ranks.”—Scott Nicholson, author of The Red Church

An excerpt from Blackwater Lights

The phone call came late on a Saturday night. Ray had just turned off the TV and was heading to bed. No one called this late, not even on a weekend.

“I need to see you,” Kevin said. It had been months since they’d spoken, but he dispensed of all formalities. They’d been friends since they were kids, having grown up on the same suburban street, and Ray knew immediately, the way old friends pick up on such things, that Kevin was more than a little upset.

Ray tried to calm him down. “Easy, easy. What’s going on?”

Ray’s throat tightened. He felt poised on a tightrope, as if the world on both sides of him had disappeared, dropping into darkness. “It is? All of it?”

“Yes.” Kevin’s voice faltered. “The dreams. Worse than ever. The wake-ups, the doctors, the machines—all of it.

Almost every night for weeks now. I feel like I’m going to crack. Just like when we first got home from camp.”

Ray remembered those childhood nightmares all too well. “God. I’m sorry. Are you all right?”

“I can’t talk about it on the phone. You need to see it for yourself. It validates everything. It proves it. We weren’t crazy.”

Ray wiped his brow. He was sweating, despite the gooseflesh on his arms. “All right. But I can’t just jump in my car right now—”

“You need to. This is big, man. You need to get your ass here. Stay the weekend. Take a week off. Make it a little vacation. School’s out, right? Aren’t you on summer vacation?”

“Yeah.” He didn’t start teaching his summer classes for another two weeks. “But I have to straighten up my office before they wax the floors. The vice principal will be on my ass if I don’t.”

“Listen, I need you. You’re the only other person who understands. I can’t talk to anyone but you and I need to talk about this.” His voice caught. “Please. I’m really close to losing it, man. It’s too much for me to deal with by myself. Please. ”

Ray massaged the bridge of his nose and sighed, “All right. I’ll leave tomorrow afternoon. How long will the drive take?”

“Thanks,” Kevin said. “You’ll understand when you see it. I promise.”

Ray hated the mountain roads. The trees were too close, the curves too sharp, and the hills pushed his Corolla’s engine to its limits. He’d driven for almost six hours when the sign for Blackwater appeared around a curve. Next to the sign lay a bloated deer, its stiff legs pointing toward the exit, a thick cloud of flies swirling around it. He rolled up the window and covered his nose with his hand as he drove by it, but the stench of summertime roadkill still made him gag.

You need to see something, Kevin had said. Something that proved they weren’t crazy or suffering from a delusional artifact of childhood imagination, but that the dreams and the rest of it were real. Validation. Maybe even an explanation.

A cicada smacked into the windshield. He squirted a pale stream of washer fluid onto the glass and the wipers smeared the guts in a yellow arc. He could have blamed his rapid heartbeat on the nerve-wracking drive, or the crappy fast food coffee, but he knew it was more than that. Because the previous night, for the first time in years, he’d had the dream again, too.

He was stuck at a light in front of the Blackwater High School parking lot. A marching band had begun to snake out onto the road in front of him. Antique cars, costumed kids, marching bands, and a line of bright parade floats. A young cop, bored and aggravated, stood in front of Ray’s car.

A black Cadillac convertible turned in front of him. A magnetic sign on the side of the car read CHURCH OF THE OPEN DOOR and below it, in smaller type, ALL ARE WELCOME IN JESUS CHRIST OUR SAVIOR. A wooden cross was propped in the back seat, hanging out of the back of the vehicle and casting a long shadow on the street. A black man, in his sixties or seventies and dressed in an out-of-style white suit, sat in the passenger seat.
The older man’s skin was deep brown, nearly black, his face pockmarked and trenched with wrinkles, his nose wide and flat. His hands rested on a cane propped between his knees. A preacher, maybe even from one of the snake handler churches Kevin had spoken about, where the congregants took up serpents and drank poison and spoke in tongues.

Their eyes met. The preacher smiled. He had a large gap between his front two teeth. And those eyes—something was different about them. They were curious. Looking at Ray almost as if he knew him. It felt like recognition.

The Cadillac passed, and the connection broke. Ray shook his head. Okay, that was weird.

Kevin’s house was hidden on the outskirts of town, at the end of a several miles of dirt road that wound up and down hills deep into the woods. Ray slowed the car as the house appeared in the clearing. Very impressive. Kevin had shipped the prefab from Portland, a limited-series, eco-friendly design from a famous architect whose name Ray could never remember, and he’d plopped it far away from any other human beings. An enormous satellite dish pointed at a patch of sky overhead. Old towering trees dwarfed the dwelling and thick patches of rhododendron, lush with summer growth, seemed to be reaching out to claim it.

An envelope was taped to the inside of the screen door.

Ray—had to leave. Emergency. Hang tight. Back as soon as possible. Make yourself at home.

Inside the envelope was a key.

The interior was even more disordered than he had imagined: bookshelves overflowing and surrounded by piles of unshelved paperbacks and magazines, retro science fiction posters and sea-creature-like glass objets d’art, and bathroom wallpaper made out of 80s Playboy covers. The office, the only windowless room, looked like the bridge of a dilapidated spaceship, a mass of hard drives, electronic assemblies, wires, hefty computer manuals, and enormous flat monitors. The home of a brilliant eccentric with a lot of money and exceedingly odd taste.

Pornography and a precocious talent with computer programming had made it all possible. Seemingly overnight, in the blooming days of the Internet, Kevin created a prototype business model and software for streaming porn. A year after he’d started his basement business he’d decamped Baltimore and moved into a high-tech business park in Portland, joining the millionaire club by the time he turned thirty-six. His latest project was SeXplanet, a social media service for finding sexual partners. Ray didn’t get it—he had never been into internet socializing—but SeXplanet had become an instant success. Kevin had been hailed as “Hefner Rebooted” in a Wired cover story.

Ray’s stomach rumbled, empty and acidic from the lousy coffee. He opened the fridge. Freezer-burned burger patties, buns, and crusty jars of condiments. Some containers of unidentifiable carryout food. A few bottled microbrews from the West Coast. That settled it. Dining out was his only choice.

Time to see what this town was all about.

Michael M. Hughes lives in Baltimore with his wife and two daughters. He writes fiction and nonfiction. When he’s not writing, Hughes speaks on Forteana, the paranormal, psychedelia, pop culture, and other topics, and teaches regular workshops on magic and the tarot. 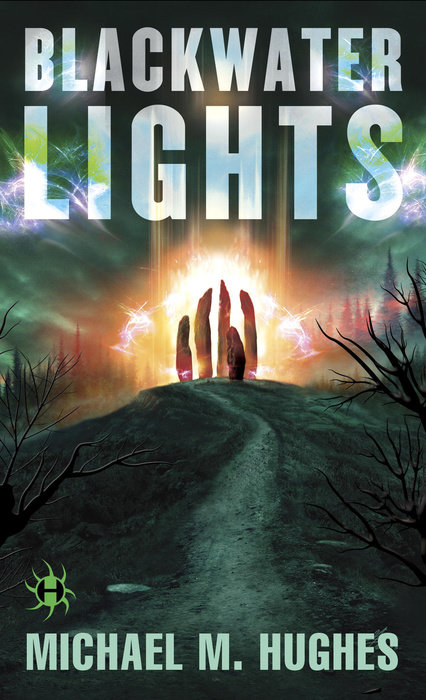