A shocking crime triggers a media firestorm for a controversial talk show host in this provocative novel—a story of redemption, a nostalgic portrait of New York City, and a searing indictment of our culture of spectacle.

One of the The New York Times’s “10 Books to Watch for in April” • “Jennifer duBois is a brilliant writer.”—Karen Russell, author of Vampires in the Lemon Grove

Talk show host Matthew Miller has made his fame by shining a spotlight on the most unlikely and bizarre secrets of society, exposing them on live television in front of millions of gawking viewers. However, the man behind The Mattie M Show remains a mystery—both to his enormous audience and to those who work alongside him every day. But when the high school students responsible for a mass shooting are found to be devoted fans, Mattie is thrust into the glare of public scrutiny, seen as the wry, detached herald of a culture going downhill and going way too far. Soon, the secrets of Mattie’s past as a brilliant young politician in a crime-ridden New York City begin to push their way to the surface.

In her most daring and multidimensional novel yet, Jennifer duBois vividly portrays  the heyday of gay liberation in the seventies and the grip of the AIDS crisis in the eighties, alongside a backstage view of nineties television in an age of moral panic. DuBois explores an enigmatic man’s downfall through the perspectives of two spectators—Cel, Mattie’s skeptical publicist, and Semi, the disillusioned lover from his past.

With wit, heart, and crackling intelligence, The Spectators examines the human capacity for reinvention—and forces us to ask ourselves what we choose to look at, and why.

Praise for The Spectators

With The Spectators, duBois is staking out larger literary territory. The new novel is full of small pleasures that accumulate as proof that this writer knows her stuff. . . . DuBois’s mastery of . . . details earns our trust as she expands The Spectators into a billowing meditation on the responsibility of public figures to contribute something worthwhile to the culture. Although her book takes place decades ago, duBois’s message has a contemporary urgency as well.”—The New York Times

“Heart-rending and visceral . . . DuBois’s language is dexterous, and her pacing impressive. . . . The Spectators is a treatise on the media’s power and a finely wrought example of intimate pain.”—USA Today

An excerpt from The Spectators

Cel is in the greenroom pre-­interviewing the devil-­boy when the first reports of the shooting come in.

The devil-­boy’s name is Ezra Rosenzweig, though Cel has been told to address him only as Damian. He has a black odalisque neck tattoo and thumb-­sized subdermal horn implants; Cel keeps expecting these to twitch expressively, somehow, like the ears of a small dog. But the devil-­boy’s horns do not move, and alongside his shaved eyebrows they contribute to an expression of general impassivity, so Cel doesn’t quite register the extent of his surprise when he stops speaking of Satanic baptismal rites and says, “Oh, shit.”

Cel follows his gaze to the television, turned to a perpetually mute CNN. On the screen is a crimson-­blazered anchorwoman with melancholic eyes. Below her, a breaking news chyron declares that a shooter, or possibly two, has opened fire at a high school outside Cleveland. Cel turns up the volume.

“—­High School has over fifteen hundred students enrolled,” the anchorwoman is saying. Below her, rolling text announces reports of multiple casualties. The anchor wears an expression of perfectly choreographed concern—­Cel would never have noticed the hint of relief beneath it if she didn’t work in television. “No word yet on who the shooter, or shooters, may be, but some early reports have suggested that students themselves could be involved—­”

“Awful,” says Cel, realizing that this is not the right word.

Luke appears in the door, holding a clipboard. The clipboard is with him always, whether he has need to clip anything or not.

“You saw,” he says, glancing at the television.

“We saw,” says Cel. “You remember Luke, right, Ezra? I mean. Damian.” On the screen, chopper footage is showing a bird’s-­eye view of the school: red-­bricked, flanked by skeins of dusty playing fields. “Luke is a producer here at the show.”

Luke loathes the use of indefinite articles in reference to his job.

“Hi,” says Luke, turning his head in the devil-­boy’s direction. Luke has a gift for interacting with guests as though they are not entirely there; the way he addresses them somehow suggests that their speaking back would be not just impertinent, but impossible—­as though he is a weatherman and they are a green-­screen tornado.

On the screen, the frame has extended to reveal an army of emergency vehicles: fire trucks, ambulances, police cars, local and state. Beyond the line of cars, Cel can just make out a few figures in lime-­green jackets—­EMTs, she figures, though none of them seem to be doing anything but waiting. Cel’s mouth goes dry as she thinks of what they are waiting for.

“So.” Luke lets out a low whoosh of air.

“Awful,” Cel says again, senselessly. The devil-­boy is staring not at the television but at Luke, a look of respectful, nearly sycophantic curiosity on his face. Cel sincerely hopes that Luke doesn’t see this, though she suspects that, all appearances to the contrary, he actually always sees everything.

Luke turns, his gaze scraping at the air.

“I’m going to borrow Cel for a minute, okay, pal?” Luke does not wait for the devil-­boy’s assent. “Sara here will wait with you.”

Sara Ramos, the audience coordinator, has materialized in the doorway. Cel regards her with interest—­however much she dislikes her own job, she cannot imagine the horrors of Sara’s—­then follows Luke and his clipboard into the hall. Outside, Luke tells her that Mattie wants to cancel today’s taping.

“Out of respect for the victims,” he adds after a moment. From his tone, Cel can’t tell whether he agrees with this decision or is just tired of fighting with Mattie. Either way, she knows he must be apoplectic about the timing.

“Of course.” Cel nods at the door, where the devil-­boy is waiting, unsuspecting. “So we’ll tell him—­tomorrow?”

“You don’t have to tell him anything. Jesus.” Luke runs his clipboard-­free hand through his hair. “Tell him we’ll be in touch.”

“Is Mattie on strike now, or what?”

“We just need to be very attentive to the optics.” Luke is using what Cel thinks of as his press release voice.

“Stop mentioning it. But yes.”

Cel only ever mentions it to Luke—­even she isn’t that stupid. “Secret Crush” technically refers to an entire category of shows—­the formula is exactly what it sounds like, and Mattie has done dozens—­but these days is usually used to allude to a single episode. In that show, the Secret Crush object and subject were both men—­longtime co-­workers, evidently—­and though this was not the first time that had happened, it was the first time anyone involved seemed genuinely surprised. The Crushee had stormed off the stage and, later, badly beaten his admirer in the parking lot. Cel had heard he’d suffered permanent brain damage, though she’d also heard that the whole thing was staged, a PR stunt so ill-­conceived that it was arguably better to let the world think it was an actual hate crime. Cel’s predecessor had quit and/or been fired and/or, according to some accounts, been hospitalized: the show had had to replace her in a hurry that bordered on derangement, which is how they’d wound up with Cel.

“I suppose that makes sense,” she says now. It does, from the standpoint of public relations—­which is, she has to keep reminding herself, her job, her job, somehow her job. But what really makes sense is that behind Mattie’s stated reason for canceling is another reason, and that this reason is cynical and self-­serving. One of Mattie’s many areas of genius is his ability to maintain a perfect streak of Cel’s abysmally low regard.

Jennifer duBois is the author of A Partial History of Lost Causes, a finalist for the PEN/Hemingway Award for Debut Fiction. The National Book Foundation named her one of its 5 Under 35 authors. Her second novel, Cartwheel, was a finalist for the New York Public Library’s Young Lions Award. An alumna of the Iowa Writers’ Workshop and Stanford University’s Stegner Fellowship program, duBois is the recipient of a Whiting Award and a National Endowment for the Arts Creative Writing grant. She teaches in the MFA program at Texas State University. 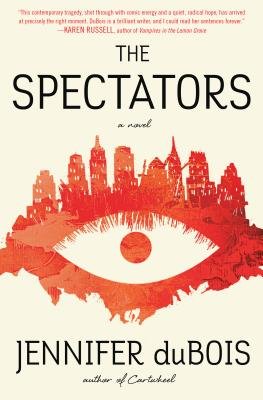