My Story of Justice, Grace, and the Fight for Peace

One woman’s inspiring true story of an unlikely alliance to stop the atrocities of a warlord, proving that there is no limit to what we can do, even in the face of unspeakable injustice and impossible odds

“This compelling and inspiring book beautifully moves each of us to take action to help the most vulnerable among us.”—Archbishop Emeritus Desmond Tutu

Late one night in the summer of 2010, Shannon Sedgwick Davis, a lawyer, human rights advocate, and Texas mom to two young boys, first met a Ugandan general to discuss an unconventional plan to stop Joseph Kony, a murderous warlord who’d terrorized communities in four countries across Central and East Africa.

For twenty-five years, Kony and his Lord’s Resistance Army had killed over a hundred thousand people, displaced millions, and abducted tens of thousands of children, forcing them to become child soldiers. After Sedgwick Davis met with survivors and community leaders, aid workers and lawmakers, it was clear that the current international systems were failing to protect the most vulnerable. Guided by the strength of her beliefs and convictions, Sedgwick Davis knew she had to help other parents to have the same right she had—to go to sleep each night knowing that their children were safe.

But Sedgwick Davis had no roadmap for how to stop a violent armed group. She would soon step far outside the bounds of traditional philanthropy and activism and partner her human rights organization, the Bridgeway Foundation, with a South African private military contractor and a specialized unit within the Ugandan army. The experience would bring her to question everything she had previously believed about her role as a humanitarian, about the meaning of justice, and about the very nature of good and evil.

In To Stop a Warlord, Shannon Sedgwick Davis tells the story, for the first time, of the unprecedented collaboration she helped build with the aim of finally ending Joseph Kony’s war—and the unforgettable journey on an unexpected path to peace. A powerful memoir that reads like a thriller, this is a story that asks us just how hard we would fight for what we believe in.

100 percent of the author’s net proceeds from this book will go to organizations seeking justice and protection for civilians in conflict zones.

An excerpt from To Stop a Warlord

It was long after midnight in San Antonio, Texas, when the phone rang. Brody, my four-year-old, had crawled in beside me an hour or two before and was taking up most of the bed. I never sleep deeply anymore, even at home, even in the middle of the night. When I heard my cellphone ring I was quick, pulling on my robe, heading for the back porch where I took my early morning calls from the field. The alarm on the back door beeped as I crossed into the night. Steps away from my sleeping husband and sons, I suddenly felt as distant from them as I did during my trips to Central Africa, where I slept alone in a tent, surrounded by the snoring of hundreds of men, where being so far from my family was a physical ache in my chest.

Laren Poole’s voice came through the static of his satellite phone. Laren managed the operations of our mission in the field. His voice rippled with urgency as he spoke the words, the coded phrase we had devised should a moment like this ever arise.

My heart leapt and my stomach dropped, some combination of excitement and dread, my mind whirring with the additional resources we’d need to pull together in support of a targeted operation, an unconventional collaboration between the Ugandan military, US Special Forces, humanitarian organizations, and the Bridgeway Foundation, the organization I run. Our cobbled-together alliance of private and public, military and humanitarian organizations was piloting a new way of trying to stop mass atrocities, and Laren’s words were the signal that it was time to go all in on our mission to catch Joseph Kony.

It was 2013, and by that point Joseph Kony and his Lord’s Resistance Army (LRA) had terrorized the citizens of four countries in Central Africa for more than twenty-five years. The numbers were staggering: more than a hundred thousand dead. At least thirty thousand children abducted and forced to become soldiers or sex slaves. At the height of the conflict, ninety percent of the northern Ugandan population—almost two million innocent civilians—were forcefully displaced and put under curfew by the Ugandan military in their attempts to counter the LRA. Government troops denied civilians access to their land and they were crowded into squalid camps, caught in the midst of a brutal war. Even those devastating figures don’t fully describe the suffering unleashed by the LRA. Their violence was especially brutal, often worse than I’d seen elsewhere in my human rights work. Kony and his army were setting a bar for evil in our world and kept raising it. In 2005, when the International Criminal Court in The Hague issued its first-ever arrest warrants, indictments were handed down against Joseph Kony and four other LRA leaders for crimes against humanity. Three of five indictees, including Kony, were still at large, and the violence against the innocent had only worsened.

For a decade Kony had been like a ghost, invisible except in the stories of those who had escaped from his army or survived LRA attacks. Over the last five years, all the information our shared mission had gathered had made us fairly certain we knew the general area in which he was hiding. But pinpointing his exact location in that terrain was nearly impossible. On bad days, I’d often wondered whether our hope of capturing him and bringing him to justice was nothing more than a moon shot. But now, our target had materialized clearly in our sights: Kony’s nerve center in Kafia Kingi (K2), on disputed land between Sudan and South Sudan, had been identified.

Now, if we worked quickly, if our allies were skilled, and if we were lucky, Kony’s reign of terror might finally come to an end. Laren and I couldn’t talk specifics over the satellite phone; it wasn’t secure. It would be another week before he could brief me on the new intelligence that had bolstered his confidence that this time we could catch Kony.

I sat on the back porch, watching the sun start to rise. I had waited for this moment for almost three years, yet the surge of excitement and enthusiasm was muted by exhaustion. I was tired. And alone. Laren, my sounding board and partner in the operation, was half a world away and not around to answer the many questions racing through my mind. And I was all too aware that history was not on our side. The last time there had been confirmation of Kony’s hideout was in 2008, when Ugandan, Congolese, and Southern Sudanese forces, with advisement from the US military, had launched a joint assault on the LRA camp. The operation had failed, reportedly due to leaked intelligence, bad weather, poor coordination, and resentments among the collaborating armies. Kony and his soldiers had scattered, breaking into small, mobile groups that were able to weave back and forth across borders and evade capture. The failed operation had made it more difficult to combat the LRA, and it had been devastating for civilians: in the weeks that followed, close to a thousand people were killed in a series of bloody reprisal attacks in northeastern Congo.

If this opportunity was missed, Kony would likely slip off the edge of the Earth again, taking his army and hostages with him and perhaps leaving a trail of destruction in his wake. We weren’t only betting the resources and partnerships it had taken us most of a decade to cultivate. Also at stake were the lives of women and children held captive in Kony’s K2 camp and the civilians who might become victims of his vengeance.

Shannon Sedgwick Davis is the CEO of the Bridgeway Foundation, a philanthropic organization dedicated to stopping mass atrocities, and an award-winning advocate for social justice and international human rights. She previously served as the vice president of Geneva Global and director of public affairs at the International Justice Mission. She is an Advisory Council member of The Elders, the group of global statesmen founded by Nelson Mandela, and a board member of several organizations, including Humanity United and charity: water. She lives with her family in San Antonio, Texas.

My Story of Justice, Grace, and the Fight for Peace 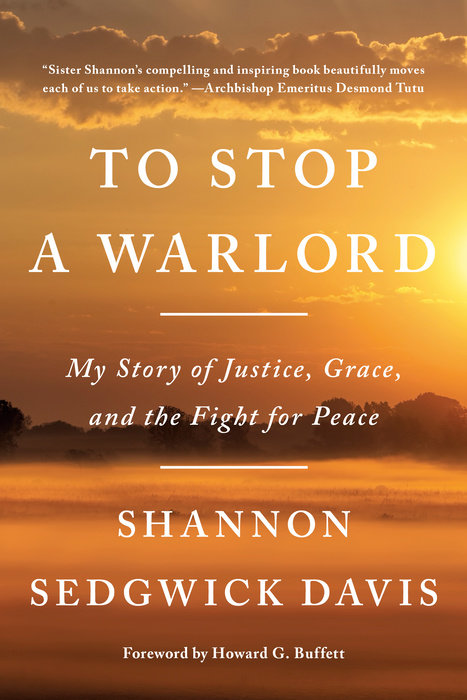