“Mesmerizing . . . a dark fairy tale of New York, full of magic and loss, myth and mystery, love and madness.”—Marlon James, author of the Dark Star trilogy

When Apollo Kagwa’s father disappeared, he left his son a box of books and strange recurring dreams. Now Apollo is a father himself—and as he and his wife, Emma, settle into their new lives as parents, exhaustion and anxiety start to take their toll. Apollo’s old dreams return and Emma begins acting odd. At first Emma seems to be exhibiting signs of postpartum depression. But before Apollo can do anything to help, Emma commits a horrific act and vanishes. Thus begins Apollo’s quest to find a wife and child who are nothing like he’d imagined. His odyssey takes him to a forgotten island, a graveyard full of secrets, a forest where immigrant legends still live, and finally back to a place he thought he had lost forever.

“The thriller you won’t be able to put down.”—O: The Oprah Magazine

“Intense, riveting . . . The story is a long, slow burn with a lingering sizzle.”—Los Angeles Review of Books

“A modern-day tale of terror rooted in ancient myth and folklore, brimming with magical revelation and emotional truth.”—San Francisco Chronicle

An excerpt from The Changeling

This fairy tale begins in 1968 during a garbage strike. In February New York City’s sanitation workers refused to pick up trash for eight straight days. One hundred thousand tons of garbage filled the sidewalks, spilled into the streets. Rats ran laps alongside morning joggers. Rubbish fires boiled the air. The five boroughs had been given up for dead. Still, there was some cracked magic in the air because that was when Lillian and Brian met. Each had journeyed from far-flung lands to find one another in Queens. Neither could’ve guessed the wildness that falling in love would unleash.

Lillian Kagwa emigrated from Uganda while Brian West arrived from the only slightly less foreign territory of Syracuse. This daughter of East Africa and son of upstate New York met at a cut-rate modeling agency on Northern Boulevard. Neither was a client.

The week of the garbage strike Lillian got hired as a secretary at the agency, greeting guests at the front desk. A pleasant sight for folks strolling sidewalks saddled with week-old waste. Brian, a parole officer, had been paying occasional visits to the agency’s founder, Pavel Aresenyev, one of his parolees, who’d spent four years in prison for fraud. Brian didn’t believe Pavel had gone legit. But that week Brian became focused less on Mr. Aresenyev and more on the new secretary who greeted him when he arrived. Meeting her felt like finding a rose growing in a landfill. Brian dropped by the modeling agency four times that week.

Despite his immediate attraction, Brian had a habit of mispronouncing Lillian Kagwa’s last name, and Lillian kept mistaking Brian for other white men. Hardly kismet. Still Brian West—short, stocky, and persistent—simply wouldn’t quit. And on the days when he didn’t show up, Lillian, to her own surprise, found she missed him.

Lillian Kagwa had come from Jinja, the second-largest city in Uganda, where she’d lived through the country’s emancipation from Britain and its eventual homegrown rule by Milton Obote. Obote used the army and his secret police, the General Service Unit, to rule the land. They spread wickedness wherever they went.

In 1967 Lillian and three cousins were traveling to the capital, Kampala, when they were pulled over by three men claiming to be agents of the GSU. The four cousins sat quietly as the agents inspected their identification, then demanded the only male cousin—Arthur—come out and open the trunk. Arthur didn’t want to leave Lillian and his sisters and hesitated. In that moment, one agent leaned in and casually shot Arthur in the stomach.

Lillian and her cousins were temporarily deafened by the sound, blinded by the muzzle flash, but Lillian still sensed the agent who’d fired the gun pawing inside the car to pull out the keys. Lillian, at the wheel, shifted the car into drive and shot off before her senses had returned to her, weaving across the two-lane road like a drunk. The agents fired at the car but couldn’t pursue it; their own vehicle had run out of gas. They’d set up the checkpoint to steal a suitable vehicle and would have to wait for another.

Lillian reached Kampala in half an hour, speeding the whole way. Arthur died long before that. An incident like this hardly counted as newsworthy. Uganda, as a whole, was going buckwild, and Lillian Kagwa wanted out. One year later Lillian secured a visa to the United States.

In 1968 Lillian came to New York. She was twenty-five and knew no one, but because of Uganda’s British rule, she already spoke the king’s English, and this made her transition easier. One of the reason’s Mr. Aresenyev hired her at the modeling agency was because her command of English was so much better than his. She made the business sound serious, legitimate, though Brian West’s suspicions were right: the whole thing was a scam. Lillian didn’t know this when she accepted the work. All she knew was the job paid twice the state minimum wage, three bucks an hour. Back in Uganda, she hadn’t been able to find work of any kind, so she cherished the gig. And what was a garbage strike compared with state-sanctioned murder?

The agency, Glamour Time, was run out of a windowless second-floor office near Queensboro Plaza, remote from any hub of high fashion but centrally located for soaking the aspiring models of working-class Queens. Potential clients could join the agency as long as they had headshots. Luckily, Mr. Aresenyev had a small studio right there at the agency and could snap the shots himself for a fee. For certain young women, he offered to take the shots after hours, just the two of them. The streets of New York were overrun with uncollected garbage, but Glamour Time carried its own stink. The only honest aspect of the business was the East African woman answering phones out front.

Mr. Aresenyev’s business might’ve run just fine for quite a while, soaking hopeful young women for years, except his damn parole officer had made the front office into his second home. How were you going to run a decent fraud when a cop was stopping by every other morning? Brian West was bad for business. And since he was smitten with Lillian that meant Lillian Kagwa was bad for business. So Mr. Aresenyev fired her. Not the smartest plan, but Mr. Aresenyev wasn’t bright. Now Brian pursued Pavel relentlessly, an Inspector Javert from Onondaga County. Charging for the headshots wasn’t illegal, but running a photo studio without a permit was enough to count as a violation of parole. Pavel Aresenyev went back to jail. Brian West got a commendation. Lillian Kagwa needed a new job.

She worked as an administrative secretary at a law firm in midtown Manhattan. The new job paid less. She moved into a smaller apartment. She cut off all communications with Brian. He’d cost her a good job, and the commute to midtown added a half hour of travel time each way, so no, she did not want to get dinner and a movie with Brian, thank you. Anyway, she was young, and it was New York City, where a lot more fun was to be had than back in Jinja. They met in 1968 but didn’t go on their first real date until eight years later.

Brian West gave Lillian room, backed off by a borough; he rented a place on Staten Island, but he couldn’t stop thinking of her. Why? What was it about Lillian? He couldn’t quite explain. It was as if she’d cast a spell.


Brian West had been the only child of two wildly unromantic drunks. At twelve Brian had a job selling candy at the Elmwood Theatre. He made the mistake of proudly displaying his earnings to his father, Frank. He expected a pat on the shoulder, words of congratulations; instead the boy endured a strong-arm robbery right in his own living room. His dad bought a case of Genesee beer with the money. Mom and Dad finished it before bedtime. A household like that will either break you or toughen you up. Maybe both. What was waiting on a woman to forgive you compared with having your father beat you up and steal your first paycheck?

Late in 1976 it finally happened. Brian West and Lillian Kagwa went on a date. They’d both been twenty-five when they first met during the week of the garbage strike, but now they were thirty-three. Lillian had met a lot of men during those intervening years, and Brian benefited from the comparison. He worked hard, didn’t drink, saved his money, and paid his debts. Funny how much she valued such qualities now. The only hiccup came at dinner, when Brian talked about how much he wanted children, the chance to be a husband and a father. As soon as he’d seen her at Glamour Time he’d sensed she would be a wonderful mother. When he finished talking she reminded him, gently, that this was their first date. Maybe they could wait to make wedding plans until after the movie at least? To Brian’s credit, he didn’t act wounded or angry—he laughed. He didn’t know it, but it was at this moment that Lillian truly fell for him.

He took her to see Rocky. It wouldn’t have been Lillian’s choice, but halfway through the movie, she started to enjoy herself. She even saw herself on the screen. A fierce dreamer. That’s what this movie was about. And wasn’t that her? She liked to think so. Maybe that was why Brian brought her to see this picture. To show her something about himself that he could never put into words. He’d told her the story of being robbed by his father, and she’d told him about Arthur getting gutshot in the car, and now here they both were in a darkened Times Square theater. Together. A pair of survivors. It seemed so unlikely—all the life that had led them here—as improbable as myth. In the dark she held his hand. Though they wouldn’t have sex for another three hours, it would be accurate to say their first child—their only child—was conceived right then. A thought, an idea, a shared dream; parenthood is a story two people start telling together.

By April 1977 Lillian was showing. Brian found them a two-bedroom apartment in Jackson Heights. Their son came in September. Brian thought it would be weird to name a half-black kid Rocky, so instead they named him Apollo. Brian liked to carry the newborn in the crook of one arm, cooing to him, “You are the god, Apollo. Good night, my little sun.” And they lived happily ever after. At least for a few years.

Brian hadn’t run off with another woman or skipped town to move back to Syracuse. The man might as well have been erased from existence. He couldn’t be found because he’d left no trail, neither breadcrumbs nor credit card receipts. Gone. Disappeared. Vanished.

When Apollo was born, Brian and Lillian thought they’d reached the end of the story, but they’d been wrong. The wildness had only begun.

Victor LaValle is the author of six previous works of fiction: three novels, two novellas, and a collection of short stories. His novels have been included in best-of-the-year lists by The New York Times Book Review, Los Angeles Times, The Washington Post, Chicago Tribune, The Nation, and Publishers Weekly, among others. He has been the recipient of a Guggenheim Fellowship, an American Book Award, the Shirley Jackson Award, and the Key to Southeast Queens. He lives in New York City with his wife and kids and teaches at Columbia University. 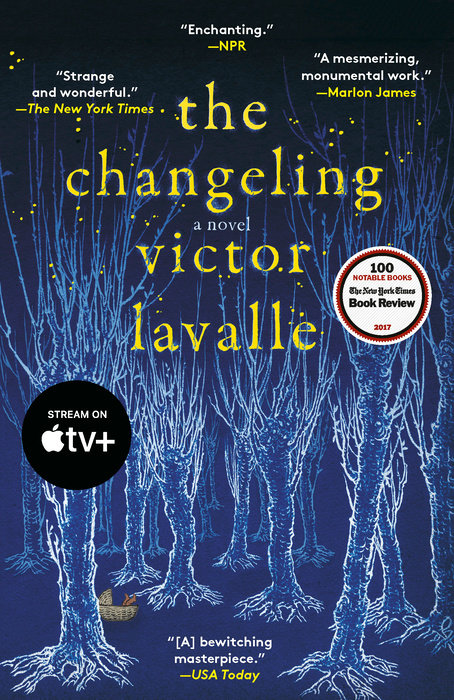