A Love Story, in Music Lessons

NEW YORK TIMES BESTSELLER • A beautifully written, witty memoir that is also an immersive exploration of classical music—its power, its meanings, and what it can teach us about ourselves—from the MacArthur “Genius” Grant–winning pianist

LONGLISTED FOR THE ANDREW CARNEGIE MEDAL • “Jeremy Denk has written a love letter to the music, and especially to the music teachers, in his life.”—Conrad Tao, pianist and composer

ONE OF THE BEST BOOKS OF THE YEAR: The New Yorker

In Every Good Boy Does Fine, renowned pianist Jeremy Denk traces an implausible journey. His life is already a little tough as a precocious, temperamental six-year-old piano prodigy in New Jersey, and then a family meltdown forces a move to New Mexico. There, Denk must please a new taskmaster, an embittered but devoted professor, while navigating junior high school. At sixteen he escapes to college in Ohio, only to encounter a bewildering new cast of music teachers, both kind and cruel. After many humiliations and a few triumphs, he ultimately finds his way as a world-touring pianist, a MacArthur “Genius,” and a frequent performer at Carnegie Hall.

Many classical music memoirs focus on famous musicians and professional accomplishments, but this book focuses on the everyday: neighborhood teacher, high school orchestra, local conductor. There are few writers capable of so deeply illuminating the trials of artistic practice—hours of daily repetition, mystifying advice, pressure from parents and teachers. But under all this struggle is a love letter to the act of teaching.

In lively, endlessly imaginative prose, Denk dives deeply into the pieces and composers that have shaped him—Bach, Mozart, and Brahms, among others—and offers lessons on melody, harmony, and rhythm. How do melodies work? Why is harmony such a mystery to most people? Why are teachers so obsessed with the metronome?

In Every Good Boy Does Fine, Denk shares the most meaningful lessons of his life, and tries to repay a debt to his teachers. He also reminds us that we must never stop asking questions about music and its purposes: consolation, an armor against disillusionment, pure pleasure, a diversion, a refuge, and a vehicle for empathy.

An excerpt from Every Good Boy Does Fine

My father was a monk. It’s fun to drop this into conversation and watch for the double take. “Before I was born!” I add with a wink. When I was a child, Dad loved to tell stories about his decade with the church. One elderly brother refused to walk down the hall to the toilet and kept a pail in his room—he was dubbed “Thunderbucket.” He dumped the pail out his window one morning, spilling its contents on a painting in the chapel below; this came to be known as “The Miracle of the Weeping Madonna.” Dad went on and on about his roommate, Frater Lawrence, a brilliant thinker who didn’t bathe, who “looked like an ape and smelled worse.” Lawrence tutored my father on Dante, until he and his odors were mysteriously spirited off to Rome. My favorite characters were the spunky nuns Dad met when the abbey sent him to Notre Dame, cussing up a storm at the football games.

Because of these stories, my brother and I found the monastery intriguing. We assumed it was somewhere you went for kicks, like a theme park or resort. “Why’d you leave?” we’d ask, not knowing we were questioning our own right to exist. Though he always gave the same answer, he made us wait for it. All those devotional years had made him desperate to perform, and no audience was too small or gullible. He hammed it up, frowning, sighing, appearing to shake off searing memories and shadows of existential doubt, until at last he said: “I just couldn’t stand the fried chicken.”

We didn’t know why this was funny, and Dad always followed his favorite lines with a stern, almost-furious face, so that you didn’t know if laughter was allowed. I remember seeing that same expression years later, just after I’d moved my parents into assisted living. We were sitting around at lunch. An ambulance pulled up in the parking circle, lights flashing. “Here comes the meat wagon,” Dad said, letting his gaze fall on a nearby resident, slumped in a wheelchair, hooked up to an oxygen tank. We all felt we had to laugh, but he kept at the frown, sustaining it like a pedal tone in music, insisting on the truth behind the punch line.


In assisted living, Mom made Dad go to writing class with her. That’s how my brother and I finally got serious answers about the past. The main class assignment was a memoir. Dad complained, but you could tell he loved it. He squirreled himself away in his room, keyboard clicking madly, like a journalist on a deadline. The resulting autobiography—“The Demythologization of Uncle Joe”—is written in a curious hybrid style, somewhere between Boswell’s Life of Samuel Johnson and a Rodney Dangerfield routine. The elevated sentences are often too elevated (“As will be seen coloring the following barely historical and no doubt somewhat unavoidably fictional life chapters, the writing of which I now find to be inescapable, my life has been far from being epical”). The jokes have a way of circling back and making fun of themselves. There are lengthy factual passages where he seems to take special pleasure in boring you. But every so often, a sincere descriptive sentence slips through the cracks and breaks your heart.

The first chapter alludes to tremendous guilt and refuses to specify a cause. Guilt for guilt’s sake. Dad grew up in the Chicago suburbs: Irish mother, Bavarian father. The patriarch is mentioned least, but you sense he is the villain: grasping, disciplinary, severe. My father found his family escape in science: college in DeKalb, then a job as a chemical engineer in New Jersey. This lasted for a number of years. If you don’t like the smell of the New Jersey Turnpike, you can blame him.

But at this point in the memoir, without explanation, a new thread emerges: an interest in the theater, poetry, literature. Facts paled before beauty. Dad started venturing into New York City, frequenting bohemian cafés, far from his vacuum tubes. And there, in that den of iniquity (where I now live), surrounded by actors (whom I avoid), seemingly in search of adventure and freedom, he met the last thing you would expect: a nice Catholic girl, Mary Elise Rafferty, of East Orange, New Jersey. The dream of a creative life retreated. They got married a year later: “what they call love at first sight, but more accurately ought to be called an act of desperation on both our parts.” But Mary Elise had asthma, which became pneumonia on their honeymoon, and later chronic bronchitis, of which she died on December 3, 1955, three years after their wedding. They weren’t able to consummate their marriage.

After her death, science lost what remained of its volatile luster. Dad began Bible study classes. They weren’t enough, and so: off to the monastery he went, for ten years. Nothing in my life to date approaches this act of selling everything you own, surrendering self and ambition. Yet I feel that his choice wasn’t one hundred percent faith. It had an aesthetic element. He craved to perform a moral act that was also beautiful. Dad and I eyed each other warily because we shared that underlying bias: overflowing tenderness for art and ideas; cautious irony toward people. If the boat was sinking, and the choice was between saving more passengers or the last copy of Bach’s Saint Matthew Passion, we would both hesitate.

And so, while the Sexual Revolution upended the nuclear Beavers, and the civil rights struggle raged, and Vietnam escalated, Dad was immersing himself in the Bible, studying Dante and Homer, finishing a doctorate in chemistry so he could teach at Belmont Abbey College, becoming ordained, learning rituals. But his guilt found a cunning new avenue of attack. As the world’s arc bent toward justice, he felt he was engaged in a form of escapism—devotion to God was a moral failing greater than all the rest. He drove away from Catholicism in May 1969, and was stopped for speeding in Tennessee. I was born in May 1970. Dad gave me the middle name Martin, for Luther King Jr., a symbol of what he had missed.


My mom’s memoir portrays a stark but hilarious family split: prudent Prairie Home Companion types on one side; wild gumbo wastrels on the other. Her mother’s ancestors were Swedish Lutherans, but father Orville came from New Orleans. Orville’s aunt Zelda was fired from a department store for theft. Mom describes the moment Zelda was forced to move in with them:

Notice how she slips the piano in, at the end of a list of decadent, unnecessary, and dangerous things.

Orville had a series of decent jobs in the auto industry, and so they lived in prosperity through the Depression, with money to share:

A steady stream of men and women [rang] our back doorbell asking for handouts. Millie or Mother would answer the ring and shove me behind the door. Sandwiches, coffee, water, leftovers from last night’s dinner were regularly doled out as the people sat on the back steps. They were never invited in.

“They were never invited in”: a classic Mom line. You can’t tell if she approves of this boundary drawn on generosity, but she wants you to know about it.

This way of life evaporated when cigar-smoking Orville, ignoring doctors’ warnings, collapsed of a heart attack, leaving the family with no resources. I think it made it harder for my mother that they weren’t victimized by world events, but by personal failing. Mom’s response to fate was to worry about every action, freezing everything in place, a strategy that worked all too well. It made her more physically immobile, year by year, until even the three-inch step to her front door was a challenge. I try to make light of my mother’s anxieties; but every so often I feel this paralysis creep up on me onstage, in front of thousands of people.

After Orville’s death and a few scrappy years, Mom married a police officer named Fran. There is no portrait of Fran in her memoir. She explains only the pragmatic: how they acquired a car, fixed up a bathroom, and produced three kids. The tone of her prose doesn’t change—if anything, it becomes even more objective—when a note appears on the kitchen table, saying that Fran has decided to leave and won’t be back. A pair of vanishings: her father from a heart attack, her husband from a different failing of the heart. In music, the return of a theme is often a comfort or delight, but in real life not so much.

Jeremy Denk is one of America’s foremost pianists. Winner of a MacArthur “Genius” Fellowship and the Avery Fisher Prize, Denk is a member of the American Academy of Arts and Sciences. He returns frequently to Carnegie Hall and has recently appeared with ensembles including the Chicago Symphony, New York Philharmonic, and Los Angeles Philharmonic. His recordings have reached #1 on the Billboard classical charts and featured on many best-of-the-year lists. His writing has appeared in The New Yorker, The New Republic, The Guardian, and The New York Times Book Review. Denk graduated from Oberlin College, Indiana University, and the Juilliard School. He lives in New York City.

A Love Story, in Music Lessons 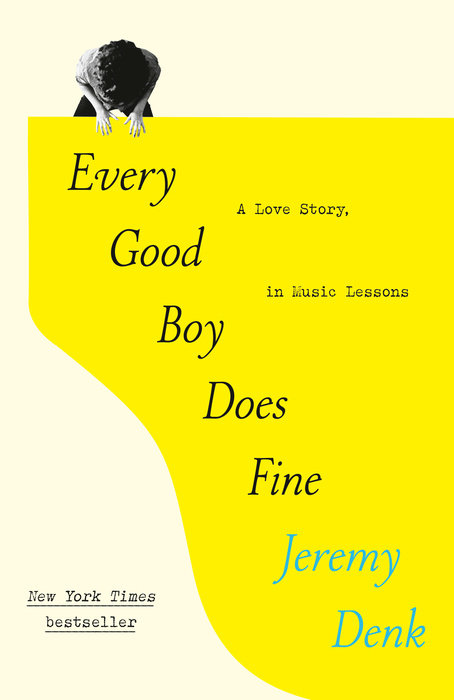