An Epic Story of Heroism, Friendship, and Sacrifice

NEW YORK TIMES BESTSELLER • NOW A MAJOR MOTION PICTURE • From America’s “forgotten war” in Korea comes an unforgettable tale of courage by the author of A Higher Call.

“In the spirit of Unbroken and The Boys in the Boat comes Devotion.”—Associated Press • “Aerial drama at its best—fast, powerful, and moving.”—Erik Larson

Devotion tells the inspirational story of the U.S. Navy’s most famous aviation duo, Lieutenant Tom Hudner and Ensign Jesse Brown, and the Marines they fought to defend. A white New Englander from the country-club scene, Tom passed up Harvard to fly fighters for his country. An African American sharecropper’s son from Mississippi, Jesse became the navy’s first Black carrier pilot, defending a nation that wouldn’t even serve him in a bar.

While much of America remained divided by segregation, Jesse and Tom joined forces as wingmen in Fighter Squadron 32. Adam Makos takes us into the cockpit as these bold young aviators cut their teeth at the world’s most dangerous job—landing on the deck of an aircraft carrier—a line of work that Jesse’s young wife, Daisy, struggles to accept.

Deployed to the Mediterranean, Tom and Jesse meet the Fleet Marines, boys like PFC “Red” Parkinson, a farm kid from the Catskills. In between war games in the sun, the young men revel on the Riviera, partying with millionaires and even befriending the Hollywood starlet Elizabeth Taylor. Then comes the conflict that no one expected: the Korean War.

Devotion takes us soaring overhead with Tom and Jesse, and into the foxholes with Red and the Marines as they battle a North Korean invasion. As the fury of the fighting escalates and the Marines are cornered at the Chosin Reservoir, Tom and Jesse fly, guns blazing, to try and save them. When one of the duo is shot down behind enemy lines and pinned in his burning plane, the other faces an unthinkable choice: watch his friend die or attempt history’s most audacious one-man rescue mission.

A tug-at-the-heartstrings tale of bravery and selflessness, Devotion asks: How far would you go to save a friend?

An excerpt from Devotion (Movie Tie-in)

North Korea, during the first year of the Korean War

In a black-­blue flash, a Corsair fighter burst around the valley’s edge, turning hard, just above the snow. The engine snarled. The canopy glimmered. A bomb hung from the plane’s belly and rockets from its wings.

Another roar shook the valley and the next Corsair blasted around the edge. Then came a third, a fourth, a fifth, and more until ten planes had fallen in line.

The Corsairs dropped low over a snow-­packed road and followed it across the valley, between snow-­capped hills and strands of dead trees. The land was enemy territory, the planes were behind the lines.

From the cockpit of the fourth Corsair, Lieutenant Tom Hudner reached forward to a bank of switches above the instrument panel. With a flick, he armed his eight rockets.

Tom was twenty-­six and a navy carrier pilot. His white helmet and raised goggles framed the face of a movie star—­flat eyebrows over ice-­blue eyes, a chiseled nose, and a cleft chin. He dressed the part too, in a dark brown leather jacket with a reddish fur collar. But Tom could never cut it as a star of the silver screen—­his eyes were far too humble.

At 250 miles per hour, Tom chased the plane ahead of him. It was nearly 3 p.m., and dark snow clouds draped the sky with cracks of sun slanting through. Tom glanced from side to side and checked his wingtips as the treetops whipped by. Beyond the hills to the right lay a frozen man-­made lake called the Chosin Reservoir. The flight was following the road up the reservoir’s western side.

The radio crackled and Tom’s eyes perked up. “This is Iroquois Flight 13,” the flight leader announced from the front. “All quiet, so far.”

“Copy that, Iroquois Flight,” replied a tired voice. Seven miles away, at the foot of the reservoir, a Marine air controller was shivering in his tent at a ramshackle American base. His maps revealed a dire situation around him. Red lines encircled the base—­red, enemy lines. To top it off, it was one of the coldest winters on record. And the war was still new.

The engine droned, filling Tom’s cockpit with the smell of warm oil. Tom edged forward in his seat and looked past the whirling propeller. His eyes settled on the Corsair in front of him.

In the plane ahead, a pilot with deep brown skin peered through the rings of his gunsight. The man’s face was slender beneath his helmet, his eyebrows angled over honest dark eyes. Just twenty-­four, Ensign Jesse Brown was the first African American carrier pilot in the U.S. Navy. Jesse had more flight time than Tom, so in the air, he led.

Jesse dipped his right wing for a better view of the neighboring trees. Tom’s gut tensed.

Jesse snapped his plane level again. “Not a thing.”

Through the canopy’s scratched Plexiglas, Tom watched the cold strands blur past at eye level. The enemy was undoubtedly there, tucked behind trees, grasping rifles, holding their fire so the planes would pass.

Tom clenched his jaw and focused his eyes forward. As tempting as it was, the pilots couldn’t strafe a grove of trees on a hunch. They needed to spot the enemy first.

The enemy were the White Jackets, Communist troops who hid by day and attacked by night. For the previous week, their human waves had lapped against the American base night after night, nearly overrunning the defenses. Nearly a hundred thousand White Jackets were now laying siege to the base and more were arriving and moving into position.

Against this foe stood the base’s ten thousand men—­some U.S. Army soldiers, some British Commandos, but mostly U.S. Marines. Reportedly, the base even had its cooks, drivers, and clerks manning the battle lines at night, freezing alongside the riflemen.

Their survival now hinged on air power and the Corsair pilots knew it. Every White Jacket they could neutralize now would be one fewer trying to bayonet a young Marine that night.

“Heads up, disturbances ahead!” the flight leader radioed.

“Watch the rocks!” Jesse said as he zipped over them.

Tom wrapped his index finger over the trigger of the control stick. His eyes locked on the roadside boulders.

When caught in the open, White Jackets would sometimes drop to the ground and curl over their knees. From above, their soiled uniforms looked like stone and the side flaps of their caps hid their faces.

The rock pile slipped behind Tom’s wings. He glanced into his rearview mirror. Behind his tail flew a string of six Corsairs with whirling, yellow-­tipped propellers. If any rocks stood now to take a shot, Tom’s buddies would deal with them. Tom trusted the men behind him, just as Jesse entrusted his life to Tom.

After two months of flying combat together, Tom and Jesse were as close as brothers, although they hailed from different worlds. A sharecropper’s son, Jesse had grown up dirt poor, farming the fields of Mississippi, whereas Tom had spent his summers boating at a country club in Massachusetts as an heir to a chain of grocery stores. In 1950 their friendship was genuine, just ahead of the times.

Tom caught the green blur of a vehicle beneath his left wing. Then another on the right.

He leaned from side to side for a better view.

Abandoned American trucks and jeeps lined the roadsides. Some sat on flat tires and others nosed into ditches. Snow draped the vehicles; their ripped canvas tops flapped in the wind. Cannons jutted here and there, their barrels wrapped in ice.

Tom’s eyes narrowed. Splashes of pink colored the surrounding snow. “Oh Lord,” he muttered. The day before, the Marines had been attacked here as they fought their way back to the base. In subzero conditions, spilled blood turned pink.

“Bodies, nine o’clock!” the flight leader announced as he flew past a hill on the left. “God, they’re everywhere!”

Jesse zipped by in silence. Tom nudged his control stick to the left and his fifteen-­thousand-­pound fighter dipped a wing.

Sun warmed the hillside, revealing bodies stacked like sandbags across the slope. Mounds of dead men poked from the snow, their frozen blue arms reaching defiantly. Tom’s eyes tracked the carnage as he flew past.

Are they ours or theirs? he wondered.

Just the day before, he had flown over and seen the Marines down there, waving up at him, their teenage faces pale and waxy. He had heard rumors of the horrors they faced after nightfall. That’s when the temperature dropped to twenty below, when the enemy charged in waves, when the Americans’ weapons froze and they fought with bayonets and fists.

Aboard the aircraft carrier, Tom and the other pilots had become accustomed to starting each morning with the same question: “Did our boys survive the night?”

With a deep growl, the flight—­now just six Corsairs—­burst into a new valley northwest of the reservoir.

Frustration lined Tom’s face. The enemy had remained elusive so the flight leader had dispatched the rearmost four Corsairs to search elsewhere.

The remaining six planes followed the road farther into hostile territory. The clouds ahead became stormier, as if the road were luring the pilots into Siberia itself.

Tom scanned for signs of life as the flight raced between frozen fields. Snow-­covered haystacks slipped past his wings. Crumbling shacks. Trees swaying in the wind.

Tom could tell that Jesse was frustrated too. They both should have been far from this winter wasteland. Tom should have been sipping a scotch in a warm country club back home and Jesse should have been bouncing his baby daughter on his lap under a Mississippi sun. Instead, they’d both come here as volunteers.

It wasn’t the risk that bothered them—­they were frustrated because they wanted to do something, anything, to defend the boys at the base. The night before, Jesse had written to his wife, Daisy, from the carrier: “Knowing that he’s helping those poor guys on the ground, I think every pilot on here would fly until he dropped in his tracks.”

Ahead of the flight, a voice barked a command from a roadside field. A dozen or more rifles and submachine guns rose up from the snow. Numb fingers gripped the weapons and shaking arms aimed skyward—­arms wrapped in white quilted uniforms.

The White Jackets. They had heard the planes coming and taken cover.

The shadow of the first Corsair passed overhead—­yet the enemy troops held their fire. The second shadow zipped safely past, too. The shadow of Jesse’s Corsair next raced toward the spot where weapons stood like garden stakes.

As Jesse’s shadow stretched over the hidden soldiers, the voice shouted. The rifles and submachine guns fired a volley, sending bullets rocketing upward. Quickly, the weapons lowered back into the snow.

Hailed as “a masterful storyteller” by the Associated Press, Adam Makos is the author of the New York Timesbestseller A Higher Call and the critically acclaimed Devotion. Inspired by his grandfathers’ service, Makos chronicles the stories of American veterans in his trademark fusion of intense human drama and fast-paced military action, securing his place “in the top ranks of military writers,” according to the Los Angeles Times. In the course of his research, Makos has flown a World War II bomber, accompanied a Special Forces raid in Iraq, and journeyed into North Korea in search of an MIA American airman. He lives in Denver.

An Epic Story of Heroism, Friendship, and Sacrifice 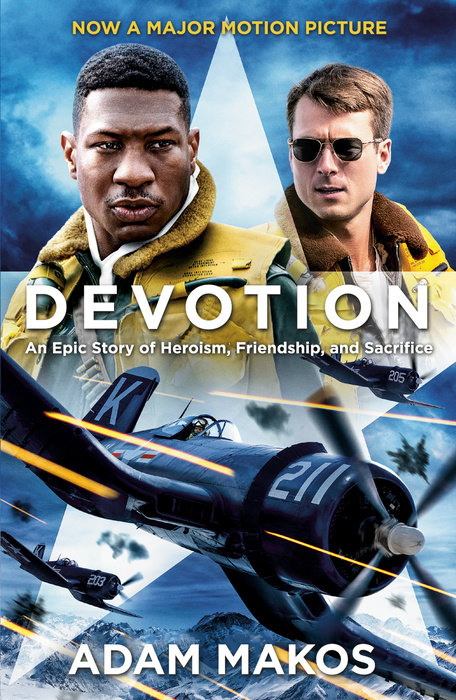