NEW YORK TIMES BESTSELLER • The perfect gift for new parents and grandparents this Mother’s Day: a bighearted book of wisdom, wit, and insight, celebrating the love and joy of being a grandmother, from the Pulitzer Prize–winning columnist and #1 bestselling author

“This tender book should be required reading for grandparents everywhere.”—Booklist (starred review)

“I am changing his diaper, he is kicking and complaining, his exhausted father has gone to the kitchen for a glass of water, his exhausted mother is prone on the couch. He weighs little more than a large sack of flour and yet he has laid waste to the living room: swaddles on the chair, a nursing pillow on the sofa, a car seat, a stroller. No one cares about order, he is our order, we revolve around him. And as I try to get in the creases of his thighs with a wipe, I look at his, let’s be honest, largely formless face and unfocused eyes and fall in love with him. Look at him and think, well, that’s taken care of, I will do anything for you as long as we both shall live, world without end, amen.”

Before blogs even existed, Anna Quindlen became a go-to writer on the joys and challenges of family, motherhood, and modern life, in her nationally syndicated column. Now she’s taking the next step and going full nana in the pages of this lively, beautiful, and moving book about being a grandmother. Quindlen offers thoughtful and telling observations about her new role, no longer mother and decision-maker but secondary character and support to the parents of her grandson. She writes, “Where I once led, I have to learn to follow.” Eventually a close friend provides words to live by: “Did they ask you?”

Candid, funny, frank, and illuminating, Quindlen’s singular voice has never been sharper or warmer. With the same insights she brought to motherhood in Living Out Loud and to growing older in Lots of Candles, Plenty of Cake, this new nana uses her own experiences to illuminate those of many others.

“Witty and thoughtful . . . Nanaville serves up enough vivid anecdotes and fresh insights—about childhood, about parenthood, about grandparenthood and about life—to make for a gratifying read.”—The New York Times

“Classic, bittersweet Quindlen . . . [Her] wonder at seeing her eldest child grow into his new role is lovely and moving. . . . The best parts of Nanaville are the charming vignettes of Quindlen's solo time with her grandson.”—NPR

Sunlight spreads across the checkerboard tiles in the kitchen, and so do many other things: wooden spoons, a rubber frog, Tupperware, a couple of puzzle pieces, some plastic letters, elements of the obstacle course of the active toddler. Did you know that the wheels on the bus go round and round, all through the town? They do, over and over again, sung by the robotic voice of some plastic magnetic thing on the refrigerator. Oh, and Old MacDonald has a farm. The hokey pokey? That’s what it’s all about.

This soundtrack, I know, will continue into perpetuity, first the nursery song, then the pop song, the rock song, the earworms of motherhood that emanate from the toy radio, the computer, from behind a closed bedroom door with a placard that says please knock. I have been here before. Sort of.

A little hand rests lightly on my leg, a pale starfish of almost no weight, so that I might not know it was there were I not looking down at it as though it were the Mona Lisa, the Pyramids, the Sistine Chapel ceiling. Look at those fingers! Those tiny pillowy knuckles! When Shakespeare wrote, “What a piece of work is man,” he must have been looking at a baby, I think to myself, which makes pretty clear that some crazy switch has been flipped in my brain. The wheels on the bus go round and round.

“Nana,” he says softly, in a high voice that I know from experience will someday be deep and sonorous. But not now. Now it is sweet and light, like something produced by one of the small woodwinds.

“Nana!” This time demanding, slightly petulant. And that’s when I notice that he is looking at the fruit bowl on the table and when I realize that he is not crooning my name at all, my new name, of which I am so proud.

He just wants a banana and the full word is too much for him at this moment in his development. “Nana” denotes a piece of fruit, not this woman who follows him around as though he were a drum major and she a marching band.

These are useful moments, when we are made to understand where we really rate in the topography of family, if we are smart enough to pay attention and humble enough to accept the verdict. I know you don’t want to consider this if you’re in the same position I am, and I keep hearing that there are people who pay the notion no mind, but we grandparents are secondary characters, supporting actors. We are not the leads. Mama. Daddy. These are the bedrock.

We know this from past experience, our own experience. We were mother and father, most of us, before we became grandmother and grandfather. And because of that it is sometimes hard to accept that we have been pushed slightly to the perimeter. We are now the people whose names come in the smaller print in the movie credits. It’s not that we are unimportant, as anyone who has ever had a grandparent knows. After all, secondary characters are what flesh out the plot: what would Great Expectations be without Miss Havisham, or Romeo and Juliet without the nurse? Mrs. Hudson may not get as much time in the stories as Sherlock Holmes does, but a reader is always very happy to have her show up.

The central figures of my childhood were my mother and father, but an essential part of the plot was my pink-skinned grandmother and gruff and demanding grandfather (Quindlen) and my dark and somber grandmother and gentlemanly grandfather (Pantano). They illuminated the story of where I had come from. Arthur’s grandfather and I, my daughter-in-law’s parents: it will be the same. We provide color, texture, history, mythology. But we are not central.

But Nana might just be a piece of fruit.

Later on he will be able to say “apple” and “tractor” and even, rumor has it, “pterodactyl,” although at the moment the last is such a welter of undifferentiated consonants that it would take a linguist, or a parent, to figure that out. Soon he has mastered the word “banana,” and when he does, Nana becomes notably me. “Nana, please,” he says when he wants something, often something he is not permitted to have. He is always happy to see me. He is not leveled by the leaving. On the evenings when I give him his dinner, his bath, and his bedtime stories, he sometimes cries as I put him in the crib because he realizes this means I’m all he has. “Mama and Daddy will be home soon,” I say, the magic words.

His grandfather is Pop. For a while there was one word: “Nanapop.” Sometimes there were three: “Nanapopgus.” Gus is a Labrador retriever. That certainly puts things in perspective, doesn’t it? 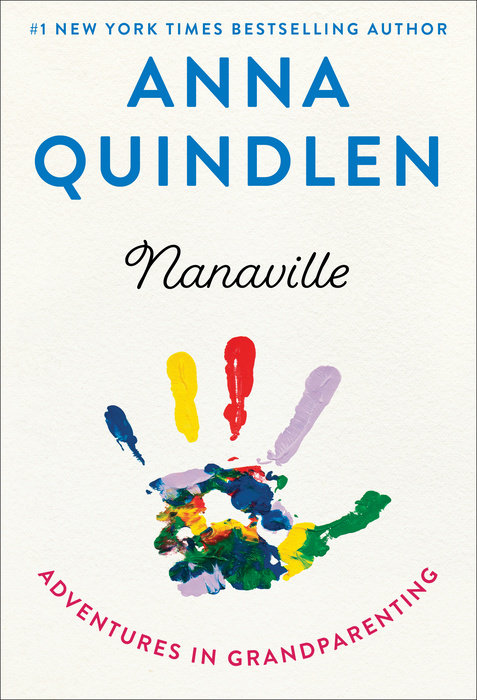