The Secrets of Highly Successful Groups

NEW YORK TIMES BESTSELLER • The author of The Talent Code unlocks the secrets of highly successful groups and provides tomorrow’s leaders with the tools to build a cohesive, motivated culture.

Where does great culture come from? How do you build and sustain it in your group, or strengthen a culture that needs fixing?

In The Culture Code, Daniel Coyle goes inside some of the world’s most successful organizations—including the U.S. Navy’s SEAL Team Six, IDEO, and the San Antonio Spurs—and reveals what makes them tick. He demystifies the culture-building process by identifying three key skills that generate cohesion and cooperation, and explains how diverse groups learn to function with a single mind. Drawing on examples that range from Internet retailer Zappos to the comedy troupe Upright Citizens Brigade to a daring gang of jewel thieves, Coyle offers specific strategies that trigger learning, spark collaboration, build trust, and drive positive change. Coyle unearths helpful stories of failure that illustrate what not to do, troubleshoots common pitfalls, and shares advice about reforming a toxic culture. Combining leading-edge science, on-the-ground insights from world-class leaders, and practical ideas for action, The Culture Code offers a roadmap for creating an environment where innovation flourishes, problems get solved, and expectations are exceeded.

Culture is not something you are—it’s something you do. The Culture Code puts the power in your hands. No matter the size of your group or your goal, this book can teach you the principles of cultural chemistry that transform individuals into teams that can accomplish amazing things together.

Praise for The Culture Code

“I’ve been waiting years for someone to write this book—I’ve built it up in my mind into something extraordinary. But it is even better than I imagined. Daniel Coyle has produced a truly brilliant, mesmerizing read that demystifies the magic of great groups. It blows all other books on culture right out of the water.”—Adam Grant, New York Times bestselling author of Option B, Originals, and Give and Take

“If you want to understand how successful groups work—the signals they transmit, the language they speak, the cues that foster creativity—you won’t find a more essential guide than The Culture Code.”—Charles Duhigg, New York Times bestselling author of The Power of Habit and Smarter Faster Better

An excerpt from The Culture Code

Let’s start with a question, which might be the oldest ques- tion of all: Why do certain groups add up to be greater than the sum of their parts, while others add up to be less?
A few years ago the designer and engineer Peter Skillman held a competition to find out. Over several months, he as- sembled a series of four-person groups at Stanford, the Uni- versity of California, the University of Tokyo, and a few other places. He challenged each group to build the tallest possible structure using the following items:

The contest had one rule: The marshmallow had to end   up on top. The fascinating part of the experiment, however, had less to do with the task than with the participants. Some of the teams consisted of business school students. The oth- ers consisted of kindergartners.
The business students got right to work. They began talk- ing and thinking strategically. They examined the materials.

They tossed ideas back and forth  and  asked  thoughtful,  avvy questions. They generated several options, then honed he most promising ideas. It was professional, rational, and ntelligent. The process resulted in a decision to pursue one particular strategy. Then they divided up the tasks  and  tarted building.
The kindergartners took a different approach. They  did not strategize. They did not analyze or share experiences. They did not ask questions, propose options, or hone ideas.   n fact, they barely talked at all.  They  stood  very  close  to one another. Their interactions were not smooth or orga- nized. They abruptly grabbed materials from one another  and started building, following no plan or  strategy.  When hey spoke, they spoke in short bursts: “Here! No,  here!”  Their entire technique might be described as trying a bunch of stuff together.
If you had to bet which of the teams would win, it would not be a difficult choice. You would bet on the business school tudents, because they possess the intelligence, skills, and ex- perience to do a superior job. This is the way we normally hink about group performance. We presume skilled individ- uals will combine to produce skilled performance in the same way we presume two plus two will combine to produce four. Your bet would be wrong. In dozens of trials, kindergart- ners built structures that averaged twenty-six inches tall, while business school students built structures that averaged
ess than ten inches.*

The result is hard to absorb because it feels like an illusion. We see smart, experienced business school  students, and we find it difficult to imagine that they would combine to produce a poor performance. We see unsophisticated, inexperienced kindergartners, and we find it difficult to imagine that they would combine to produce a successful perfor- mance. But this illusion, like every illusion, happens because our instincts have led us to focus on the wrong details. We focus on what we can see—individual skills. But individual skills are not what matters. What matters is the interaction. The business school students appear to be collaborating, but in fact they are engaged in a process psychologists call status management. They are figuring out where they fit into the larger picture: Who is in charge? Is it okay to criticize someone’s idea? What are the rules here? Their interactions appear smooth, but their  underlying  behavior is  riddled with inefficiency, hesitation, and subtle competition. Instead of focusing on the task, they are navigating their uncertainty about one another. They spend so much time managing sta- tus that they fail to grasp the essence of the problem (the marshmallow is relatively heavy, and the spaghetti is hard to secure). As a result, their first efforts often collapse, and they
run out of time.
The actions of the kindergartners appear disorganized on the surface. But when you view them as a single entity, their behavior is efficient and effective. They are not competing  for status. They stand shoulder to shoulder and work ener- getically together. They move quickly,  spotting  problems  and offering help. They experiment, take risks, and notice outcomes, which guides them toward effective solutions.

The kindergartners succeed not because they are smarter but because they work together in a smarter way. They are apping into a simple and powerful method in which a group of ordinary people can create a performance far beyond the um of their parts.
This book is the story of how that method works.

Group culture is one of the most powerful forces on the planet. We sense its presence inside successful businesses, hampionship teams, and thriving families, and we sense when it’s absent or toxic. We can measure its impact on the bottom line. (A strong culture increases net income 756 percent over eleven years, according to a Harvard study of more han two hundred companies.) Yet the inner workings of ulture remain mysterious. We all want strong culture in our organizations, communities, and families. We all know that t works. We just don’t know quite how it works.
The reason may be based in the way we think about cul- ure. We tend to think about it as a group trait, like DNA. Strong, well-established cultures like those of Google, Dis- ney, and the Navy SEALs feel so singular and distinctive that hey seem fixed, somehow predestined. In this way of think- ng, culture is a possession determined by fate. Some groups have the gift of strong culture; others don’t.
This book takes a different approach. I spent the last four years visiting and researching eight of the world’s most suc- essful groups, including a special-ops military unit, an nner-city school, a professional basketball team, a movie studio, a comedy troupe, a gang of jewel thieves, and others.* I found that their cultures are created by a specific set of skills. These skills, which tap into the power of our social brains to create interactions exactly like the ones used by the kindergartners building the spaghetti tower, form the structure of this book. Skill 1—Build Safety—explores how signals of connection generate bonds of belonging and iden- tity. Skill 2—Share Vulnerability—explains how habits of mutual risk drive trusting cooperation. Skill 3—Establish Purpose—tells how narratives create shared goals and values. The three skills work together from the bottom up, first building group connection and then channeling it into ac- tion. Each part of the book is structured like a tour: We’ll first explore how each skill works, and then we’ll go into the field to spend time with groups and leaders who use these methods every day. Each part will end with a collection of concrete suggestions on applying these skills to your group. In the following pages, we’ll spend time inside some of the planet’s top-performing cultures and see what makes them tick. We’ll take a look inside the machinery of the brain and see how trust and belonging are built. Along the way, we’ll see that being smart is overrated, that showing fallibility is crucial, and that being nice is not nearly as important as you might think. Above all, we’ll see how leaders of high-performing cultures navigate the challenges of achieving excellence in a fast-changing world. While successful culture can look and feel like magic, the truth is that   t’s not. Culture is a set of living relationships working toward a shared goal. It’s not something you are.  It’s something you do.

* I chose groups using the following qualifications: (1) they had performed in the top 1 percent of their domain for at least a decade (where applicable);
(2) they had succeeded with a range of different personnel; (3) their culture had been admired by knowledgeable people across their industry and be- yond. To help guard against selection bias, I also looked at many cultures that weren’t so successful (see page 40 for an example).

The Secrets of Highly Successful Groups 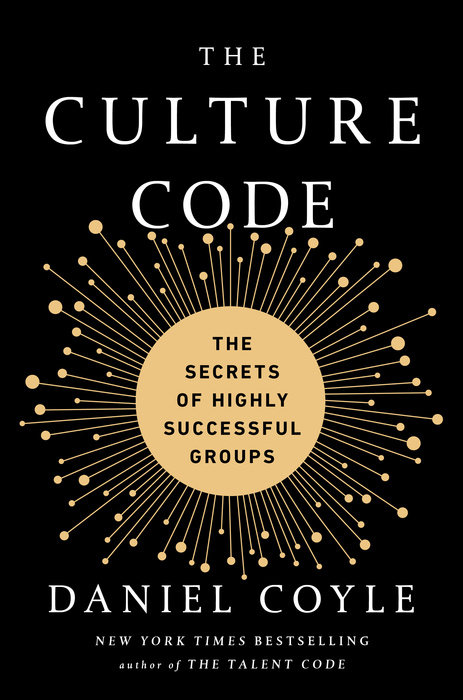