The Revolutionary Bond-Based Approach to Educating Your Dog

There are few people who understand dogs better than Jennifer Arnold. Twenty-five years after she founded Canine Assistants, a nationally recognized nonprofit that raises and provides service dogs for people with disabilities, Arnold had an epiphany. She’d always approached the education of dogs with kindness and compassion—eschewing the faux science of fear and domination-based training methods. And she’d always understood dogs to be uniquely, uncannily attuned to their human companions; in fact she depended on it—she knew that the bond that developed between a person and their service dog was the single greatest predictor of that partnership’s success and, conversely, failure to bond brought about anxiety and distress in dogs. But it wasn’t until recent scientific findings confirmed her hands-on experience with dogs’ intuitive social skills that she was willing to put this bold idea to the test: Dogs who bond with us completely and unconditionally will seek to please us and, with minimal cues, can learn to make remarkably sophisticated decisions about their own behavior. Sure, dogs can be taught commands such as “sit,” “stay,” and “heel,” but even the kindest reward and punishment models were merely manipulating dogs’ behavior, rather than unleashing their unique social genius and innate ability to navigate the world.

In this groundbreaking, persuasive, and heartfelt book, Arnold shows us how every dog—no matter their age—can thrive through Bond-Based Choice Teaching. Her proprietary method has been hailed by leading canine behavioral scientists and is being adopted by notable dog trainers, advocates, humane societies, and puppies behind bars programs across the country. For this liberating, revolutionary method to succeed, Arnold says, love really is all you need.

Advance praise for Love Is All You Need

“Jennifer Arnold, who has trained service dogs for the past twenty years for people with physical disabilities, offers a window into the world of ‘man’s best friend.’ Arnold, who believes that dogs are attuned to their owner’s needs and emotions, shares tips she thinks every dog owner should know.”—ABC News

“[Arnold] takes pride in facilitating the powerful relationship between every service dog and its owner—a bond that is as much about companionship and comfort as it is about health and safety.”—Everyday Health

“Within the world of dogs and canine behavior there are only a handful of people who truly ‘move the needle’ when it comes to innovation, novel approaches, and intuitive thinking—Jennifer Arnold is one of those rare few. Constantly pushing boundaries of traditional thought, she not only provides fresh perspectives about how we interact with and learn from man’s best friend, she fearlessly forges new paths that stimulate and engage dog lovers as well as behavior experts and explores possibilities which previously may have seemed out of reach.”—Victoria Stilwell, star of Animal Planet’s It’s Me or the Dog and CEO of Victoria Stilwell Positively Dog Training

An excerpt from Love Is All You Need

We obviously care deeply about our dogs, yet it has become clear that we may not be acting in their best interest. Today, dogs suffer from stress-­based disorders such as phobias, anxieties, hyperactivity, and obsessive-­compulsive behavior at an unprecedented rate. Dr. Kenneth Martin, a veterinary behaviorist in Texas, concludes from recent data that behavior problems are the number one reason that pets are taken to shelters or euthanized. Survey research conducted on behalf of the makers of Thundershirt, a swaddling garment designed to reduce anxiety in dogs, indicated that dogs’ owners spend over $1 billion annually dealing with their dogs’ stress-­related behaviors. I believe that traditional methods of training are in large part to blame for this epidemic. If we are to help our dogs, we need a new approach to living and working with them that moves beyond training. It’s time for a shift in the paradigm.

Of course, there are times that stress and fear can actually be helpful, acting as warning signals and encouraging us to take needed action. Being hungry is stressful, but as long as there is access to food, the stress is constructive, encouraging the intake of essential nutrients. Similarly, when a potential predator suddenly appears, fear promotes the immediate search for safety. However, when food is not readily available, the stress of hunger can become damaging, causing anxiety and feelings of desperation. Likewise, when a potential predator approaches a dog who is confined to a crate and unable to escape, the fear can again be damaging, both mentally and physically.

In fact, a study conducted by Dr. Nancy Dreschel, a veterinarian at Pennsylvania State University, showed that dogs who were significantly fearful of strangers died approximately six months earlier than their peers. The results of other studies, too numerous for detailed review, indicate that living with chronic stress and anxiety is harmful in a myriad of ways, from increased blood pressure to decreased bone density. We know that a state of constant fear is not a healthy, happy place to live, yet many of our dogs appear to have taken up residency there.

Why our dogs are so stressed is a question with multiple complex answers. First, we have put them in an environment that makes it impossible for them to alleviate their own stress and anxiety. When it was common and acceptable for dogs to run loose, they could hunt for their own food and determine ways to keep themselves safe from harm. In modern society, there is no way for our dogs to keep themselves safe, and thus we are unable to afford them the freedom to meet their own needs. Instead, they must rely on our benevolence for survival.

And our benevolence comes at a price. In exchange for care, we ask our dogs to fill certain roles in our lives. We always have. In the past those roles were ones for which dogs were well equipped. They helped guard and protect us. They helped us tend our farms and hunt for our food. By their very nature, dogs come well prepared for these kinds of physical tasks.

In modern times, however, the work of dogs has become significantly more emotional than physical. We need them to be our comforters, our confidants, our children who never grow up. Meeting the emotional needs of others isn’t an easy job. Our dogs are trying, and in large part they are succeeding. The cost, however, appears to be high, as is evidenced by the more than 2.8 million dogs estimated by the American Pet Products Association to be on Prozac or similar psychotropic drugs.

This situation, though far from optimal for our dogs, is unlikely to change any time soon. We must limit some of the freedoms that our dogs might otherwise enjoy—­such as running loose at will—­in order to keep them safe. In addition, the roles they play in our lives are well established and to a great extent beyond our ability to alter. But there is one thing we can and should control: how we teach our dogs to live alongside us.

When I was growing up in the 1960s and ’70s, training your dog meant helping him learn not to go potty in the house. Back then, obedience training for pet dogs was just barely beginning to make its way into the public mindset, and it hadn’t yet reached my little corner of Atlanta. But times have changed. Now the outliers are those who do not formally train their dogs. So powerful and pervasive is the idea that one’s dog must be obedience-­trained that a simple Google search of the phrase dog training brings up some 85 million hits.

The idea that as responsible pet parents we must instill obedience in our dogs has become more than just a way to teach them to sit when asked; it has become the very framework for our relationship with them. We treat our dogs largely as we train them. If you believe that dogs must be dominated into submission in order to learn to sit, you will probably be dominating in all that you do with your dog. If you believe that you must continually avoid reinforcing behaviors that you don’t want from your dog, then your relationship will be based on the dialectic of reward and punishment. Training ideologies have a pervasive impact on our relationships with our dogs, so it makes sense to examine them carefully.

While there are a myriad of different training techniques out there, the vast majority fall within one of two major camps:

1. Dogs should obey because I said so.

2. Dogs’ behavior should be controlled through conditioning.

Let’s take a closer look at each approach.

Because I Said So (BISS)

Believing that someone must do as you say merely because you say so stems largely from the belief that you have a clear right to impose your will on another without taking their thoughts and feelings into consideration. Not only do some dog trainers believe this is acceptable, they argue that demanding blind obedience from a dog is actually in his best interest. While complying with your directives may keep your dog out of trouble at times, it is no way to form a fair and mutually beneficial relationship.

One of the most significant problems with BISS methods is the potential abuse of power. BISS methods convey the idea that it is okay to demand compliance by any means necessary. But methods used to force dogs to obey, such as yelling, leash corrections, and physical punishment, often have serious unintended consequences.

Jennifer Arnold is the founder and executive director of Canine Assistants, a service-dog school based in Milton, Georgia, and the creator of the Bond-Based Choice Teaching® approach to interspecies relationships. She is the author of the New York Times bestseller Through a Dog’s Eyes, which was also the subject of a PBS documentary, and In a Dog’s Heart. She lives with her husband, veterinarian Kent Bruner; son Chase; four dogs; two cats; and a number of other animals.

The Revolutionary Bond-Based Approach to Educating Your Dog 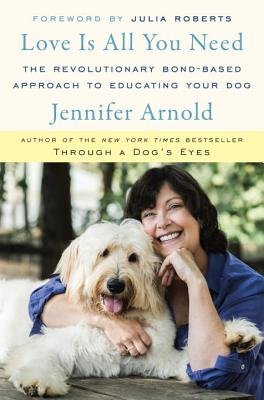