The 6 Secrets of Thin People

Bob Harper lets us in on the secret behaviors of people who not only lose weight but keep the pounds off for good—and make it look easy.

In Bob Harper’s #1 New York Times bestselling book The Skinny Rules, the trusted trainer and coach of NBC’s The Biggest Loser laid out the twenty nonnegotiable eating rules for getting thin.

In the process of helping countless men and women reach their weight loss goals, Harper has noticed six fundamental patterns in the lifestyle choices of those who succeed long-term—from the unique way they plan ahead to how they organize their environment and social calendars to even the way they dress. With his signature authority, colorful stories, and real-world solutions, Harper draws on the most up-to-date research related to habit formation, neuroplasticity, and cognitive behavioral psychology to show how feeding your brain—“the muscle between your ears”—can wield as much control over your weight as what you put in your mouth.

With anecdotes about his clients, guided steps for adopting your new practices, and tips for integrating them into your own daily routine, Skinny Habits has everything you need to shape your body and your life!

An excerpt from Skinny Habits

This isn’t your first rodeo. I know that you know a thing or two about the simple math of energy in and energy out (i.e., you’ve got to burn more energy through movement than you put in through your mouth in the form of food), and you’ve studied up a bit on nutrition (a whole lot less processed food, a whole lot more vegetables). You probably have a handle on what you need to do to manipulate your metabolism to burn more fat. And I’m guessing you have experienced firsthand the way your body sometimes reacts to your attempted manipulations: if it thinks that you’re going through a drought or famine, it does its best to store fat to protect you. Unfair, but true.

The details of what to put in your mouth and how much to exercise are, of course, super important when it comes to weight loss and weight maintenance, and I want you to learn as much as you can about nutrients and calories and the importance of timing when it comes to eating. Again, I encourage you to read The Skinny Rules for the facts and principles that will put you on a path to a much healthier weight. And I encourage you to cook more for yourself and to try new and weight-­friendly recipes. I’ve got a book for that too: Skinny Meals.

But then you’ve got to follow through on your intentions to cook and eat better, to listen to your body, and to stop eating when you are full! Because that’s what skinny people have the willpower to do, right?

But what is willpower? People who don’t struggle with their weight seem to have self-­control in spades, so much so that it seems natural, effortless. You seem to lack it; conjuring willpower and using it takes a megadose of conscious effort, effort you just don’t have in you.

To my trained eye, willpower is all about mindset. More specifically, a “skinny mindset.” And there’s good science to prove that I’m on to something.

Your mindset is your outlook on life, your underlying attitudes, biases, and assumptions about how the world works and your place in it; it’s a disposition shaped by years of experiences and countless influences. What you were exposed to as a child contributes to your present-­day mindset: your parents’ and friends’ attitudes, their politics, their health, their moods, their work ethic. And what you deal with every day shapes it as well: your job, your day-­to-­day stress level, and the health and mood of the person you’re dating or living with (yes, as you’ll learn in Chapter 5, who you hang out with is more important than you might think!).

People with what’s called a fixed mindset believe that strengths and capabilities are pretty much out of individual control. Instead, they believe that capabilities are either innate (you’re born with them) or attributable to external influences and triggers (something someone else does to or for them, something they buy, what they eat or drink).

Those with a growth mindset believe that abilities are not finite and also not dependent on an external event or influence; instead, they believe that individual effort can expand and improve talents or capabilities on its own. You can have fixed mindsets about some things and growth mindsets about others. It all depends on what you’ve been conditioned to believe and in what context.

An example: people with a fixed mindset about their abilities in math believe that their ease with math is something that they were born with, something perhaps they inherited from their math-­genius father or mother. Or they believe that being good at math is all about having the right teacher, textbook, or tutoring—­it’s about someone or something else stepping in to help make you better.

By contrast, people with a growth mindset believe that individual practice and effort can bolster their math skill. They believe that they aren’t at the mercy of their family’s math lameness or their own perceived limits.

It all comes down to this: Does it matter what you believe about willpower itself? Does that belief affect your ability to persevere when the going gets tough?

Consider the work of Carol Dweck, a professor of psychology at Stanford University, and the genius who coined the phrases fixed mindset and growth mindset.

Before Professor Dweck challenged it, the general assumption was that the body needed extra fuel to boost self-­control (willpower), the classic example being the snack—­a chocolate bar or cookie (some form of glucose)—­in the late afternoon when you’re just “so tired.” The logic was that mental tasks (like work!) deplete your energy, but a shot of glucose boosts it. I’m betting this is an assumption you’ve made yourself—­after all, it’s a great rationalization for that afternoon sugar hit! It’s also a great excuse for not being able to control your actions: you can argue that your body is telling you to eat that donut and you are helpless to really push back.

But Dweck didn’t buy it. She could see that the body is nothing if not a powerful energy-­conscious computer, able to maintain physiological balance so long as it’s not being put under great stress (like illness or famine or drought). So she wondered why such an intricate and powerful contraption like the body wouldn’t adjust itself—­releasing stored glucose from the liver, say—­rather than depending on external sources (like a chocolate bar!) when energy or focus starts to wane. She wondered if something psychological, like belief—­what she came to call “mindset”—­mattered. To test her hunch, she designed a series of ingenious experiments.

First, she used a questionnaire to get a handle on what a large group of people (sixty) felt about willpower. Based on those results, she found that her subjects fell into two groups.

One group consisted of people whose answers showed they felt there’s only so much willpower at any individual’s command at any given time, and when it’s depleted, you lose the self-­control you need for any effortful task: exercising, resisting a donut, paying attention—­you name it. Obviously, this was the “fixed mindset” crowd.

In contrast, the other group believed that willpower was something dynamic, renewable, plentiful—­something you can generate on your own through awareness, hard work, and confidence. These people had a “growth mindset” about willpower.

She hadn’t asked these people anything that would suggest she was testing their belief in the glucose–­self-­control theory, but that’s what she was trying to do.

Now it got interesting. Professor Dweck put these people through a series of tests that demanded strenuous mental concentration—­crossing out every other e in a text, or identifying complex color-­shape combinations. Sticking with the challenge took focus and self-­control. About halfway through the challenge, she gave both groups a sugary snack (lemonade). What she found was surprising, arguably revolutionary. Writing in a recent article, she noted that “only people who view willpower as limited and easily depleted exhibited improved self-­control after sugar consumption. In contrast, people who view willpower as plentiful showed no benefits from glucose—­they exhibited high levels of self-­control performance with or without sugar boosts.”

The italics are mine, and I hope you can see why! The mere belief that willpower is limited sensitizes people to bodily cues for fuel—­that devilish afternoon snack!—­and that makes them dependent on glucose boosts for high self-­control. In contrast, as Dweck explained, “People who didn’t think willpower was limited didn’t show a depletion effect after a strenuous task and didn’t need sugar to keep going strong. Those people may feel fatigued, but they don’t think that means they can’t work hard. Our findings suggest that what has been viewed as a basic biological process is really a product of people’s beliefs.”

A basic biological process is really a product of people’s beliefs? Amazing!

You might relate to an even more pointed explanation—­one that accounts for a lot of things that happen during weight loss and control. “When you have a limited theory of willpower,” Professor Dweck said, “you’re constantly on alert, constantly monitoring yourself. ‘Am I tired? Am I hungry? Do I need a break? How am I feeling?’ And at the first sign that something is flagging, you think, I need a rest or a boost.”

Which pretty well sums up the major hurdle of dieters everywhere: if you believe that you need certain external things to help you exercise self-­control (or that you need certain kinds of foods to help you stay focused, calories be damned), you will not really believe it’s possible to override your body’s biology. So . . . believe! When it comes to willpower, it really matters!

Now comes the burning question: What does it take to change your mindset? To use the earlier math example, it turns out you can change a kid’s view of his or her math ability by regularly and repeatedly talking about math ability as something that is built up through practice and effort instead of something you’re born with (and praising the effort that goes into getting those improved grades). And if you’re a sports fan, you know that an athlete’s repeated and practiced visualization of an improved game is a key component of making that visualization a reality.

Bob Harper is a world-renowned fitness trainer and the longest-reigning star of the NBC reality series The Biggest Loser, which has run for sixteen seasons, and counting. He has released several popular fitness DVDs and is the #1 New York Times bestselling author of The Skinny Rules, Skinny Meals, and Jumpstart to Skinny. Harper lives in Los Angeles.

Greg Critser is a longtime science and medical journalist. The co-author of Bob Harper’s The Skinny Rules and Jumpstart to Skinny, Critser is also the author of the international bestseller Fat Land: How Americans Became the Fattest People in the World. He lives in Pasadena, California.

The 6 Secrets of Thin People 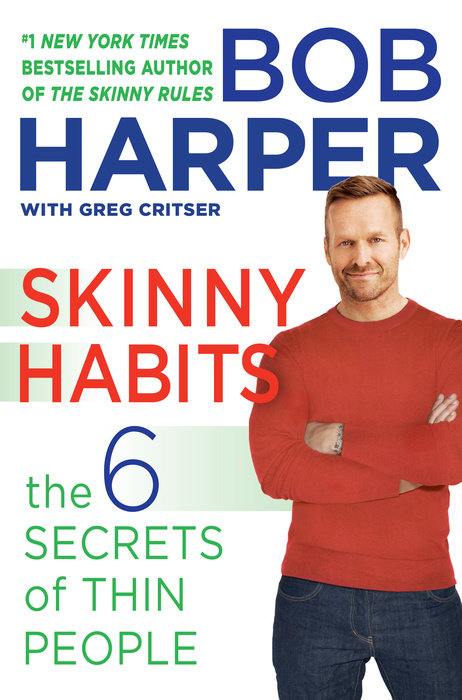