Some Thoughts on Kindness

NEW YORK TIMES BESTSELLER • This inspiring meditation on kindness from the author of Lincoln in the Bardo is based on his popular commencement address.

Three months after George Saunders gave a graduation address at Syracuse University, a transcript of that speech was posted on the website of The New York Times, where its simple, uplifting message struck a deep chord. Within days, it had been shared more than one million times. Why? Because Saunders’s words tap into a desire in all of us to lead kinder, more fulfilling lives. Powerful, funny, and wise, Congratulations, by the way is an inspiring message from one of today’s most influential and original writers.

Praise for Congratulations, by the way

“As slender as a psalm, and as heavy.”—The New York Times

“The graduating college senior in your life probably just wants money. But if you want to impart some heartfelt, plainspoken wisdom in addition to a check, you can't do much better than [Congratulations, by the way].”—Entertainment Weekly

“The loving selflessness that [George Saunders] advises and the interconnectedness that he recognizes couldn’t be purer or simpler—or more challenging.”—Kirkus Reviews

An excerpt from Congratulations, by the way

DOWN THROUGH THE AGES, a traditional form has evolved for this type of speech, which is: Some old fart, his best years behind him, who over the course of his life has made a series of dreadful mistakes (that would be me), gives heartfelt advice to a group of shining, energetic young people with all of their best years ahead of them (that would be you).
And I intend to respect that tradition.

Now, one useful thing you can do with old people, in addition to borrowing money from them or getting them to do one of their old-time “dances,” so you can watch while laughing, is ask, “Looking back, what do you regret?” And they’ll tell you. Sometimes, as you know, they’ll tell you even if you haven’t asked. Sometimes, even when you’ve specifically requested that they not tell you, they’ll tell you. So: What do I regret? Being poor from time to time? Not really. Working terrible jobs, like “knuckle-puller in a slaughterhouse”? (And don’t even ask what that entails.) No. I don’t regret that.

Skinny-dipping in a river in Sumatra, a little buzzed, and looking up and seeing like three hundred monkeys sitting on a pipeline, pooping down into the river, the river in which I was swimming, with my mouth open, naked? And getting deathly ill afterward, and staying sick for the next seven months? Honestly, no. Do I regret the occasional humiliation? Like once, playing hockey in front of a big crowd, including this girl I really liked, I somehow managed, while falling and emitting this weird whooping noise, to score on my own goalie, while also sending my stick flying into the crowd, nearly hitting that girl? No. I don’t even regret that.

But here’s something I do regret:

In seventh grade, this new kid joined our class. In the interest of confidentiality, her Convocation Speech name will be “ELLEN.” ELLEN was small, shy. She wore these blue cat’s-eye glasses that, at the time, only old ladies wore. When nervous, which was pretty much always, she had a habit of taking a strand of hair into her mouth and chewing on it.

So she came to our school and our neighborhood and was mostly ignored, occasionally teased. (“Your hair taste good?”—that sort of thing.) I could see this hurt her. I still remember the way she’d look after such an insult: eyes cast down, a little gut-kicked, as if, having just been reminded of her place in things, she was trying, as much as possible, to disappear. After a while she’d drift away, hair strand still in her mouth. At home, I imagined, after school, her mother would say, you know, “How was your day, sweetie?” and she’d say, “Oh, fine.” And her mother would say, “Making any friends?” and she’d go, “Sure, lots.”

Sometimes I’d see her hanging around alone in her front yard, as if afraid to leave it.

And then—they moved. That was it. No tragedy, no big final hazing.

Now, why do I regret that? Why, forty-two years later, am I still thinking about it? Relative to most of the other kids, I was actually pretty nice to her. I never said an unkind word to her. In fact, I sometimes even (mildly) defended her.

But still. It bothers me.

George Saunders is the author of nine books, including the novel Lincoln in the Bardo, which won the Man Booker Prize, and the story collections Pastoralia and Tenth of December, which was a finalist for the National Book Award. He has received fellowships from the Lannan Foundation, the American Academy of Arts and Letters, and the Guggenheim Foundation. In 2006 he was awarded a MacArthur Fellowship. In 2013 he was awarded the PEN/Malamud Award for Excellence in Short Fiction and was included in Time’s list of the one hundred most influential people in the world. He teaches in the creative writing program at Syracuse University.

Some Thoughts on Kindness 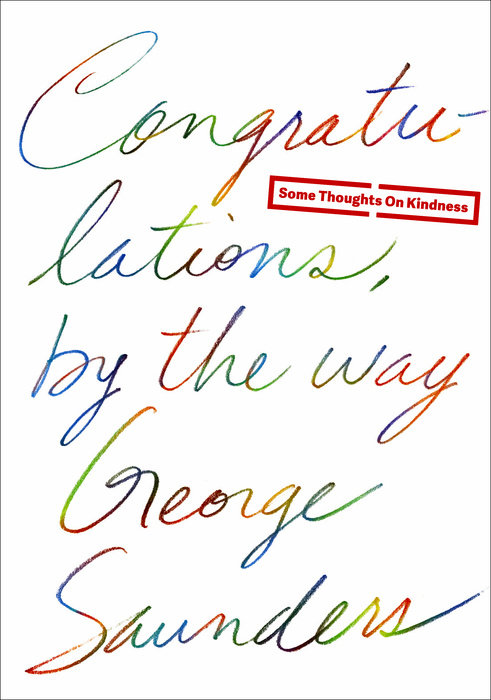