“Witness the coming together of Truman Capote’s voice, the electric-into-neon blaze that is surely one of the premier styles of postwar American literature.”—The Washington Post Book World

“A great breezy read . . . with Capote’s trademark wit, but also with genuine youthful awe at the exhilaration of late-forties New York.”—New York

A lost treasure only recently found, Truman Capote’s Summer Crossing is a precocious, confident first novel from one of the twentieth century’s greatest writers.

Set in New York just after World War II, the story follows a young carefree socialite, Grady McNeil, whose parents leave her alone in their Fifth Avenue penthouse for the summer. Left to her own devices, Grady turns up the heat on the secret affair she’s been having with a Brooklyn-born Jewish war veteran who works as a parking lot attendant. As the season passes, the romance turns more serious and morally ambiguous, and Grady must eventually make a series of decisions that will forever affect her life and the lives of everyone around her.

An excerpt from Summer Crossing

“You are a mystery, my dear,” her mother said, and Grady, gazing across the table through a centerpiece of roses and fern, smiled indulgently: yes, I am a mystery, and it pleased her to think so. But Apple, eight years older, married, far from mysterious, said: “Grady is only foolish; I wish I were going with you. Imagine, Mama, this time next week you’ll be having breakfast in Paris! George keeps promising that we’ll go . . . I don’t know, though.” She paused and looked at her sister. “Grady, why on earth do you want to stay in New York in the dead of summer?” Grady wished they would leave her alone; still this harping, and here now was the very morning the boat sailed: what was there to say beyond what she’d said? After that there was only the truth, and the truth she did not entirely intend to tell. “I’ve never spent a summer here,” she said, escaping their eyes and looking out the window: the dazzle of traffic heightened the June morning quiet of Central Park, and the sun, full of first summer, that dries the green crust of spring, plunged through the trees fronting the Plaza, where they were breakfasting. “I’m perverse; have it your own way.” She realized with a smile it was perhaps a mistake to have said that: her family did come rather near thinking her perverse; and once when she was fourteen she’d had a terrible and quite acute insight: her mother, she saw, loved her without really liking her; she had thought at first that this was because her mother considered her plainer, more obstinate, less playful than Apple, but later, when it was apparent, and painfully so to Apple, that Grady was finer looking by far, then she gave up reasoning about her mother’s viewpoint: the answer of course, and at last she saw this too, was simply that in an inactive sort of way, she’d never, not even as a very small girl, much liked her mother. Yet there was little flamboyancy in either attitude; indeed, the house of their hostility was modestly furnished with affection, which Mrs. McNeil now expressed by closing her daughter’s hand in her own and saying: “We will worry about you, darling. We can’t help that. I don’t know. I don’t know. I’m not sure it’s safe. Seventeen isn’t very old, and you’ve never been really alone before.”

Mr. McNeil, who whenever he spoke sounded as though he was bidding in a poker game, but who seldom spoke in any event, partly because his wife did not like to be interrupted and partly because he was a very tired man, dunked out a cigar in his coffee cup, causing both Apple and Mrs. McNeil to wince, and said: “When I was eighteen, why hell, I’d been out in California three years.”

“What’s the difference?” he grunted. “There has been no difference between men and women for some while. You say so yourself.”

As though the conversation had taken an unpleasant turn, Mrs. McNeil cleared her throat. “It remains, Lamont, that I am very uneasy in leaving—”

Rising inside Grady was an ungovernable laughter, a joyous agitation which made the white summer stretching before her seem like an unrolling canvas on which she might draw those first rude pure strokes that are free. Then, too, and with a straight face, she was laughing because there was so little they suspected, nothing. The light quivering against the table silver seemed to at once encourage her excitement and to flash a warning signal: careful, dear. But elsewhere something said Grady, be proud, you are tall so fly your pennant high above and in the wind. What could have spoken, the rose? Roses speak, they are the hearts of wisdom, she’d read so somewhere. She looked out the window again; the laughter was flowing up, it was flooding on her lips: what a sparkling sun-slapped day for Grady McNeil and roses that speak!

“Why is that so funny, Grady?” Apple did not have a pleasant voice; it suggested the subvocal prattlings of an ill-natured baby. “Mother asks a simple question, and you laugh as though she were an idiot.”

“Grady doesn’t think me an idiot, surely not,” said Mrs. McNeil, but a tone of weak conviction indicated doubt, and her eyes, webbed by the spidery hat-veil she now lowered over her face, were dimly confused with the sting she always felt when confronted by what she considered Grady’s contempt. It was all very well that between them there should be only the thinnest contact: there was no real sympathy, she knew that; still, that Grady by her remoteness could suggest herself superior was unendurable: in such moments Mrs.

McNeil’s hands twitched. Once, but this had been a great many years ago and when Grady was still a tomboy with chopped hair and scaly knees, she had not been able to control them, her hands, and on that occasion, which of course was during that period which is the most nervously trying of a woman’s life, she had, provoked by Grady’s inconsiderate aloofness, slapped her daughter fiercely. Whenever she’d known afterwards similar impulses she steadied her hands on some solid surface, for, at the time of her previous unrestraint, Grady, whose green estimating eyes were like scraps of sea, had stared her down, had stared through her and turned a searchlight on the spoiled mirror of her vanities: because she was a limited woman, it was her first experience with a will-power harder than her own. “Surely not,” she said, twinkling with artificial humor.

“I’m sorry,” said Grady. “Did you ask a question? I never seem to hear anymore.” She intended the last not so much as an apology as a serious confession.

“Really,” twittered Apple, “one would think you were in love.”

There was a knocking at her heart, a sense of danger, the silver shook momentously, and a lemon-wheel, half-squeezed in Grady’s finger, paused still: she glanced swiftly into her sister’s eyes to see if anything were there that was more shrewd than stupid. Satisfied, she finished squeezing the lemon into her tea and heard her mother say: “It is about the dress, dear. I think I may as well have it made in Paris: Dior or Fath, someone like that. It might even be less expensive in the long run. A soft leaf green would be heaven, especially with your coloring and hair—though I must say I wish you wouldn’t cut it so short: it seems unsuitable and not—not quite feminine. A pity debutantes can’t wear green. Now I think something in white watered silk—”

Grady interrupted her with a frown. “If this is the party dress, I don’t want it. I don’t want a party, and I don’t intend to go to any, not those kind at any rate. I will not be made a fool.”

Grady was silent some moments; she knew the others were not as calm as they seemed: they were waiting again for her to act up, which proved with what inaccuracy they observed her, how unaware they were of her recent nature. A month ago, two months ago, if she had felt her dignity so intruded upon, she would have rushed out and roared her car onto the port road with the pedal flat on the floor; she would have found Peter Bell and cut the mischief in some highway tavern; she would have made them worry. But what she felt now was a genuine disinvolvement. And to some extent a sympathy with Lucy’s ambitions. It was so far off, a summer away; there was no reason to believe it would ever happen, a white silk dress, and the orchestra the Bells had had for Harriet. While Mr. McNeil paid the check, and as they crossed the dining-room, she held Lucy’s arm and with a coltish awkwardness gave her cheek a delicate spontaneous peck. It was a gesture that had the sudden effect of unifying them all; they were a family: Lucy glowed, her husband, her daughters, she was a proud woman, and Grady, for all her stubborn oddness was, let anyone say whatever they would, a wonderful child, a real person. “Darling,” Lucy said, “I’m going to miss you.”

Apple, who was walking ahead, turned around. “Did you drive your car in this morning, Grady?”

Grady was slow in answering; lately everything Apple said seemed suspicious; why care, really? What if Apple did know? Still, she did not want her to. “I took the train from Greenwich.”

“Then you left the car at home?”

“Why, does it make any difference?”

“No; well, yes. And you needn’t bark at me. I only thought you could drive me out on the Island. I promised George I’d stop by the apartment and pick up his encyclopedia—such a heavy thing. I’d hate to carry it on the train. If we got there early enough you could go swimming.”

Truman Capote was born September 30, 1924, in New Orleans. After his parents’ divorce, he was sent to live with relatives in Monroeville, Alabama. It was here he would meet his lifelong friend, the author Harper Lee. Capote rose to international prominence in 1948 with the publication of his debut novel, Other Voices, Other Rooms. Among his celebrated works are Breakfast at Tiffany’s, A Tree of Night, The Grass Harp, Summer Crossing, A Christmas Memory, and In Cold Blood, widely considered one of the greatest books of the twentieth century. Twice awarded the O. Henry Short Story Prize, Capote was also the recipient of a National Institute of Arts and Letters Creative Writing Award and an Edgar Award. He died August 25, 1984, shortly before his sixtieth birthday. 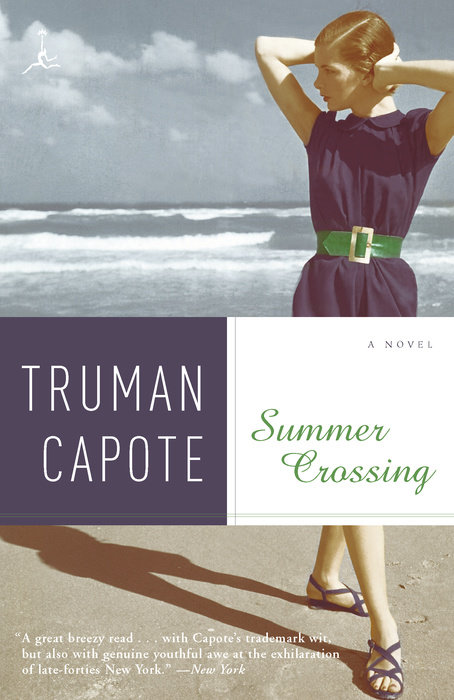