Grow Tons of Organic Vegetables in Tiny Spaces and Containers

To accommodate today's lifestyles, a garden needs to fit easily into a very small plot, take as little time as possible to maintain, require a minimum amount of water, and still produce prolifically. That's exactly what a postage stamp garden does. Postage stamp gardens are as little as 4 by 4 feet, and, after the initial soil preparation, they require very little extra work to produce a tremendous amount of vegetables--for instance, a 5-by-5-foot bed will produce a minimum of 200 pounds of vegetables.

When first published 40 years ago, the postage stamp techniques, including closely planted beds rather than rows, vines and trailing plants grown vertically to free up space, and intercropping, were groundbreaking. Revised for an all new generation of gardeners, this edition includes brand new information on the variety of heirloom vegetables available today and how to grow them the postage stamp way.

Now, in an ever busier world, the postage stamp intensive gardening method continues to be invaluable for gardeners who wish to weed, water, and work a whole lot less yet produce so much more.

An excerpt from The Postage Stamp Vegetable Garden

Introduction
It’s a beautiful day. There’s not a cloud in the sky. The temperature is in the mid-80s. And there you are in your backyard, picking loads of vegetables from your own small garden tucked away in the corner of your property. Tomatoes, onions, corn, beans, you’ve grown them all—in fact, more than you ever dreamed possible from such a small space.
Impossible?

Of course not. That’s exactly what a postage stamp garden is intended to do and what you will learn to do in the next several chapters. The techniques outlined here allow you to double or triple the quantities of vegetables you might normally grow in any given space.

The history of this incredible gardening system began in the 1890s. Outside Paris, a few enterprising Frenchmen began raising crops using a new method they discovered. Over their land they spread an 18-inch layer of manure (plentiful in the day of the horse and buggy) and planted their vegetables so close together in this rich material that the leaves touched one another as the plants grew. Under this carpet of leaves, the ground remained moist, warm, and vigorous. During periods of frost, they set glass jars over the tiny plants to give them an early start. So good were the Frenchmen in devising fresh ways of growing things that they were able to produce nine crops a year. Such was the birth of the French Intensive method of gardening, an early form of what we now call intensive, or wide-row, gardening.

In the following two decades, another organic gardening movement developed. In Switzerland, a remarkable philosopher from Austria, Rudolf Steiner, and his followers invented a gardening method called biodynamic.

They emphasized the exclusive and balanced use of organic fertilizers—composted leaves, grass, manure, and so on. They investigated what is now called companion planting and found that certain plants, when grown together (like beans and cabbages), do better than others (like beans and onions). They also sought new ways of arranging crops. These biodynamic gardeners hit upon the idea of planting in mounded beds that permitted adequate drainage and that were narrow enough so that a person didn’t have to walk over them.

Between the 1930s and the 1960s, an Englishman, Alan Chadwick, set out to combine the French Intensive and biodynamic methods and add to them various ideas of his own, such as planting by the phases of the moon. In the 1960s he brought his meld of techniques to America, to the 4-acre Garden Project at the University of California at Santa Cruz. The acreage that he was given had “impossible” soil, in which even weeds failed to grow. In one season, using simple hand tilling and organic materials, Chadwick and his students brought the acreage to fertility. In a few seasons they had the richest, most beautiful gardens around.

The intensive method that Chadwick and his students used produced four times as many vegetables as a conventional garden using standard rows. It also used half the water and took less time to maintain. And the vegetables were wonderfully plump, tasty, and nutritious.
Chadwick’s method, which came to be known as French Intensive Biodynamic Gardening, has proved to be perfectly adapted to small-space gardening. Using intensive methods, you can, for instance, grow as many carrots in 1 square foot as you can in a 12-foot row in a conventional garden. Properly handled, a 25-square-foot bed (5 by 5 feet) will produce a minimum of 200 pounds of vegetables.

To accommodate today’s lifestyles, a garden needs to fit easily into a very small plot, take as little time as possible to work, require a minimum amount of water, and still produce prolifically. By combining the intensive methods with small-space innovations like vertical gardening and other crop-stretching techniques, that’s exactly what a postage stamp garden does.

Postage stamp gardens are small. The smallest beds I recommend are 4 by 4 feet, the largest, 10 by 10 feet. Regardless of which size you choose, your garden will produce a tremendous amount of vegetables and, after the initial preparation, require little extra work, even less if you let an automatic drip system do the watering. The principles of postage stamp gardening are:

Start with an initial super-boosting postage stamp soil mix. This allows you to produce a greater quantity of vegetables in a much smaller space.
Plant the vegetables very closely together to save space, reduce watering, eliminate weeds, and create a healthier microclimate for your plants.
Utilize “crop-stretching” techniques such as intercropping, succession planting, catch crops, and vertical gardening to pack in as many vegetables as possible in a limited space.
Water deeply and regularly, but infrequently.
Use organic methods, including companion planting, to keep your garden and the food you eat healthy and safe.

When this book was first published in 1975, these concepts were unusual and revolutionary in the home garden. Since that time, there have been many imitators and variations, but the postage stamp method has stood the test of time. With more than half a million copies sold, this book has helped people of all gardening levels successfully grow many more vegetables in very tiny spaces.

This new edition is fully revised and now contains information on heirloom seed varieties. Heirloom varieties not only produce excellent results, but you can also save the seeds for the next season to guarantee the same vegetable as the parent plant. Because heirloom vegetables are living artifacts of history, these old-time varieties offer a glimpse of earlier times when vegetables were known and grown for their flavor.

The Postage Stamp Vegetable Garden offers simple, easy techniques that work. I hope you will try the postage stamp methods in your garden, and then experiment on your own. Get ready to plant. Whether you plant hybrid varieties or grow heirlooms, you will soon be able to enjoy the fruits of your labor.

Karen Newcomb has contributed to and co-written eight gardening books with her late husband, Duane. She is a lifetime vegetable gardener,  garden blogger, and avid writer, and has been a writing teacher for more than twenty years. She lives in Rocklin, California.

Grow Tons of Organic Vegetables in Tiny Spaces and Containers 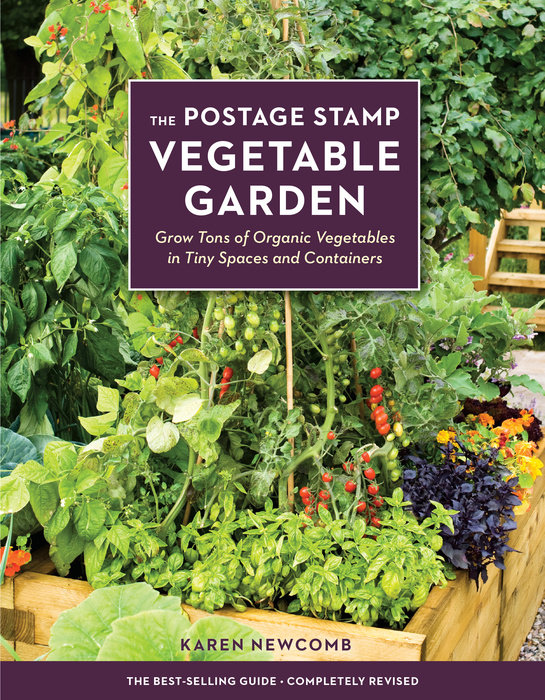