From the cult-favorite author of Blackwater Lights comes the finale to a dark paranormal horror trilogy in the cosmic horror vein of H. P. Lovecraft.

The world is collapsing. Governments have fallen, and anarchy reigns. Yet a greater danger looms imprisoned in ancient objects from distant space: bodiless aliens with an all-consuming thirst for freedom . . . and human blood.

They have a strong ally in Lily, a powerful sorceress and leader of a globe-spanning cult. In an isolated compound deep in the frozen north, Lily cultivates a group of children whose paranormal abilities can be harnessed to unleash the alien apocalypse. Now she has acquired the final pieces to the puzzle: a gifted young boy named William and his mother, Ellen, whose safety is the bargaining chip Lily needs to compel the child’s obedience.

Once again, William and Ellen’s last hope is Ray Simon. Every time Ray and Lily have crossed paths, she has come out on top, and even now she is one step ahead. But this time Ray is not alone. Accompanied by Claire and Mantu—devotees of the enigmatic Brotherhood of Eleusis, who possess psychic abilities of their own—Ray sets off on a desperate mission of rescue and revenge. Only the fate of humanity itself hangs in the balance.

“Disturbing, surreal, and spooky as hell, Blackwater Lights is a brilliantly written debut, marking Michael M. Hughes as a talent to watch.”—Tim Lebbon, author of Coldbrook and the Toxic City trilogy

“Blackwater Lights has action, adventure, sex, love, designer drugs, and violent death, all woven into a globe-spanning paranormal conspiracy. I mean, really, what’s not to like? Consider this my official request for a sequel.”—F. Paul Wilson, author of the Repairman Jack novels and The Adversary Cycle

“Blackwater Lights is a paranoid thrill-ride that deftly combines mystery, sci-fi, and horror elements into a modern-day conspiracy tale.”—Cemetery Dance

An excerpt from Demon Lights

Ray walked alone through the woods.

He was dreaming; that he knew. It was the same dream every time, and yet despite knowing it, he couldn’t wake up, and he had long since given up trying. The nightmare had its own logic, its own rules. He was its captive until it was finished with him.

Ahead of him, in the clearing, was the gnarled, sharp rock formation the Blackwater locals called the Hand, each finger casting long shadows from a fire burning within it. In the center of the grasping stone circle, as always, bound and naked on a stone slab and illuminated by the flames, was Ellen.

Every time he saw her his heart broke all over again.

Behind her, in a deep red robe that hung to the dirt, stood Lily. She held up an obsidian knife that flashed in the firelight and her bright red lips curved in a smile. “So happy to see you again, Ray,” she said, grasping the haft of the blade in both hands and raising it above Ellen’s bare flesh. “But we really should stop meeting like this.”

He tried to call out, but his mouth was frozen, the words stuck in his throat.

Lily laughed, a shrill witch-screech that cut into his guts. “He’s a little too late, my dear Ellen,” she said. She winked. “He’s always too late. Aren’t you, my love?”

“Ray?” Ellen’s voice slurred. “Where are you?” Her eyelids opened, but her eyes were glassy and sightless.

“Shh,” Lily whispered. “This will only hurt a little bit.”

Ray tried to run toward them but felt a chain bite into his neck. Always the chain holding him back. Nothing ever changed. He knew what she would say next.

Please, no, not this time, not again.

“See you soon,” Lily said. She muttered something guttural beneath her breath then brought the knife higher.

“Goodnight, Ellen. I’m sorry to say your prince has failed you again.”

The blade came down. As he heard Ellen’s anguished cry, the flames exploded, searing his vision.

And then he was somewhere else, lying on his back in a dark, tiny hut. The fire here came from a tiny woodstove, the smoke curling through branches and leaves hanging from the low ceiling. An old woman with a cloudy eye leaned over him. Sabina, the curandera. Her breath smelled like spoiled milk. And even though he was dreaming, he felt the dark, potent surge of the hallucinogenic mushrooms she had fed him, sparks of energy from his bones to the ends of his nerve cells. He tasted blood—the blood of a dove from the potion she had forced down his throat. To take away the poison eating away at his soul. Poison against poison.

She laughed. Quietly at first, then in hissing bursts. Her rotten breath made him gag. And then he felt the pain, like fire, in his hand. Despite knowing what was coming, when he held up his hand and saw the missing ring finger, and the torn, bloody nub where it used to be, he began to scream.

Sabina held up his amputated finger. Wiggled it like a worm.

“Ray.” Ellen again. Calling to him from darkness. “Ray, please help me. She’s going to kill me. Can you hear me? She has William, too. I’m afraid for him. Please, you need to come now. Ray? Ray?”

A woman stood above him. Pretty, with an angular face and black hair piled high on her head. She was wearing the standard Brotherhood white unisex pants and shirt. It took him a moment to realize where he was. Not in Blackwater, not in Guatemala, not in any of the dozens of places he’d stayed while on the run.

“Ray, are you feeling okay?”

He had fallen asleep in a lounge chair in the gardens of Eleusis while watching a group of children splashing in the main pool. It was late afternoon, and the shadows of the trees were lengthening, but it was still hot, and he’d been dropping in and out of a lethargic, sweaty slumber before the nightmare overtook him.

“Yeah,” he said. He was still trembling.

The woman eyed him curiously. “I’m Claire. One of the Council.” She had a British accent.

Ray held out his hand. She shook it firmly. “Nice to meet you, Claire.”

Her gaze burned into him. “Bad dream?”

He sat up and ran his fingers through his hair. “Was I mumbling or something?”

He waved his hand. “Nothing major.”

Michael M. Hughes lives in Baltimore with his wife and two daughters. He writes fiction and nonfiction. When he’s not writing, Hughes speaks on Forteana, the paranormal, psychedelia, pop culture, and other topics, and teaches regular workshops on magic and the tarot. 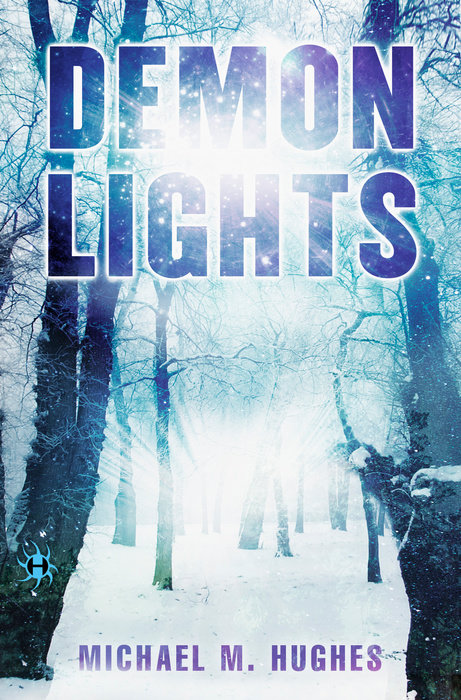