In this touching novel by New York Times bestselling author Nancy Thayer, a young woman’s search for fulfillment on Nantucket leads her to a mysterious manuscript and a life-changing friendship. Now available for the first time as an eBook!

When Sara marries Steve Kendall, she leaves Boston behind and the newlyweds move to his native Nantucket. Though Sara loves the gorgeous island, she is less than thrilled with her husband’s friends, a tight-knit group that leaves her feeling left out. Trying unsuccessfully to have a baby, Sara’s only solace comes from her work as a freelance editor.

When she stumbles upon several provocative pages mixed in with one of her manuscripts, she becomes determined to track down the reclusive author. Fanny Anderson has been writing romance novels for years, hiding away in her huge Cambridge house. After Sara insists on meeting Fanny, the two begin a fruitful collaboration and a profound friendship. As their work progresses, however, a secret from Fanny’s past is revealed—inspiring Sara to try and make both their dreams come true.

An excerpt from Morning

When she awoke, his hand was already under her nightgown, on her breast.

“Steve,” she said, stretching, rolling her body to face him.

“Good morning,” he said. “Sara.” He spoke into her neck, her name coming on his breath as if it were a word of praise, or need. He lifted her nightgown higher, so that it bunched up around her hips.

She rose, shivering in the cold house, and hurried off. She hurried back, not pausing even to brush her teeth. They were so married, they were like animals. Every bodily smell was aphrodisiacal. She wore perfume now only to treat herself; for Steve she washed off all scent but her own.

The bed with its homely flannel sheets was deep and warm and receptive. Once under the covers, she raised her arms to pull her nightgown over her head and off. She tossed it onto the floor. Steve already had his T-shirt off, and she nuzzled against his chest, foraging into his prickly hair, his sweet sweaty smells. Foraging—to search for what one needs—and she found it, and raised herself up over her husband. With his hands he pulled the sheet up around her back and shoulders, holding it there to keep off the chill until she grew hot from her laboring against him and with one quick movement shoved it away. When finally she fell against him, he pulled the covers up again, and stroked her back beneath the warm quilt as she calmed down. Around her forehead her hair and even behind her kneecaps her skin was sticky with sweat.

Between her legs she was sopping, and she lay against her husband, so intimately, as close to him as his skin, and yet in her own female way as far away from him as the moon, thinking of those fluids now, almost listening to those fluids: his, and hers, from this morning’s love—and what else? What else.


While Steve showered, she made breakfast for him, eggs and bacon and toast and honey, because he worked as a carpenter and needed the calories. There had been a frost last night, but golden chrysanthemums and a few pale, summer-pink roses still bobbed brightly against the stone wall at the back of their yard. The five maples that towered along the fenceline blazed, but beneath them summer’s pink impatiens broke upward through the russet leaves that layered the ground. All that triumphant, spectacular nature made Sara smile. She thought she had a secret.

She had turned up the thermostat when she came downstairs and now the furnace came on, filling the kitchen with warmth as the coffeepot filled the air with its tantalizing aroma. She inhaled deeply. God, she was such an aroma-nut she should hunt for truffles like a pig. Or root around for drugs at airports. She laughed out loud at the thought.

“What’s so funny?” Steve asked, coming into the kitchen, all fresh and clean, his blond hair still damp.

Her heart kicked like the furnace, with a forceful thump, just to see him. After two years of marriage, the sight of him still moved her to her depths.

“Oh, nothing. Everything. It’s such a beautiful day,” she said, going to him for a hug.

“You’re such a beautiful lay,” he said.

They sat across from each other at the kitchen table. Another ordinary day, Sara thought, smiling to herself—but then again, maybe not. She looked down at her lonely cup of coffee and pitiful grapefruit half, then over at Steve’s abundant plate where salty bacon curled seductively, waving at her. She grabbed up a letter she’d tossed onto the table the day before and began to read it again, just to keep her hands off that bacon.

“A letter from Julia,” Sara said. Julia was her best friend, her direct line to Boston, her safety valve and counselor. “Listen to this, I meant to read it to you Saturday when it arrived. She’s such a nut. She’s been digging little tidbits up for me from the BU library. This is from Frazer’s Golden Bough.

“ ‘In the county of Bekes, in Hungary, barren women are fertilized by being struck with a stick which has first been used to separate pairing dogs.’ ”

“I don’t know,” Sara said, laughing. “There are lots of dogs on Nantucket.”

“And I’d have to beat you with a stick which has separated the mating dogs? Sounds a little kinky to me.” Steve paused, then grinned across the table at her. “All right, I’ll do it. I think I could really get into it.”

Steve rose and pulled his grubby red vest over his tattered but clean flannel shirt. “I’ve got to go now or I’ll be late.” He leaned over and nuzzled the back of Sara’s neck. “Sorry I can’t stay here and beat you with my stick.”

Sara turned in her chair and their lips met. They smiled at each other when he straightened.

“See you later,” he said. Then, at the door, he paused. “Meet me at the Atlantic Café tonight about five, okay? It’s Mick’s birthday and the group’s going to get together.”

“Oh, sure,” Sara said, feigning enthusiasm. “Fine. Well—do you want me to pick up a present for Mick? Something funny?”

“I don’t think so, hon. Mick will be happy if we just sing happy birthday and buy him a few beers.”

“All right. See you then.” Sara looked back down at Julia’s letter.

“Of course you’re feeling crazy,” Julia had written. “If you didn’t feel crazy now, I’d think you really were. I mean, in the first place, you gave up all the power and prestige and a carpeted office and your name carved in wood on your door at Walpole and James to follow your true love, just like Annie Oakley in a dinghy, across the ocean to live on an island that has fewer people than a shopping mall parking lot. And Nantucket is Steve’s territory—nobody knows you and everyone knows Steve—some quite a bit better than others, which has got to be a little wearing now and then. Now you say you want an instant baby? I don’t know. I think this calls for one of our all-night alcoholic powwows in front of my fireplace. Perhaps all that sea air has clogged your brain. Though you know I wish you well.”

Something about her friend’s letter irritated Sara. “That’s not fair!” she said aloud, to Julia, who was at this moment across the ocean in her Back Bay apartment getting poshed up for a day at her art gallery on Newberry Street. “One year is not exactly instant!”

Sara tossed the letter aside and rose, restless with her thoughts. Children had been in their plans from the start. When she and Steve moved to Nantucket a year ago, they bought a house with an extra bedroom—for the children. Sara had been glad to give up her position at Walpole and James and start freelance editing because she knew that kind of work would be more suited to a life with children. Julia knew all that. She knew Sara’s life every step of the way. “Instant baby” was really not fair.

It was true, though, that it had never occurred to Sara that there wouldn’t be an instant baby—not after all the years she had spent guarding against one. The first few months, she had been just simply amazed, each time her period started, as if something really bizarre had happened.

When the sixth month of not using birth control and still not getting pregnant rolled around, Sara had become scientific and efficient. She went to see a gynecologist. He had laughed at her worries—actually laughed. “You’ve only been trying six months,” he said after giving her a pelvic exam. “The average time—the average—it takes a woman to get pregnant is three and a half months. That includes all the young teenagers who get knocked up just thinking about sex. You’re a perfectly healthy young woman, you’re only thirty-four, you’ve got lots of time. Just go home and relax and screw a lot.”

Sara had been shocked that a doctor would say “screw.” Now, six months later, when she was beginning to worry about herself, she wondered if her reaction to the word “screw” hadn’t been puritanical, indicating some deep inner prudishness that was keeping her from getting pregnant. She’d have to mention that to Julia. Or was she overanalyzing?

If only Julia were here, where she could talk with her every day. Sara was certain that she and Steve were as close as any man and woman could be, but he couldn’t talk about the juicy female things that she talked about with her women friends in Boston. And he seemed baffled by her increasing fears about her fertility. Well, she was baffled, too. Fate before had always been so kind. Her achievements had not been effortless—she had always worked hard—but she had never before met with this kind of repeated failure. 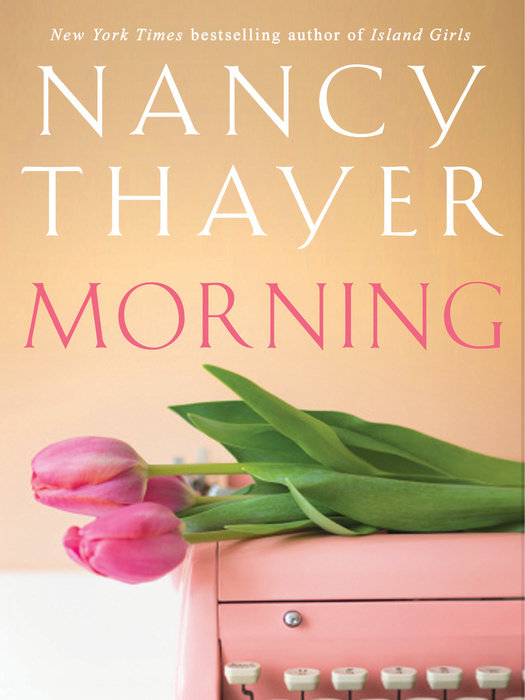